Here we are Monday afternoon, been a right old dreich stormy day. Hurricane Bertha passing through. We had a yacht in ‘Janet MacAurthur’ from Skye Yachts I think but he left in the middle of the day. He was the 407th yacht this year that visited us. Do not know where he went? But the Coastgaurd has not been out so I guess he is ok. Every summer for the last 12 years we have averaged 390 yacht/boat visits per season, and on the 8th of August we passed the 400 mark. The season usually drops off around the second week in September so I am sure we will have a few more

A yacht visit constitutes an overnight stay, we only count it as one night even if they stay for more. Also we have many day visits, RIBs and other motor vessels. It has been so busy that it was a welcome forecast, storms for a few days!!

Almost every yacht visitor this year has been supportive, which is great. No real funny ones (yet) but as a reminder the ones below were into everything, goodness knows what interest my generator shed had for these two below!!!!!!!!!!!

Monday last week, Andrew and his gang left mid morning, the forecast was pretty breezy but it was a following wind and the report was of a pretty good crossing regardless of the choppy sea. So it was good to get their text that they hads arrived, we had had a lot of fun. 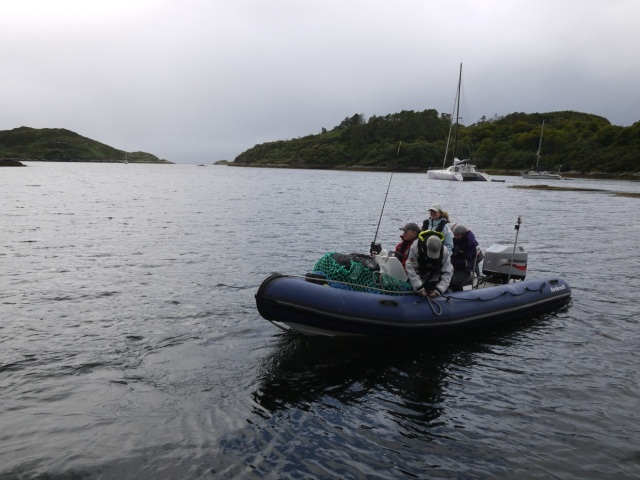 They were not away a few hours and the yachts started piling in, Ian Gordon here with his pal from Ayrshire arrived up. I have known Ian since the early days and he is one of the fast disappearing original yachties, but he would say he is not a yachtie!! He used to own Yacht Sea Rose a lovely twin masted yacht, much admired. Now sailing a smaller boat and still getting right out to the Hebridies.

Monday night Steve and his brother in law, visitors to the cottages came over. They were keen to stalk a stag, or at least see what it was about. It was late after Ian’s visit but we headed south with little hope as the Black Back gulls were good early warning systems for the deer with the racket they make. As it happened we stumbled on a young stag and very quickly carried out the stalk. It was good for a change to get a bit of luck. However, on our return to base I discovered that the cooler for the deer larder was tripping the MCB. After a bit of panic and the implications of a dead stag, humid air and a forecast of 20+ degrees next day. I dug out the old Honda genny and plugged it in. Not as sensitive as MCBs it worked fine and I finished around 12 o’clock, pretty much knackered. 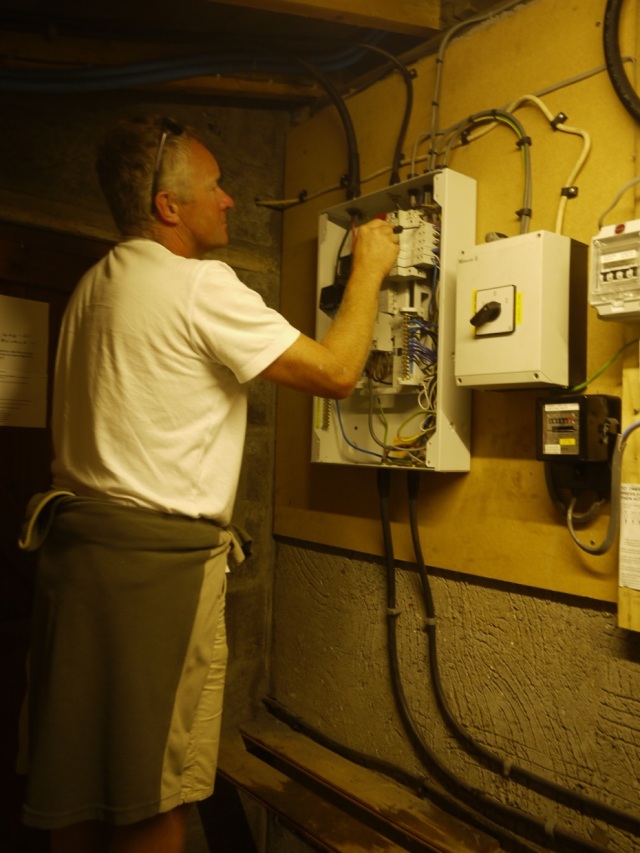 Steve from Catamaran ‘Orca’ had arrived early Monday and I knew he was from an engineering background so when he was passing I knew he would need no encouragement to get stuck in. Which was good because I was still pretty tired.

We had a good try at finding the fault but it later turned out our repair was in vain with the relpacement MCB tripping out too. So we put the 50 year old Lister I bought from a pal in Dingwall. The ex Ambulance station back up is pull start but runs on diesel and lasts a lot longer than the petrol genny. It started almost first pull after lying in the garage for years without running and way it went. Giving better power, thus better chilling, excellent.

Steve offered us a drink out on the Cat’ Orca and we did not need any encouragement. I have been invited out for a few years now but the two dogs have always brought rain and stopped the visit.

Michael and Gail from the neighbouring yacht to ‘Orca’ (and from Findhorn, regular visitors) had offered to help with the electrical problem and as it was ‘sorted’ I declined but was very grateful. I offered to show Michael the electrical set up but first he wanted to buy venison. That is when I discovered the power in the deep freeze shed was off, panic again. We went to the control panel and this time human error. I had forgot to switch back on the MCB for that side of it. No harm done but very lucky.

We had arranged for Mike and Lorraine from the cottages to join us for dinner and Steve with the promise of a ‘Happy Meal’ up at Rona Lodge needed no encouragement for our invite. We had a Tapas night but Steve was much happier with his burger and chips, Fiona did say he wasn’t hard to please!!!

After dinner we retired to the cabin for a movie and on Mikes recommendation we had a lazy hour and a half watching ‘Non Stop’ Liam Neeson, saving the world.

Cleaning Up The Sheep Shelter

We did have to wade through the sheeps calling card on our way in so next day it was a clean up job, must get a fewnce up.

The sheep are out just now helping to mow the grass and this lamb is very interested in the hens, it follows them about, maybe it thinks it is a hen.

By the end of the week the weather had started to break and by Friday it had rained a lot but fortunately in short bursts. In the middle of the day I was butchering the stag and the sheep came to join me they were pretty wet by this time and I think if I had not been in the larder they would have come in.

It  had started sunny in the morning, then very heavy rain but at the end of the day we had a spectacular sunset, although we just caught the end of it over in Big Harbour.

A Cracking End To The Day

Saturday was manic as a full changeover can be, dry thank goodness but a wee bit of shifting about. By afternoon we were getting organised, finishing off the butchering, making sausages and preparing for a visit by Adam Smith and his family. Adam had organised a trip up to Rona for his Mother’s birthday. 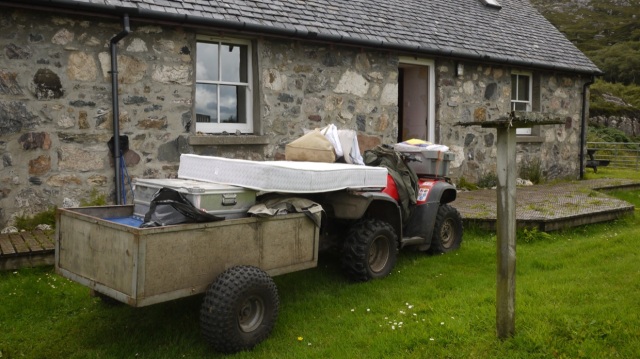 More on that one later.