Recipes, Some Old , Some New.

This page is given over to mostly traditional Scottish recipes, but certainly using local produce ingredients and whatever we have knocking about on Rona (for eating I mean).

I was thinking about the plates of Cullen Skink that I have had in restaurants and cafes around Scotland (and once in England). The various permutations from the really original to the quite plainly bizarre, given that it was an inexpensive dish in my youth it can be very expensive to-day. Although the best plate made by a cafe was in Stonehaven and one of cheapest!!!  Of course all are judged by the soup we had at home, the way Mother made it. That set me thinking (always dangerous) .  Are there any restaurants in Scotland focusing on down to earth Scottish cooking. Then I was thinking we should concentrate more on that here and on what would have been what was eaten here.

I see that Lady Claire MacDonald, Tom Kitchen and Shirley Spear lean heavily on tradition and at a very high level for sure, I guess there are many more. But our diet was wholesome, nothing fancy I would say but always full of flavour.

Of course we have much more to choose from to-day and there was for sure other ingredients bought in in the old days, there would have had to be given the climate, growing season and the desire for a more varied diet.

But where to start? Ask Julia of course! So after yet another call she sent me the following recipes. The first one, ‘Stuffed Cod’s Head’, Sounds interesting to say the least but I was assured to-day that it was delicious, a delicacy and very welcome change in the diet by Hugh our digger driver, who’s Mother cooked it for the family regularly. It is called in Gaelic:

Or Stuffed Cods Head
1 Cods head or any big fish head
Thoroughly clean the mouth and remove gills clean inside the cavity.
Now you are ready to make the stuffing or it would be better to prepare that before you started.
Stuffing:
1 teacup pinhead oatmeal
1 small onion chopped
The Cods liver if available,mother used about 4 Saith (Pollock) livers
If no liver is available, not likely in Rona!    Use 4 ozs of shredded suet
Season to taste, if you used livers probably no fluid will be needed,otherwise use a little
water to bind together.  Fish stock would be best and as you would have cooked the fish you would have that.
Now you are ready to continue.
Mix the stuffing well with a spoon or if you are not too squeamish, with your hands.
Form into the shape you require to fit inside the head,but before you put it in put a good dusting of plain flour on each end of the shaped stuffing, that should stop it coming adrift when you put it into a pot of boiling salted water  make sure the stuffing is very firmly packed into the cavity cook for usually 30mins  gentle boiling.

As told by Julia and subsequently sent by email, excellent. Must try it one day. I will report. The other thing in Scotland that is very traditional are scones, baking in general. I especially remember getting a variety of scones at a place in North Uist, from the late  Marjory MacDonald, Dusary. Every Monday when I used to deliver food stuff to Uist in a previous life. I would look forward to tasting her scones. I again asked Julia and she had her treacle scone recipe, Maize meal scones was a popular one too. I guess you would add the Maize Meal in quantity rather than the treacle?

Treacle scones:
Ingredients
8ozs  plain flour
Half teaspoon bicarb’
1 teaspoon cream of tartar
Half teaspoon mixed spice
2ozs butter or margarine
1 tablespoon black treacle
Milk to make a soft dough., but not sticky
Mother used buttermilk or sour milk, you could use milk soured by adding couple  of drops of lemon.
I think even fresh milk would do.
Now handle lightly do not use rolling pin.
Pat out into two circles about half inch thick, cut into scone size sections
Put on floured tray, in oven cook for 12 mins’ keep an eye on them as ovens vary, cool on wire tray.
Cook on gas mark 7 or its  electric equivalent.
Mother made them  on a griddle.

Both recipes as told by Julia MacKenzie. 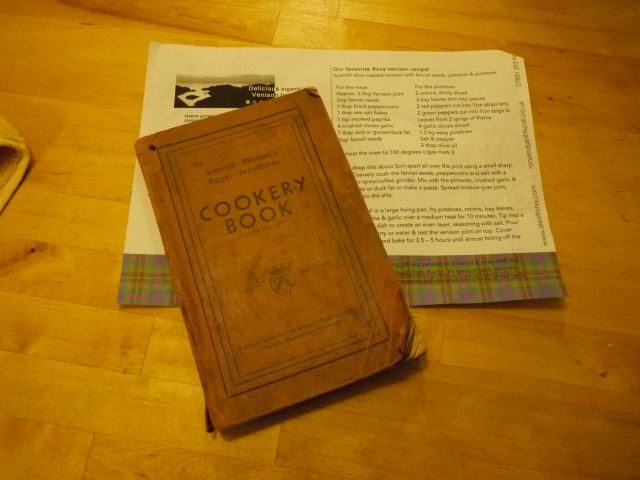 I was asking Julia about soups they used to have, broth was always on the go, in various shapes and forms. I was lamenting the fact that I was longing to taste this lentil ham and carrot type soup that I got when I was living at home, Julia had no idea when I tried to describe it. Then one day not more than a few days later I saw a reference somewhere to a SWRI Cookbook, which looked familiar and I thought, my Mother had one of these. So I ordered it up off of Amazon, it arrived I opened it at soups and there is was, the recipe (since tried, exactly the same as I had had it before). 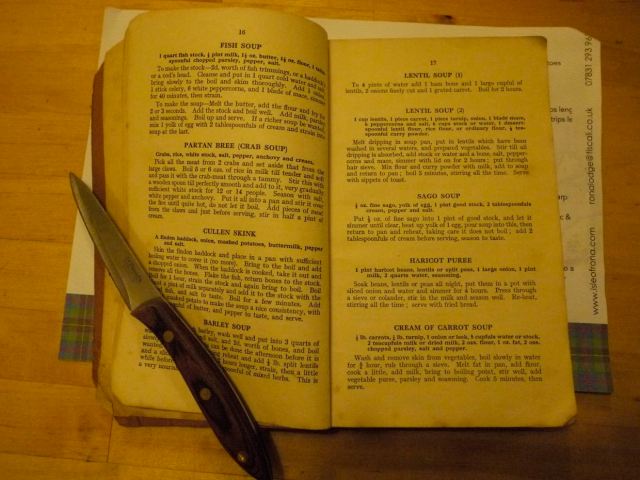 Of course a quick look through the book and it became very apparent that many of these recipes/dishes we had had at home. We look forward to trying some this year ahead.

As for lentil soup (1), I have to say it was the easiest soup I ever made, no wonder it was popular with my busy Mother when I was young!!!

Possibly one of the tastiest venison dishes I have done. Normally we do not eat the fillet, we find a venison rump steak has more flavour but this one beats rump hands down. 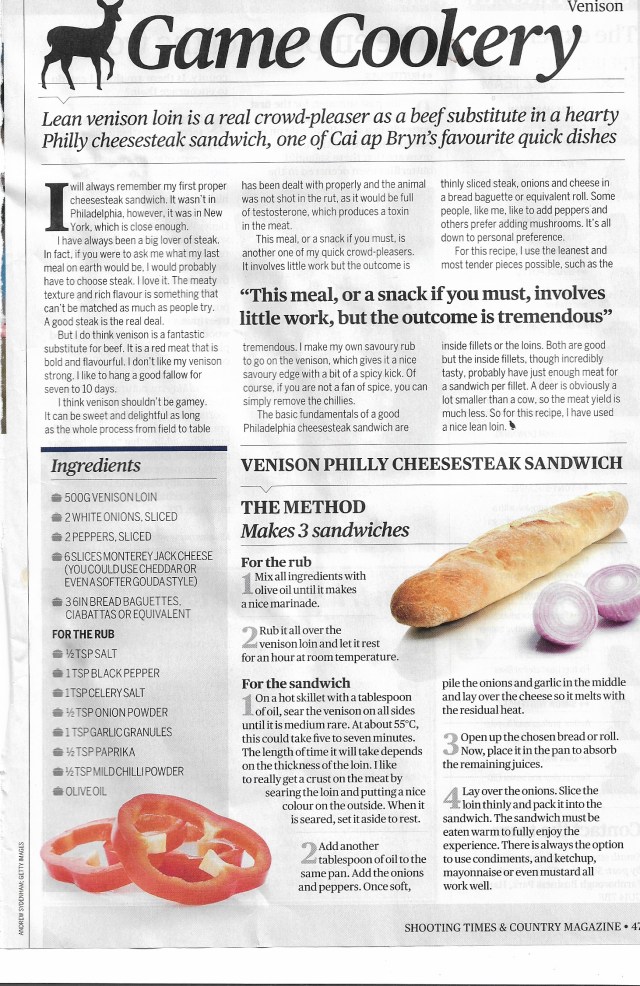 I used Nan Breads that we had cooked on Saturday night for the bread but Ciabatta would be my choice (Fresh). Also we used cheddar, any cheese would do, also Red Peppers from a jar that we got at Lidl, just one.

Here is another venison reipe that we use regularly for our Supper Clubs and take away ‘Meals on Wheels’.

We use Venison as the recipe was originally for. But have used a leg of Mutton, it worked very well. However we prefer using Venison and it is delicious. The only difference is that we would usually take a lot longer to cook the joint possibly 3/4hours and we cover/seal it with tin foil.