Some of our Library

Here are a selection of books that I have read or am reading. They may be of interest. I have quite an eclectic taste, have lots of reference books but favourite fiction Author: John le Carre. Favourite book, I am working on that one but there are so many. Favourite Photobook, Jane Bown’s work I guess, so simple. I guess Aldo Leopold’s ‘A Sand County Almanac’ would be very much up there too. Too many to mention but will do. 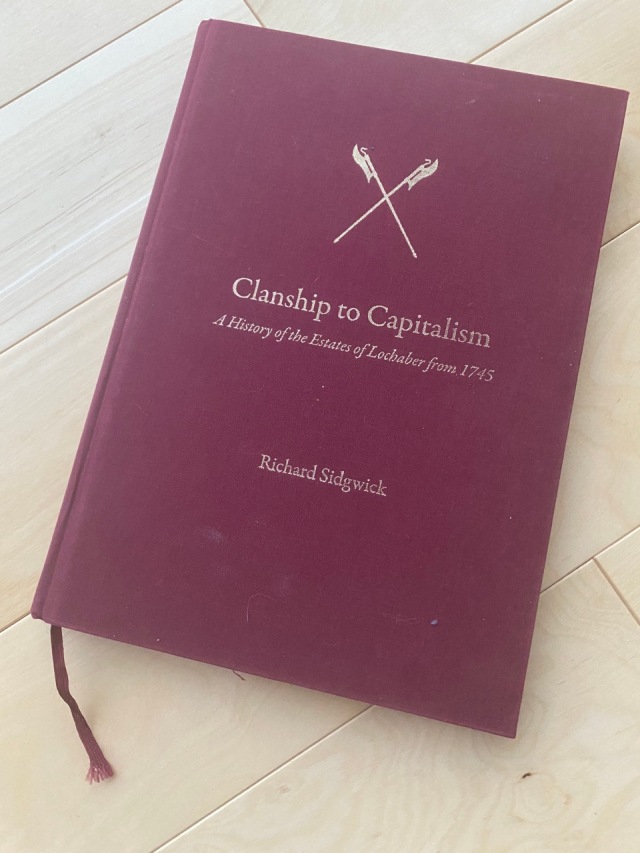 Another well written, well researched and quality book by Richard Sidgwick. It is a little while since I have read this tome. I bought it after reading ‘Sixty Glorious Seasons’. It came to my attention by a Forestry friend that had supplied some of the Estate records that the author has used to good effect in his writing. I was interested to know how as a country, Scotland/the Highlands went from ‘The Clans to the Sporting Estate’ as we know it to-day and to where it was heading in the future. Richard Sidgewick has answered all of these questions for me. Although the book is based on or around the Lochaber area it gives a real insight into how the Sporting Estate developed and has been changing even from its inception. For those with an interest in the historical aspect to the developing Lochaber Sporting Estates this is an important book. A good reference with much of interest in it. The many quality plates, drawings, photographs and maps make for a most interesting read.

If I was to pick out what stood out it would be the amount of work in the form of investment into these Sporting Estates, the  building massive houses, Lodges, even Castles at a time when the description of life in the Highlands for the inhabitants was subsistence at best. It seems though that there was much work available and the prize, a full time position on one of the many Estates, fascinating.

In my opinion I would rate this book as a good investment and reference for many years to come on the shaping of the lands of Lochaber.

The Memoirs of Finlay MacKintosh A Badenoch Stalker

I am just about finished this book, so will leave my thoughts until I do, but suffice to say, a most interesting read. Available from Richard Sidgwick, please email me for info on ordering, £25 plus postage.

There are not many books written about stalking and the Sporting Estate by those that worked on them, day in day out. Finlay MacKintosh’s account of a life spent on the hills of Badenoch is an important work. More so to-day when there seems to be a push to restrict and limit the ‘Sporting Estate’ in its current form as we who work on them know it.

This is a first hand memoir, of a Stalker’s life and times in the Badenoch area working on various Estates. To read it is to sit with Finlay with a dram by his fire as he recites the stories of his life.

Although Finlay had intention of publishing “Sixty Glorious Seasons,” the project stalled, though fortunately the manuscript he wrote, feared lost had been typed out as a keepsake for Lady Feilden, grand daughter of Sir John Ramsden owner of Ardverikie at Finlay’s time. The idea of publication re-kindled and now published by Richard Sidgwick : “Sixty Glorious Seasons’. The Memoirs of Finlay MacKintosh a Badenoch Stalker 1883-1966 is available for all to read.

For anyone with an interest in Stalking and the Sporting Estate from the first page I would suggest that they will be hooked. It is a rare privilege to accompany Finlay on his life journey. Knowing the area would help but his descriptive writing paints a picture that is easy to imagine.

There are a generous amount of pictures, illustrations and maps throughout the book. Many will have driven through the area and the many maps are very helpful in giving the reader an idea of where the locations are that are referred to.

It was a tough life for sure for Finlay’s peers in their farming/crofting circle they had food when others did without, the pace of life was slow and the long winters he describes were hard. From an early age Finlay set his heart on the hill and once establishes as a stalker he progressed to be a well respected, knowledgeable and informed companion to those that had the pleasure to ‘go to the hill’ or simply work with him.

His observations, weather reports and knowledge of wildlife especially deer when the Sporting Estate was at its height of popularity make for interesting reading at a time where to-days Sporting Estate is snapped up by a different type of would be owner. I wonder what Finlay would make of to-day’s re-wilders. Especially with his connection with two Estates at the forefront of this phenomenon .

As the book progressed I kept thinking that those who wish to change the way of the Sporting Estate would do well to read this book from cover to cover and hopefully understand, the world and life of the Highland Estate. Much has changed in a modern world but the traditions are still there possibly more important that the knowledge of those that work on them is there to be heard but seldom appreciated or listened to.

Although the book was recommended to me as a ‘Stalking Book’ I greatly enjoyed all the fascinating aspects of Finlay’s life. His trip to India, his work with ‘The Red Deer Commission’, Mountain Rescue, The Great War and the aftermath of the Second World War. All contributing to a thoroughly engrossing read.

My Yester Years in Glen Affaric by Duncan Maclennan

My Yester Tears in Glen Affaric

A lovely read on a bygone life and on a Glen that has changed so much. I love the stories of the various places that had folklore attached to them, on giants and faeries. His description of the Shooting Estate of old, the visitors, because that is what Estate life was and in many cases is about. How the owners visit, have their time and then the Estate goes back to ‘normal’ when they leave, for the bigger part of the year. Of course the stalking and fishing were highlights as were meeting all the strange mix of visitors but Duncan paints a more peaceful if not hard life in the Glen.

I will not  quote his last chapter but will sum it up that for a man who lived there all his life his observations were seldom requested by the Conservationists who have now arrived (or at last in Duncan’s day before he retired) with their theories on everything wild and what to do about it. Many including those in the Glen would do well to read the last chapter.

Was available from Cannich Stores but I think they may have run out.

Morissons Beauly May have some left.

This book was self published so no ISBN no’ 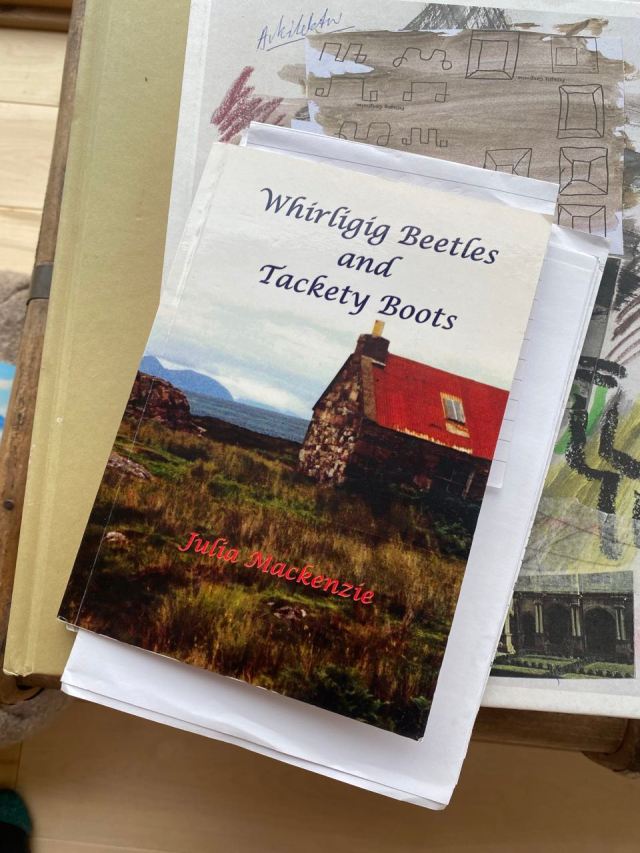 The Latest on ‘Whirlygig Beetles and Tackety Books is that Julia MacKenzie’s daughter is trying to publish another batch. Unfortunately the originally manuscript used for printing has disappeared with the closure of the original printers, always a danger.

Hopefully we will here soon that it is indeed back in print as it is a wonderful record of Julia’s life on Eilean Tighe, Rona tales, their move to Kyle Rona and thereafter.

This type of book written as Julia would tell the story which is wonderful. I think this type of publication is my favourite. It is first hand, from memory and the facts are there. Not the fiction that is sometimes portrayed in books used for reference. 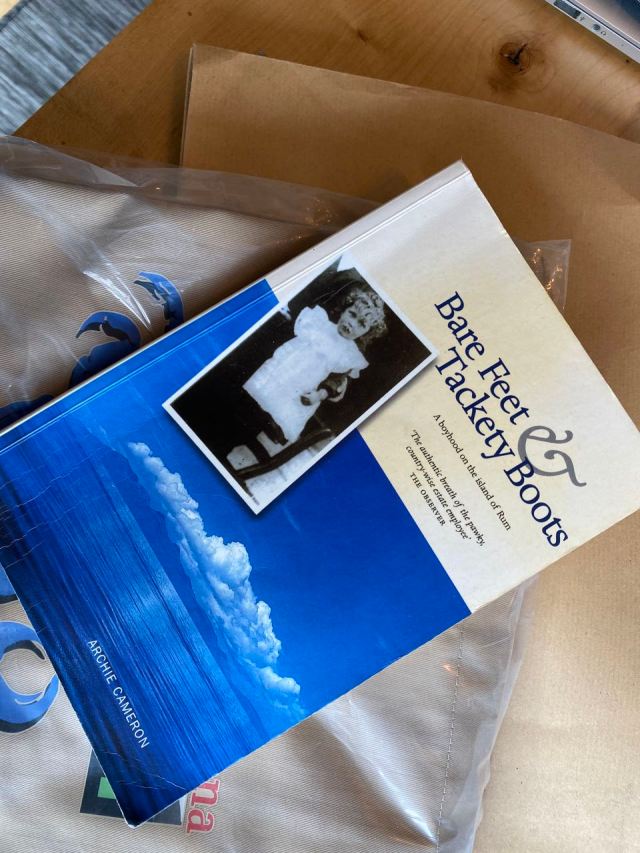 Here is another that was sent to me by mistake. I had said I was looking for Julia’s book above and my source thought it was this one. Readily available from the internet. It tells the story of Archie Cameron’s life. Mostly on Rum (or Rhum, explanation on the Island’s name in the book).

It is a good read too, I read it again this winter. I especially liked the last chapter page 124:

Contrary to popular belief life on the Estate had its advantages and although Landed Estates get a bad press for the sheep and Deer, there is much more to it than that. Reading these first hand accounts gives possibly another view to life at that time.

I am always on the look out for more of the same.