I’ve been living on the island since April 2002, alone for the first 5 years, my partner L joined me in 2007. We manage the Island for a Danish family who bought the Island in the early 90’s.
Their hopes for the Island are to make it self sufficient supporting its inhabitants, welcoming visitors, developing the infrastructure (sensitively) and that is where we come in.
We look after the stock (sheep and deer), 3 holiday cottages, machinery, the boat and of course the visitors.
It can be challenging but it is a beautiful place to live and work, we love the Island and strangely enough we love it even more in the depths of winter when all is quiet apart from the gales and rain.
We do a bit of fishing, stock work, stalking deer and loads of other stuff. We have good support from lots of people whom we have met over the years and have become involved in the Island. Too many to mention here but keep an eye on the blog, they’ll be there for sure in the future.

In a decade working on the Island we have carried out many projects. I arrived in the middle of a woodland grant scheme (WGS). The Island was pretty bare in the early 90’s as primarily it had been used to keep 500 or so sheep. The sheep were cleared and as far as everyone was concerned there were no herbivores. In fact there was a resident stag and a hind at least (more later), rabbits at the North end and a few stray sheep left over from the last gathering.

At the time of taking over the Island from the Department of Agriculture it ‘went on fire’. A heather fire raged for a while on Rona from end to end, there was nothing to damage but the wildlife would not have liked it. However that gave a fresh start for the vegetation and the regeneration plan was started for the forest. Most people approaching Rona look at the lump of rock at the end of Raasay but in high summer the Island is lush with a new growth of trees, mainly birch. They are often surprise, especially when they see the 120 year old forest in the South West corner of Big Harbour.

Cattle were introduced to ‘churn up’ the ground and when they had completed their task they were sold on. The forest started to get away from the heather and after many years deer were introduced as part of the natural bio-diversity of the land. of course there is the added benefit of a sustainable food source, a source of income and the pleasure  for the residents and the visitors to watch them, to date they have been very successful, the herd is in good order. 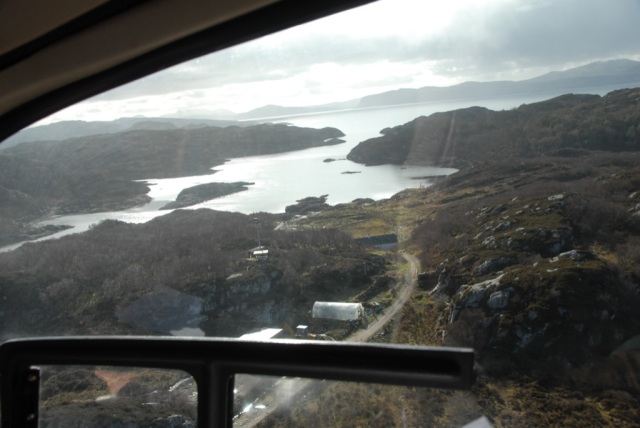 A few years ago a small pack of sheep were bought and are kept to graze around the house they are usually kept in an outrun of 40 hectres.

Around Rona we have abundant wildlife with many birds, lots of sea birds according to the seasons and of course we have a fantastic platform for viewing the big sea mammals. In the past we have seen, Minke, Sperm, Killer and Hump back whales, at times we can have 20 Basking sharks in the vicinity. There are many seals which points to a healthy fishery and the pods of travelling Dolphin, Common, Bottlenose and in the past Risso have been seen. Common around the South of Rona are families of porpoise who stay around all year. Even Sunfish have been spotted from the Qinetic helicopter.

Different times of year are recommended for the many species, we do not have them all year round.

The Sea Eagles are now common, as are other birds of prey. The forest supports many small birds especially ‘Long Tailed Tits’, my favourite, such a delicate bird and nest, usually rearing many young. They are often seen around the tracks and walks.

We have many yacht, boat and kayak visitors, they too are looking for peace and quiet, their season is short with the occasional off season boat turning up unexpectedly.

We ask that all visitors to the Island of Rona respect the wildlife and that includes the two permanent residents.

We look forward to meeting you.