Where Did The Summer Go?

A week ago yesterday we retreated to the cabin for the afternoon for some time off, a read, perhaps a drink and some relaxation. It was not a very good day but still summer! It was good to get the feet up at last.

Monday morning it was back to the crappy jobs, the sheep in particular have taken a liking to sleeping in the porch, next to the beer! But what they do when the waken up is the toilet so that has to stop. I guess until we get the new fence up it would continue.

A quick scrub up and clean then plan B. Get the hurdles from the fank and set up a no go zone.

Solution To The Problem

The weather felt like their was a change on and the forecast was for a visit by the tail end of hurricane Bertha, so it was no surprise to have showers. 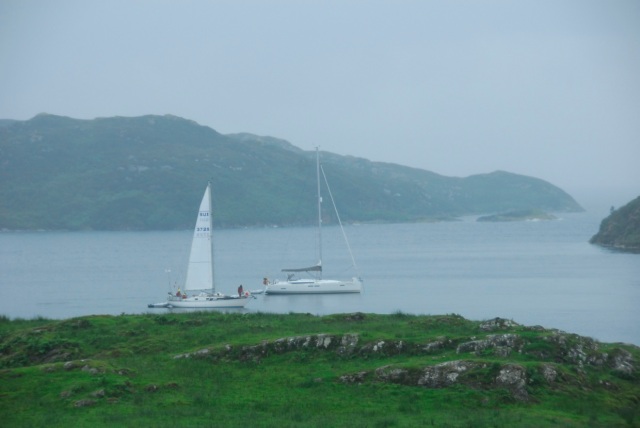 Tuesday was a funny day, hot, warm, cool! Then showers then a foggy type of cloud kept coming in. By evening it was raining when this Swiss boat came in. There was a bit of a North swell rumbling away but nothing too serious. 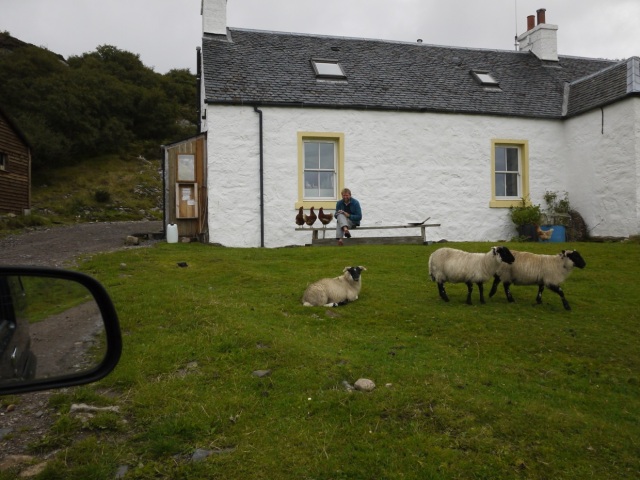 Next morning the Swiss sailors were up at the Lodge for showers. The skipper was intrigued that the hens should help with the iphone. Although we are over 400 yachts visiting this year they have now disappeared and it feels like September in that respect. When, all of a sudden the season falls off a cliff, strange to be happening 1 month early.

Thursday was the best day, I had been stalking with a yachting guest all morning but received a call/email from Applecross saying that the internet was down, we have two systems so still no problem receiving emails. So after sorting out the stag, I headed up to the relay masts, forgot my meter so I checked the fuses, changed one that looked dodgy and fiddled about with everything, finally switching it off and booting it up again, never fails. When I got back to check my emails there was a message saying it was back up and running again. 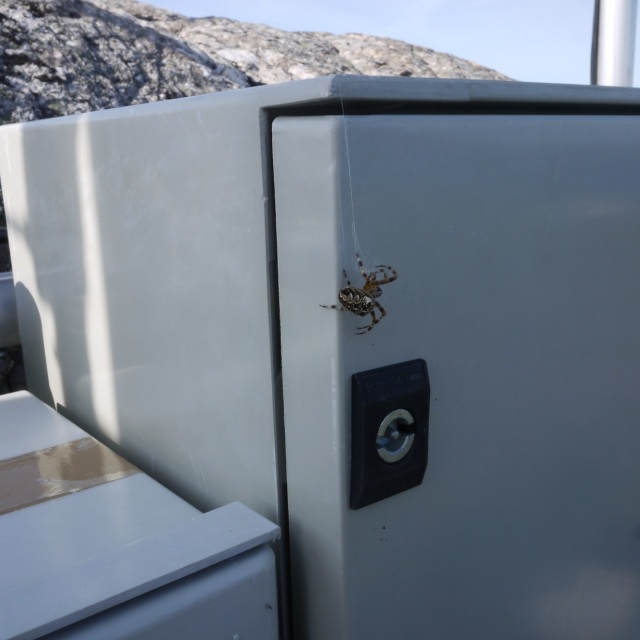 This monster spider was not for giving up his territory and kept coming back to this corner despite opening the box.

After the wonderful day on Thursday it started to turn calm in the evening. With the hurricane still on its way we decided to get the ferry over Friday because the forecast was pretty poor. I had to go over to Escape and let the visitors know what was happening, they were enjoying a glass of wine with the midgies. To good a night to stay inside but midgie heaven outside.

The Belgians Have Arrived

Late in the evening these two boats arrived, chartered with Belgian crew. Lots of kids and chatter on the VHF. Of course I was not impressed with two boats on the mooring but they came off Friday morning and bought lots of venison and paid for the mooring. I warned them about the poor forecast but they would not believe me, so I showed them on the computer what was about to come and they decided (reluctantly) to leave for Portree. I hear them on the radio to-day (Monday) still chattering on the VHF, still in Portree.

Friday afternoon Stuart and his family got out on the boat, we had creels to shift before the North West gale and to try and catch some fish. We got some crab and a couple of Wrasse were in one creel. One was alive the other dead, I think the crabs had had a go at him. So we threw it overboard whereupon the Sea Eagle appeared and flew down just beside the boat and picked the fish up. Of course the telephoto lens was at home, better luck with a photo next time. Still, it was a great sight to see the bird so close and they seem to be hanging about in this area so we will try them again.

We put down a line and for the next half hour or so we filled a box with some very good makerel. Then they started to tail off and the shoal was gone. We messed about for a while but early evening it freshened and we headed in.

Once we had sorted the catch, sorted out the Friday night guests and had a very late dinner I cooked the crabs and was intrigued to find that the biggest crab had a yard or so of fishing line tangled on its claws.