Everybody has lists, especially from around about your 40th birthday, is it because life then becomes very busy or the brain cells are beginning to deteriorate. I don’t know but I seem to have had lists for years. The Rona list is no exception. This is a list I started in September 2002 and it just seems to get longer, it is titled ‘Jobs to Do’. I just added, finish the fire, finish the cottage, cut winter firewood,Xmas Shopping, cull some hinds, etc, etc. Oh and do the blog. First of all I must go and put some Micafill down the chimney, a three day event on the list because yesterday I poured some grout down to seal the join from the fire to the liner. But it will be a weeks job because I had to break off the chimney pot and it will of course take a week to replace it. 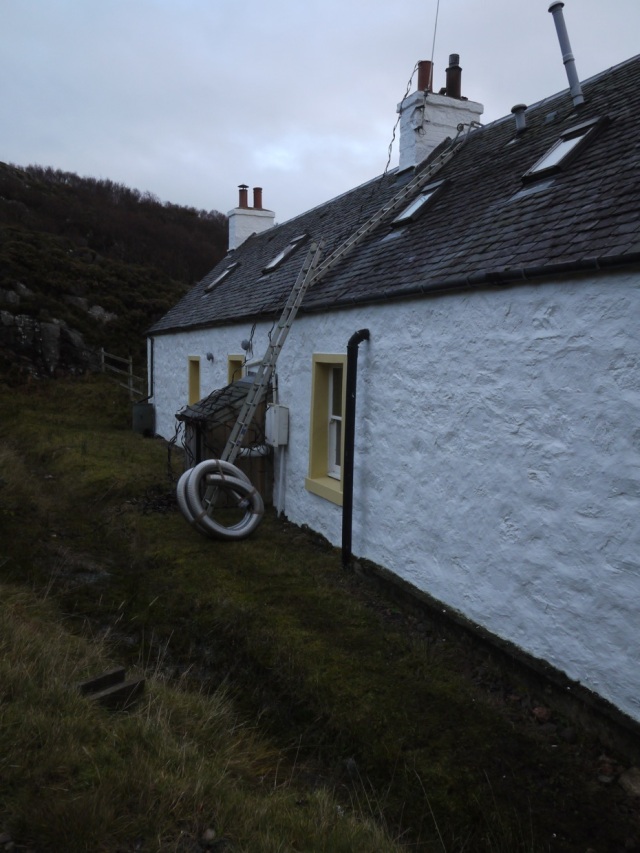 It has been a busy week (and very dull), tidying up after Arne’s visit. First thing was the fire, then the cottages and in the middle of it Hugh arrived with the sheep so there was a bit of prep’ for that. 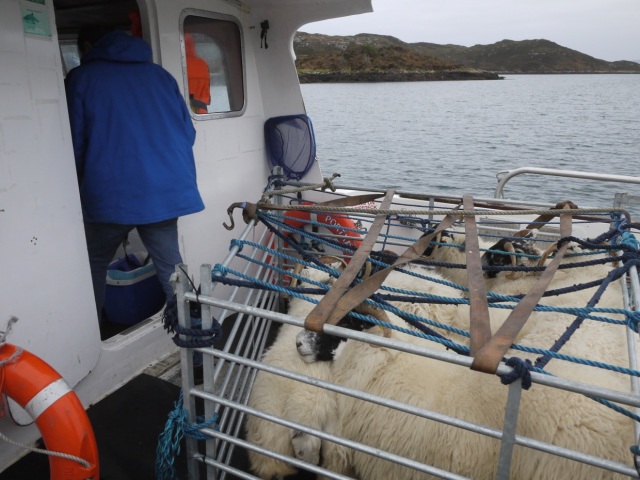 I asked Hugh (plant hire/Raasay) to look out for some good ewes to add to the Rona pack. At the Dingwall mart a few weeks ago he did just that and bought us 6. They holidayed at his brother’s place outside Inverness and when we got a weather window MV Stardust (our old ferry) took them over. At least this ferry made it, Hugh informs me that the new Raasay ferry has been plagued by breakdowns and yesterday it had an engine fail and ‘skelped ‘ the pier!!!! 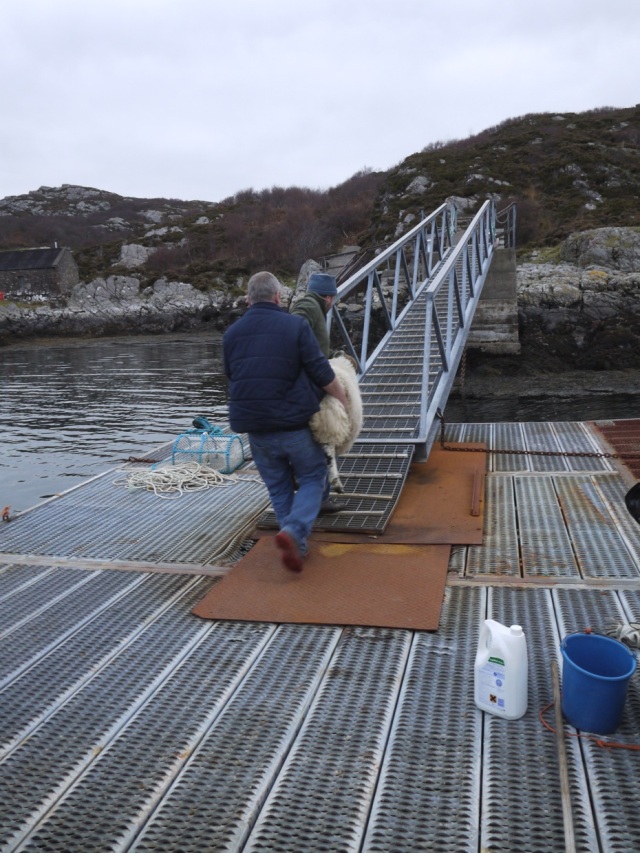 They were pretty wild, I have to say. Originally from Canna, via Dingwall and they holidayed at Culloden for a few weeks. On arrival on Rona they certainly put up a fight. 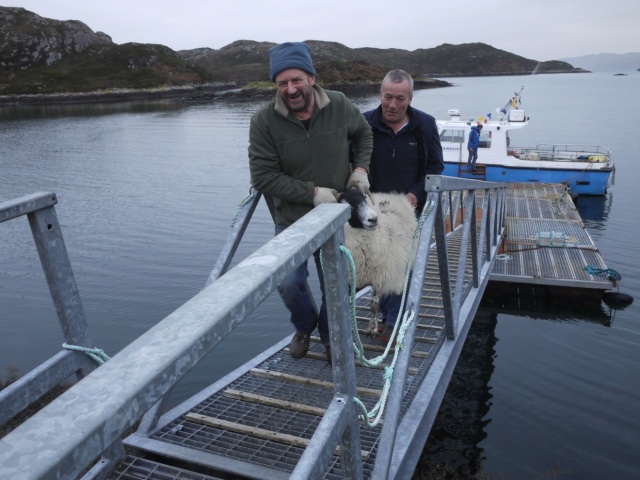 The new sheep patrolled the fences on arriving in the park so first thing on Friday was hurried fence repairs. 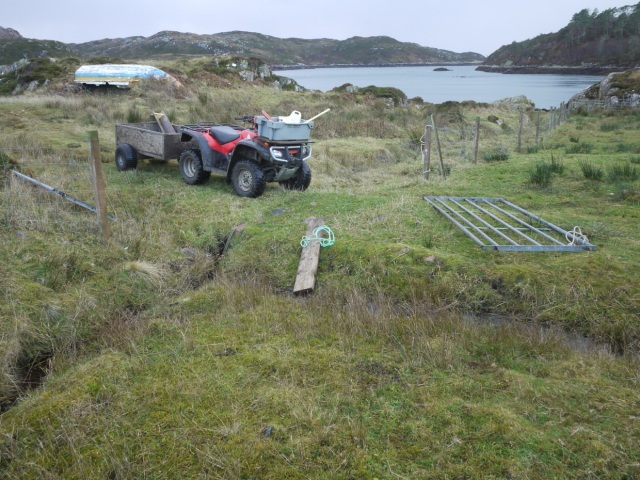 After the holiday we were missing the food so we managed a Spanish dish through the week, L had found some baby leeks on offer in Tesco’s, we thought La  Calcotada with a Romesco sauce and grilled mushrooms. Just like Barcelona a few weeks ago. A disposable barbecue which had been left in the cottages was pressed into service and the £3.99 Spanish cookery book (bought from an Edinburgh charity shop) was consulted and a very tasty conclusion with a glass of Spanish wine of course was enjoyed. 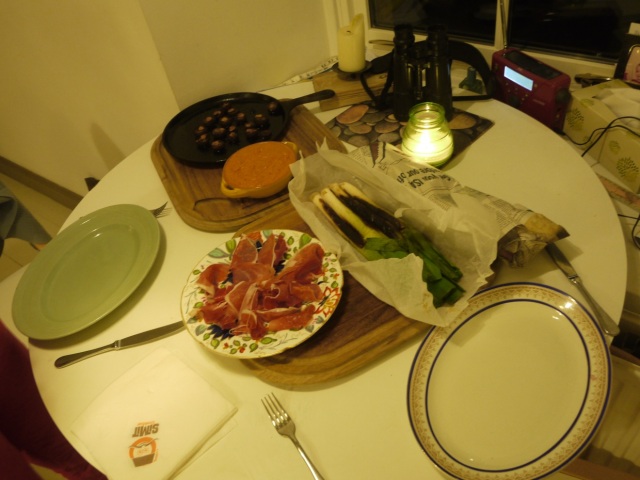 Saturday our guests who had been on Rona for a fortnights break left and we had Rona to ourselves, but first thing after MV Spindrift left was to pack and freeze two stone of fish from Breuchie, 1 smoked 1 plain haddock. We had some to-day, very tasty. 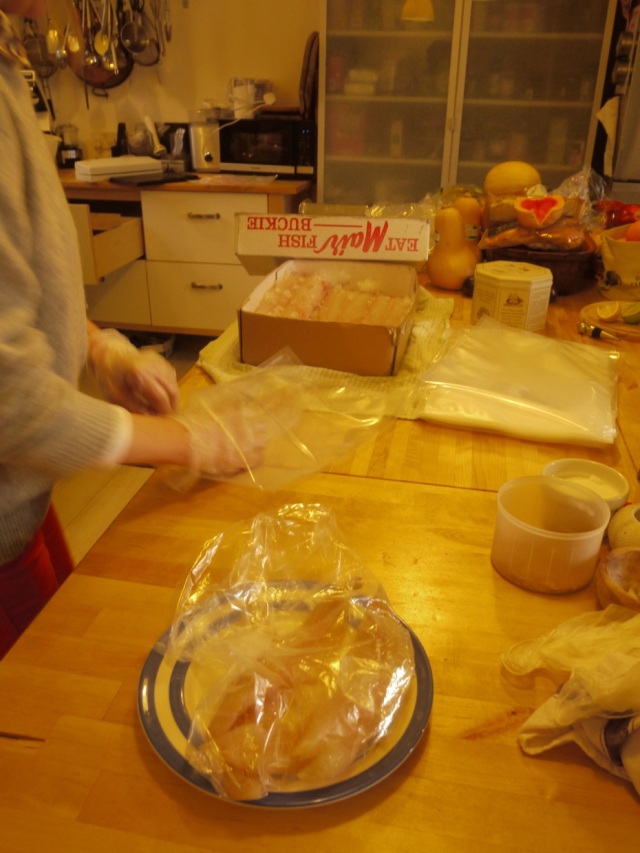 I had been feeling a bit tired almost rough all week and on Saturday I felt as though I had a cold and by night it showed all the signs, so this morning it was a job to get out of bed but with a fire to work on and various other jobs I had no option. 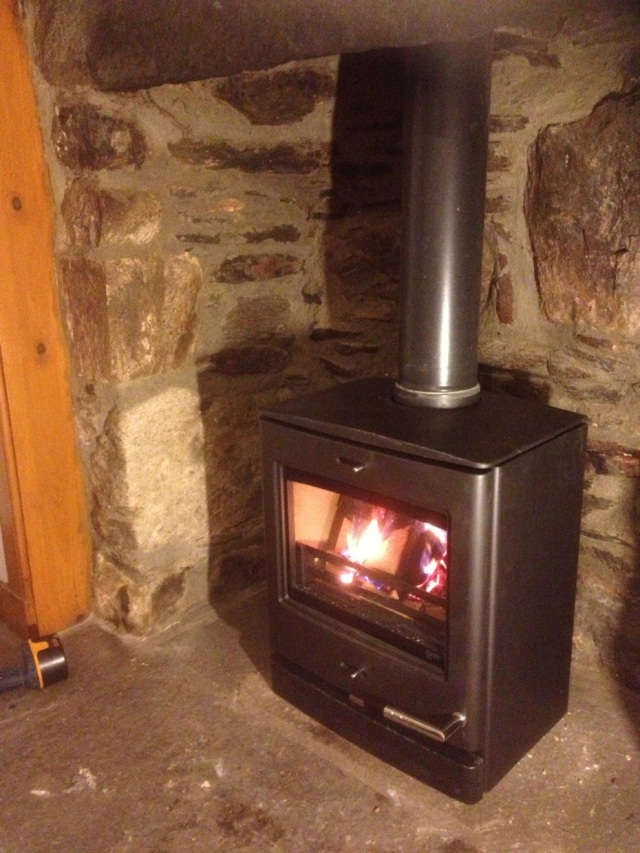 It Was A Bit Smoky

I got the last of the Micafill into the chimney space and sealed it up, Julie came onto the lawn and watched me when I was on the roof for a while.

Then it was up to the shed to sort the JCB puncture which (fingers crossed) stayed up. 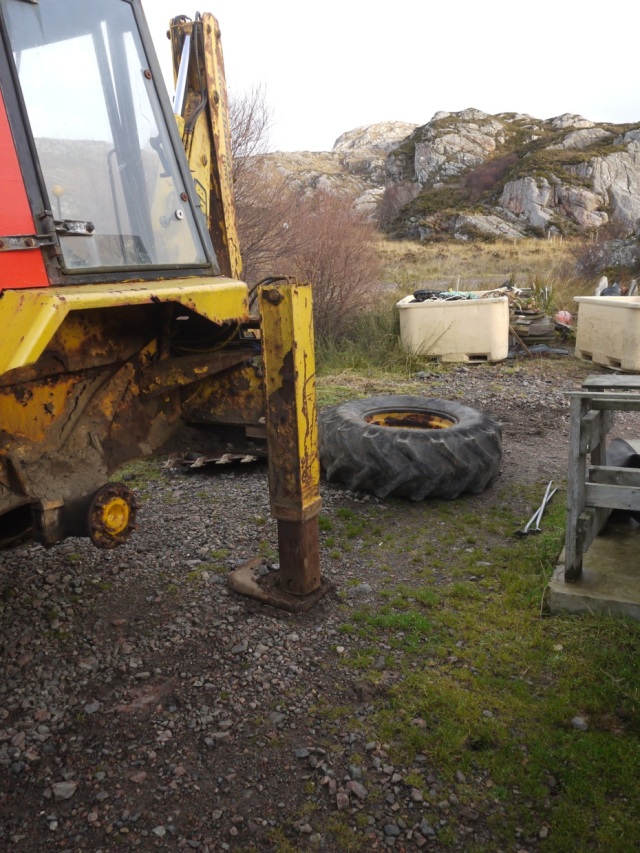 So here we are full of the cold, that will teach me to go on holiday.