Back To Earth, with a bump.

We got back last night after dark, the forecast was poor for Tuesday and so it turned out. 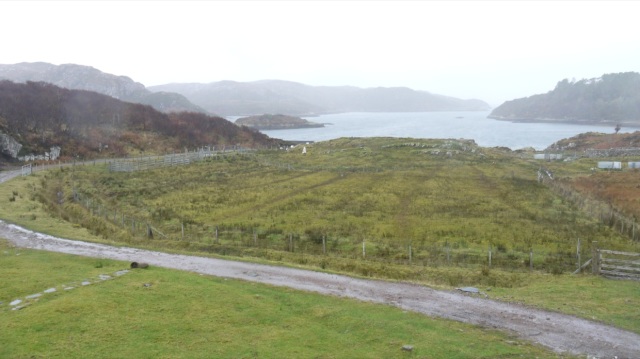 Lorraine went down to the hens in the wind and rain first thing, although the photo looks light it did not really get bright at all to-day. But with a couple of weeks of washing and catching up to do it was good to get going inside. A wee run over to Dry Harbour later to catch up on progress saw us shut the door of the cottage and promise to get to it next week.

That was how we left Skyescape after Calum and Irene filled the cracks and sanded down the bumps, but it was good to see the progress from a few weeks ago. Seems like yesterday Ian the joiner was here, we were in Barcelona and back, Arne, Erik and Georgie came from Denmark to Rona.

Barcelona of course was super, 23 degrees during the day and blue skies, seems like so long ago. It was November of course but what produce they had, it was fantastic. 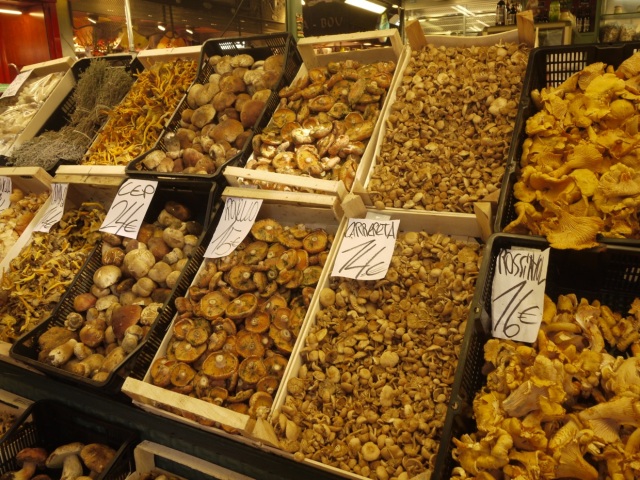 The Salt fish were very unusual for us but not that long ago in the Highlands it was common before fridges.

The evenings were very busy, seems the locals and visitors hit the street at around 6ish.

And the sunsets were competing with Rona.

No visit to a sea port would be complete without a walk round the harbour. No shortage of boats and plenty for sale.

We had a run out into the country courtesy of Magnus, Kenny and Linda (Shieldaig’s son) who works and lives there. We never made the mountains but stopped at a restaurant near Montserrat, where we had Calcotes. 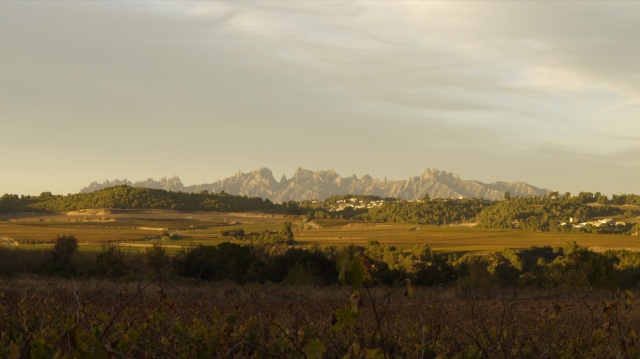 Lorraine spied some leeks in Tescos so we were planning the Calcots on Wednesday night. Although we did the tourist thing the holiday was mostly about the food and it was a great introduction to Catalan cuisine, we loved it, the cakes were a step too far though.

All to soon it was back to Edinburgh and two nights with our friends Jennie and Laurie up at Merchison, they took us out to our favourite restaurant (Nonna’s) just down from Holy Corner, which is always good. This time it was really special. 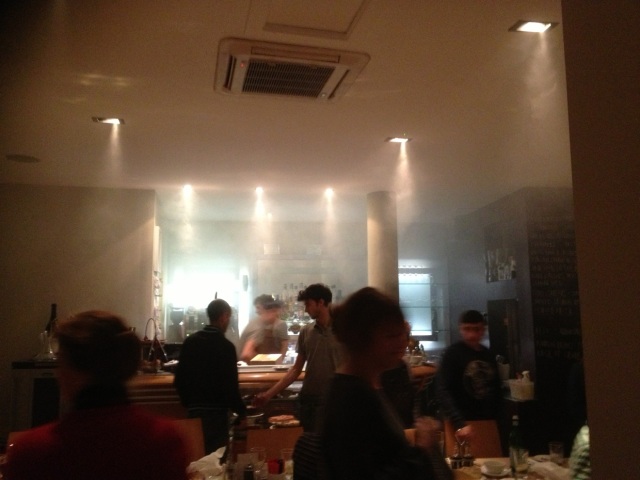 Just about to order up and the smoke appeared, the toaster caught fire and the young waiter panicked, he just closed the door on the smoking toaster. Another (more experienced ) waiter decided to open the door and that was when it burst into flames. Very interesting but in true Italian style 15 minutes later we were sitting down again. Next day we headed up to Skye and loaded up the MV Spindrift.

But the next day sailing wasn’t to be and we were stormbound on a filthy day on Skye. Arne and our Danish workers arrived on the Friday night so we took them for a trip round Skye in the mist. We had a brainwave and suggested Lady Claire MacDonald’s restaurant for lunch, the Danes were intrigued.

We had heard a lot about it but had not found time to visit but after one of the best meals of 2013 it is a must to go back and have another meal sometime soon. Their winter offer is very good value and we would recommend it. After a lunch of that quality (and cost) there was nothing for it but a trip to the chip van in the evening, what a contrast. 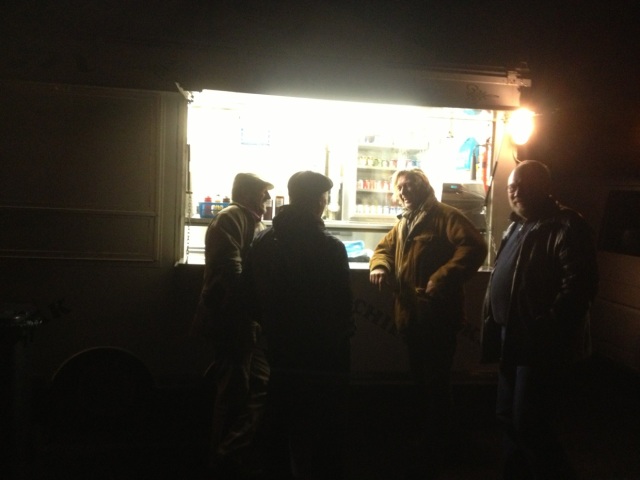 Sunday morning early we headed over to Rona to relieve the crew, stores of course had to be put ashore.

We got down to work fitting a corner sink (nightmare) and the Danish contingent were happy to have a beer early afternoon. 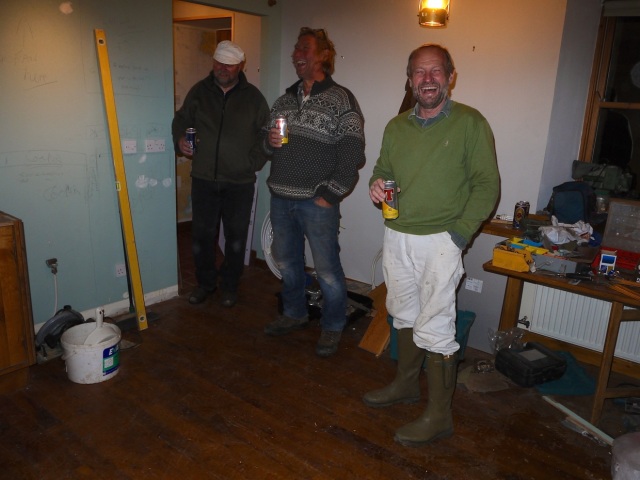 The work was steady with no time off but in the evening we had a lot of fun cooking as usual, ‘What We Have’.

This is the cooking philosophy on Rona, what we can put together with what is in the freezers and on the table. The haggis lasagne was interesting. 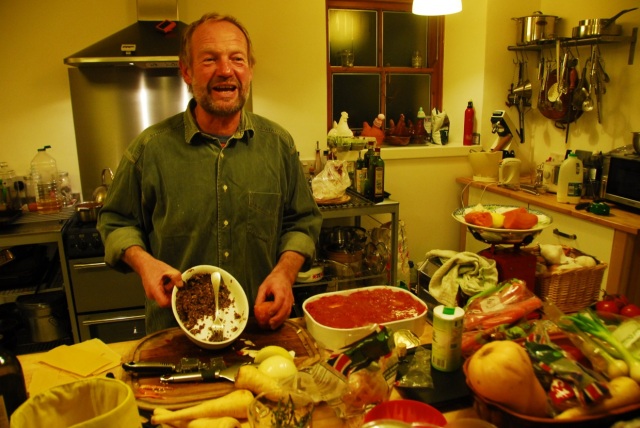 Arne the chef, starting the lasagne

An interesting take, a Scottish lasagne, I’m sure someone will have tried it but it was really good.

It was not all haggis.

Lobster, on a lobster/parsnip puree

Then of course we had to try out the pasta machine, so left over haggis and lobster went into that!!

The last day Erik took off up to the chalet to paint and made quite a few watercolours, one he left with us. He said the light was incredible that week and the late Autumn colours just stunning, very vibrant. 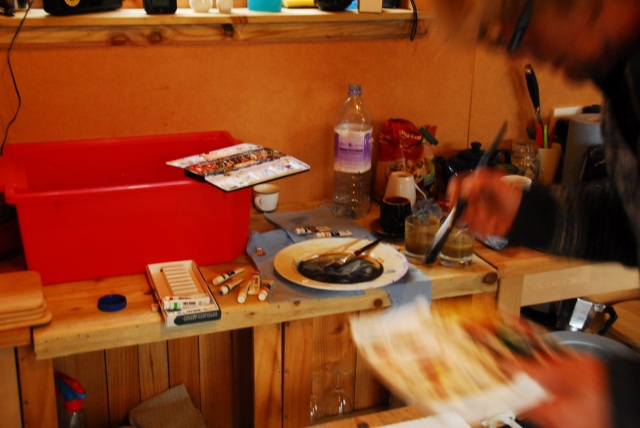 Erik Going For It.

The last night with the Danish workies was another funny night and Erik insisted on trying out my kilt, I was disappointed to see it actually fitted him. 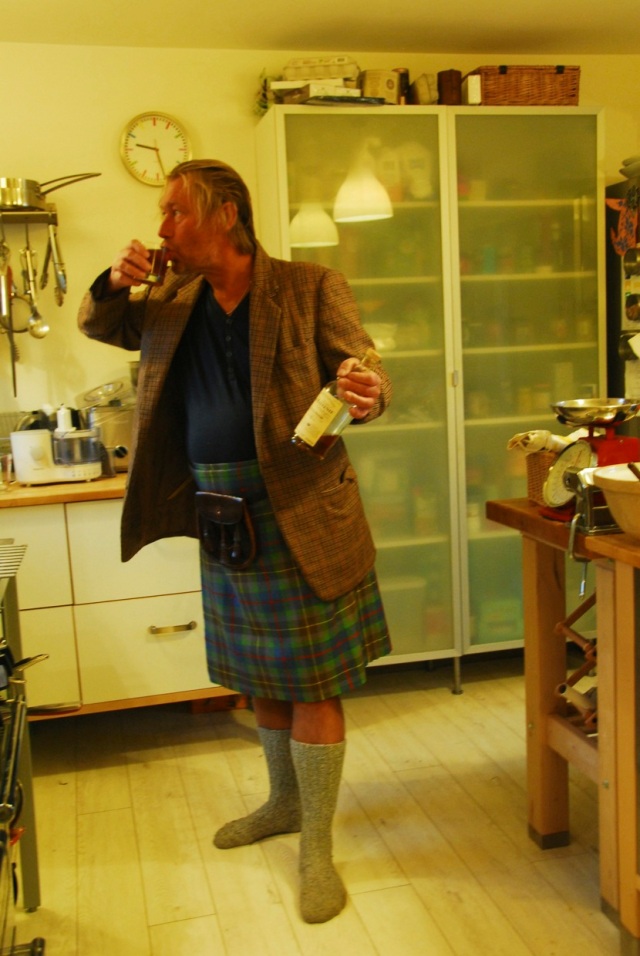 Erik left Friday, we tidied up and all too soon we were off on Saturday to Edinburgh with our visitors and for a final Xmas shopping trip.

No run to Edinburgh would be complete without a stop at Bruar but not as expensive as it could be.

The A9 Toll Booth

We had a good evening staying in Edinburgh at the Howard Hotel, another great find. The rugby was on and we could not get a restaurant and more in hope than anticipation we phoned Tom Kitchen’s restaurant down at Leith. As it happened they had a cancellation and squeezed us it. Probably the next best meal of the year.

Next day we headed home and here we are back on Rona, grey days but good to have a more settled period. Lots of things to do and we are looking forward to getting up to date and finished by Xmas.

1 Response to Back To Earth, with a bump.