I got a call this morning early, ‘How’s The Weather’?   Bonkers! That was my reply, since 5 am the roof of Rona Lodge was getting its annual appraisal by the wind. Up until about 10.30am it was just full force with the radio telling us that it was 50 to 60 mph, I can believe it. 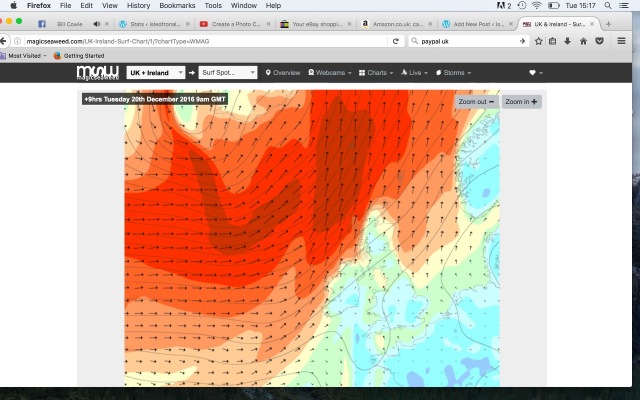 The depressing thing is that this is what we have for pre Christmas week and with it continuing until after Christmas day, in fact the night of the 25th is pretty severe but we will wait and see. Working back from to-day it has been the usual busy Island, or at least we are busy, everything else just gets along nicely. After the wind subsided I decided to go and do a wee bit at the new roofed shed down in the field. 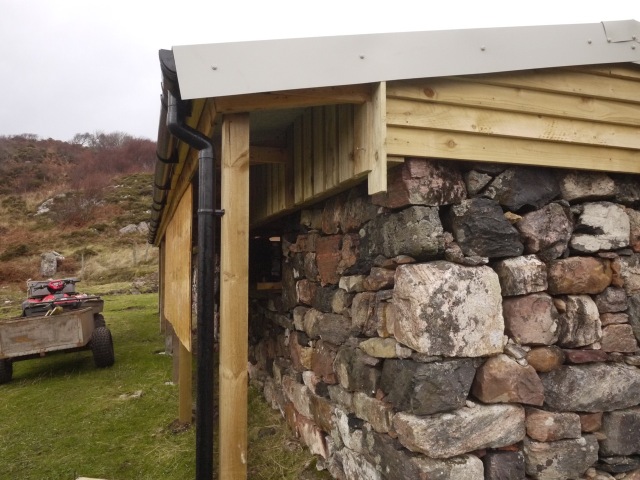 Cladding In The Gale

Quite a sheltered job until you had to go out past the sheets of ply, then the wind took to throwing me against the wall, what fun trying to nail boards on. Around 12.30 I gave up with the first spit of rain, now two hours later it is very heavy rain. Ah well it had been a good spell leading up to to-day. 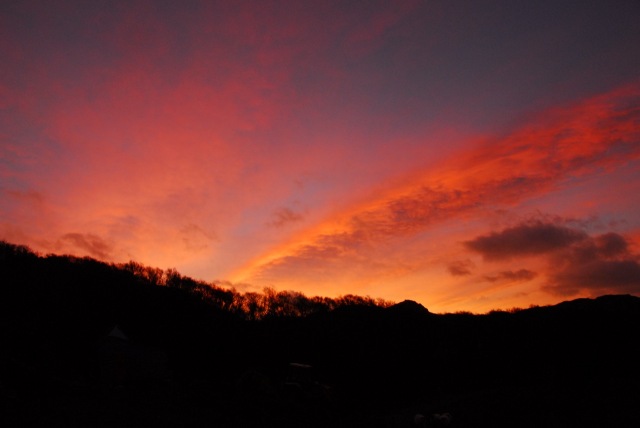 In fact this morning I was sitting having my breakfast and the sun started breaking very red, grabbing the camera I shot outside and the first thing I saw was an otter in the garden. By the time Lorraine got to the window to look at it, it was gone. 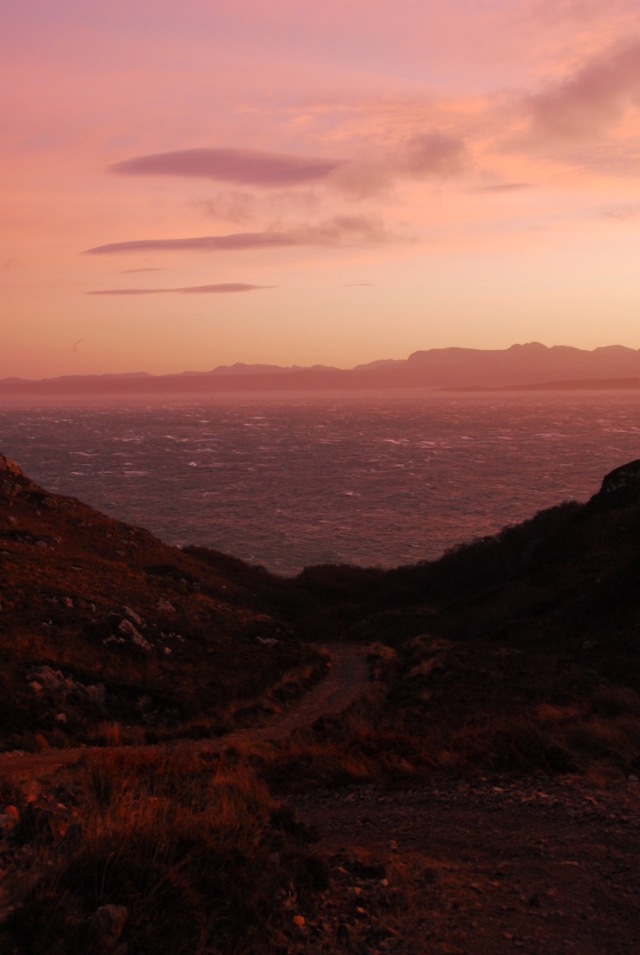 Top of The Hill

I took a toodle up to the top of the hill after that but the sunrise was almost over, the sea though was pretty high. The wind right out of the SE at that time and it was pretty cold. 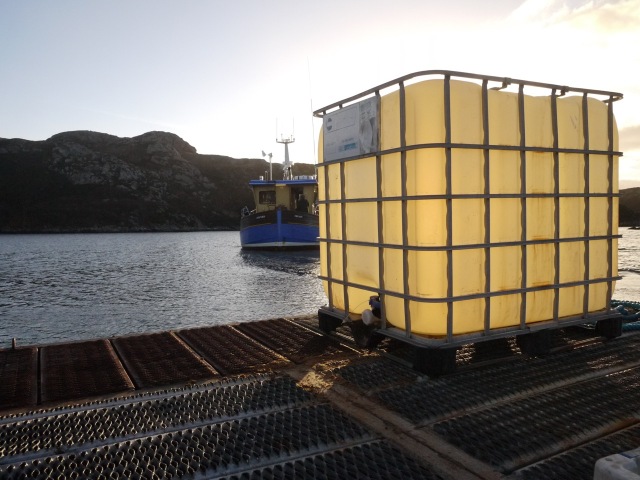 Yesterday was a good day, no wind and calm enough for MV Aspire to make a fuel drop. It was our last mail until after Christmas going by the forecast.

It was good to get the Tesco’s order delivered on Sunday night and dropped off on Monday morning so that was the food sorted but no turkey, they were sold out!!!!! Plenty mail and there were a few presents that did not arrive but that will be a nice surprise after Christmas.

On Sunday night I woke up at 4 in the morning, thinking that I had given Kevin the IBC (Industrial Bulk Container, somebody asked!!!!!) with the rubber plug in it. This IBC had come from Mallaig last landing craft delivery, it sprung a leak on the landing craft and Jamie the skipper had plugged it quick. I would not use it again for fuel . In the rush on Friday to catch the boat I just grabbed the first IBC and was sure I’d given Kevin the wrong one. Thankfully no panic it was still up top. 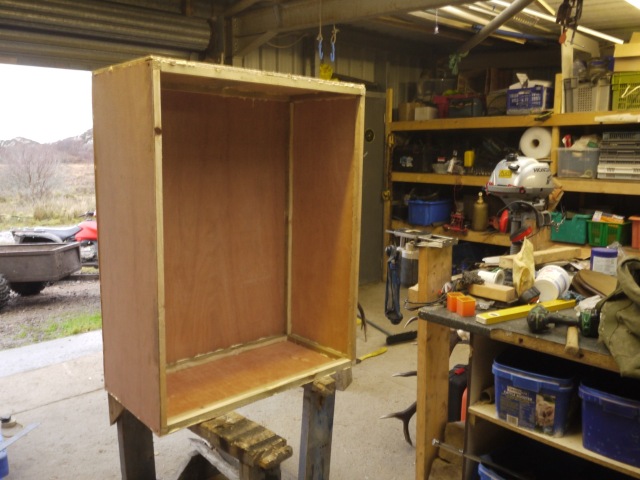 Last week we had Dave over from Ireland, he was helping out with hind stalking. Luckily we had a good week of weather apart from one morning and that was the day we made the box for sending the antler trophies shot in October to Europe, problem is we can’t get anyone to take them. We need to try plan B, posting. Seems that a lot of the distribution folk will not transport ‘animal products’. We’ll find a solution for sure.

Hinds On The Hill on The Way To Dry Harbour.

It was a pretty full on week with Dave last week apart from the morning on the box. The hinds are getting to levels on our 2000 acre Island that we need to cull a number, which is always ten times more difficult to do compared with the stags, this group are quite safe though, they hang about the roadside up at Meal and are in tip top condition. It is difficult to find poor condition hinds here which tells you that there is plenty forage and shelter on Rona but at the risk of the Island getting cropped bare the Deer Management Plan has to happen.

During Dave’s week the moon was full and as far as I could see was not too different from the ‘Super Moon’ we had the month before, I went up the hill to try to get a photo of it but got held up. When I arrived I had forgotten my filters and there was a band of clouds spoiling the view. It was so cold I did not mess about, so I took a few shots then retreated, quickly.

With the full moon and clear skies we had quite a few cold and frosty mornings, Julie is never far away when the sheep get fed. 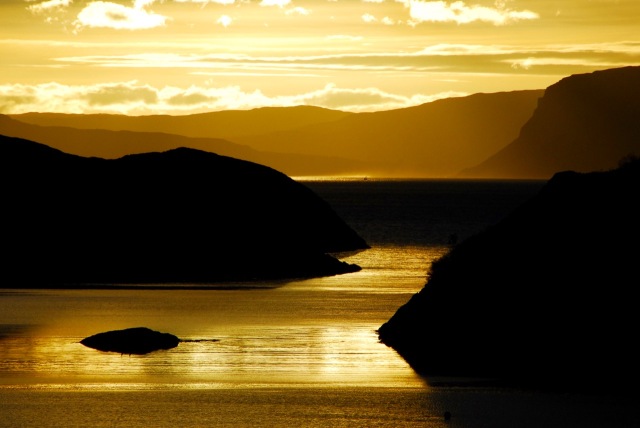 In between stalking times the light was pretty good and it was good to be home at the time and able to grab the camera, in fact we did have quite a few nice sunsets. 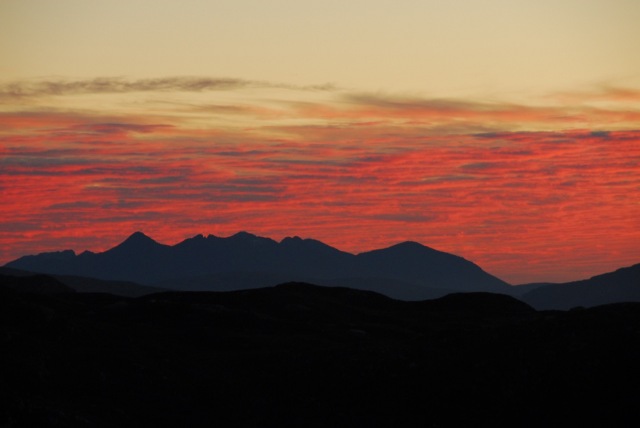 We had guests in the cottage the week before Dave came which was good to have at this time of year, they had booked a week a couple of years ago, cancelled, but took up their booking again this year, Michael and Amanda came here 6 years ago from Australia and loved it, here they were back again. Their week turned out pretty good weather wise which is always a bonus. 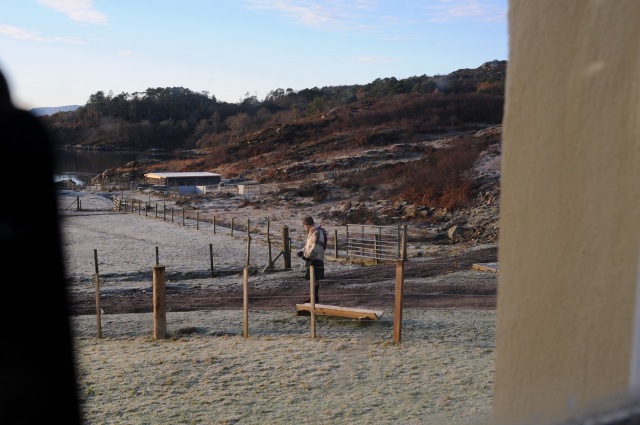 We did not see much of our guests only when Michael came over to use the internet (with his kilt on, for Scotland!!).

Days like this in the winter have been a premium this past few years but this winter has been exceptional, taking it bad to-day it is awful outside just now. 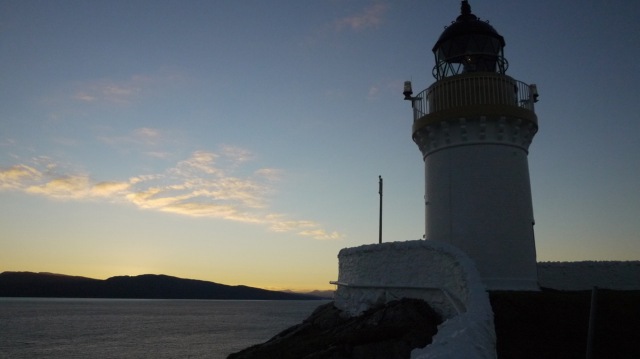 Before Dave arrived I thought I would do a recce of the North end and deliver a box of venison to one of the girls who work up at the Base. It was a stunning walk, I think it was Sunday morning, very cold and crisp. Nice to be at the lighthouse before the sun got up. Plenty deer about and nice to see the guys up at the Qinetic Base.

Back to Big Harbour by lunchtime and the frost had still not melted. So nothing for it but to get up on the frosty roof and fit the new vent pipe and flashing delivered on that weeks ferry.  The pipe had been too short before but now it is a longer one with extraction fan, it works very well.

I finished that pretty quick so got the outboards closed down for the winter, batteries off, rust proofing into the engine a wee run up and then that was them till March I guess.

Trying To Get Ahead

The only other job I can remember from two weeks ago was firewood, the boxes are quick to run out so it was a necessity to get out into the forest to stock up. I was over in the forest with Dave and spotted a few big hardwood trees down. I have a plan which involves the Torfor winch and Kevin’s MV Aspire, that could be the Christmas project, we will see.

I've been living on the island since April 2002, alone for the first 5 years, my partner L joined me in 2007. We manage the Island for a Danish family who bought the Island in the early 90's. Their hopes for the Island are to make it self sufficient supporting its inhabitants and that is where we come in. We look after the stock, 3 holiday cottages, machinery, boat and of course the visitors. It is pretty challenging but it is a beautiful place to live and work, we love it and strangely enough we love it even more in the depths of winter when all is quiet apart from the gales and rain. We do a bit of fishing, stock work, stalking deer and loads of other stuff. We have good support from lots of people whom we have met over the years and have become involved in the Island. Too many to mention here but keep an eye on the blog, they'll be there for sure in the future.
View all posts by Bill Cowie →
This entry was posted in Books, Daily Doings, The Views and of course the weather, Wildlife. Bookmark the permalink.