A Hint of Spring

We had a hint of spring last weekend, nice warmer days and dry at last, then the week got going the wind is now in the North and Winter has returned.

Priority job was to have a look over the sheep on my return from Inverness so it was good to have a nice weekend in the dry to get that done.

It seems a long time ago that I put a post up, lots been going on since then. We had the last load of kerosene from Portree, we have been using a lot lately but it is good to have it at a good price.

Jim from Dion came over on the boat and serviced the fire extinguishers, an annual job that has to be done.

I had bought a 60hp back up motor on ebay, fingers crossed that it runs well!!!! I was going to try it this week but I did not fancy getting hypothermia standing outside messing about with it. 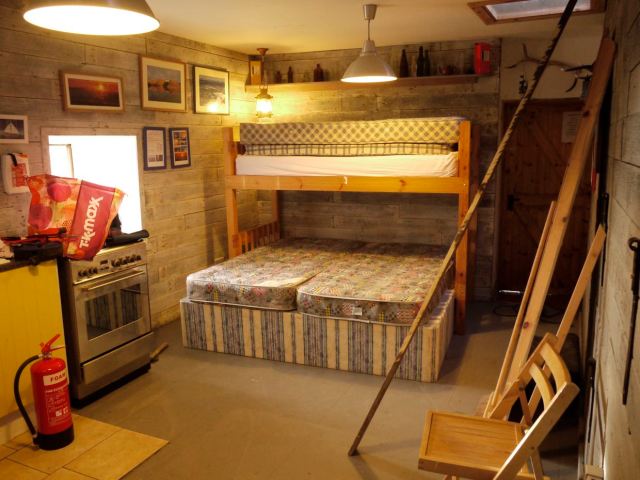 With the dry days we took advantage and shifted some furniture down to the bunkhouse. We are giving it a makeover this year as it will be used when we have folk over to give us a hand with all the jobs, relief, building and the stalking. 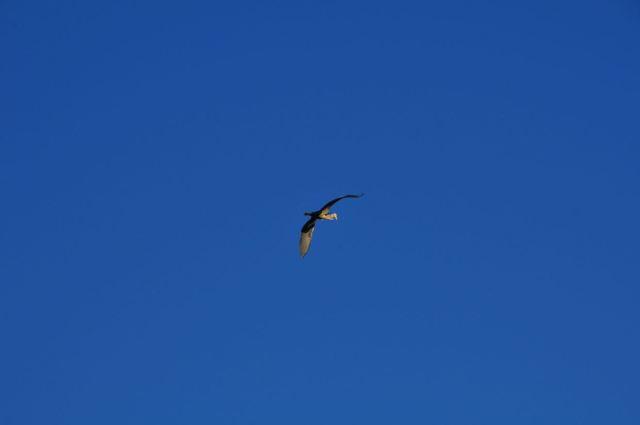 Sunday was such a nice day I headed over to the forest for a look around. The Sea Eagle had been hanging around and I was keen to see if there was any sign of them. The herons had taken off as I approached the woods but I thought that it was not me, sure enough I looked back and here were 5 Sea Eagles flying over, three of them started to play around and then they drifted away after 20 minutes to Raasay. 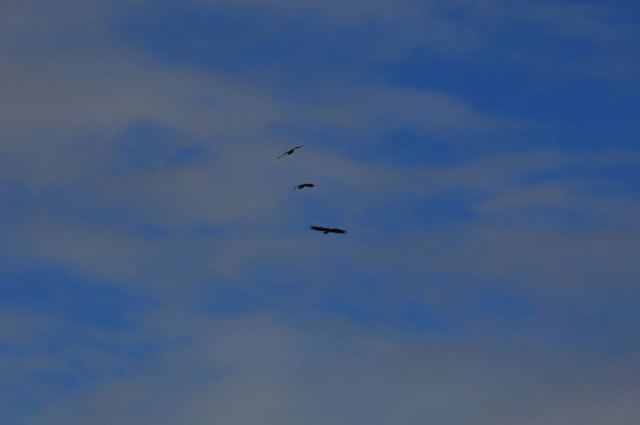 There was no sign of the Sea Eagles nest so I guess the herons have kept their place, there were many heron nests much smaller than the eagles.

This Beech tree always intrigues me, despite falling over it has grown up again and is a very strong tree. There is tons of compost below it, the best. I must remember to get a few bags by boat in the summer.

On the way back I lingered on the hill for a while watching the snow showers coming in over the Old Man of Storr then it was time to head home before it got too dark. 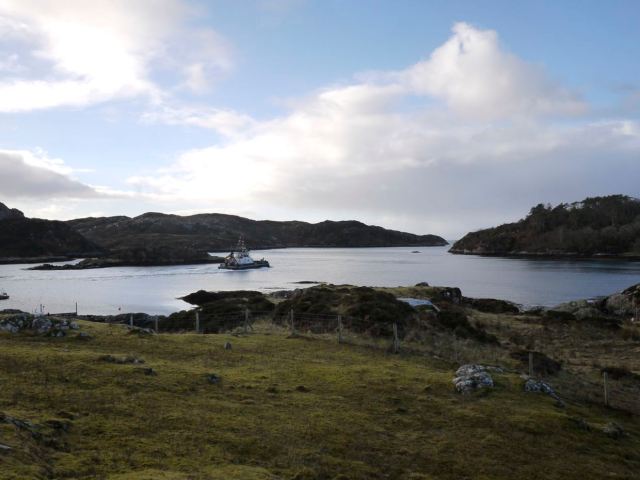 Next day I was getting ready for a few days away in Inverness, Dentists, Doctors, Family visits and shopping. There must have been a trial on as the MV Raasay came in for a look around, then they took up station at the gap.

I was down at the shore trying to get the water pump working on one of the outboards but to no avail. It was a good day for it but very cold. I was just about finished when the rain came on and soaked everything. All the tools, cloths, oils and me. 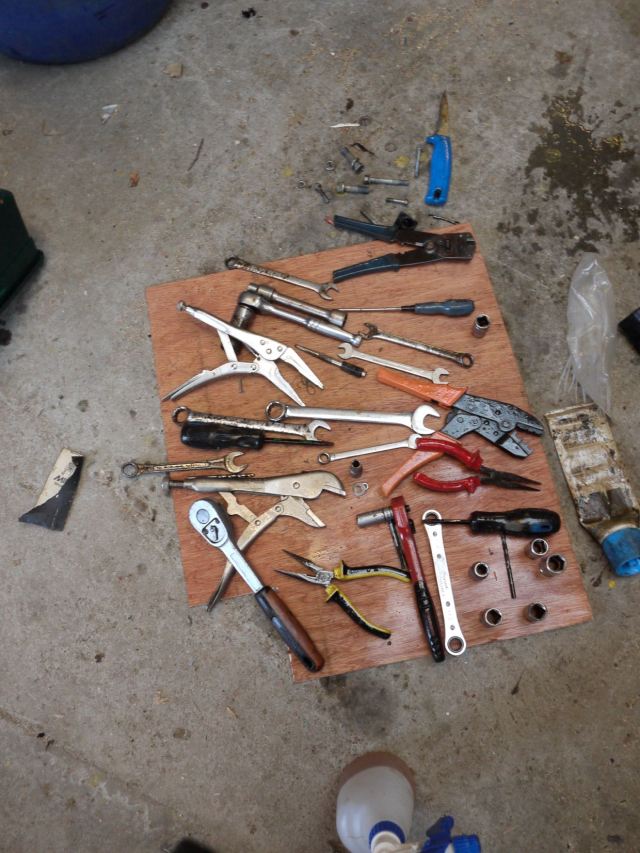 As everyone knows around the West, everything gets rusty and it does not help if you put your tools away wet, so before I left I had to drench everything with WD 40, I used whisky on myself though!!!!

Kevin arrived alone Tuesday morning the sea had been pretty rough the day before but it calmed away and we had quite a good sail to Portree, the swell was not stopping Tommy trawling away outside Portree Harbour.

I had seen an advert for Johnnie Walker Whisky, maybe it was on Facebook, who knows. Johnnie Walker – Dear Brother . It is rather sad but very effective advertisement I have to say. The thing that intrigued me was the camera swung onto a ruin which first of all looked like our schoolhouse here, but on further investigation it turned out it was one up at Glenmore on Skye. I was further intrigued to see that it still had timbers so I thought as I had time on my way between appointments with the Doctor and Dentist I would go and photograph the inside. 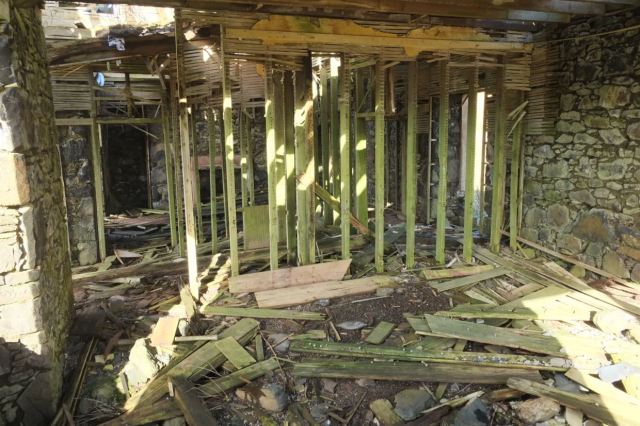 It was fascinating to see, the bits and pieces left. Although slightly different to the one here the building itself is generally identical. It seems there are many around the Highlands and it fascinates me to think how they built these houses without JCB’s, Passlode guns and all the things we take for granted. On Rona getting the material here must have been a mission not to mention the cost. More later on the History page.

I got to Inverness late after finding the Doctor could not see me and the Dentist had gone sick. Not to worry I’m never happy going to the dentist. Driving along the harbour I saw these ‘things’ sticking out of a yard. Piles of Wind Turbine blades destined for some far off hill no doubt. 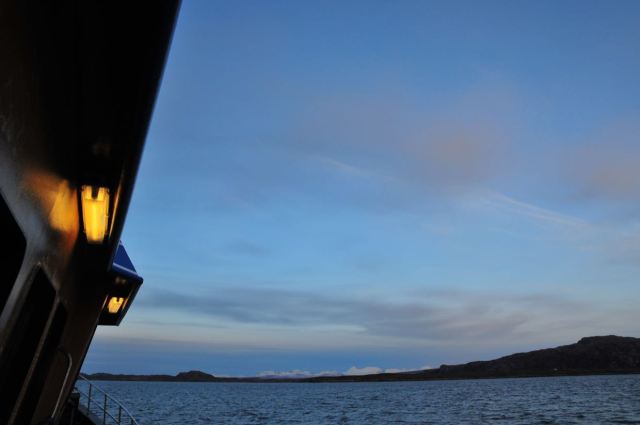 I had a good week away, Lorraine stayed at home to look after Rona, it was all boys stuff anyway she said.

After a Friday morning at the Association of the Deer Management AGM in Kingussie which was very interesting, I made a dash for Portree getting there at 4.30pm then onto Rona before it got too dark. Pam and Kevin had a lovely starlit trip back, all good until they got to Dan’s chipper it was closed, so no fish and chips that night.

Back To The Coalface

One hour before I left for Inverness I checked the genny sheds and services, all well until I got to Dry Harbour. I opened the door of the genny shed and I found the floor covered in deisel. A leak. I could not find it so, with wind forecast I reckoned the empty properties could take their chance. I shut off the fuel from all sources and shut the genny down. I got over to it on the following Saturday but I am still unsure where the leak came from, it could have been the return, I do not know. 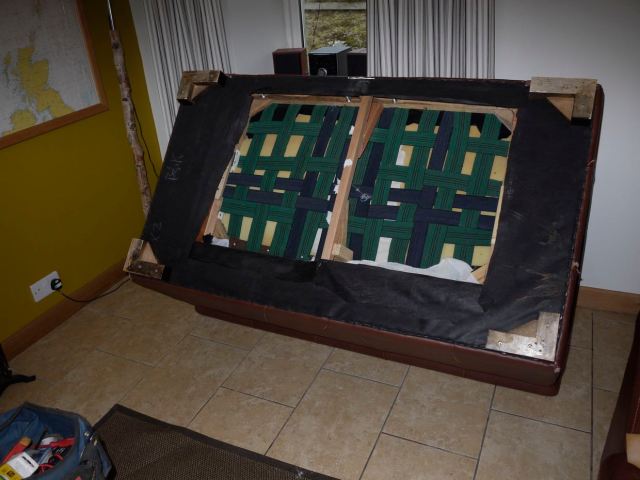 It is that time of the year after the winter and last season that we get on top of the repairs. The settee which is 8 years on Rona was a bit saggy. We ordered some new strapping which had arrived with me on Rona so that had top priority. A bit of ingenuity and we hope it will stand one more season.

I finished that and turned my attention to stove in the kitchen which had had a report that the chimney connection would need some fire cement. On closer inspection I found that the stove was basically finished, the chimney was not connected at all. We pulled it out and the whole thing is a bit of a mess. 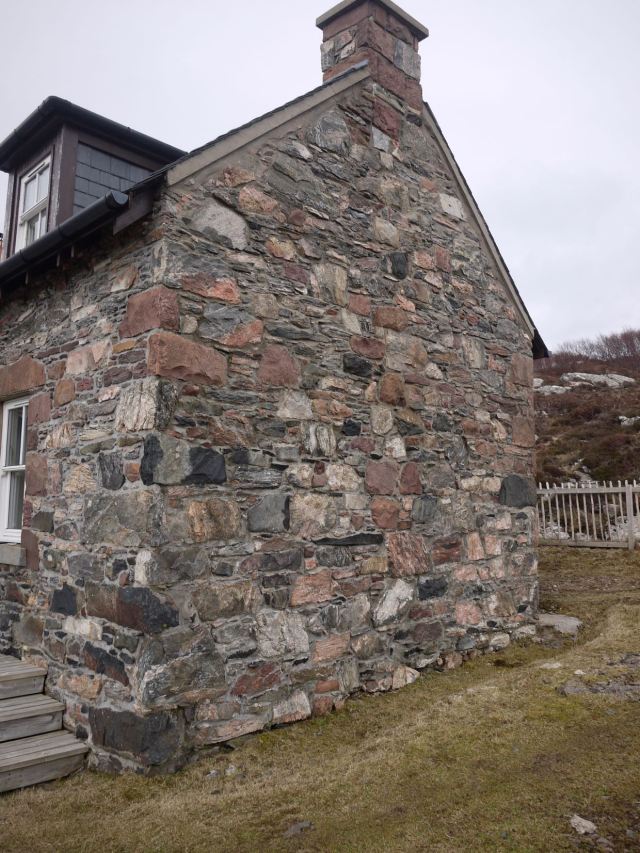 The beautiful gable is built with local stone and lime mortar, then wet dash finish. There is still some signs of it. So at the start the stonework was hidden. It has only been washed off over the years. We pointed a lot of it and that stopped water getting in. But cracks have appeared and the building I think has dried out so that now works in reverse allowing water easier ingress.

There are now quite a few major cracks and we think it best to put a wooden (false) gable wall up to deflect the water. The gable is facing South West, we await a decision. When working over at Dry Harbour we often see the sheep on the cliffs. We were aware that there was one permanent resident. I spied it when I was looking around the gable and thought to myself that sheep looks pretty stressed. Mostly they get out of the cliffs although I’m sure a few have perished. But this one had been there a while. 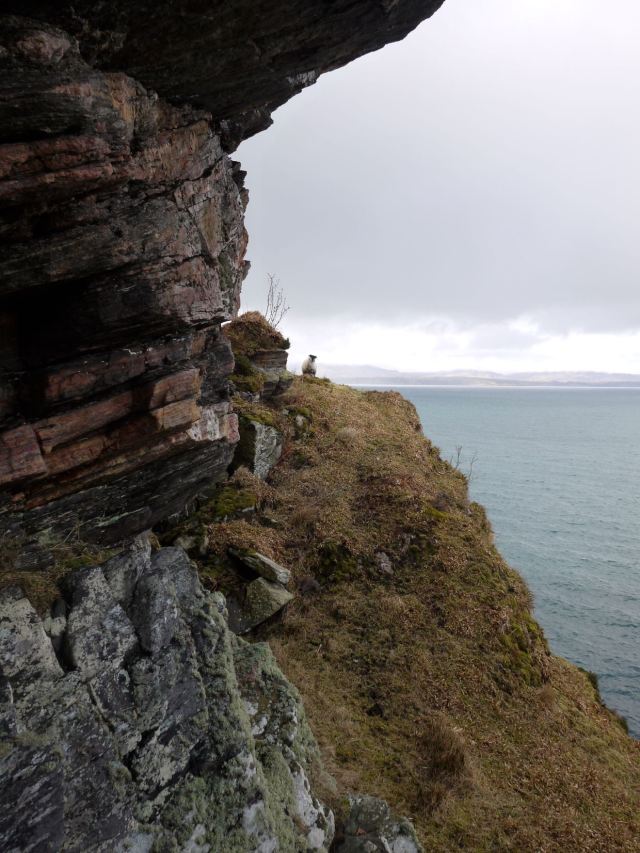 I’m just not too comfortable going about the cliffs anymore but I took every precaution and managed to catch the ewe easily, it turned out to be pretty thin and weak and I think that is why it was showing signs of stress it knew that it was not in a good place. 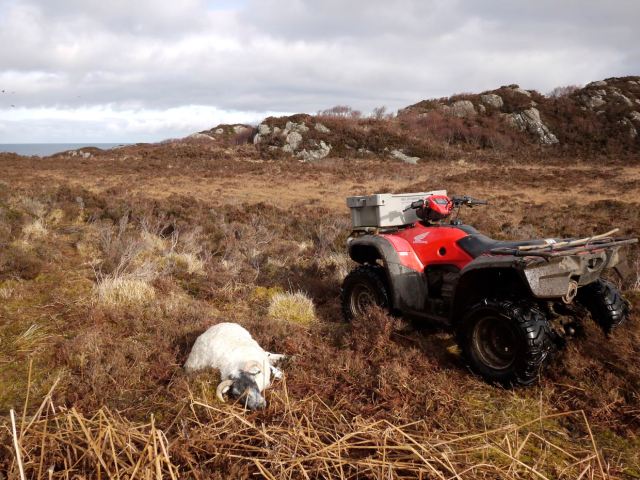 I got the ewe up to the top of the cliff then went back to get the bike as I turned into the pick up point here was one of its sisters, stone dead!! You win some you loose some. It had recently died, looked pretty healthy too but sadly that is what happens keeping sheep. 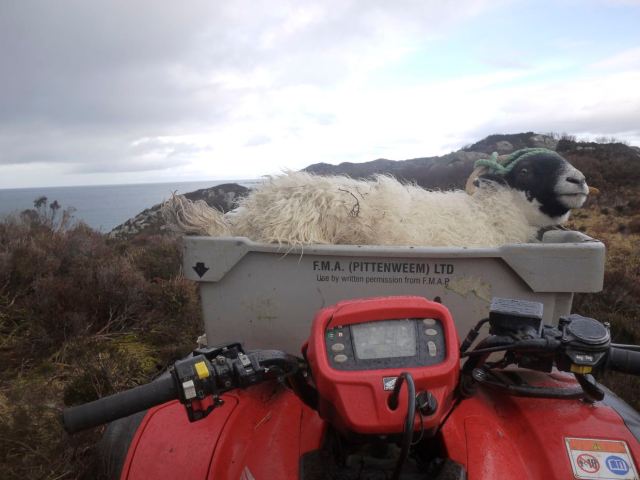 The sheep was too weak to get back to the field for some attention so I had to carry then transport it there. It was very quiet. 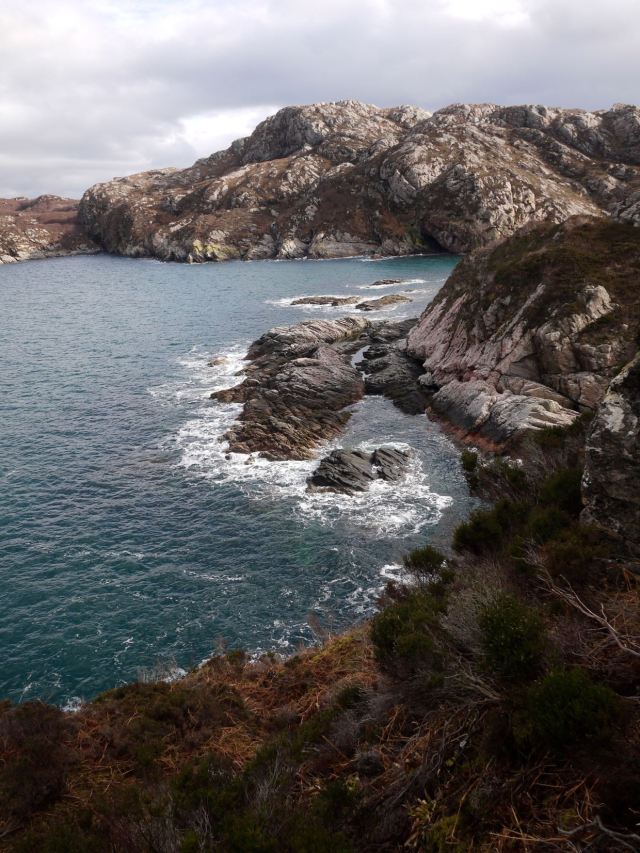 The Grass is Greener.

I’m sure the sheep find the grass very sweet up on the cliffs and they get themselves into some corners, normally we find them but sometimes they just disappear. It is not a place for the faint hearted. Julia tells me that her Father would never go over the cliffs preferring to put his neighbour over on the end of a rope, he was smaller Julia says!!!!! 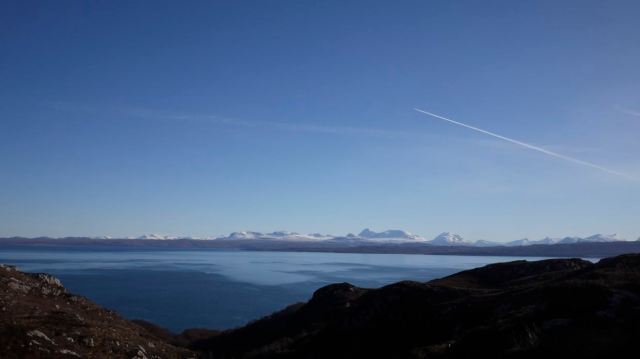 The weather is pretty awful to-day, grim does not do it justice. I hope my rescued ewe lives, it is very cold and wet. But last weekend shows the contrast, beautiful calm cold days, they make up for days like to-day.

1 Response to A Hint of Spring