Should Have Gone To Specsavers

Monday morning and it is all quiet after a busy week and an especially busy weekend. The weather at last gave us a bit of heat but sadly to-day it is back to a North wind and grey overcast. Later in the week it promises sun, we will see.

I’d been out most days looking for stags but to no avail, they were always just out of reach and very aware with their early warning system (the Black Back seagulls). We were going out this morning but awoke to pouring rain so the stags won again. Venison is in demand with the visitors and I cannot keep up, we will be better organised next season for sure. 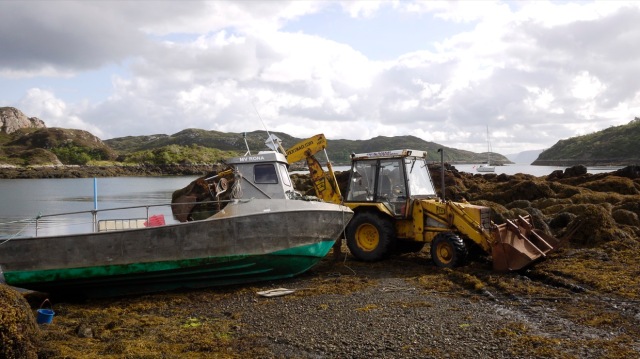 Kevin and Pam were taking over much needed red diesel on Saturday so I had to load the IBC and gear to unload it. The growth on the boat had appeared again so I took the opportunity to scrape the bottom of the boat and wash of the weed. The weather had improved and it is always easier doing these jobs in sunshine.

I’d put the boat round on Saturday morning awaiting the delivery and delivered a can of oil to the red yacht in the picture, this young family helped us out a few years ago when we were building the cabin, their oil pressure pipe had broken on the way over from Badachro. So we were happy to return the compliment with a top up of oil. They are having plenty of adventures on their ‘wee’ yacht’ having been rescued a few years back by the Stornoway coastgaurd when they got into trouble of off the lighthouse up at Gairloch, undeterred they carry on enjoying their ‘alternative’ holiday choice. 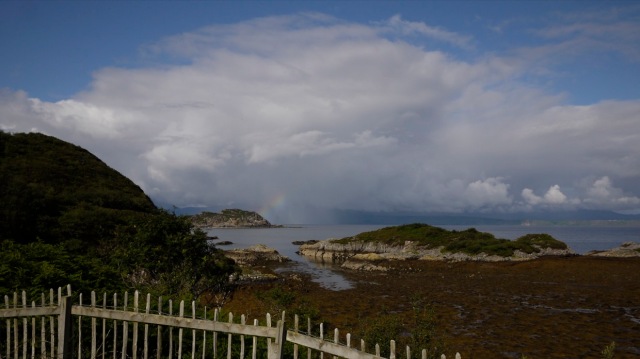 Getting to be a Bit of A Dull Moment

It was a pretty calm morning but the threat of rain was never far away. I went over to pick up Craig and his familys luggage and had to stop to take in the clouds, rain and rainbow coming over the Old Man of Storr.

The geese that breed here in ever increasing numbers certainly get about the island, they often swim round to Dry Harbour but they also like to take the road. We often get them mowing the roadside at this time of year. They will not be long in starting to fly by the way the young ones were flapping their wings.

Hugh our master shearer was coming out on the Saturday boat that Craig and co’ were leaving on. We had bought (on Ebay for £53.00!!) an electric shears but I was told not to use it until he got here. So remembering the ‘Should have gone to Spec Savers’ ad’, I duly waited. 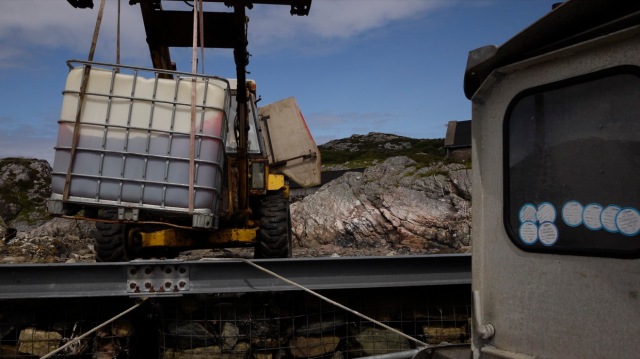 Hugh gave me a hand to unload the fuel and we got down to shearing but not after a bit of a rodeo trying to pen the sheep. I had managed to get all the sheep in, but opened the gate to get two escapee lambs back in. That seemed a good idea but it backfired when a handfull of sheep who had been near the gate immediately ran out. But Bruce who arrived with Hugh on the boat did his impression of a sheepdog and rounded them up. By this time they were spooked and despite many hands the sheep gave us the run around, however after a fashion we got them in and then got down to serious business. 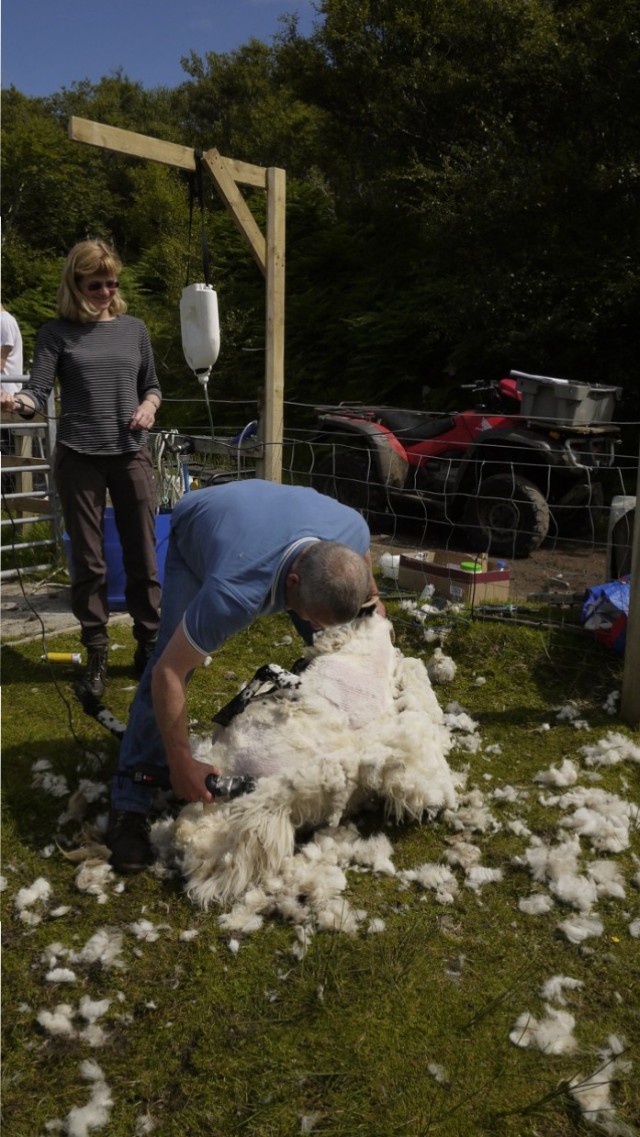 Hugh ably assisted by Angela showed me how to do it quickly and it looked, easy, much better than the hand shears. 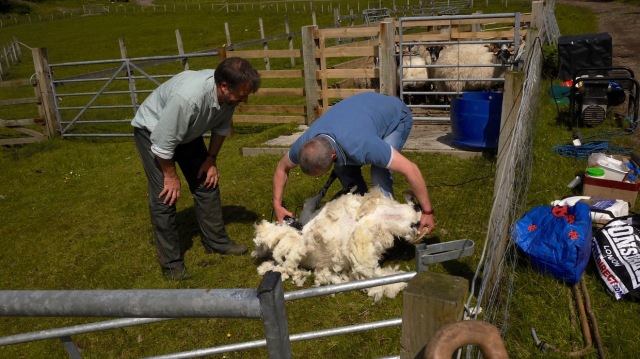 23 sheep later I think I can see the picture but Hugh was so quick there was no point in stopping him, ah well there is always next year to learn. 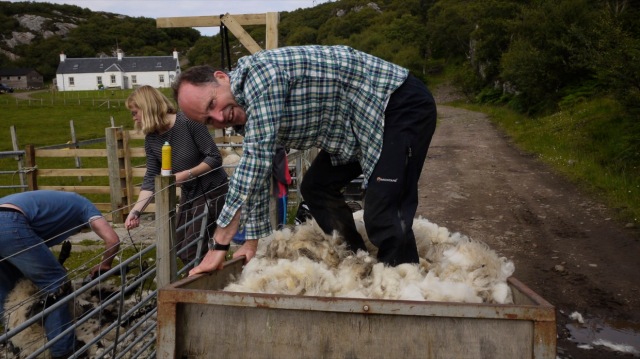 Bruce got the job of flattening the ‘quality’ fleeces, which we must do something with this year.

We got them all done and dusted, dosed with tick stuff (Dysect) and separated the lambs from their mothers, some of the yacht visitors were kept awake by the bawling lambs all night. But after 24 hours they quietened down, some have escaped to be back with their mothers’ so to-day’s job it fence repairing. After the shearing we had a few welcome beers and a good night round the table in Rona Lodge. L was up most of the night with toothache. Always the worst thing at the weekend and on an Island, we were trying to work out a strategy for getting to the dentist this week when a French Yachtsman arrived at the door. I mentioned that L had pretty bad toothache and he was happy to tell me that his wife was a dentist and was sure she would be happy to come ashore and have a look. One hour later L had her appointment and was happier after some very good advice which she was grateful for. There was no treatment, but after taking the advice L got a  bit of respite from the nagging pain. 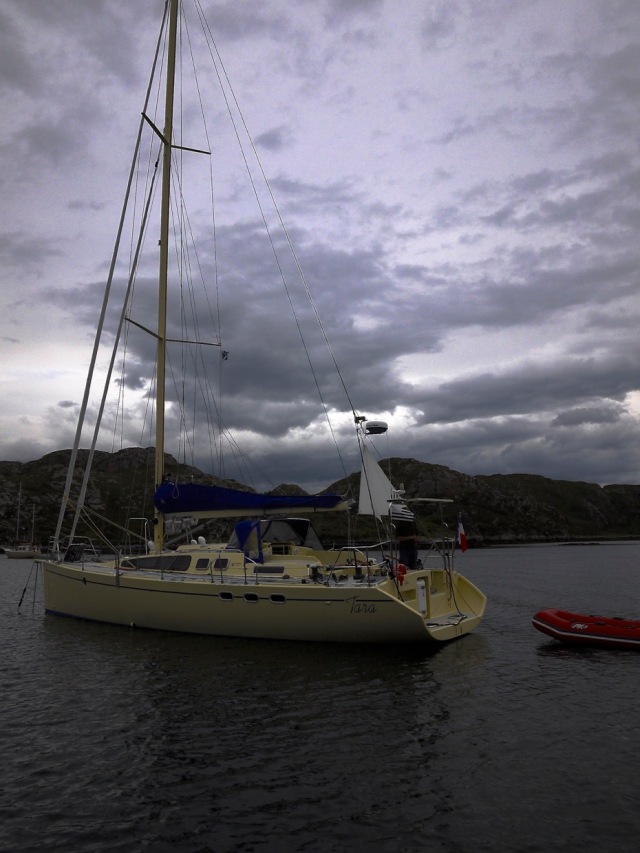 Hugh went away Sunday lunchtime, the sea was flat calm and the weather sunny but by evening the forecast had changed and it got very dark as clouds started coming in. We went out to see Castaway Claire and on the way back went over to our French dentist to say thank you. He had been telling me his boat was a one off, built to his specification after twenty years of sailing and it certainly looked impressive.

Yacht numbers are still well down despite the better weekend and double figures in here on Saturday night, it certainly added to the manic Saturday that it was. Hopefully we will have a quieter week, I think all last nights yachts bar one have left but I am sure after lunch they next lot will arrive.