That Is Nature I Guess

Clive and Ali said in their recent email ‘Oh for a life like yours’. Well!!! I’ll start with the good bit then as they say please look away if these pictures may offend you!!!

One of the Missing Sheep

On Monday, after hours of looking I did not find the twins or the Ewe, but I did find its Sister. On the cliffs of course looking for the sweet grass. Only problem is they will go further and further then there is no return. It was too quick for the twins/ewe to do this and go missing, so that is still a mystery. I tried to push this Ewe and lamb no: 4 up onto the outrun but she only went further down to the shore so I gave up. I was still frustrated at not finding the twins, so I went round in the boat for a look, only to find her sister further up the cliff but not in a bad place. But noted!! That was Monday, seems like so long ago. Tuesday I had made up my mind to look for the Master Stag’s antlers he would have cast by now so off to the South end, playing Winnie the Pooh with the guests, I could see their footprints in front of me heading South  but not them. I went off the track half way down and took the bike right out onto the moor. The paths were good, the ground very dry, crying out for burning but too dangerous for one guy I’m afraid. No antlers, nothing on the paths and needle in a hay stack was springing to mind as I got back to the bike then just 50 metres before I got there,  out of the heather was an old antler from the Master Stag, excellent. 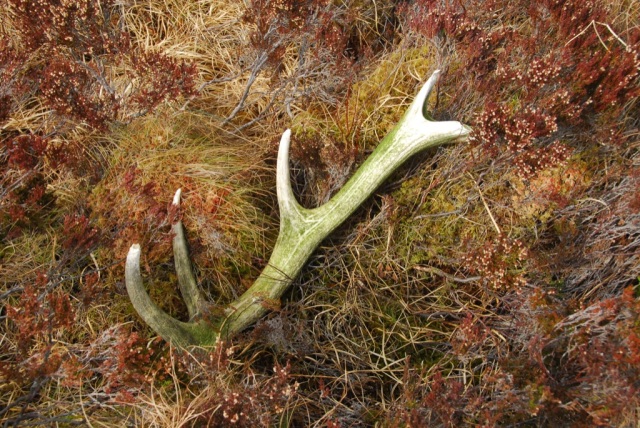 It was a bit chewed but matched the one George found two years ago about half a mile away, now for this years. I got on the bike, knackered after yomping through the heather then just over the hill I came upon the remains of a cow, one of our Highlanders  but it had died well before my time, I think I had seen it before from a distance but not close up. Amazing how the bleached bones just sit there, must be over 11 years old.

Reminds me of Texas

Well that was Tuesday. To-day Wednesday it dawned very bright, freezing, cold white frost on the ground, how the lambs are surviving these temperatures is beyond me. And there is just no grass in their bit of outrun for the mothers. Quite worrying. I had a gasket to fit on the generator at Dry Harbour and that was priority, Gemma had phoned and told me the Seaflower was coming and would I like to join them for lunch? result!! She also told me that Killer Whales had been spotted at Rhu Raidh Light House (Gairloch) heading South on Tuesday night.

So with no cooking  to do I got on with the servicing and had a pretty full morning, even the cottage laundry dried. I just got finished when MV Seaflower arrived. Half an hour later I got a phone call, Gemma had forgotten to put the wine glasses on board after their ‘dishwasher’ spring clean. So it was a good trade, a lunch for some wine glasses.

It is not very often I see this side of Seaflower but when I got back to the house I had an urgent call from the Base/Qinetic. Graham the manager reported that one of the staff had seen a deer trapped in the fence up at the heli’ pad and it looked to be in big trouble. After getting my stuff together I called them back for more details but they were pretty sketchy, so I grabbed some wire cutters and the rifle, jumped in the boat and took off. 20 minutes later I was up there and Gordon was waiting for me in their landrover.

This is where you should skip to the end. Be warned.

I got a run up to the Lighthouse and was very distressed to see a deer caught in the pedestrian gate. I quickly took in what had happened and had no option but to put the poor animal out of its misery. Very distressing to see this, unfortunately for me not the first time and it would surprise people just how often deer do get caught. It was a hind, probably one of the best we have, in calf of course. Sadly there for more than 24hours. She had a major fracture and I could do no more than put her out of her misery. I guess it was fortunate that the guys had seen it and we could bring the situation to an end quickly. But all sorts of things go through your head when this happens and quite honestly you do not really want to kill another deer in your life once you have to deal with this. It is pretty raw but that is nature, the real world, that’s what happens and you do take a lot from these situations. But many folk living in the country deal with these things day in day out and just get on with it.

There is a group of hinds up at the North end and this one I am sure would have been the Matriach. So the small herd  will be getting on with it, sorting out who’s now in charge, who is the look out, who makes the decisions. Interesting stuff I guess. I look forward to seeing them sometime just to see what has happened. In the meantime, who would have guessed I would find this situation on ‘remote’ Rona? 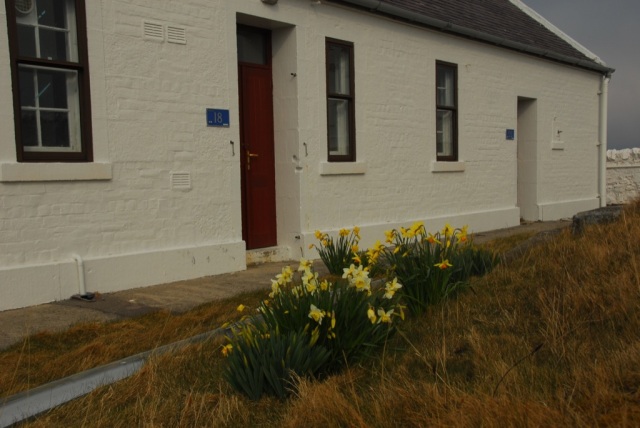 The Beauty of Nature

I came through the gate after dealing with the hind, we gave her to the eagles. The first thing that caught my eye was the daffy’s. All of Britain is struggling to grow them and here in front of the Lighthouse cottages they are blooming, quite surreal the lovely show of colour after what we just had to deal with.

I had a tea with the Qinetic guys and it was good to see them and get their news. Lightened up a rather poor day. Late afternoon I headed back to Big Harbour, passing Dry Harbour I spotted some sheep in a pretty inaccessible place. I had a look with the boat and made a mental note after tea to go and have a look by foot.

Got home to many messages, Calum, Irene, Arlet and John are coming for dinner tomorrow from Fladda by MV Kestrel and the sheep were nearly in the house looking for food, Spotty looking for Cat biscuits no doubt. So I sorted all of that, made the plan for dinner tomorrow night and then had a nice plate of Shieldaig prawns for tea. Once that was finished I headed to the cliffs to see if the Ewe and lamb were in trouble, yes of course they were. Easy to jump down but not easy to jump out. So nothing for it but a bit of rock climbing and I have to admit I don’t like it. I get vertigo now, something that never bothered me. So here we are clinging to the cliff trying to get to two very uncooperative sheep.

The ewe was easily caught I think she was hungry. I put her up top and the first thing she did was start eating. No word of her lamb she never looked back. I caught the lamb and threw her up too. Then they took off no doubt heading to the other cliffs for more grass. I think I’ll be back there in two days looking for them again.

Funny how things go, the highs and lows. The unknown of what is going to happen to-day or tomorrow, the unexpected. Possibly that is what makes Rona what it is. You just do not know what’s round the corner. Tomorrow is a new day and no one will know what happens next.

What was it Forrest Gump said ‘Life is Like a box of chocolates, you never know what you are going to get’

I've been living on the island since April 2002, alone for the first 5 years, my partner L joined me in 2007. We manage the Island for a Danish family who bought the Island in the early 90's. Their hopes for the Island are to make it self sufficient supporting its inhabitants and that is where we come in. We look after the stock, 3 holiday cottages, machinery, boat and of course the visitors. It is pretty challenging but it is a beautiful place to live and work, we love it and strangely enough we love it even more in the depths of winter when all is quiet apart from the gales and rain. We do a bit of fishing, stock work, stalking deer and loads of other stuff. We have good support from lots of people whom we have met over the years and have become involved in the Island. Too many to mention here but keep an eye on the blog, they'll be there for sure in the future.
View all posts by Bill Cowie →
This entry was posted in Daily Doings, Wildlife. Bookmark the permalink.