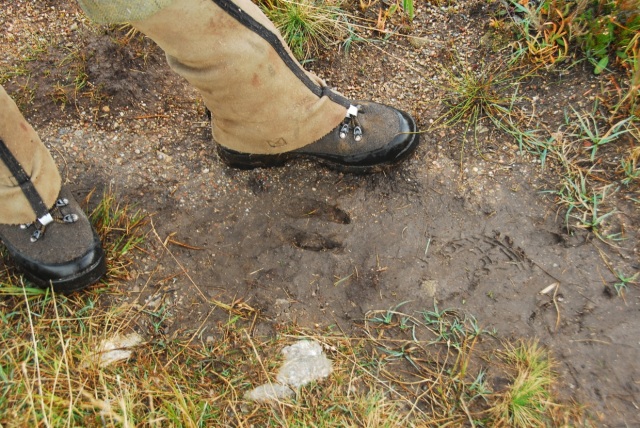 We have just finished the weeks stalking and entertaining guests, it’s a hard life!! Wallace left Thursday and Iain and Margo Bennet arrived on the ferry taking him and the stags off.

The week started great, too great with Mediterranean heat, then gradually deteriorated until to-day Monday, full gale, pouring rain and a full house in the holiday cottages. Thank goodness I’m not stalking!!

We left the blog last week with good weather promised and we were not disappointed, Wallace dog enjoyed himself usually flaking out every night after a massive walk. The stags were hard to find and Rona did not disappoint with hard walking and long spying. 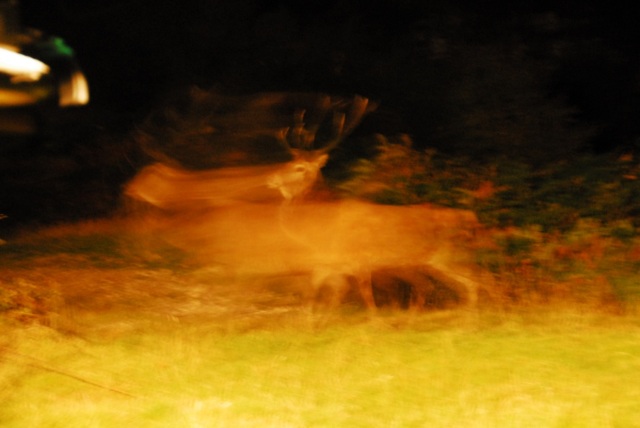 Wallace had heard tales of Eric the Master Stag and was keen to see him. As much as we spied during the day we could not find him, even going to both ends of the Island, needle in a haystack was mentioned. However when we were having dinner that evening, lorraine heard a very loud roar when she was coming back into the house after fetching the ice cream from the outside freezers. We put on the spotlight at the front of Rona Lodge and there he was, Eric in all his glory and a few hinds, Wallace was amazed. He hung about oblivios to us but then after a few minutes bounded off into the forest. 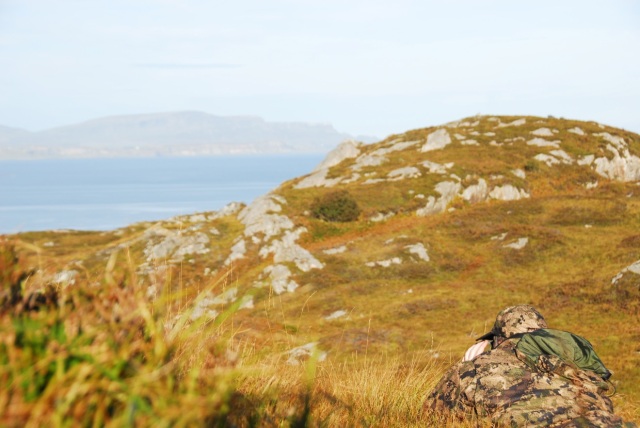 Next day it was back onto the hill and spying, thoughts of Eric in our heads. We had temperatures in the teens and no sign of any rutting stags but then we spotted a younger one with hinds, a cullable stag so we took our time and after an age got into position, ending with a successful shot.

On the way to the larder we picked up on more deer but always hinds.

That afternoon we headed South and after a lot of walking and stumbling into deer we came across this stag with hinds, roaring away. Wallace was convinced that this stag was a different stag and there is some debate that there is a sone of Eric so we called this guy Derrick, however after blowing up the photo’ I’m still not sure. 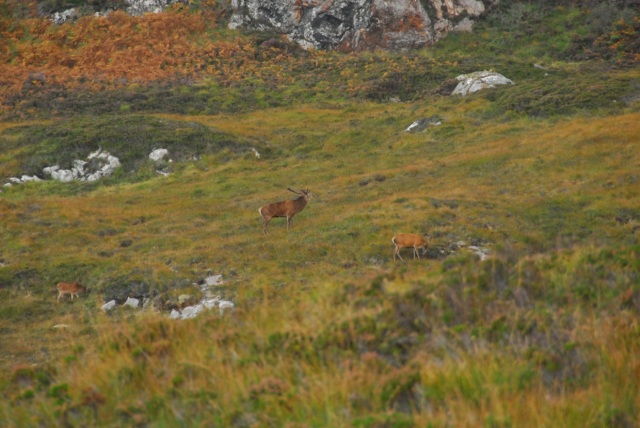 We left him too it and went further South but nothing was showing just plenty hinds, the sun finally went away and the impressive cloud formation ended the ‘long’ day. 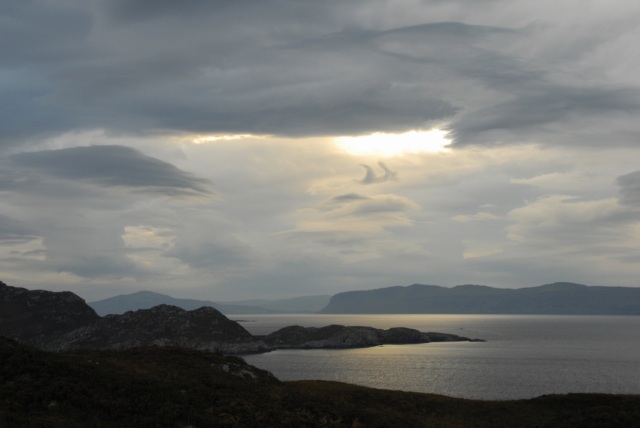 Next morning it was back out and onto the high hill just South East of Dry Harbour. We were just lying there taking it all in when the Qinetic helicopter taking the staff up at 8.30am passed just over our heads, the deer we were watching never bothered even to look as it passed close to them on the hill further North.

We were looking for the fourth stag and a mature one, we spied for a long time and saw plenty deer but not the right one, then just as were about to move one we had a chance and to cut a long story short, Wallace pulled off a very good shot and that was the stalking over.

I madse my way back for the ATV to collect the stag and came across this group of mushrooms/toadstools, I don’t think they are eaters?

It was quite an easy drag out with a little help and with that we headed back to the larder.

We were still keen to see if Eric had a son so we went out that night but just to look, there was exercises on in the Inner Sound with two Subs’ about. Made for interesting viewing whilst spying for deer. 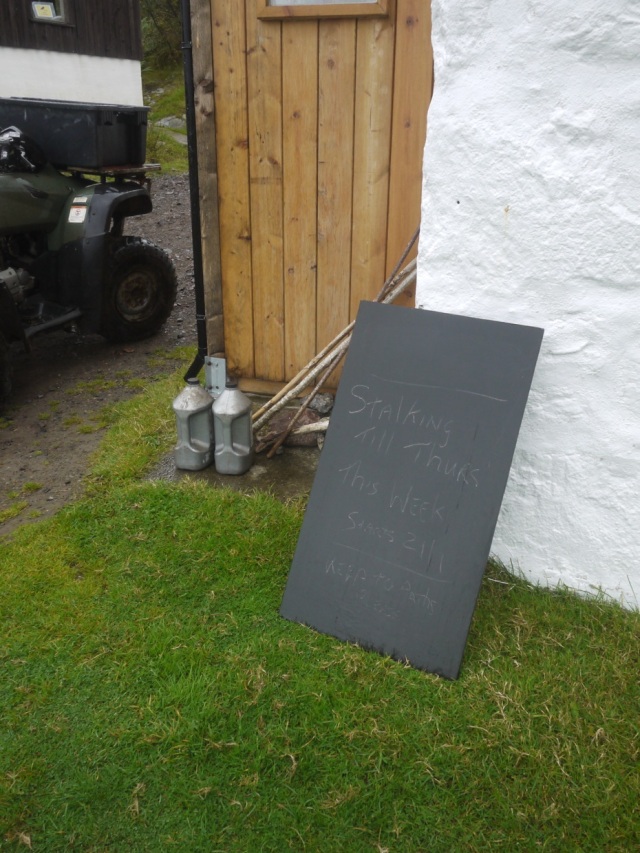 All too soon it was Thursday, Kevin and Pam were coming and the rain arrived too. That made for a difficult start but we got there and had rigged up a platform after last years experience loading deer. Wallace kindly took the carcases of two of our cull deer to the Dingwall Game Dealer, Fyne Game and left around lunch time. On the ferry coming were old friends, Margo and Iain Bennet. Iain was the Head Stalker at Strathviach Estate between Ullapool and Dingwall, some 39,000 acres. Iain born in the middle of Glasgow and starting work as a trained chef would not have imagined ending his career on an estate this size, looking after over 1000 sheep 100+ cattle and culling a lot of deer.

When he saw what was happening he quickly turned too and helped load the stags, retired over 5 years he showed no signs of old age and looked as fit as he was when I first met him over 17 years ago!! His story inspired me when I was working for Prudential (1986-89), I used to go up the Strathviach glen to see them on my round. Always wanting to be a ‘keeper’ or at least work in the outdoors I often thought that if Iain can get there so can I. And here we are. 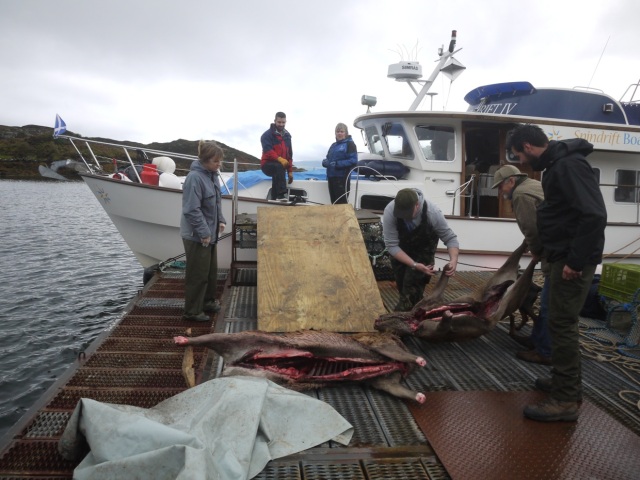 After a busy few days it was good to relax with good company and of course show the folkjs around but go to the hill for a spy. I was keen for iain to show me the ins and outs of the Gray’s Telescope, favoured by hill stalkers since years. I was given one but until Rona seldom used it. In fact it has spied more boats than deer. So we headed off to the hills to look for Eric. 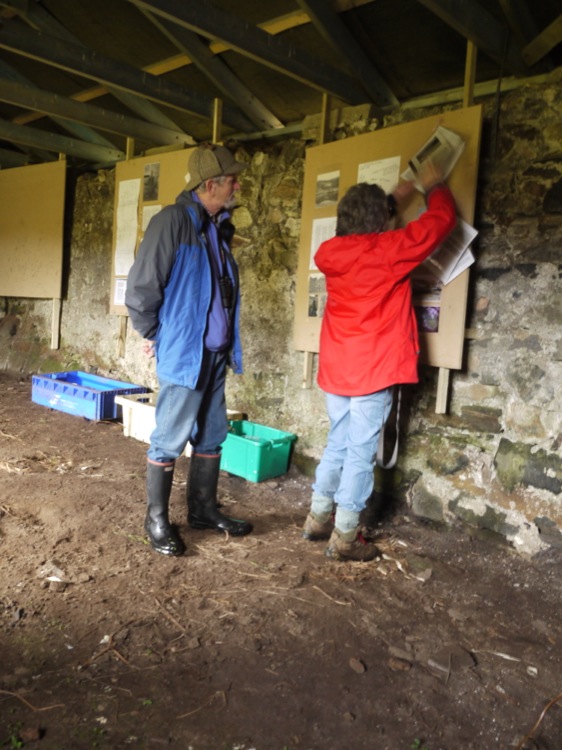 Iain and Morag Check Out The History.

We did in fact find a stag that looked very like Eric but Iain, with his telescope was sure it was not the stag in the photos, in fact younger with a smaller head of antlers. We will see. 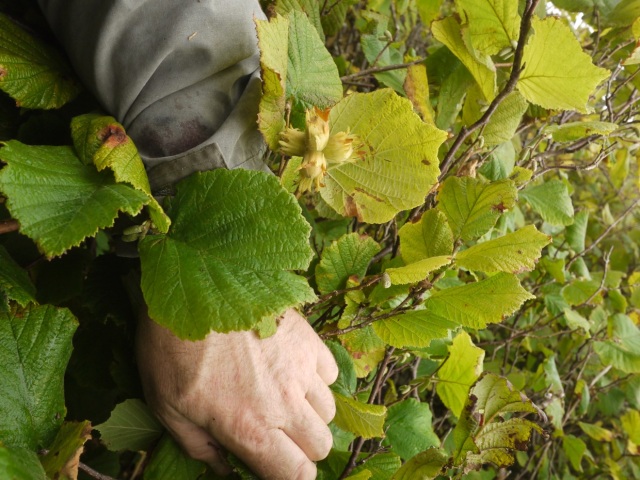 After a spy we found Lorraine and Margo in the bushes picking hazelnuts. Debbie our cottage guest joined us and we collected a bucket full, now to crack them. 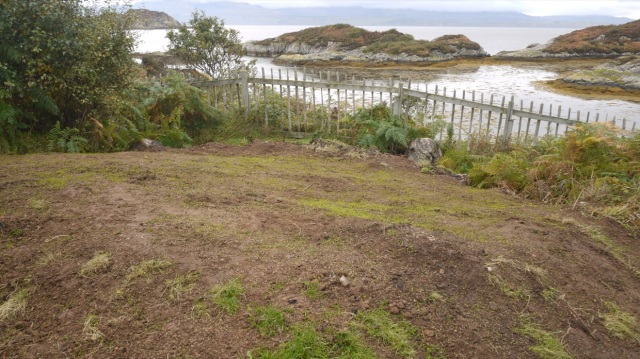 The weather this week has been so warm and it was no surprise to see 1 inch of grass growing where I had sown it the previous Friday, nuts or what.

After everyone had left it was down to the hard work, with a 300lb stag in the cooler to butcher three days of standing filleting were the prospects. Out of the blue (or should I say grey0 a yacht appeared, a quick spy and here was Yacht Aisling, Ronan Martin and Francis. We had not seen them for maybe a year and it was a lovely surprise to see that baby Seamus had joined the crew, they were grabbing a few last days with their three month old son on the yacht before it was laid up for the winter. The forecast had frightened them so the headed for our mooring and at this moment are bouncing around out there in the half gale.

Next day, 6th october I headed out as usual for a look for deer. I just got down to our first viewing oint, got off the bike and there was this almighty racket, the Stornoway Coastguard helicopter came right over my head. It must be the week for low flying. We need to know the deer we have to assess the possible cull figure for next year, again the helicopter did not scare them, they must be quite used to them by now.  I saw lots of hinds but again no real stag activity. But right at the bottom of Rona here was a real Royal stag with eight hinds, so there are more stags on Rona.

Back to Big Harbour and the rest of the day was spent being a butcher, and tomorrow and the next day….. The shooting is the easiest bit!!!!

I've been living on the island since April 2002, alone for the first 5 years, my partner L joined me in 2007. We manage the Island for a Danish family who bought the Island in the early 90's. Their hopes for the Island are to make it self sufficient supporting its inhabitants and that is where we come in. We look after the stock, 3 holiday cottages, machinery, boat and of course the visitors. It is pretty challenging but it is a beautiful place to live and work, we love it and strangely enough we love it even more in the depths of winter when all is quiet apart from the gales and rain. We do a bit of fishing, stock work, stalking deer and loads of other stuff. We have good support from lots of people whom we have met over the years and have become involved in the Island. Too many to mention here but keep an eye on the blog, they'll be there for sure in the future.
View all posts by Bill Cowie →
This entry was posted in The Views and of course the weather, Wildlife, Yachties. Bookmark the permalink.

1 Response to Looking for Eric.