At Last ‘A Weekend Off’.

Here we are rushing about trying to get everything done so that we can escape to Inverness for a few days. We are away to Barcelona on the 5th of November so a pre-holiday shopping trip is in order. We have not been off Rona since we had our weekend in Orkney so this one is long overdue. (That was a few days around the 15th August!!).

Back to this week, as usual plenty to keep us going most of all the weather. Ronan, Francis and baby Seamus were still here on Tuesday morning but slipped away to put their boat in the boatyard at Broadford that night. The wind sort of blew 20 to 40 knots most of the time they were here but the managed to get ashore Monday night for showers, calls and emails. After a walk to Dry Harbour they came in for a ‘wee dram’. 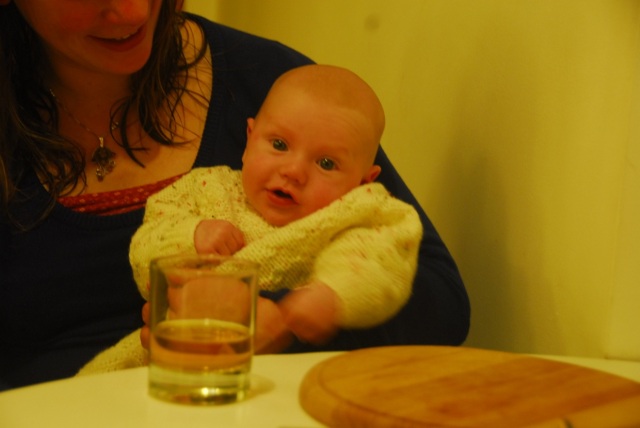 It quickly got dark and when we stepped out the back it was clear the wind had picked up and it was blowing again. Their yacht was just 25 metres off the pontoon but we thought it better to go down and shine some light on the gap. As it turned out it was ok! but we still had a safety line, just in case.

Next day it was back to the larder to finish off the carcase I had been working on, just the mincing to do for some burgers and sausages. I had a few emails and calls to make first and around mid morning our resident hinds made an appearance. 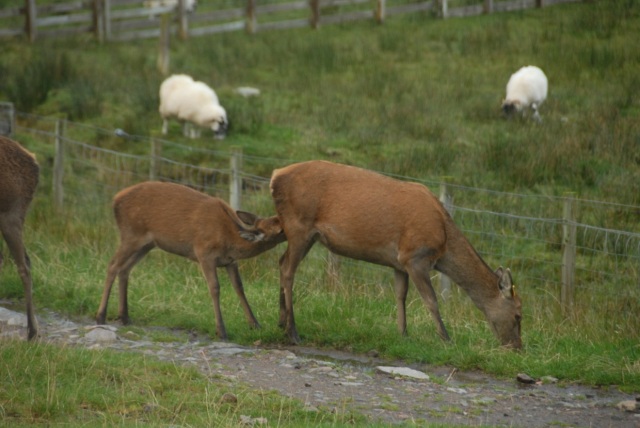 Here’s Julie with yet another calf and she looks pretty good for a 12 year old hind. Finally around 7pm Tuesday night I got clear of the venison and sat back with a very enjoyable dram. When I finished I went to wash up and found there was no hot water, we put on the central heating and no hot radiators. What was the problem. It turned out that the circulation pump was kaput and next day when the wind swung round to the North I was out the back in the hail, rain and wind trying to fix the heating. After much cursing and getting very wet I fitted a new pump, only to see that it was back to front. This was the way it was and for a long time I was unhappy with the way the heating was working. It was a surprise that it worked at all but you can place the pump on the return so it turns out, not such a disaster after all. 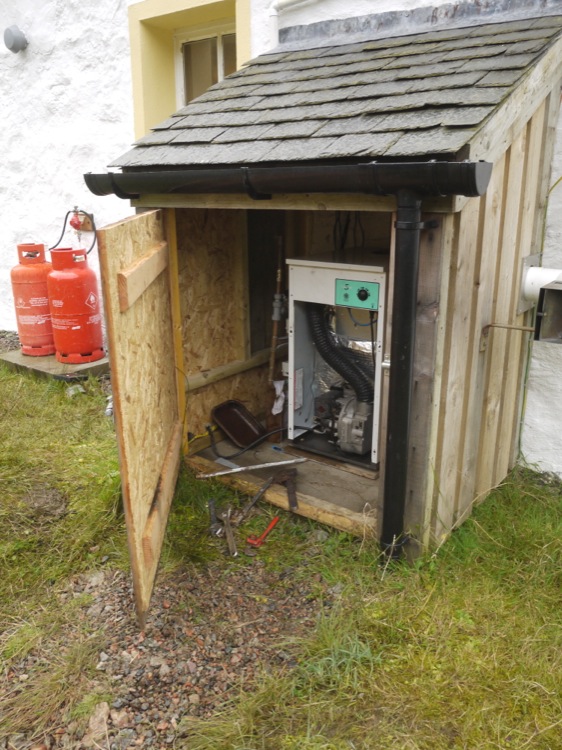 We have learned to keep a few spares and thankfully we had two new pumps in the shed, it also turned out that the washers were missing from the connections and the joint was so tight, but after a few choice words I managed to get the pump off and the new one on. Lorraine had been all morning setting up the sausage maker and mix and the rest of the day was spent making venison sausages (which we have just had for lunch, very tasty). 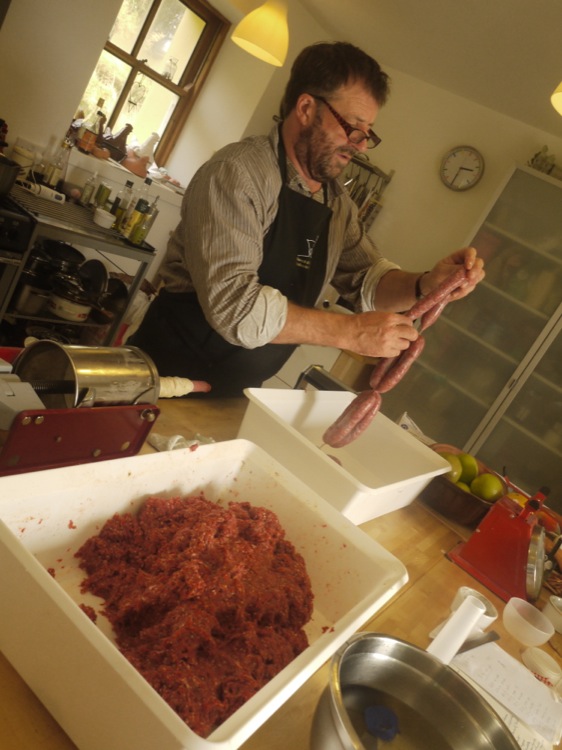 I took a run over to Dry Harbour at last light looking for stags but it was far too dark, all I succeeded in doing was bogging the bike in the dark, a very trying day. 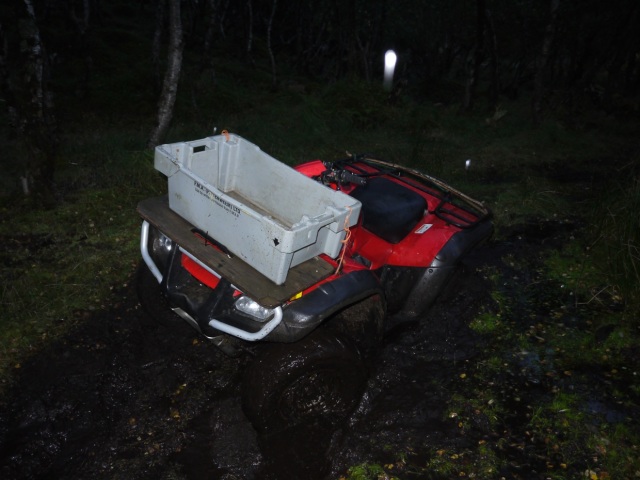 To-day Thursday it was up in the dark, checking the heating and water then out as it was dry to Dry Harbour again looking for stags, I was not disappointed. I heard the first roar as I got off the bike East of Dry Harbour, then I climbed the hill to spy over the area, here was a parcel of hinds down above the well. Then a big stag, possibly an old Royal came over the hill, roaring. I crept in on them and watched them getting a viewing place just below the windmill, but as I got into position the old royal that had looked like he meant business walked away, then I began to hear a noise like someone breaking sticks. 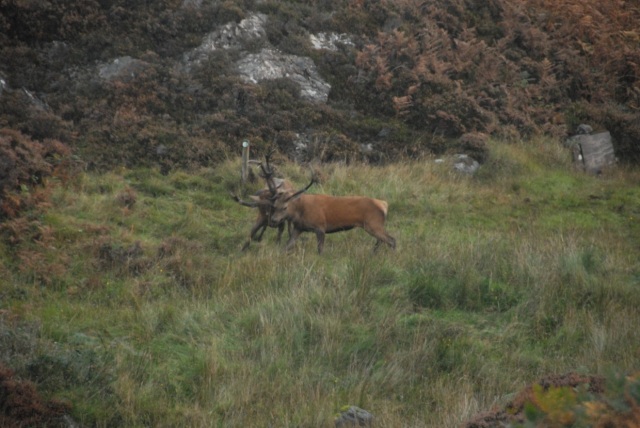 I crawled forward and looked into the valley, here was Eric and the Royal I saw the day before in the South having a fight. I watched them tussle for fully 20 minutes, great clumps of grass and peat were thrown about as the two stags fought for the onlooking 12 hinds and calves. They locked horns for three minutes and I thought they were stuck (it happens) but they slid apart and continued their dance. 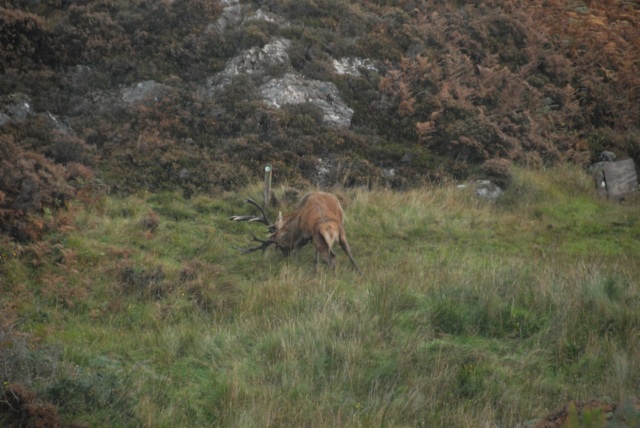 Eric and the Royal.

No wonder the old royal had left. There was more roaring about but I was concentrating on the fight and trying to take pictures, fortunately I had the Nikon with me and although it was not fully light it did better than I thought. 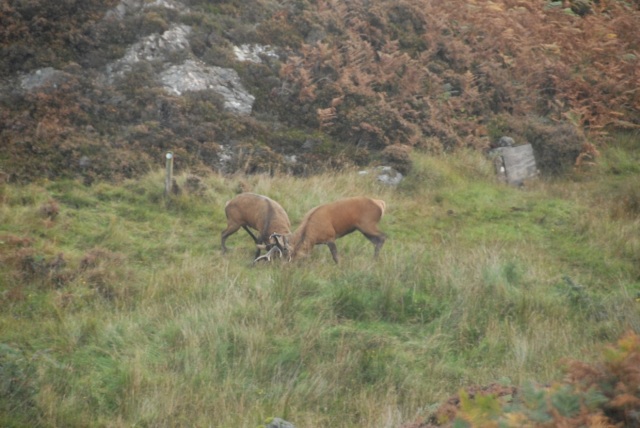 On Wednesday I had taken the ‘remains’ of the carcase out to Dhu Chamas to bury them at sea and pick up the lobster pots. I got two lobsters which are always welcome but I was a bit annoyed I had not taken the ‘big ‘ camera. The Sea Eagle quickly appeared when the ‘bits’ were floating on the surface and landed not 25 m from the boat, then after a while he took off and came across the front of the boat picking up a fish, not the bits of venison fat I thought he was looking at. That will teach me not to take the Nikon.

Back to the deer, fully 20 minutes into the fight there seemed to be deadlock, then all of a sudden the big royal pushed Eric aside and was able to have a dig at his ribs when Eric took the wise move and beat a retreat. It was over in a flash. 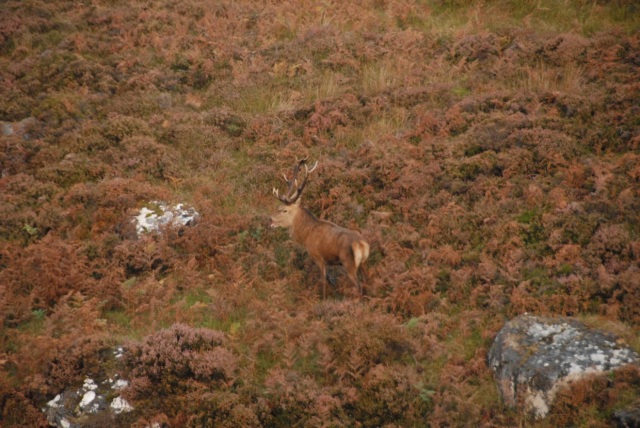 The Royal then looked around for his hinds and started to round them up roaring almost continuously. He headed to the top of the hill and was still making a racket when I crawled away. I was thinking the guests at Dry Harbour cottages would have had no sleep with the noise but later in the morning when I took fuel over to the generator they reported a perfect nights sleep. 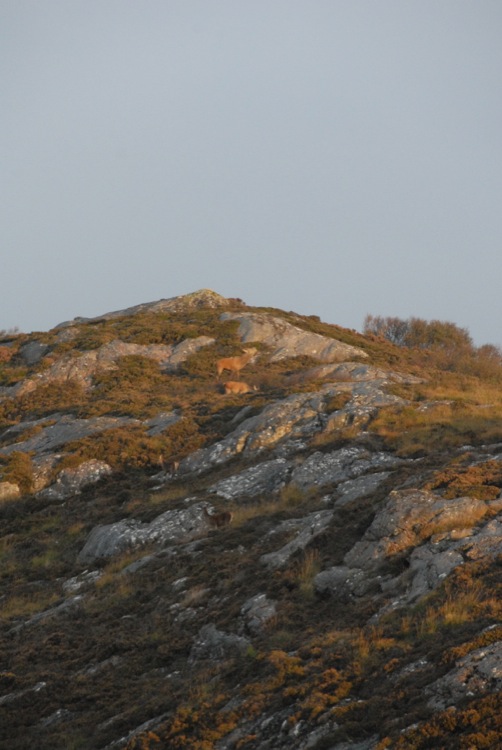 Lording over his Hinds

I bumped into a young stag with one hind on the way home but he knew me from last week and did not hang around. The sun was up but the light was fantastic, looking over to Torridon I was not surprised to see snow on the tops. 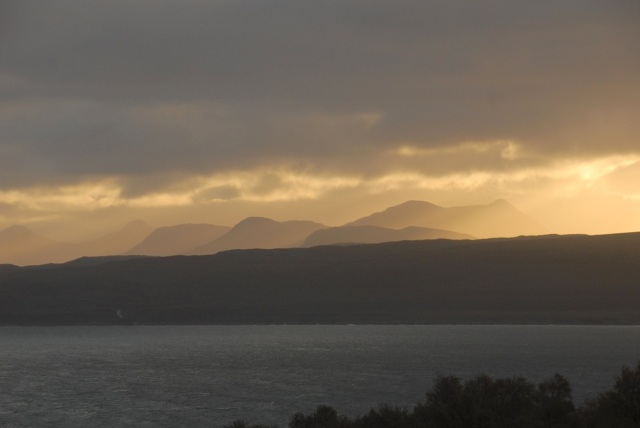 The rest of to-day has been good, we are getting ready for off and have lots to do but hope to get a look over to Dry Harbour just before dark. Been a sunny but very cold windy day, a great stalking day but I’m afraid, fueling, servicing and tidying takes preference this Thursday.