To-day is the ideal day for catching up on paperwork and mail, there is a gale going outside with heavy rain falling since first thing. There was an break around 8am but it has returned to grey.

The View from the Window to-day, trying to Tear the Tarp of The RIB

I’ll need to go outside and tie down the tarpaulin on the RIB, not expecting this at this time it is just slung over the boat to keep the UV off it. It must be blowing 30 knots just now so even although it is relatively sheltered it is getting worried by the wind. Even the sheep scattered from below the house just now, something must have been blown about to lift them from the shelter.

Hard to believe it was like this above last night.

We had some creels getting in the way of the next project. They were on the grass which had started to grow through them so rather than stack them again we put them out to see if we can catch some shellfish for ourselves. It was a lovely evening last night for it. Not a boat to be seen although there were 6 or so fishing boats out during the day.

No yachts though. Very strange coming into the harbour and no one there!!! A perfect evening for a G n T in the wheelhouse too!! 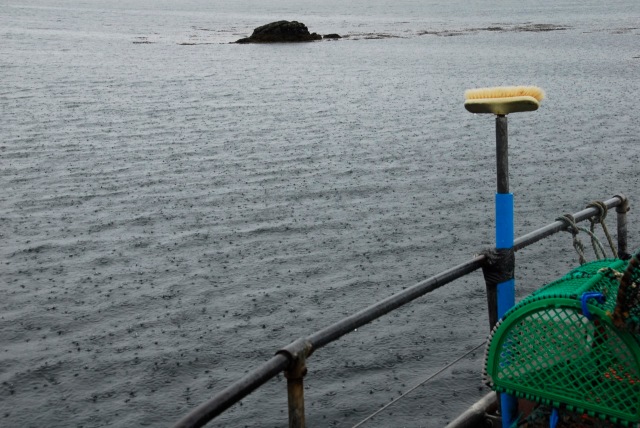 It was not so perfect at 7 am, we loaded the creels then to catch the tide, it makes for easier loading. We were promised rain and boy did it. The wind went round to the North and it was an especially bitter morning. But soon cleared and it was possibly the warmest day so far this year. 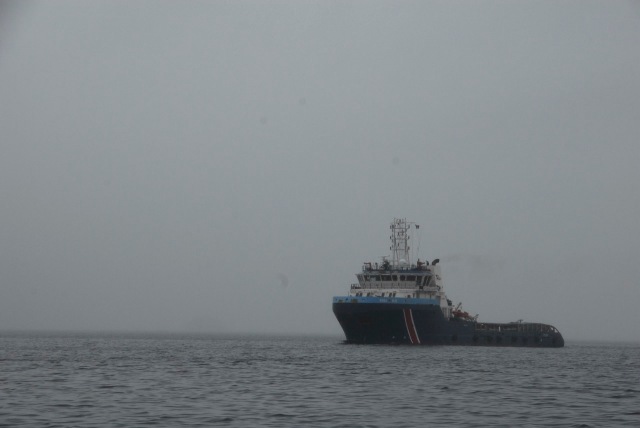 On Wednesday a Grey Trip to Portree

We went to Portree on Wednesday, it was a grey start then too, misty, murky and cool. The Coastgaurd appeared out of the mist when we were heading home, nothing to report in Portree, very quiet which still takes a bit of getting used to after the past few years.

A Quick Stop on Fladda. The First Amazon Parcel Delivered, Ever.

We had some groceries to pick up for our neighbours on Fladda, they had just arrived on the Island when the Lockdown came into force so they are stuck there, no complaints though. We dropped of their stores and Erlet was delighted to see the very first Amazon parcel to be delivered to Fladda. We had a chat, discussed the Planning application for a new fishfarm North of Fladda in Loch a Sgurr, keeping social distance of course. 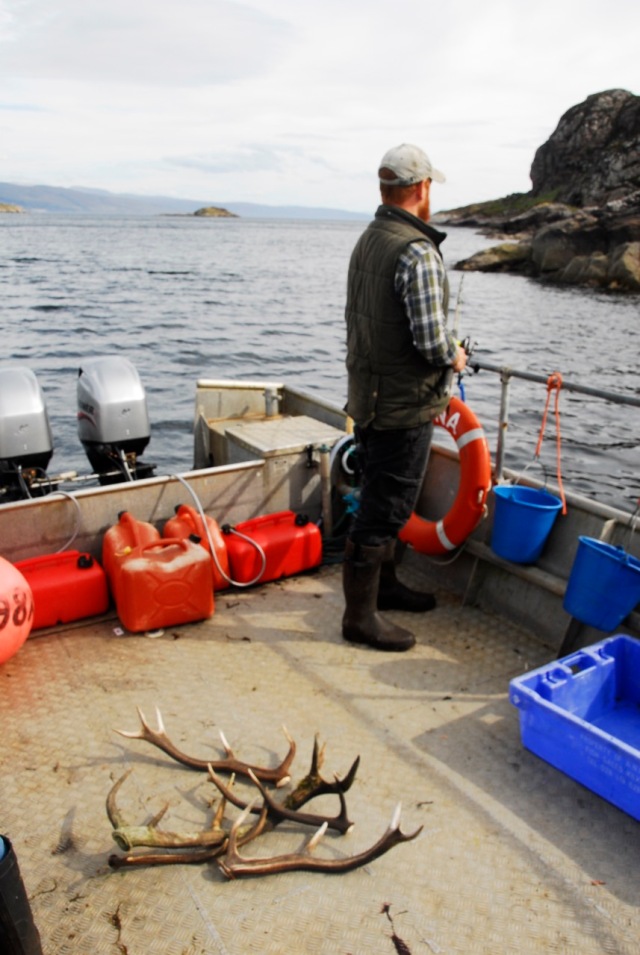 Once we left them  we had the boat all up and running  so I decided to have a look South for deer from the boat.  We had done a cursory deer count this year but our helpers were unable to get to Rona for it so not it was not as thorough as the usual count. There are predominantly stags hanging about the Islands South of Rona so a count there is always worthwhile. We went ashore and came across some cast antlers and 8 stags.

On Tuesday morning I fed the sheep as usual, the lambs loving playing around this boulder but they look very miserable to-day out there all hunched up and getting very wet.

Dying at My Feet

After I fed the sheep and went up to the garage to collect something, a 30 second trip. I came back down and here was one of the Wedders lying down on its back by the shed, in the small ditch. Unable to get up it was slowly drowning (I actually thought it was dead). I sussed that one of the older Wedders had butted it in the side knocking it over, they were looking guilty as hell and this sheep gets picked on. I turned it over and stood it up but was struggling to get it steady, I called for help and we held it up for 15 minutes, it slowly cleared its lungs and became more steady. After half an hour we were able to leave it in the garden of Rona Lodge. It survived but it is amazing how quickly things can change, a narrow escape for Lorraine’s favourite sheep.

Yesterday afternoon I had what I call a work walk. I promised Denmark that I would send a series of pictures on what we were doing over the last few months. At 4 o’clock I got a bit of time and as the sun was splitting the Skye, the light was good I started my walk at the pier where we had put on some new decking, painted the railings at the pier, fitted new safety rails, concreted the path and then the painting.

I think the camera got tired of all the work as the battery ran out just after the shot of the fank fencing. Lots of painting but I’m not so sure we’ll get any done this week coming…….