The phone has stopped (Sunday 10th May) so I’ll continue with the update. Now its Monday!!! The phone had started ringing again yesterday.

Been a tough winter on the West Coast for the animals, we are still feeding sheep and nearly into our 6th month. The wind is out of the North and will be all week, so growth will be slow. With 19 lambs and ewes on the ground, not to mention the rest of the sheep and deer the grass coming is quickly gobbled up. We need a little warmth.

We put out a bird table this year but the sheep got to it. (Previously posted). 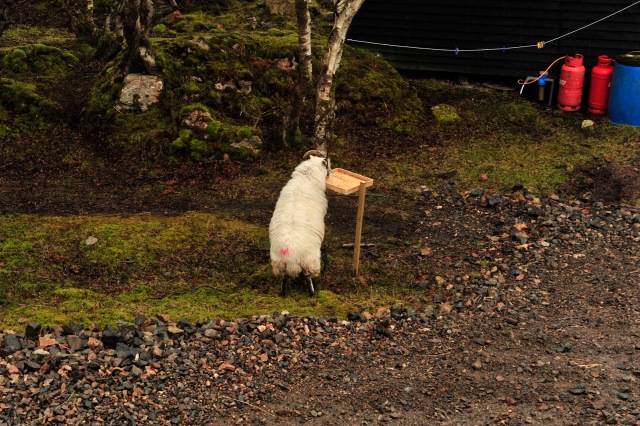 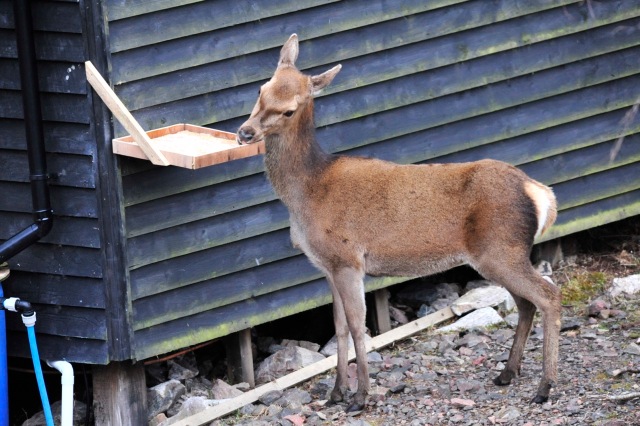 So we moved it but the deer got to it. 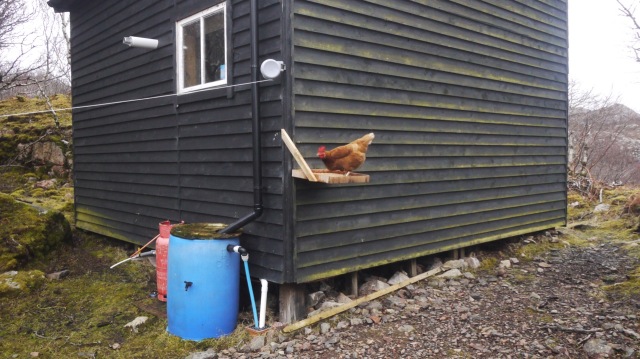 Once the hens found it we had to raise it once again. Just the chaffies and Robins now that are fighting over the grain. But it is at head height and not to handy if you walk into it!!!! 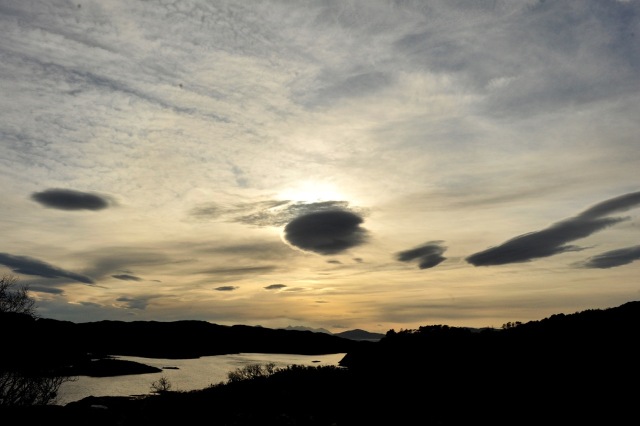 Back to the views, ever changing and keeping the cameras on their toes. The view from the house ‘Tigh na Creag’ just keeps changing all the time. The view to-day (Now yesterday 10th May) on yet another clear spring day but bitterly cold in the wind. 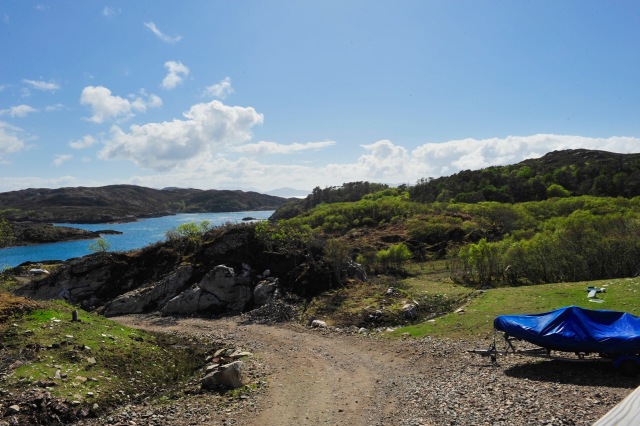 Not many visitors this last while so this one was a surprise when this aircraft carrier rocked up on the Range, could be the Queen Elizabeth? Looks like it on sea trials, that was back in February. 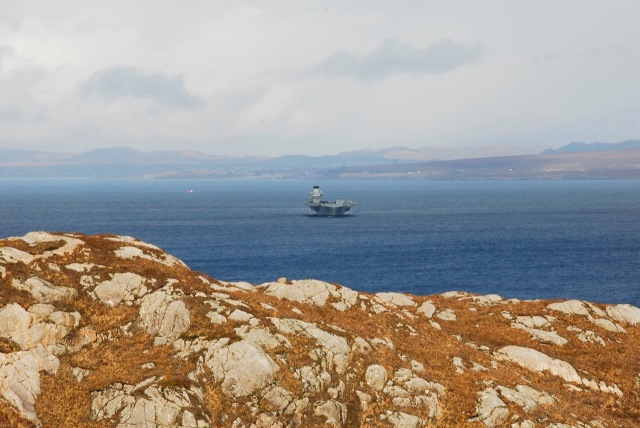 The work continued with better weather, early on there were signs we were going to be rid of the rain and after years of looking at a half done fence project, we set to and quickly finished it. Trees were the next problem with Scots Pine in short supply. Oh how that changed when lockdown started. I struggled to get 200 SP but managed to get some cell grown from ALBA trees. Good looking trees but they’ll struggle on Rona, they are pretty much sheltered here so fingers crossed. 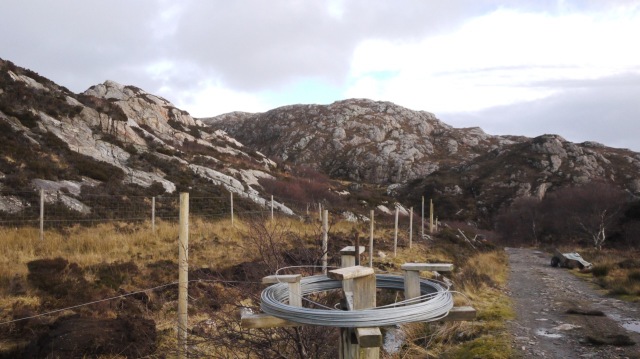 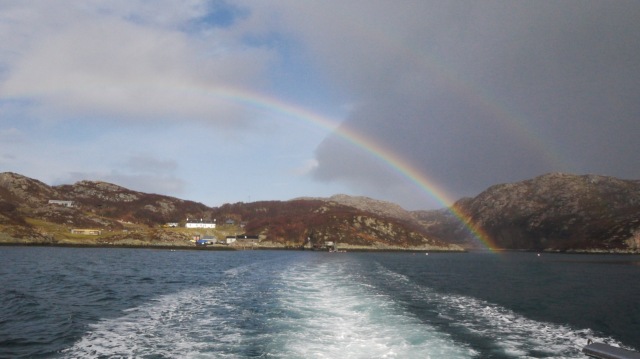 A trip away to Newcastle in March to look at a new boat was interrupted by a visit to the Portree dentist. A pretty gruesome extraction was then followed by a 5 hour drive to Newcastle, not pleasant. But I would not have been fit for anything else but sitting down that two days. Needless to say the boat I saw was not for us. 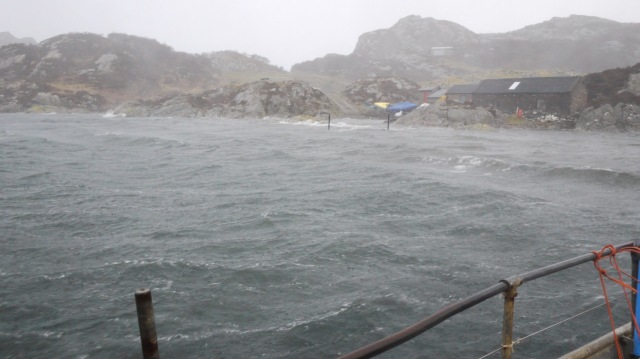 Back to Rona and we had a visit from Calum to connect up a second hot water tank. One had leaked in Seascape and as we bought the two together for each cottage 18 years ago it had to be worth a check. As suspected the tank was leaking. 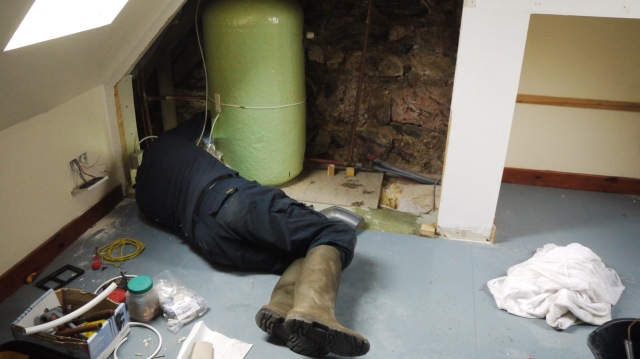 With Calum here and the season just about on us we had to put the Mooring tackle back in the water, no sense in it wearing away overwinter so we store it ashore. It was a very poor day when I went to the boat, which was ashore to check if I could get it in on the tide. It was an exceptionally high tide that morning, I found the waves were breaking over the stern of the boat and swamping the engines. I had to act fast, I could not pull it forward with the JCB but with the high tide I could easily push it into the water but just as I did this the storm really got going. The next half hour was interesting to say the least!!!! Suffice to say Callum arrived at the pontoon just in time to take my ropes. An hour later it was calm enough to put in the moorings, funny weather. 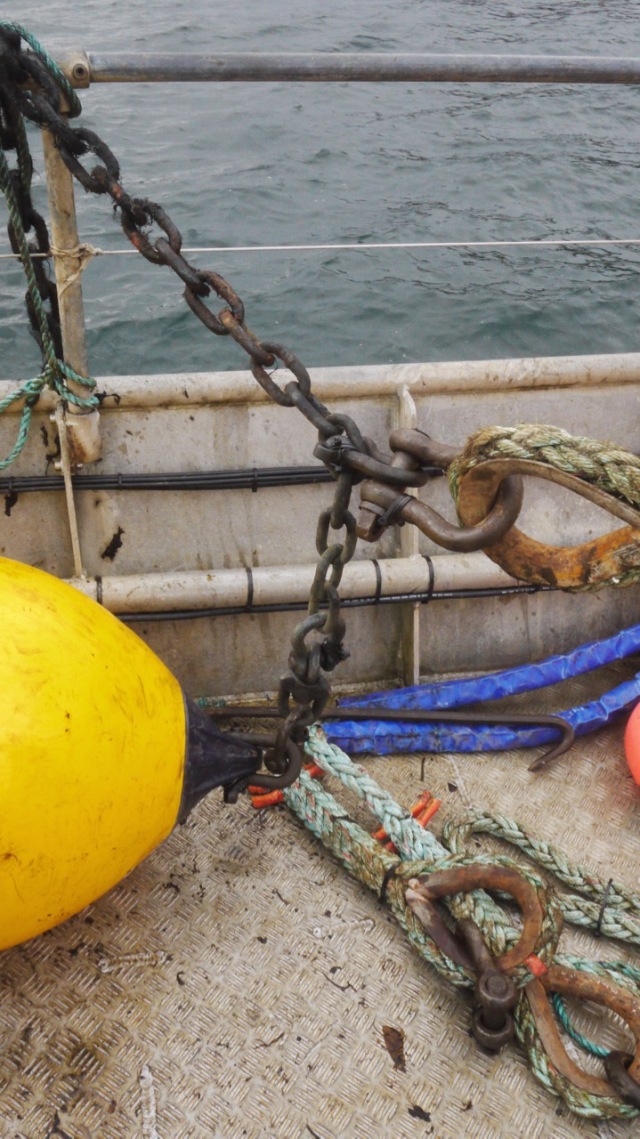 If the season ever starts, we have 4 moorings and they are all as new, installed last year with substantial chain, shackles and strops. All supplied by Gael Force of Inverness. 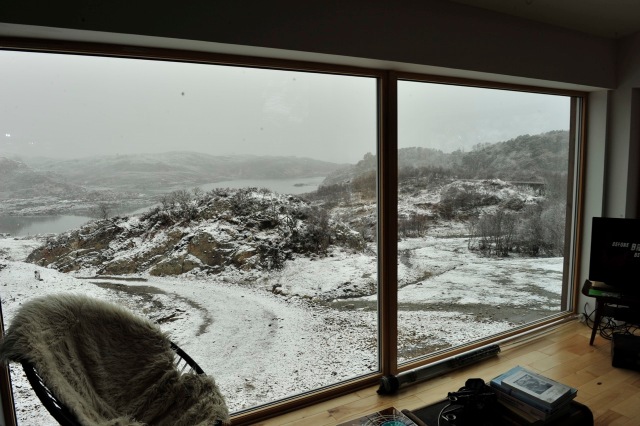 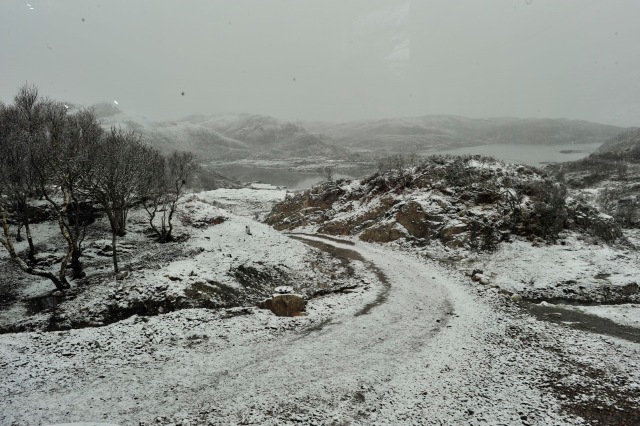 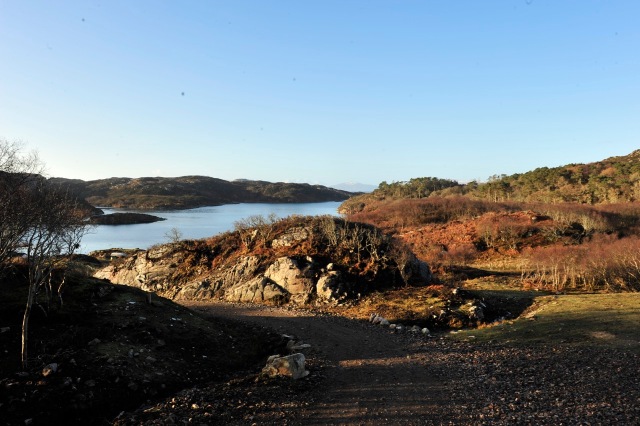 A good time to plant the trees, a wee bit of fertiliser and we can leave them to their own devices save a bit of weeding soon. The acre plot is an area that has quite a bit of bracken which will shade out the trees. I had hoped to create one of these plots every second year when we did the first ten years or more ago. But other projects have taken over and we have only achieved two to date. We have lots of Birch but not a lot of Scots Pine and it is an effort to create a seed source, which I’ll not see for sure. 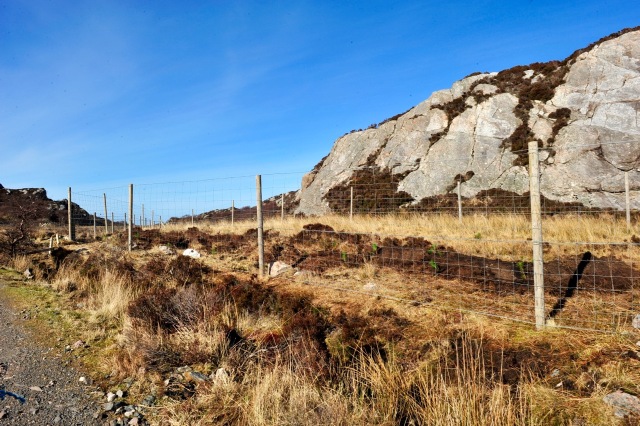 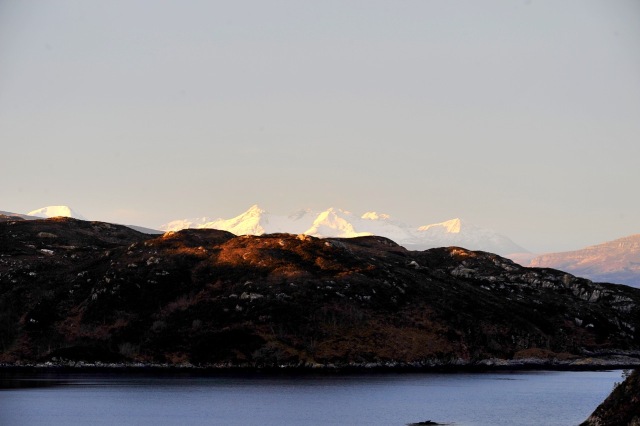 When I was zooming in the Sea Eagle flew into the picture and landed right in the middle of the frame. (that’s the wee dot!!!) 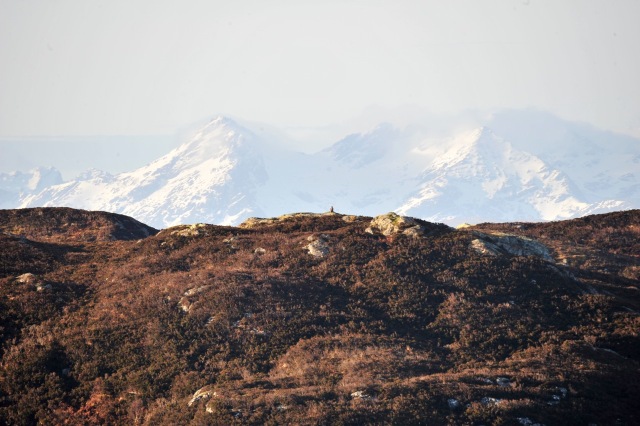 Then The Sea Eagle Arrived

We had the boat in the water for the moorings but it had not been antifouled, we paint it every year but last year there was a problem with the hull, a few pits, turned into many and we had a problem with a leaking hull. The only answer at this stage was to fill it with Marine Filler and give it several coats of paint, one primer the rest antifoul. It works. 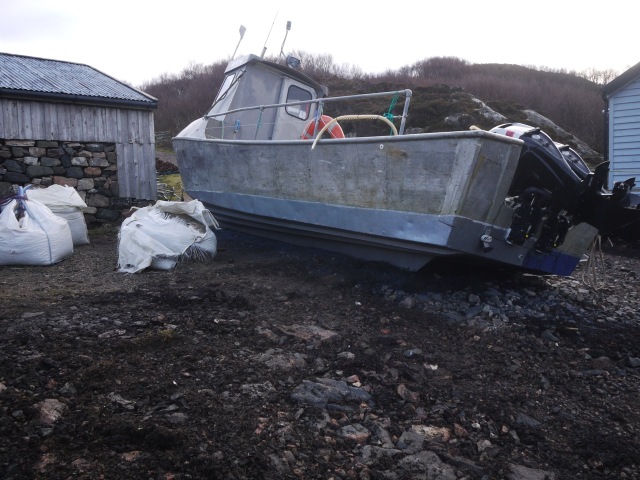 In fact the boat is going really well having been back and fore to Portree quite a few times lately. 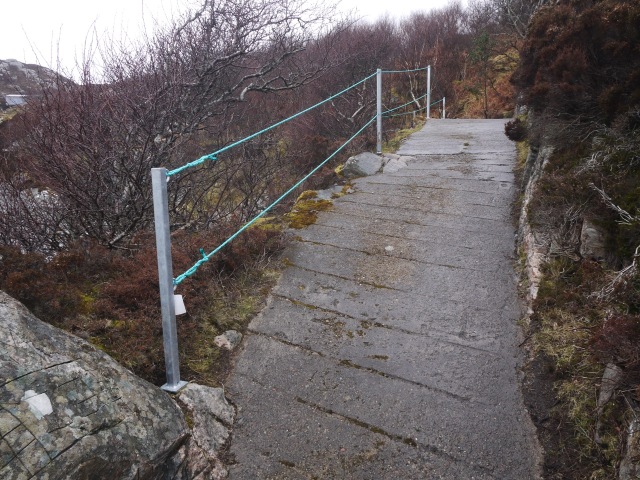 Even by the time we got to putting the new railings up it was Lockdown, we carried on. We have been trying to make the path from the pier visitor friendly with new concrete on the base. The drop is not much on the railing side but the landing is full of boulders. So a new fence was needed. Not the first, many years ago there was a metal posted, wired fence there. Probably way back in the ‘Woods’ ownership days. 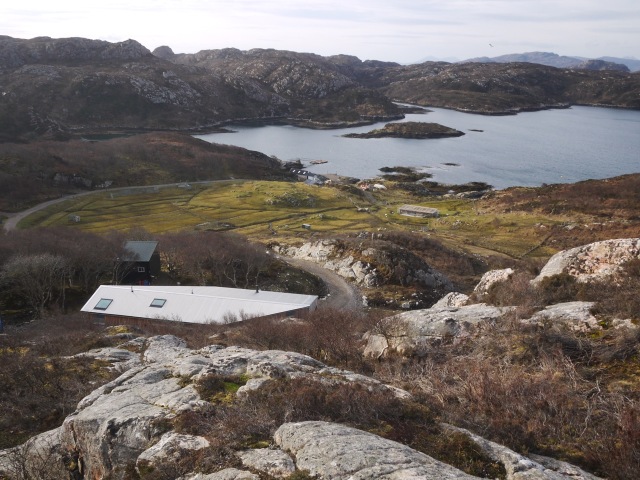 The View Whilst Looking for Lambs, Early Morning.

At this time of year I hope to get reasonably fit. Every morning at 5.30ish I wake and leave the house shortly after looking for lambs, or problems, usually an hours walk. The best bit apart from the arrival of lambs is the walk in the cool morning light with the birds waking up, the cuckoo calling, the sea breaking and the view. Very strange this year with very few planes and boats about. So Quiet. 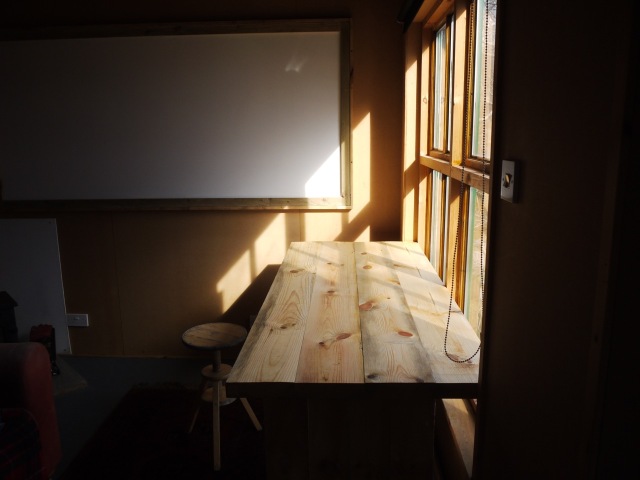 The diversification of jobs is wide, Lorraine has taken over the cabin as her ‘studio’. A room for sewing, which was very timely with a call for scrubs. So she set to find material which we had plenty of from the old cottage linen and I had to make a work bench. We had plenty planks left from the build so 4 @ 8 x 2 were found and planed down, joined together, hey presto, a bench. 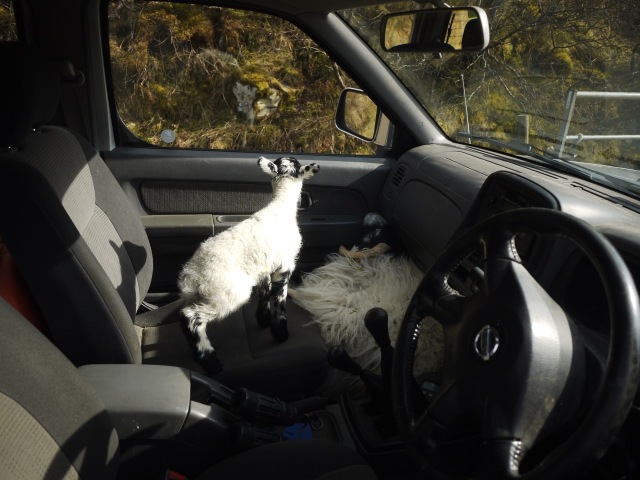 Not on a walk but on a visit to Dry Harbour, I spotted one of our escapee Gimmers with a new lamb. Easily walked into the garden at Seascape rather than the usual rodeo when we find them. I had the pick up but rather that lose them again I bundled the ewe and her lamb into the jeep, I’m sure they enjoyed the ride. 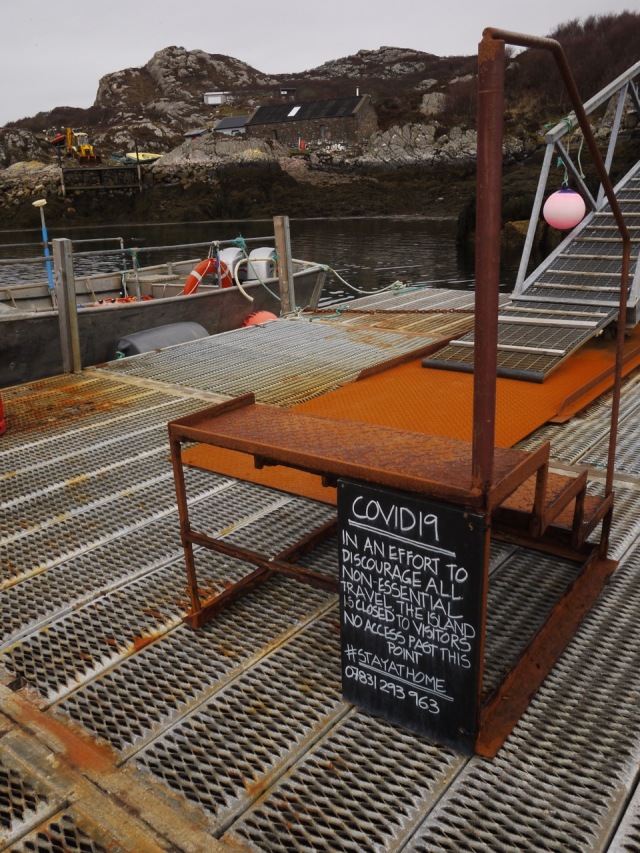 The picture above says it all and the visit from the SAR helicopter too around the time we put it up. We have had a visiting yacht in April which was disappointing and it is those that break the lockdown that put lives at risk. If and when those that choose to ‘do what they want’ have a problem they then become a danger not to themselves but to those that have to attend to them. I read this morning of hillwalkers who drove to Glenshiel for a hillwalking day only to have their car breakdown which then entails the driver of the breakdown having to deal with them. 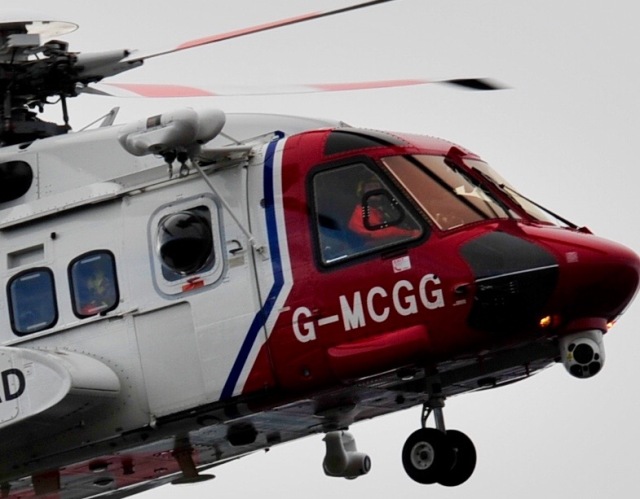 Our Only Visitors Last Month.

It was disappointing way back on the 14th January to find this after a horrendous gale and noisy night. 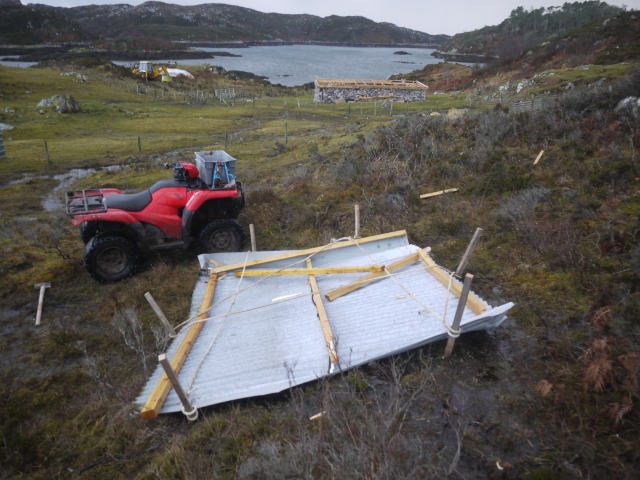 Even more frustrating to have to do it all again. 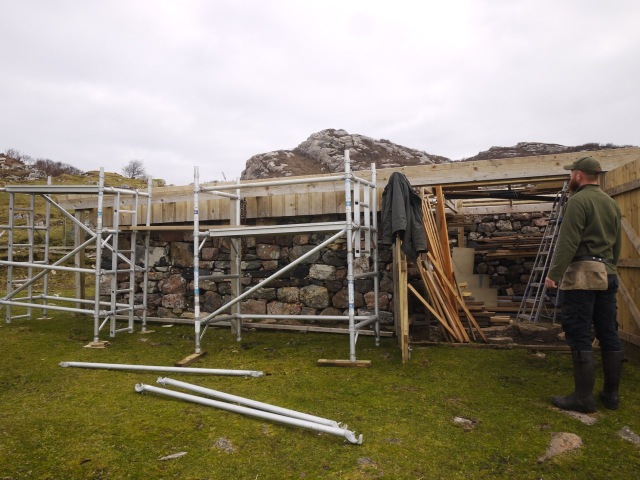 But we managed to re-use almost 90% of the tin and quite a bit of the timber but we do have a lot of kindling. 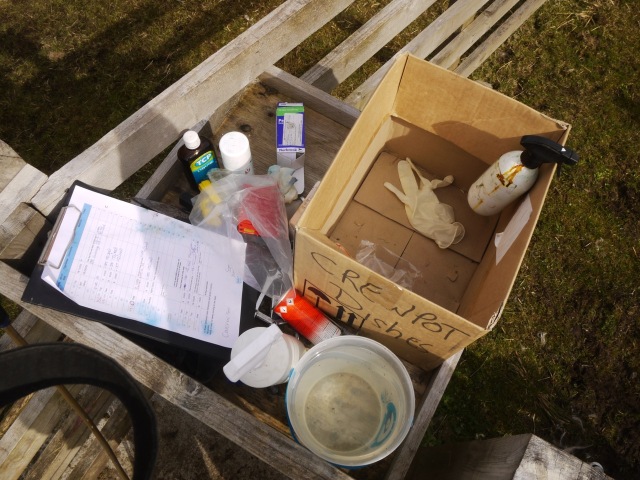 In between it the sheep need dealt with, drenching, tagging, tailing. A short diversion and back to the roof. 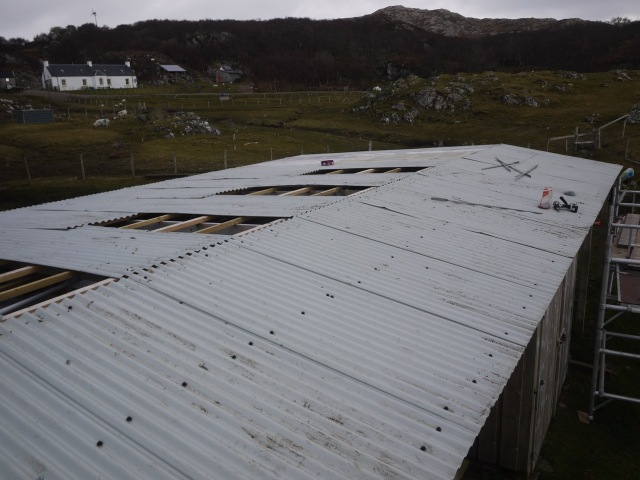 Not pretty but needs must.

I heard that Jewsons Broadford were open for account holders a couple of weeks ago to pick up at their front door, it was swamped as nowhere on Skye had been open for building material. But we managed to get some things picked up and in that was the corrugated perspex sheeting which enabled us to finish the roof. Now all I needed was the gutter fittings. 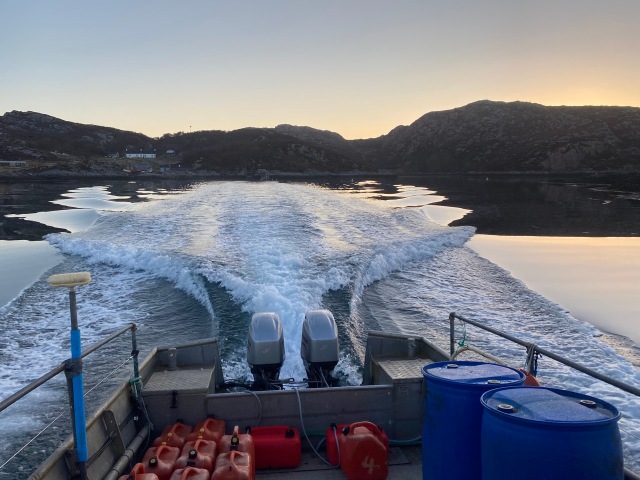 The Lockdown has its advantages I suppose, the price of kerosene is very low in comparison to normal times. So to take advantage and save hundreds on the landing craft that usually takes it, we hope to get a few loads from the Scottish Fuels Portree. The weather has been kind and it is quite a surreal feeling to visit Portree under present conditions. More later.

It is half past eight Monday morning11th of May. I’ve been out checking the sheep and lambs but must now head out again it is a beautiful day, lots to do so more updates later to-day.