Down to the Gap

Great to be back on the water to-day, my day off!! Putting out a few creels and having a shake down cruise. It was a lovely morning for it. Glad to report no real problems with the engines which is always the thing that gives me headaches. For once they burst into life and ran well (not smoothly, but you can’t have everything). 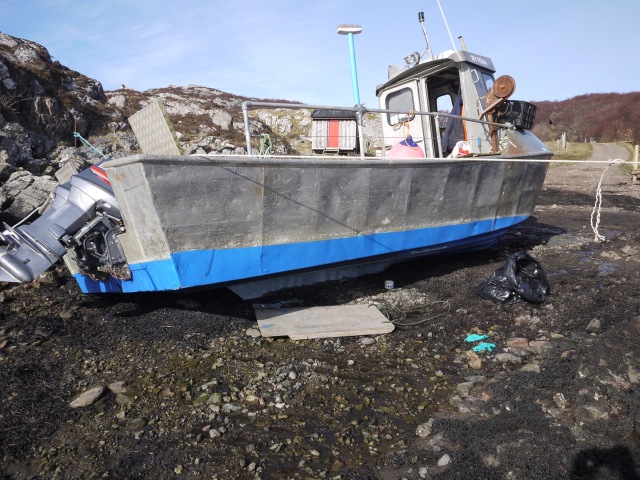 I had just missed the tide on the back of the springs over a week ago but there was plenty to do so no worries having the boat on the beach for a week and of course the weather was good.

Smoke on the Water

With the tin of spray for keeping the rust/damp out of the engine to burn off first there is a lot of smoke. But once it cleared it seemed to have worked this winter.

I got down to the gap and had a look out to the Inner Sound, no fishing boats just a BUTEC boat patrolling the range, the Sub’ that I had heard was in the area must have been below water. Back to the Rona shore and I saw several stags lying down on the high cliffs, young beasts but all in good shape. They’ll cast their antlers soon.

Back along the Raasay shore by Eilean Tighe and here was a sheep stuck on the cliffs, I know it all too well with our own doing the same thing looking for a bite of grass. I tried to lasso it into the boat but despite several attempts the rope failed to catch onto it. I’ll contact the shepherd but……. 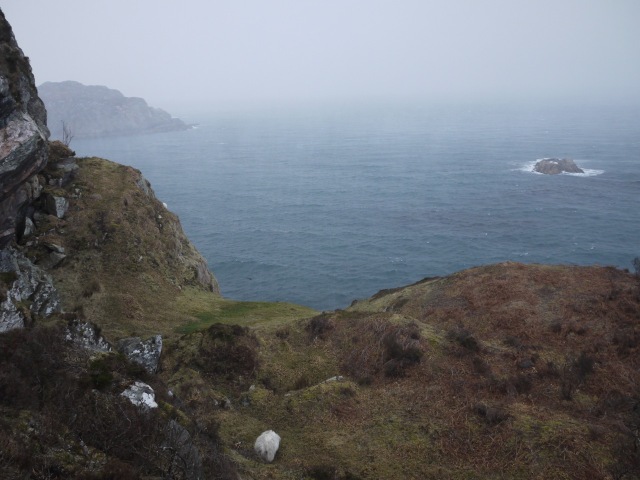 Our Own Cliff Dwelling Sheep

I was round the cliffs on Rona a couple of weeks past and found these two hiding out on the most slippery of slopes, but they have survived here for quite a while despite trying to entice them out.

It Had To Be a Poor Day

It has been pretty full on as usual these last couple of weeks, what with lambs and building preparations, plus the day to day stuff. We did manage a couple of trips to Portree though for Doctors appointments and shopping. Dan took out our new Solar array equipment which should help to reduce the generator running. Fuel is always an issue trying to keep it above empty juggling with landing crafts as the ferry boats are not too handy for big loads. 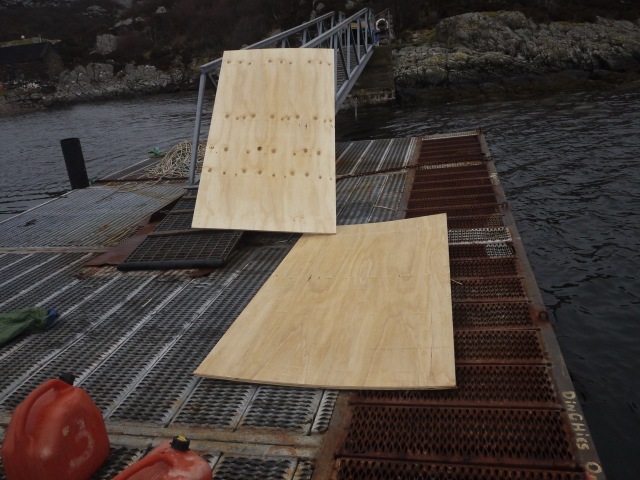 Even getting this lot plus batteries, new inverter and controllers up to the stores took most of the morning after delivery.

Hop, Skip and Hopefully not Jump

I must have shifted a huge tonnage of ‘stuff’ off of the pontoon on my 15 years here.

That few days were pretty damp with a warm foggy/misty drizzle but there have been more sunny days lately with a good feel of spring in the air, my hay fever will attest to that.

Every morning you get your early dose of pollen when I walk round the sheep, doing the head count and looking for problems. The lambs were outside the fence so that their mothers could get a bite of grass the field is pretty bare, just for a few days. I lost two of them but found them hiding in the shed below the log splitter, good to be out of the cool wind.

So when I’m working on the digger I had to keep one eye on the wee lambs who were very inquisitive around the wheels of the JCB when coming in and out of the shed for a feed. 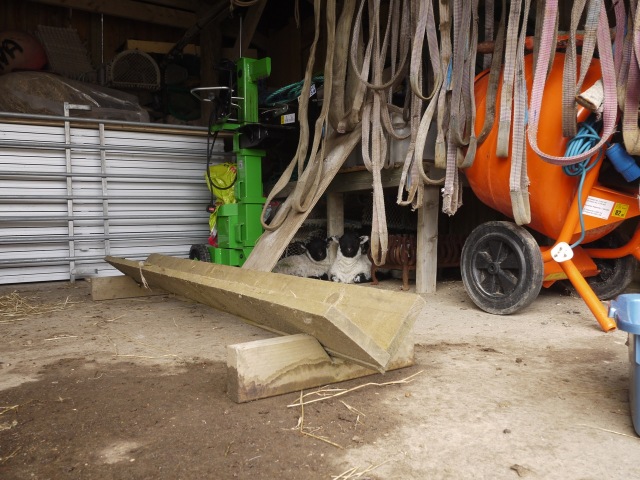 But they must have liked their new hiding place as they were camped out there all day.

Jumping From Job to Job

I got the wet mud away from the track at the shore and quickly moved onto the Solar Array stand. We have been trying too find a cost effective way of mounting the panels and have gone for timber. I had an exploratory drill to see how difficult the rock would be there to drill. I was surprised just how soft it was which is a good thing as some of the rock here is pretty hard. 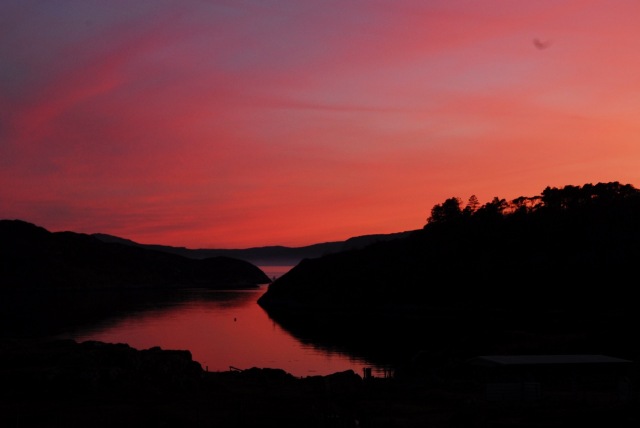 We’ve had a few nice sunsets and sunrises this past while and not to early or late to be about to see them, good to see red at night of course.

The good days continued and it is so good to get a winter then spring like we have had. We have had too many wet winters these past few years, although the ground is wet and will take a long time to dry out. 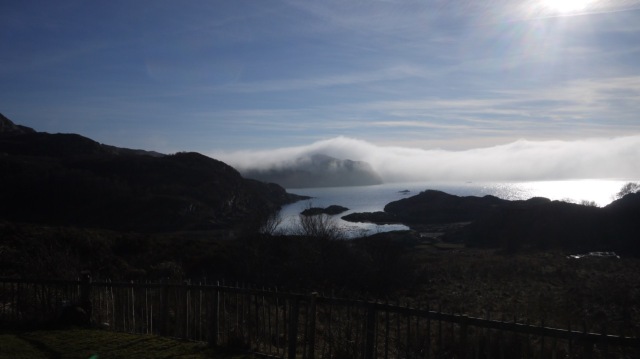 The Fog Is Never Far Away

Blue sky days are great but we just know that after three in a row the fog will appear and rolling in from the Minch we had a day of fog banks coming over then glorious sunshine, cold then hot. It is strange to see the effect of the fog on the views around Rona, we never seem to capture that with our pictures. But it is spectacular to see if you can get onto higher ground. 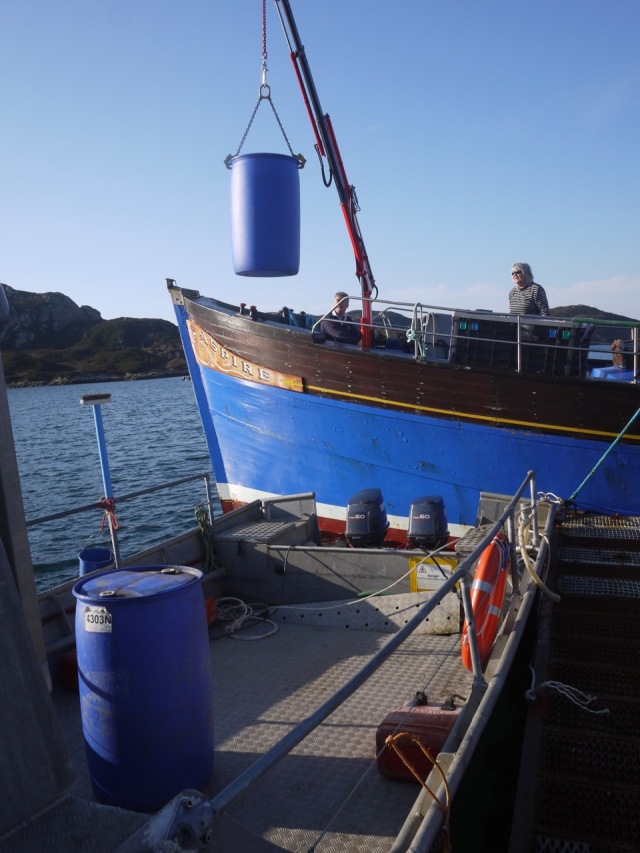 Fortunately the fog did not hang about and the next day MV aspire arrived to take us for more Doctor’s appointments and a meeting with the architect, a lovely day for a trip to Portree which made it all the more enjoyable.

The Rest of The Day Unloading

No rest for the wicked, next day I spent most of it shifting the cargo delivered the previous day (again). By the time I emptied the boat and took kerosene to Dry Harbour the day was almost done but I did get a chance to mount the gas water heater in the cabin. These ‘Morco’ heaters are the business the one in the bunkhouse has been great.

Next day was pretty damp so I carried on with the heater and got it up and running making it easier to wash up and of course a necessity for the building project up there.

It is that time of year when all the Spring jobs come at once. One minute it is looking after sheep, the next dealing with bookings, servicing, fixing and the list of general maintenance goes on and on. The boat sitting out of the water for 6 months attracts rust and there is no surprise when things break once it is back on the water. This time it was the sea cock. I have already repaired it many years ago and am running out of options but hopefully it will do us for a while until I can source another.

After a busy week on Rona and with family visiting it was a grey Friday we awoke too, the pattern just now seems to be quite a few sunny spring like days but instead of driving wind we are getting slow moving rain coming over and often a thick, foggy drizzle. Not pleasant but it just means we don’t feel too bad working inside. I tidied up the cabin that I had been installing the heater and sorted it out so that we could grab a film on the big screen. Good to see ‘Into The Wild’ again but this time on the bigger screen which made it a completely different film. 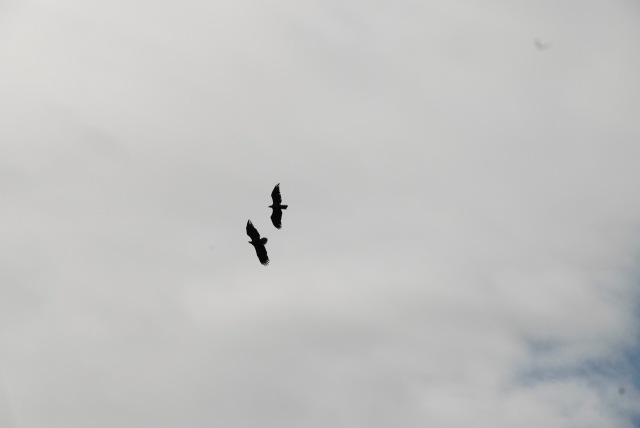 This morning (Sunday)we had a worrying display by a couple of Sea Eagles swooping down near our lambs, the seagulls were bombing them but we think they were just playing rather than hunting, the new born lambs would be easy meat for them.

I’ve lost a few photos but kind of think I know where they are, they prompt me for the blog posts and if I don’t see them I can’t remember……………old age I guess!! It seemed a light week once I re-read the blog post.

Had our first couple of enquiries for the mooring and short stays but we put both off, not that we are being anti social, would I do that? The forecast for the week ahead is poor, mainly wind and in both cases we advised that the mooring would not be available as I’m waiting for chain to replace the worn part. Now at 4pm in the afternoon no sign of anyone so I guess they took our advice.