Frank Has been and Gone.

Frank Has Left The Building.

Here we are after a horrible day on Rona (weatherwise). Even although it calmed right down this afternoon, it still poured rain but at least the wind dropped. It was flat calm by 3pm but until the sunset it had been barely light all day.

Then it got Brighter

It was a lovely end to to-day and we were glad that we were outside when it came, L sorting out the very wet hens and I was having a tidy up after Monday night’s flood.

Christmas Eve the weather had calmed down after a mad windy week, we had a couple of days of calm and relatively dry, no snow. Far from it as the temperature was easily in double figures. Last thing on the 24th I thought I would check our kerosene tank which feeds the central heating boiler. Disaster, it was nearly empty, so there I was 4pm on Christmas Eve filling yet another tank. But just as well otherwise it could have been a different day Christmas Day. 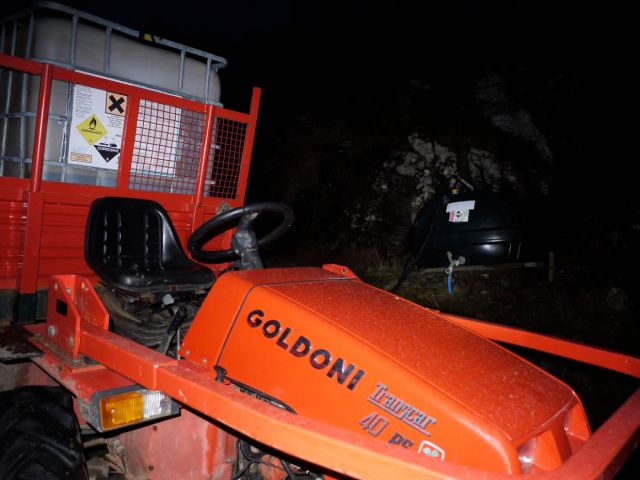 Christmas Day the stock still need fed, in their rush to get fed they nearly knock me over trying to get to their feed, in the melee their trough got flattened. At the same time Julie appeared. She has not been about much so it was good to see her on Christmas Day.

She had her own feed but was trying to muscle in on the sheep.

Julie Trying to Muscle in

It had been very windy all day on the 24th and it had dropped off early Christmas morning, so I took a walk around to see if there was any damage, there had been quite a few big ‘wumffs’ overnight.  The usual suspects were blown about and of course yet again the gangway flap!! I’m getting tired of repairing it.

The oak strap I had fixed on it a week or two ago  had been caught and was now matchwood. Must try again next week.

Back to the house and it was time to open the presents, too much as usual but still very exciting, even at our age!!!!!!! After a wee glass of fizz we decided to head up to the cabin. We put the fire going and enjoyed a seat outside (and another wee glass of Fizz……..). We put the Queen on then watched the Christmas telly for a while. We had a bit of a sunset on one of the calmest few hours for weeks, it was quite a surreal day. 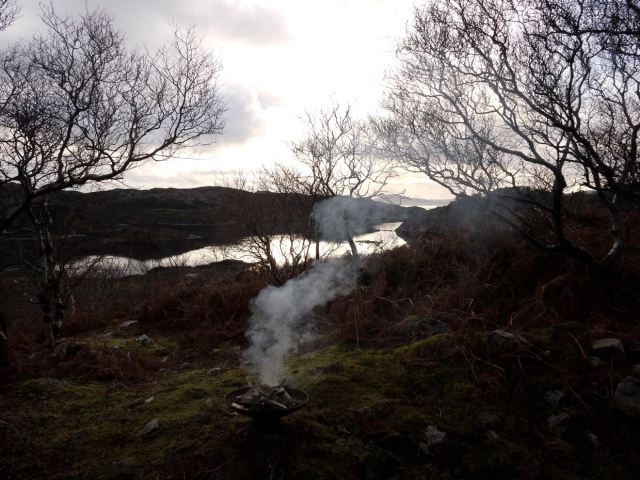 Up To The Cabin

All too soon we had to head back for the turkey, we ate and drank too much as you do, so a plan was hatched to walk to the Applnet mast in the morning after I checked the traps at Dry Harbour.

Getting Into The Spirit of Christmas

Sean the Applenet engineer had been emailing to say that the Raasay mast had been down and some of the rawl bolts had failed on it, so it was a good excuse to work off the previous days excess and check them out.

On our way back to the house we spotted a lame sheep, we could have done without it but needs must. So we caught it and found it was riddled with ticks on its forelegs, it was one of the Valtos ewes we had bought in late Autumn. I had not dosed them when they came as they were pretty clean of ticks then so I guessed they had been treated. But obviously the chemical had worn off so we decided to do all of the Valtos ewes.

That was Boxing Day, it was good to get into the house and get the feet up after that.

Next day it was back to normal over to DH to check the traps. On the way over in the morning it was a clear day with a view right to the North of Scotland, the Torridon Hills had a fair covering of snow.

Snow on The Hills

It was a nice morning and so good to see the sun for a little while.

I got a surprise when I was in the forest when three of this years lambs appeared, seems they have found a way out of our new fence. We must get them back but they are quite flighty. A job for a good day.

We were supposed to get a ferry on Monday but the guests had had a problem with flooding at their home that had  held them up for a day which was just as well as the forecast for Monday was dire. As it turned out it was not a bad day but then mid afternoon the rain started.

Monday night we did not sleep much, what with the torrential rain and the rumble of the road coming down behind the house, it was not a surprise to see the drains all blocked on Tuesday morning.

Sadly it is becoming an annual event such is the climate we are enjoying but compared to some areas we are very comfortable. We had planned to put in new pipes and traps this year but that job is now back on the list for 2016. 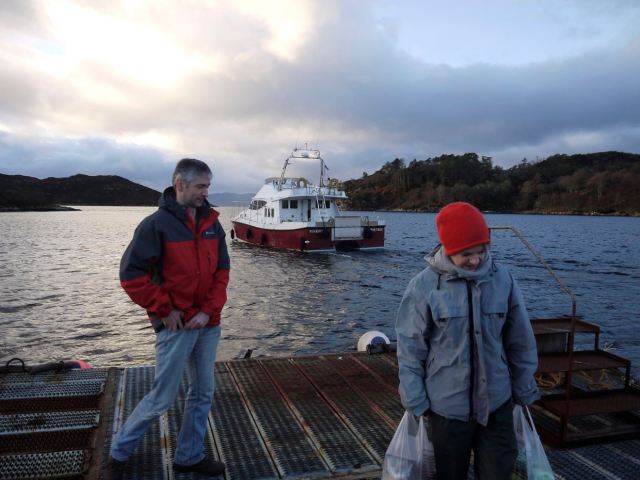 Chris and Lucy Arrive with The Christmas Mail

Our visitors arrived on the MV Stardust around 10am with Christmas Mail, the second half. Once we got the guests into their cottage we had a couple of hours with the mail and then onto the road and drains.

The silt trap had finally filled up and it was my own fault, I could have emptied it, but I was afraid that the concrete frame was going to crack or move if I tried to lift the grid. I was waiting for a better day…………When I did try it did just that!! Oh well, I’ll need to work that one out later.

The road is looking a bit better now. Hopefully we will get an hour or two tomorrow to sort it all out.

1 Response to Frank Has been and Gone.