Happy New year To You All.

Bringing in the Bells With The Northern Lights.

We had our usual trip up to the brow of the hill last night to take in the New year, it was a cold windy night with a shower of rain of course. But the best bit was when we drove up behind the house (we were too tired to walk and the new Scandinavian kilt was a bit light for the wind!!!!!!) we saw a glow to the North and Lorraine asked would that be Northern Lights?

We got to the top of the hill, out of the car and there they were a fantastic display for most of the time we were there. Shafts of green light pulsing above our heads, the moon got up in the East, on its back and with a faint orange glow, it was all quite surreal. Lorraine grinned from ear to ear. It was a great way to say cheerio to the old Year and Hello to the New.

The ‘Black’ Kilt stood up to the wind, more later! 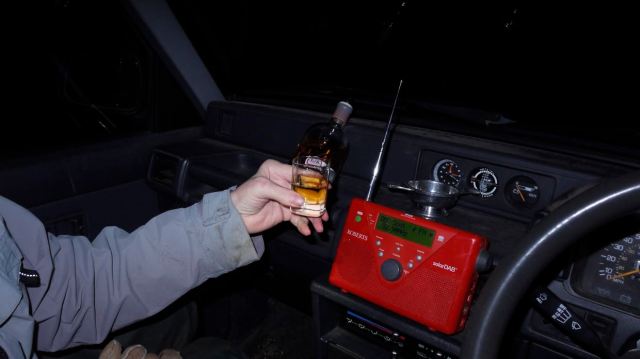 We ‘invited’ Chris and Lucy our visitors in the cottages but they probably thought we were mad, although Lucy is full of the cold. So we were on our own, just the radio and a bottle for company. We hope they saw the green glow from their cottage but like ours they are up against a backdrop from the North, we will hear to-day.

We have Northern Lights here like everywhere else but I have been reluctant to go for a walk at mid night after a day’s work. Also in a previous life during the late 70’s and early 80’s I drove a truck during the night to Skye, so I have been thoroughly spoiled with Northern Lights, from Achnasheen to Lochcarron I seem to remember was best. But Lorraine has had a Northern Lights drought and has been pestering me  to get out when we have seen signs but I’ve always managed to get out of it. I’m afraid not any more and I’m sure we will be making the trek up there often over the next few weeks. The grin on her face once the display got going was well worth the trip.

Sadly we are not allowed to let off our old flares even after asking Stornoway Coastgaurd but we don’t want the helicopter to come out at 12 on Hogmany, fair do’s!! But a few handhelds are ok. In the old days we used to shoot the old year out with the shotgun but with drink involved it is probably best to leave it in the cupboard………………..

So we had a few flares and then set off home very happy with our start to the year.

Lorraine was dealing with it and I think she said it was an American organisation.

We hope all our readers and followers have a Happy New Year,

From Bill and Lorraine

1 Response to Happy New year To You All.