We are getting a landing craft on Saturday if everything falls into place. On it is a new JCB for Rona, the old one is not past it ‘yet’, but this new one came up and we felt it was a good buy so we went for it. We then put the our JCB on ‘Gumtree’ last Friday and the phone/emails enquiries have never stopped, wish I had ten of these things to sell. Seems they are like hens teeth as the saying goes.

Last month we got the new motorbike so one of our old faithfuls has to go to. It will be on the landing craft on Saturday heading to Skye.

The weather last week meant a lot of inside days but with plenty projects to catch up on the week was far from wasted. When the rain did stop the midgies came out and it was pretty bad. I would not like to be camping around here just now!! What I did have to do was deal with an overflowing septic tank. Last post I thought I had cleared it but no. 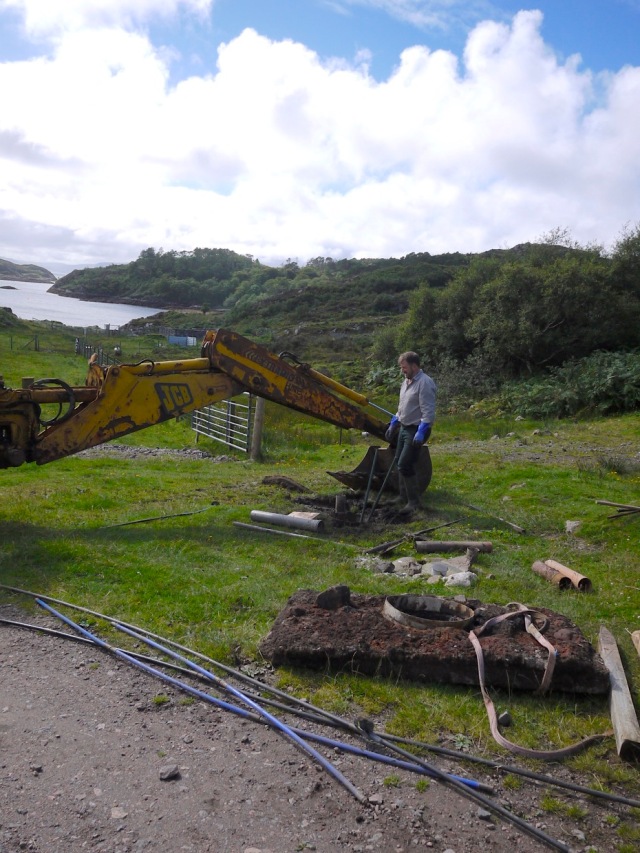 After much dodging between the showers and roding, poking and swearing, there was nothing for it but to open it up. With Hugh on the end of the phone I got my head round what was happening and started digging around. Finally after having to lift the manhole, concrete and pipes out (because I could not get into the manhole) I found the blockage and after a bit of serious poking, got the intake clear. All of a sudden we were working again and I had a sigh of relief. It is one of the major worries the septic tank but after 20 years of use it just keeps working despite the odd blockage. Now to put it all back together.

Like most jobs we had to wait until Saturday to get bits and pieces to finish it off. So the job stopped on Friday. That afternoon we had Robin and Heather visit us on their yacht Rowan IV. Rowan IV was built in 1938 by Mcgruer’s of Clynder, on the Clyde. Well known in its previous life when it belonged to Robin’s great uncle, Dr Robert Carslaw, who wrotes the book ‘Leaves From The Rowan’s Log’. Nice to see a classic yacht, carefully restored on the mooring. We had a lovely evening and walked them down to the pontoon, just in time to see Yacht Tramontaine trying to anchor.

The wind was gusting 25 knots plus and they were having all sorts of problems but just as it got dark over an hour after they came in they managed with the help of an extra anchor.

You would think with plenty room in the anchorage they would have been able to set the anchor but the yacht was getting the full force of the NW wind and was a bit of a handful. Saturday we had the changeover and the weather had promised sunshine but we woke to grey skies. Kevin mentioned some fishing gear at the mouth of the harbour and was concerned that a yacht/boat arriving late might not have seen it as it was in the middle of the channel. So mid afternoon I went out and pulled it round the corner,half way there the alarms went off in the boat, the starboard engine had been giving trouble and I could not find the problem, here it was back again.

By night it had calmed down and it was a lovely evening, the forecast was for calm sunny Sunday but again it was grey and misty. I went out for a look for deer first thing but beat a hasty retreat after the midgies started to get on my nerves, the prospect of dealing with a dead deer in flat calm weather did not appeal.

It was a bit of a funny day Sunday dealing with the many calls about the digger, also trying to sort out the 60,000 images on the various computers and hard drive. iPhoto drives me mad. But we are nearly there!!!!! By the afternoon the sun was out and at last a late summers day.

Monday was a beautiful day, Yacht Escapade was on its way and we were keen to get up to date before they arrived. We had an invite to dinner, Yogi’s lobsters for tea!! First of all we were trying to get the old beds upstairs in the holiday cottages but the hatches proved to be too small. It was worth trying just for the view. Back to Big Harbour and Kenny was in on MV Seaflower, he gave me a hand with the engine alarm and we were all set to change bits over from the other engine when the alarm stopped. A wee rustle of the wiring and it came back. A bit of pushing and pulling later and the alarm had stopped completely, seems we have a loose wire.

I got the septic tank started off with a bit of concrete late on then it was Kayak Monday with three lots of kayaks passing through. The last couple were obviously strangers and we could see that they were looking for a camping place. Where they went was probably the worst place on Rona for midgies, so I took off on the boat and showed them where would be better. It was so calm that the forest edge where they had been planning would have been a nightmare.

Last night I seem to remember promising Nick from Yacht Escapade a half days stalking so I had better go and get ready for that, good to see the breeze getting up.