Could Do With A Holiday.

It was a hectic week last week trying to get everything done prior to our Inverness visit to get our hair seen too, we were beginning to look a bit Feral!!! Andre and Kasia had been over to help with the butchering of the young sheep. More used to cutting up deer, we were scratching our heads a bit but it worked out in the end. They later reported the chops were the sweetest they had tasted, just delicious. Which was good to hear on the back of the good price we got at Portree mart on Monday last for our lambs, £40 each. 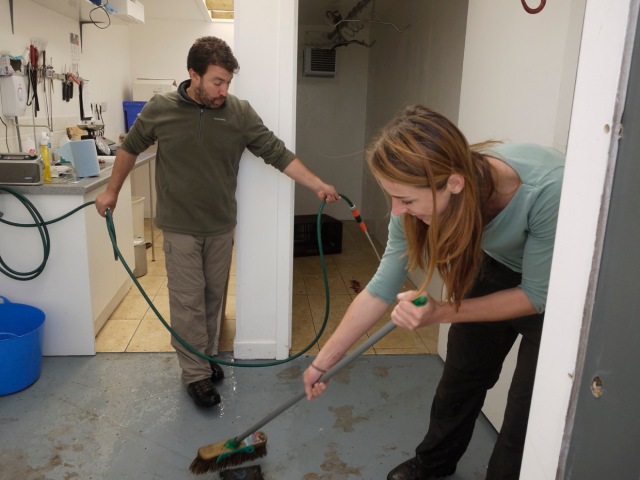 If there is one bottle of wine to buy this year this is it, Andre gave it to Lorraine for her birthday mid August. Fortunately L shared it with me!! Excellent.

Michael and Gail our Findhorn yachting friends had left us on Tuesday last week on a beautiful sunny day, they were heading home. Gail was keen to tell us about her seminar ‘We Do Not Die’ which sounded intriguing, however we are highly unlikely to get to it  in Findhorn, but you never know.

I’ve been visiting The Findhorn Foundation where they have lived for many years and talking to them both keeps us up to date as to what they are up to, sounds like it is a busy place, maybe over the winter we will get a chance to call. Always worth a visit.

We had a ferry with day visitors from Portree and to pick up the climbers who had been in the bunkhouse for a few days on Tuesday Mid day. We should have left on this one but we were pretty busy and L’s tooth was not too bad.

Mark And The Climbers

That night, Lorraine’s  toothache got really bad and we had to get away earlier on Wednesday than expected to get an emergency appointment in Portree. A fantastic dental service that the local NHS clinic run. Before we got going on Wednesday morning the door lock fell apart in the Lodge, just what I needed but nothing unusual with so many things on the go on Rona. 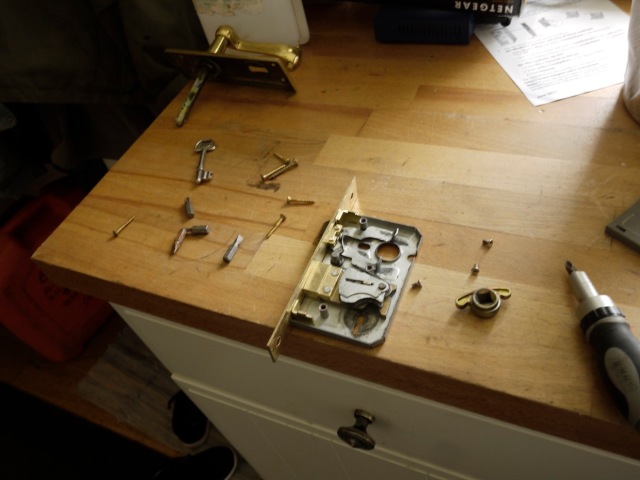 Could have done without that. All too soon MV Aspire was here and we were off.

We  got to Portree in the pouring rain early afternoon, L had a big back tooth pulled after much examination, tooth number two this month. Then onto Strathpeffer, via Inverness delivering 5 boxes of Rona venison to our kayaker visitors Heather and Stuart who were here a couple of weeks ago. 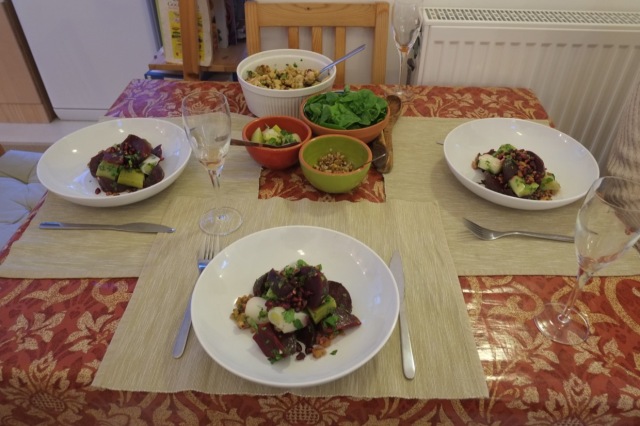 We arrived late at Strathpeffer but Liz my sister had been experimenting with her favourite cookbook at the moment, one of Yotam Ottolenghis, Jerusalem. Steamed leeks, beetroot, pomegranate seeds and spicy walnut salad. Really lovely after a very long day. 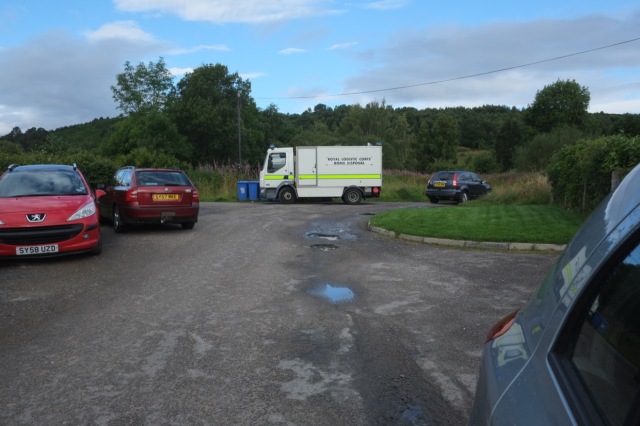 Wonder What They Are Up To.

We got up in the morning to find the bomb squad at the end of the road, never heard what they were up to? After a long day shopping we had a quick visit to see the grandchildren who were on top form despite my attempts to scare them. 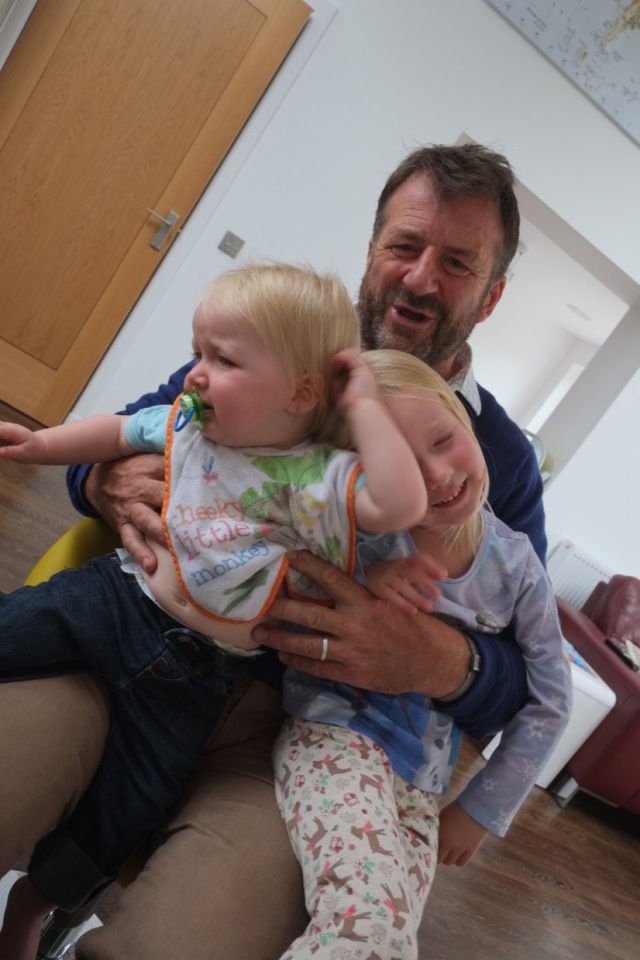 Friday was a quieter day as we were just going as far as Shieldaig. After shopping in Dingwall we headed off, L to Torridon Hotel for afternoon tea, me out on Kenny’s boat with guests. Kenny and Linda’s son Magnus and partner Paula were home for a visit and had some American friends with them. A wee boat trip was planned and we headed out passing the Sea Eagles on Shieldaig Island who were looking well fed.

Magnus could not wait and prepared some shichimi on the way in. 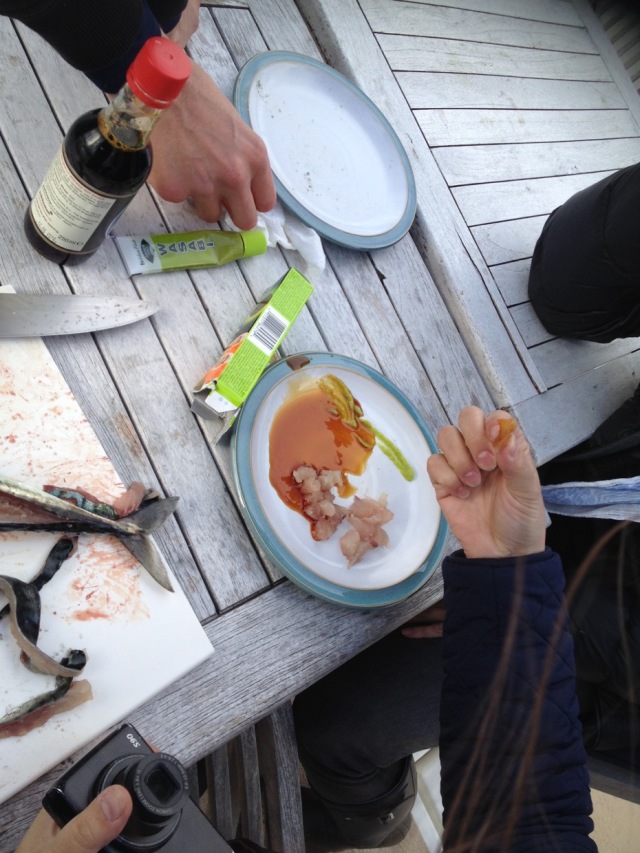 Back to the house, Magnus and the cooks got going with the catch of the day, after a late dinner we got to bed at 1.15am up again at 6.30am then over to Portree to catch the Saturday boat at 8.45am, phew.

Change Over in Reverse

Our guests were almost ready to go, although the weather made for a poor end to their holidays but they were all happy and we think kind of sad to go.

Loaded up and Away

Saturday was a blur, the weather was set to deteriorate so we got sorted out and settled down when late in the day three yachts arrived, quite a surprise to see them with the forecast as it was. There seemed to be far too many people for three yachts, there were loads of them.

After the poor forecast on Saturday the weather on Sunday did not disappoint.

We had a plan, our beds had arrived on the Tuesday boat but we had no bases, I was going to make them. Calum had cut the lengths, so I got them down and started to put them together. Not a bad job when the weather is so bad.

The Beds are on Their Way

Got as far as I could on Sunday and called it a day, flat calm forecast for Monday so I planned a fishing trip out in the Kyle.

The breakdowns started (again) before I got started. One of the boat engines alarms was playing up but as it was flat calm I fished away, took some creels in and headed back with some tasty shellfish. 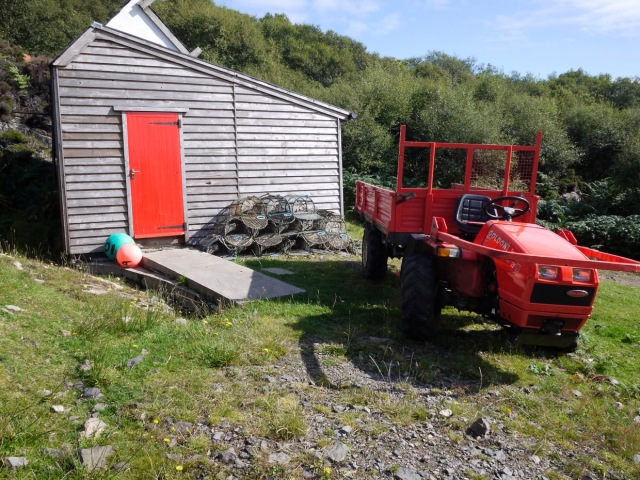 I got the creels onto a hard stand then headed back to the bed bases, which was not so good a job on a sunny afternoon.

Got that finished and went up to see if the bait had defrosted. I thought it was herrings but it turned out to be white fish, wish I had known that before I headed out on Monday morning.

The flies were giving the defrosted fish a hard time so I chopped the slab up and put it in the tub covered ready for salting. 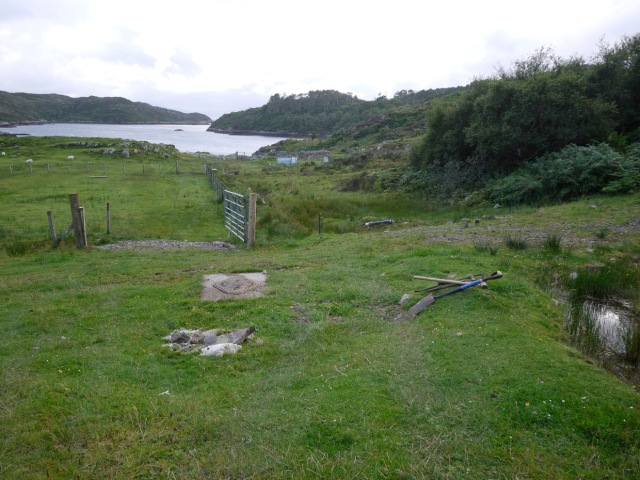 The View From Our Septic Tank.

Lorraine went down to the hens first thing this morning and shortly afterwards I heard a shout, I had been getting ready for a bit of electrical wiring. The septic tank was overflowing, great. So that was this morning sorted out. A really good job just after breakfast, who would be a plumber. But, it is amazing how it works as it has not been emptied for twenty years. A bit of rodding here and there, a pipe off and a look at the connections, here’s fingers crossed that I have cleared the blockage.

When I went to get my morning egg (before the septic tank episode)the trays were empty, turned out the hens had stopped laying but I was suspicious because one of the sheep had closed the henhouse door last week when it broke in to the pen for a feed. So Lorraine went foraging and came back with fifteen eggs and chantrelles, a good haul. Poached eggs for breakfast tomorrow. After the mornings refreshing work I got down to the new beside lights, much scratching of heads and looking for bits later I got them sorted out and working, next thing I have to make a head board, that may be Thursday’s job, we will see.

Let There Be Light

We were really looking forward to our time away, but toothache sort of messed us up a bit, coming back tired but relaxed and then to nothing but dramas since. Although we did miss the water running out at the Lodge last week!!! Tomorrow we have to look into the dampness we found behind the bedroom wall, worrying at the end of the summer, what will it be like in the depths of winter. We hope to get it sorted, but in the meantime we could both do with a long holiday.