That was the plan for Sunday but as they say, the best laid plans…………Saturday night looked so promising, I was up the top of Meal spying Rona and the evening was just fantastic, a single yacht in, the Portree sailing club in the doldrums at Brochel. It was a pretty picture

After seeing the Portree boats out I thought I’d have a sail myself so on Sunday I prepared the Wayfarer and pulled it down to the shore. This was supposed to be a day off but very quickly it all went pear shaped. The centre board stuck and was proving impossible to get it fitted, then I could not find the bungs. Anyway I got there, the wind was good and I fitted the outboard, thought about the safety rope to tie it to the boat but it was only 30 yards to the pontoon. Got the dinghy floating, pointed it to the pontoon got out into deeper water and gave the outboard power, at that the outboard bracket snapped and the new 2.3hp Honda landed in 6ft of water. Disaster! 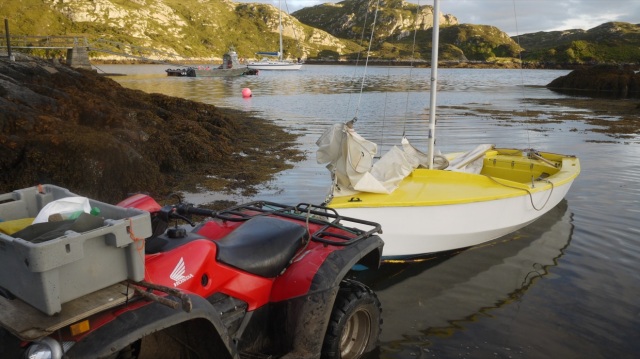 Day Off, I Don’t Think So

I had not intended to swim but at least the water was warm, so back to the drawing board. I threw the engine into fresh water and pulled the Wayfarer ashore. Once I got the boat organised it was up to the garage to strip the outboard and soak everything in oil. Back down to the pontoon and a family on holiday had arrived ‘looking for the cafe’,  all the way from Henley-on-Thames,  we had a chat but they left heading for Portree, better luck on the cafe hunt. 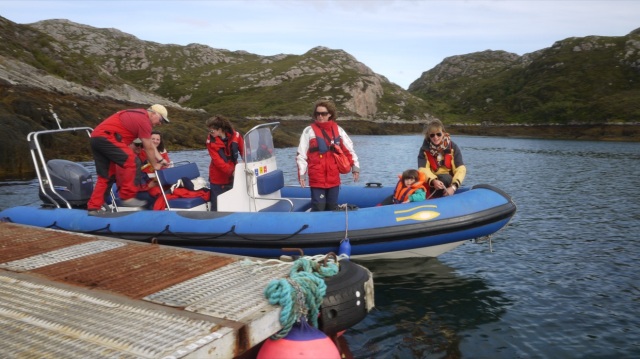 Looking For The Cafe

I did manage a half hour’s sail but that was at 7pm at night and the wind was dropping and the tea was on the table, maybe tomorrow.

Monday,  the morning was spent sorting out the engine but at last I got it running. Then I looked at the forecast and remembered I had put the mower and strimmer to Dry Harbour so it was off to the other side to mow the grass at the cottages. No one in just now so it is an ideal chance to get the gardens in order, by the time I had finished, it was early evening and that was that. Filling out the diary with the days events I saw that I had written venison and at that I realised we still had 20lbs of minced venison in the cooler. So another change of plan, first thing next day was burger making.

We started first thing Tuesday morning and three hours later with several interruptions we had 105 burgers in the freezer. As we were tidying up, Muriel and David Banks, arrived off their yacht Super G. I’ve known them since my very early Rona days and they are regulars to the Island, their daughter is called Rona and David has been around the area since he was a young lad, over 70 years ago he first came with his Father to the Salmon netting around The Sound of Raasay. They know the places where to fish and as usual a box of fish arrived too.

We invited them to tea, burgers of course and we had a very enjoyable evening. A bit tired after all that burgers and filleting fish. Muriel and David were on fine form but tired too so early on we went down to the pontoon with them and they headed back to Super G. It was good to have an early (sober) night.

Not only do we have problems with the small engine, one of the Yamaha 60hp’s on the aluminium boat has packed in, it has started making a noise that doesn’t sound to healthy. But I have creels to lift out for the season so took a chance with the rumbling engine and headed out to Kyle Rona. An hour later 1 fleet lifted and heading back to base I met Super G heading out of the harbour and back to Oban.

The rest of the day was spent catching up, putting the creels ashore, sorting out the engines and at last I had an hours sail in the Wayfarer. But that will be that, the forecast from to-day Thursday is going downhill. 4 yachts in the bay tonight but I guess there will be a clearout tomorrow with gale force winds forecast yet again. It seems like a once a week thing just now but it will pass for sure.

A fortnight ago we were out in the boat with Craig and his family. Possibly one of the best otter moments was captured by Hannah on her Dad’s camera. Just keep pressing the shutter I said. She did just that and here are a few of the pictures. Fully 15/20 minutes we floating about watching the wee fellow and quite nonchalant about our 20 metre distant otter watch. There are certainly a few about.

Muriel and David reported to us that they had Rona Raiders aboard the first night they were in the harbour this week. The box of pollock they caught was under the dinghy at the bow of the boat and at 3 in the morning the otter paid them a visit. When David got up to chase it away it hid with the fish below the dinghy which was upside down. It then hid on the upturned seat and when the dinghy was turned over it disappeared in a flash over the side. 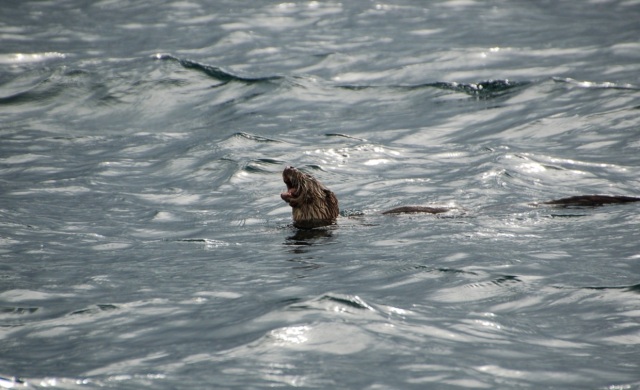 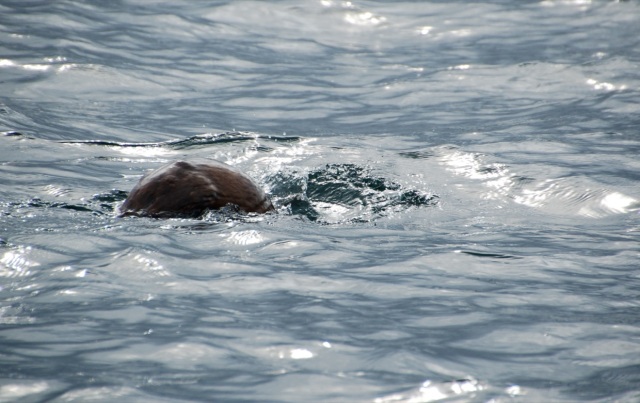 Looking for the Toilet