Been a busy week since our return to Rona from Orkney, that seems an age ago. With our visitors in the Lodge and a full house at Dry Harbour it was always going to be hectic plus yachts in every night, we have been kept on our toes. But it is now early Saturday morning and Dan’s boat ‘MV Stardust ‘ has just been for an early pick up. No one arriving so some sleepy heads headed off for a flat calm sail home. 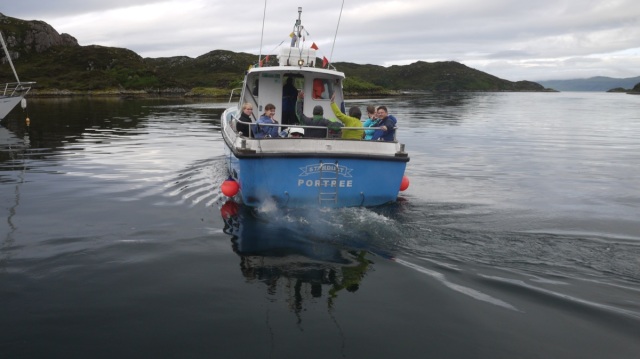 Kevin’s home from his successful visit to Raigmore and we hope he has a speedy recovery although we expect the ‘Spindrift ‘ will appear soon with stand in skipper ‘Pam’. 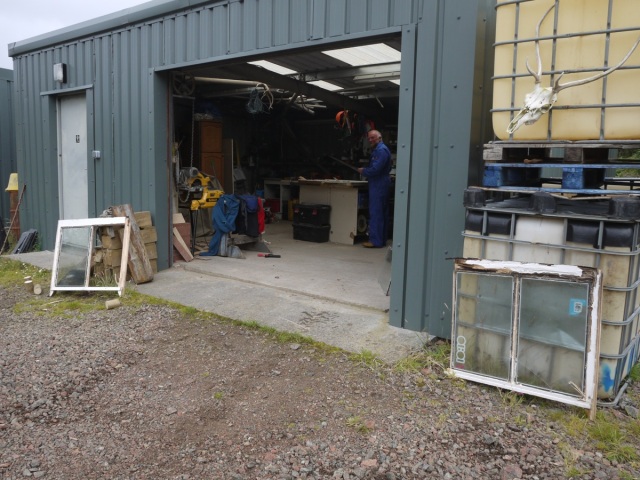 Last Saturday we had Strolla 2 (John and Jane MacInnes, Tayvallich) visiting. Always good to see them and get all the news. John volunteered to do a job or two so I set him to removing the old glass from the Lodge windows. (‘Quite successful)!! 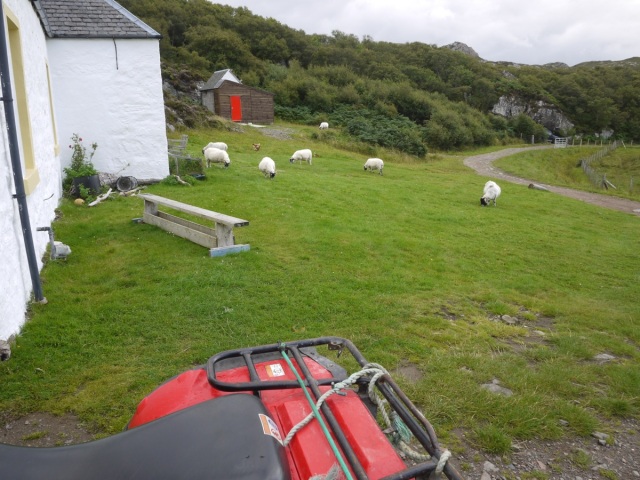 I had mentioned to Dave, Lorraine’s brother who was on holiday with us, that I was going to cut the grass. It took a while to register but he got it in the end. Why waste the petrol.

Later in the day the lads, Adam, Dave’s son and Josh, from the cottages had an hour at the targets with the .22. Boy’s stuff but good to have the opportunity to let them understand the consequences of shooting. 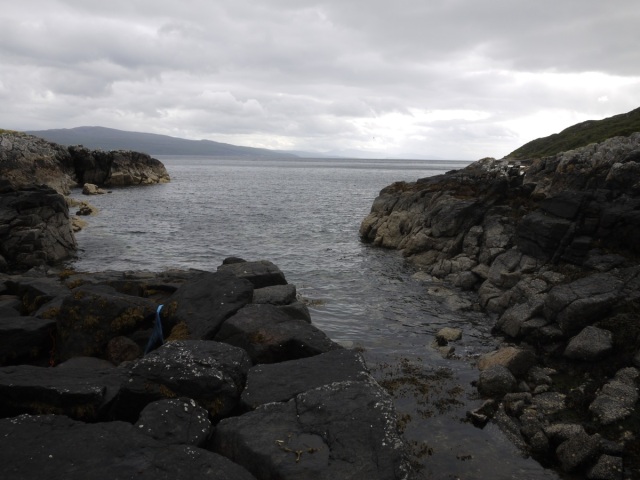 We finished up with no bullets so a walk in the woods and picnic at the pier on the East side was a good way to spend a breezy Sunday afternoon. The pier is incredible, some of the stones must weigh around a couple of tonne, how they shifted them and they are on top!! I have an idea this pier was used for whisky smuggling, although it is the next bay that has the gaelic name (the place of the black pot). 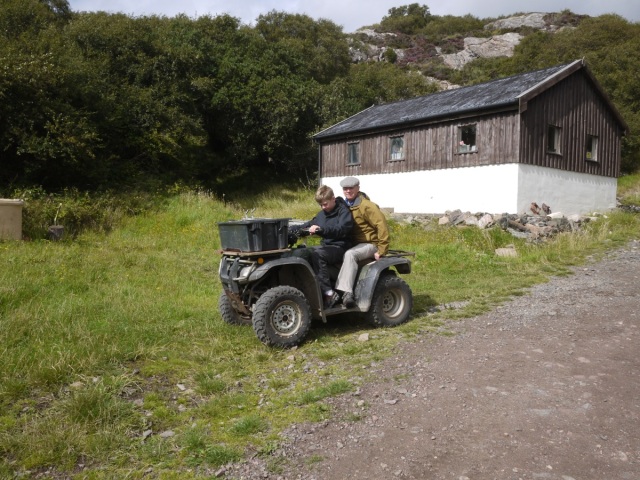 After the shooting the next issue was to learn the quad, so Adam spent a bit of time running up and down to the pier. Even taking his Dad across to Dry Harbour without a problem.

Nothing left to do but have a wine and a bit of food to finish a very enjoyable Sunday.

Monday, myself and the two lads headed south to look for stags, Adam’s driving skills deserted him but he got back on and persevered, well done. It had been a windy day, although there had been the odd yacht about, it was a surprise to see three in the harbour on our return from stalking. But something did not look right so I headed down to the pontoon. I called up one of the yachts and found out that the Yacht ‘Ad/Ab? Fab’ had lifted his anchor whilst trying to set his own, then bumped into the other yacht in the bay, the Countess of Sleat. Ad/Ab Fab was having trouble anchoring as it was really blowy at the top of the tide and at 8.00pm he disappeared out of the harbour in 30 knots of wind, never saw him again! 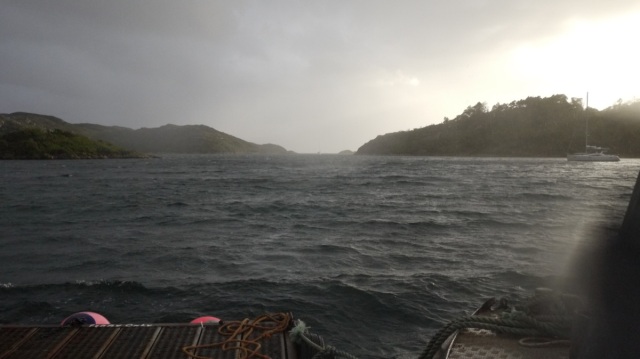 In the morning the crew from the Sleat boat came ashore and it turned out to be visiting Israelis who had been here several years ago. They reported that Yacht Ad/Ab Fab had taken off their navigation lights  when they were bumped, but they said they were lucky it was not more serious. The gusts had been pretty violent at that time and trying to anchor in a strange harbour, anything can happen. 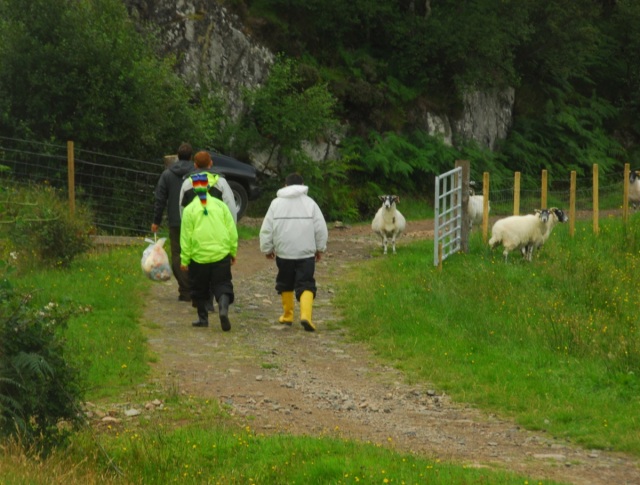 They were travelling with another Sleat yacht and they had sheltered in Fladda that night arriving early morning on Rona. The crew of that boat took their rubbish for a walk, I declined the offer of it, even the sheep were perplexed.

The wind had thrown up a pile of seaweed in the harbour and lorraine was keen to collect so the boys and Lorraine gathered a full tractor load, despite the lions mane jellyfish through it. 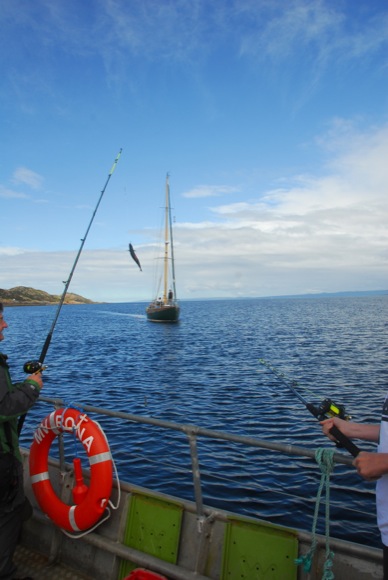 Next day the cottage folk had booked a boat trip. The weather broke, settled down and we headed down to Kyle Rona for some fishing. We saw stags on the shore, an elusive otter and caught some fish but the sea remains very quiet with not a lot of fins or seabirds to be seen. Yacht Aquilla, came alongside, Ranald Coyne a Rona visitor of old had a chat and headed into Big Harbour looking for showers.

It got a bit grey so we headed near home and picked up a fleet of creels, the passengers shared the catch.

Next day Thursday we delivered Adam and Dave to Portree, picked up some timber and a fortune of petrol before returning to Rona. The sun was out and it was a stunning day. On arriving home we got unloaded and just then  MV Seaflower arrived, the harbour once again becoming a very busy place. The tide was very low so we unloaded MV Rona just at the turn of the tide, much easier than waiting till 10pm at night for high tide.

Quite a few yachts arrived that day and a welcome visitor Andrew Thompson from Comrie, Perthshire and his crew, on Yacht Tarskavaig. He delivered a couple of bottles of wine to myself and Paul, my nearest neighbour.    Paul’s Blog .  Andrew has been following Paul’s Blog for a while and stumbled on this one, very nice to receive a bottle of red on a Thursday afternoon, I’ll deliver Paul’s soon. 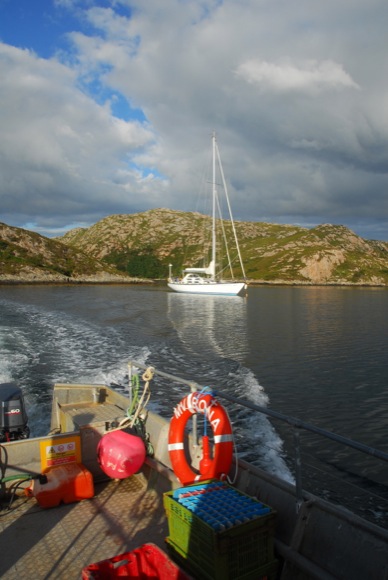 Andrew cleaned out our seafood stock so late that evening myself and Lorraine headed out for some more fish. It was a fantastic end to a glorious day, Yacht Longbow was on the mooring and at 40 tonnes a fair test. 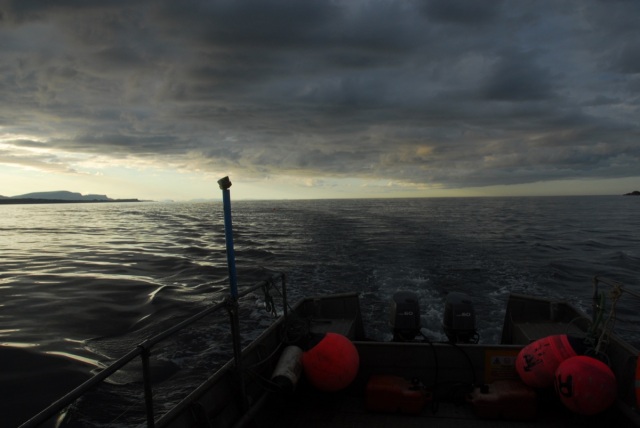 We arrived back as the sun went down and followed this little boat in, it looked like a Corrybee, the same type of yacht that Ellen MacAurthur sailed single handed round Britain (I think), of course this sailor was single handed too, it looked tiny besides Longbow.

Next day Josh came over and we spent a whole day cutting up the stag that I got on Monday. It was not a good day, pretty grey so easy enough to put a day in at the butchering. Now the freezer is full we must start selling some (or eating it).