We are a long way away from new house builds and highland weather, we are down in Padstow, Cornwall enjoying sunshine and warm days. A lucky week weatherwise and we could call it our summer because we did not have one from the 31st of July on Rona, that is for sure. Not even the seagulls trying to get in through the roof lights at 6.30am are enough to wake us up, only after an hour or so they get a bit annoying.

Again, it has been a while since I blogged, lots on for sure and trying to grab a minute (or hour) to blog was proving impossible, so there is a lot to catch up on and for that reason I’ll try to cram into these blog posts over the coming few days. Rain tomorrow I hear so maybe another tomorrow.

I did a quick one in between but there was no time……….just a brief update.

So, what has been happening. 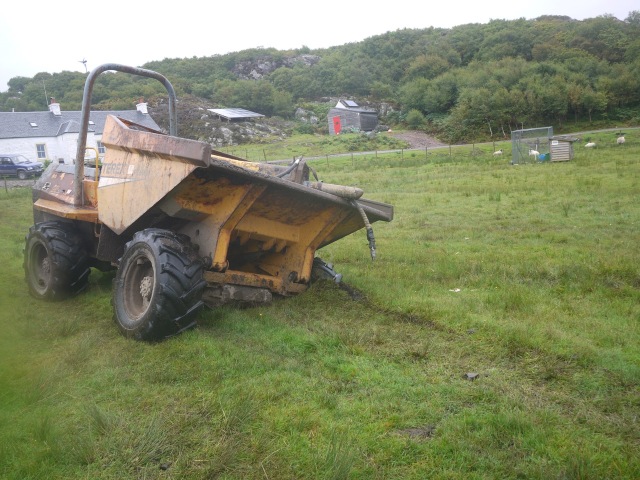 I see by the date that this is the 7th of September, just about sums up the problems we had. There was so much rain that the field has turned into a bog, maybe I was expecting too much to be able to lift the pecker out of the field. 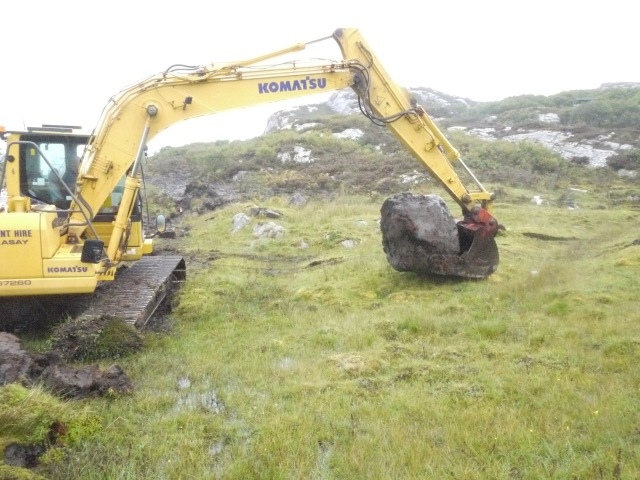 Whilst putting in the drain Hugh had come across this beauty, just right in line with the pipes and in the middle of a bog, now it is on show after being buried forever.

At the back of the Utility Room the water had been pouring in so an extra drain was put together and it so far has been really good taking the ‘river’ away.

When we had 10 tonnes of cement delivered in June? we were wondering if we had ordered too much or miscalculated but as it happened we were right down to the wire with our measure, hard to believe but there it is. 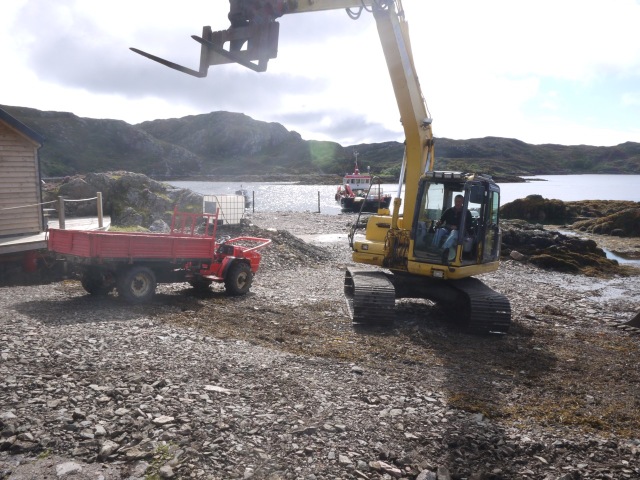 I’ve lost count of the landing crafts by this time. 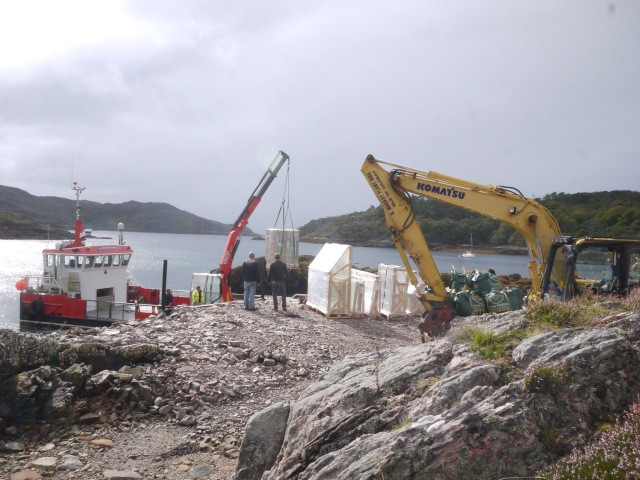 Maybe no 5, but a very important one. 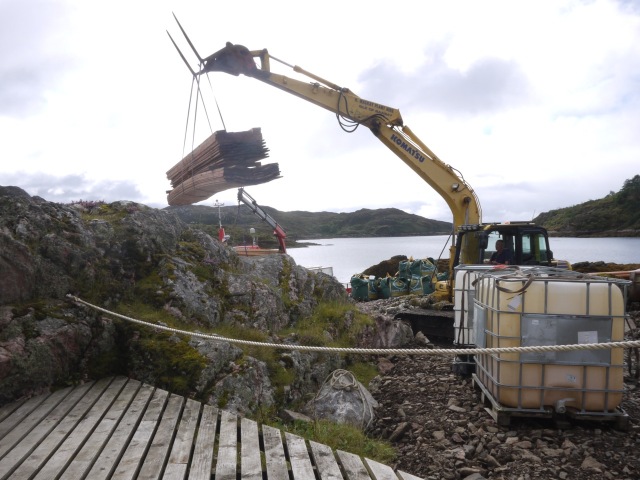 More scaffold, more fuel, more timber and most importantly the windows. Now this was a very stressful moment, getting the windows from Scandinavia, via Glasgow, to Mallaig, then onto Rona. Up to the site unloaded and then into the building. 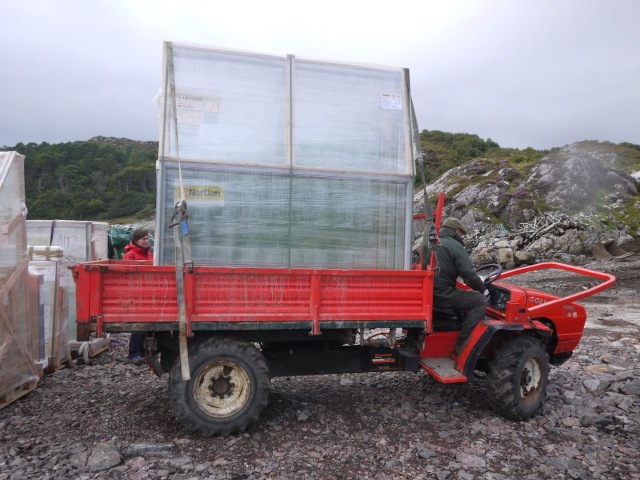 Maybe Not as Nor Dan Would have done it.

Drainage on the Wettest Day

Back to the day job and we had to put in the new drains, of course it poured all day, what fun in the black treacly peat!!!

Despite the rain the yachts still arrived and this one in the middle of a changeover at sea with MV Aspire. Kevin had a rope round his prop’ and we went out to assist but it did not stop Aspire running and with no diving gear it was back to Portree to check it out.

Next day, despite the blue sky it rained again later. But what was worrying was the amount of water pouring out of the stack of wood when I lifted it.

Our new arrivals were from London, enjoying a very wet week of weather but since reported that they had a good sail round the back of Skye to the small Isles. Well done them, in a particularly poor sailing season.

Happy Sailors (they had our last can of beer!!)

We had taken delivery of an extension boom for the digger to lift the main ridge beams, our calculations of weights and lengths were just about to be tested. So a bit apprehensively we gingerly tried the beam.

That went ok and we now had to pack the beam out out adding quite a considerable weight to the lift but we were confident. The boom was a one off design by MacKay’s of Invergordon and it is possible it will only be used once, quite an added expense but better than the cost of a crane/landing craft set up.

Thinking About Roofing the building

Quite a major time as we moved from the sub structure to the topside. 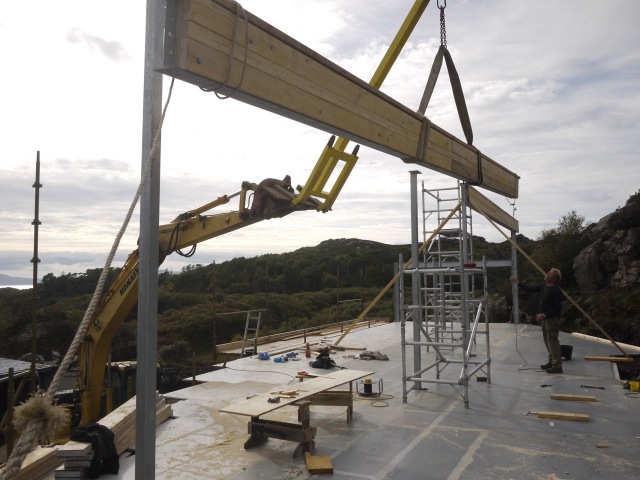 We had a wee bit of a hiccup with the middle upright, much scratching of heads and we gave up. Later that night I had a look at the plans and there it was. The middle upright was upside down. Doh!!! Easy mistake as there were no codes on it unlike all the rest of the steel, but now it was ready for the final tightening down. 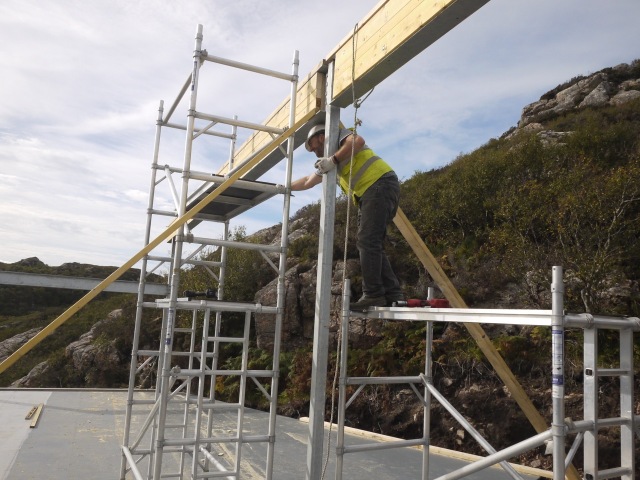 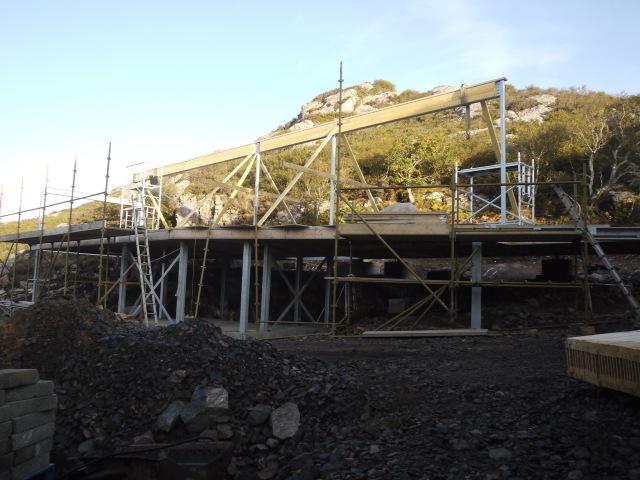 All of a sudden the building started to take shape and although we had or have had rain every day since the 31st of July there were some bright moments. 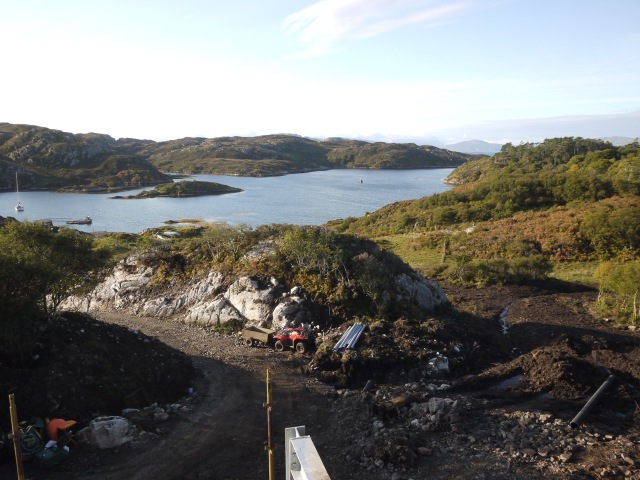 The view from the ridge beam was on this occasion dry and bright, with the Green Isle in the Bay and a lone yacht. 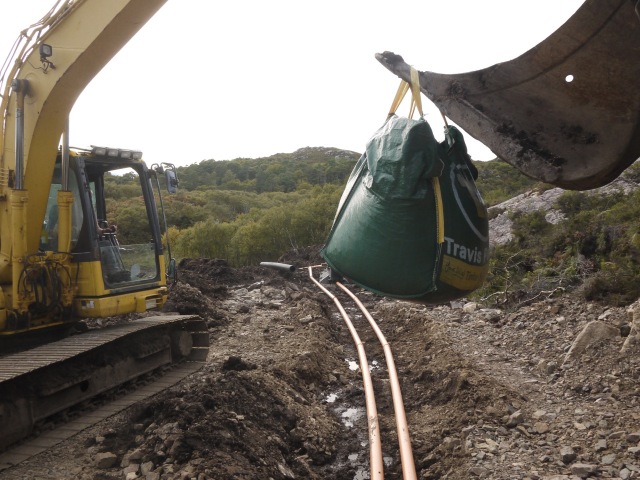 Back to the drainage

A wee spell of dry weather and it was back to the mud and drainage.

Good to get it back filled and the pipes protected.

Although a wet summer we had not had the wind that we usually get, in fact it has been pretty calm until October. 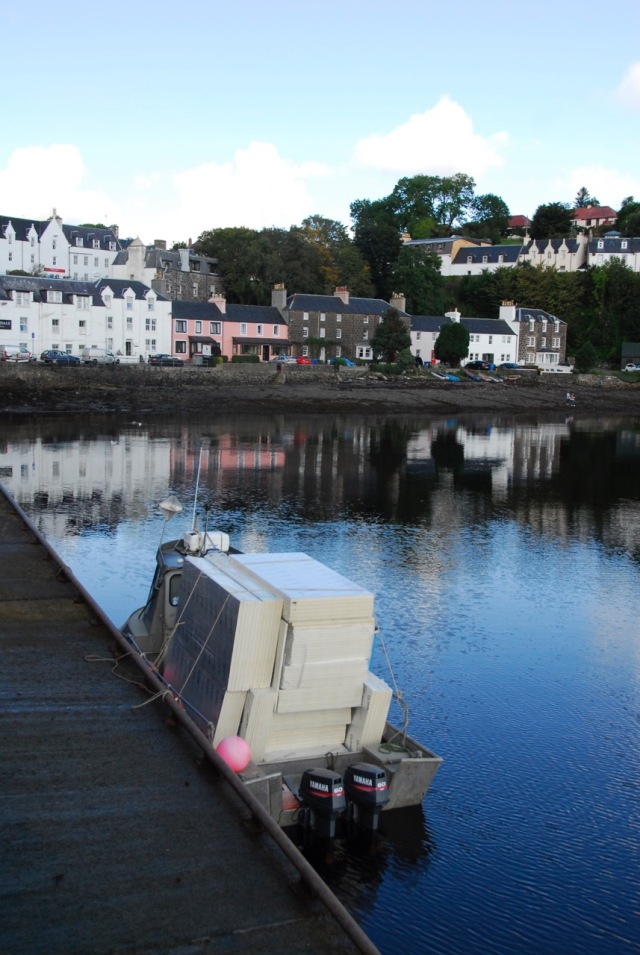 Meaning quite a few trips to Portree in the MV Rona.

But on the way back I just missed the tide so we had to be a bit inventive unloading the boat.

Meanwhile Ian was getting on with the framing and it was coming along fine. 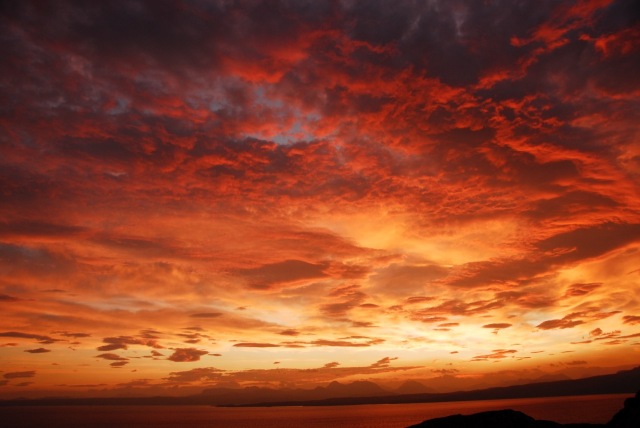 Getting into late September is a special time, the sunrises are getting later and you often wake to bright red skies, this particular week we had red mornings every day despite the rain.

Always Worth Getting Up For.

Part of it at this time is the Rut is just around the corner and I like to get up to see how many big stags we have.

Our Master stag ‘Torn Ear’ was never far away at the start of the rut but he was posted missing on the last two weeks, hopefully he will turn up. 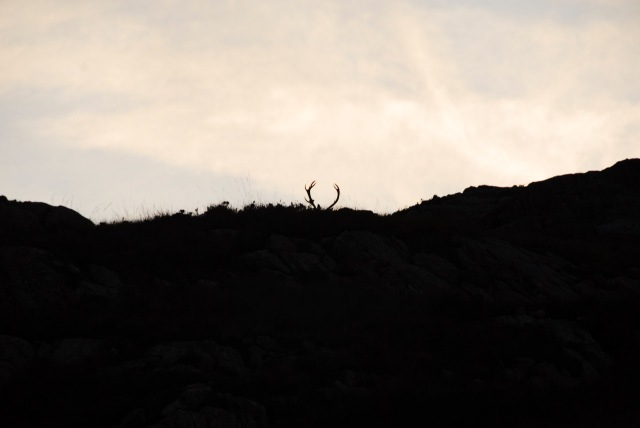 One of his Mates

More about the stalking week on our Red Deer Page (Coming Soon)  . 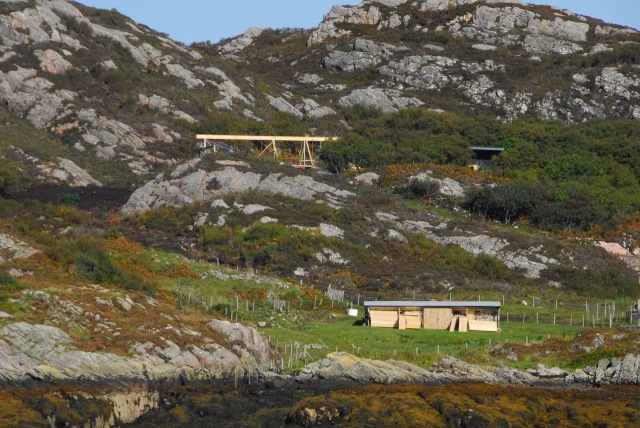 With calm weather, it was good to get caught up with material from Portree, unfortunately since then we have a backlog but fingers crossed for a few days in November so that we can shift some stuff. 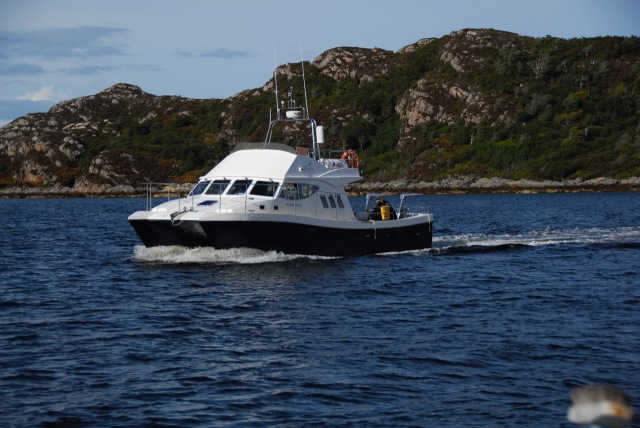 MV Seaflower on a Rare Visit

We have hardly seen the Seaflower this year due to weather mainly and even then I was away in Portree most days they came but good to catch them even briefly.

As the structure was slowly threatening to close we needed to get the windows inside so that we could handle them (and get them sheltered!!). They were pretty heavy and one false move!!!!

Like this one when the bottom fell out of the IBC, a new one on me. It had rusted away. Fortunately we lost none of the content.

All present and in store, but not in place, Yet!

That is a very brief take on this last couple of months up’s and downs. Been good to get to the stage we are at and on our return it is the roof and wall cladding. Back to holiday time now. 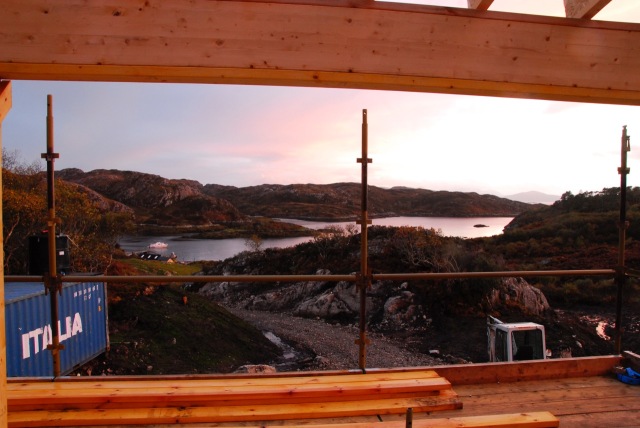 Just looking at the pictures and saw this one. This motor boat came in we think for a couple of days but got well and truly storm bound, they could have left on one day if it was Portree or Gairloch they were going but I think it was round the back of Skye they planned. So, seven days later on a late calm sunset night we saw them depart. Our last ‘Summer’ visitors!!

As for Padstow………Summer’s still here.