The weather is very good, it continues to be an open winter and now Spring is here, the trees are flushing and bulbs are poking through. Time to get organised for the busy year ahead and of course building a new house. But first of all life goes on or in this case ‘nearly death’. Sheep try their very best to get into the worst case scenarios. This time ‘Limpy’ (due to her bad joints) ended up stuck in the bog, she was very fortunate I walked up to the garage for the bike first thing in the morning of the 20th Feb’ to find this.

Just About Had it!

It was a bit of a job to drag her out but I got her onto the trailer, back to the sick bay and a bit of veterinary care, in the shape of a bucket of sheep feed. I left her to recuperate and headed over to the Forest to try and crack on with the logging. 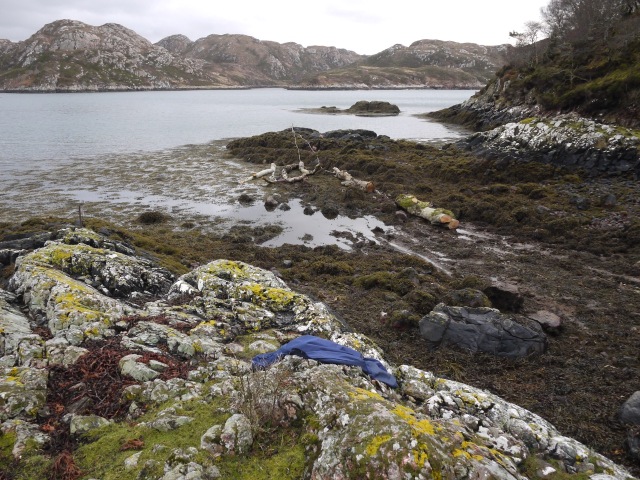 Kevin was due soon, so there was a plan to drag the remaining trees to the shore and set them up for a pull by MV Aspire. 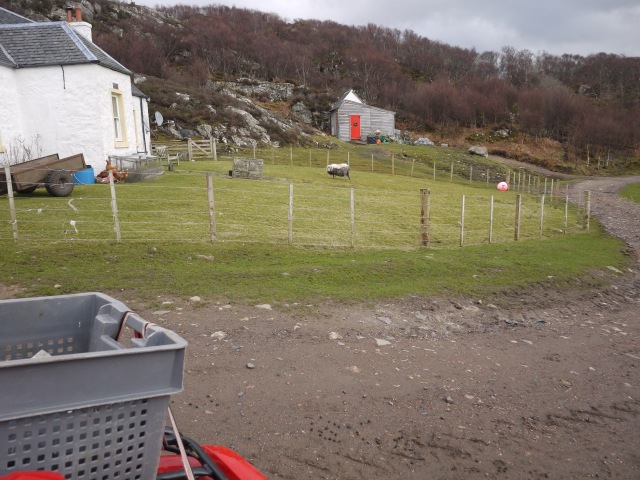 Back for lunch and ‘Limpy’ was up on her feet enjoying the lawn and looking a bit better.

After Hugh’s visit to look over the future energy requirements a couple of weeks back. I had been advised to create a vent in the wall due to the gassing from the charging batteries, I had it more or less closed because of the damp air getting in in the past but this winter has been pretty good and the shed is bone dry, so hopefully this vent will attract a clear flow but still keep out the rain.

With the New House looming there is much to do. We did not intend having lambs this year and I do not think our tup was busy with all the ewes, but we still have to pre-lamb dose them and have a look over them after the worst of the winter weather, they were all in good strip. 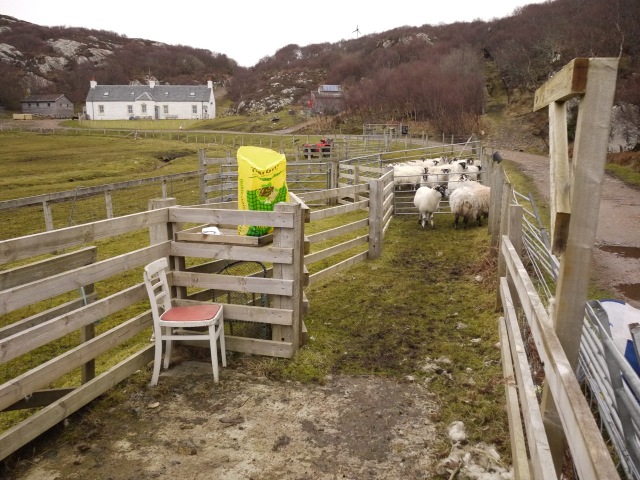 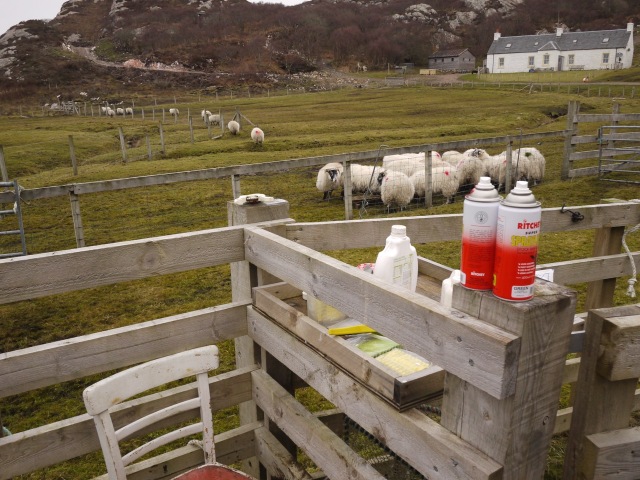 Glad To Be Out

After a bit of a rodeo we got them into the pen and quickly sorted them out giving them all the potions necessary at this time. They are always glad to get back in the field after all the handling. 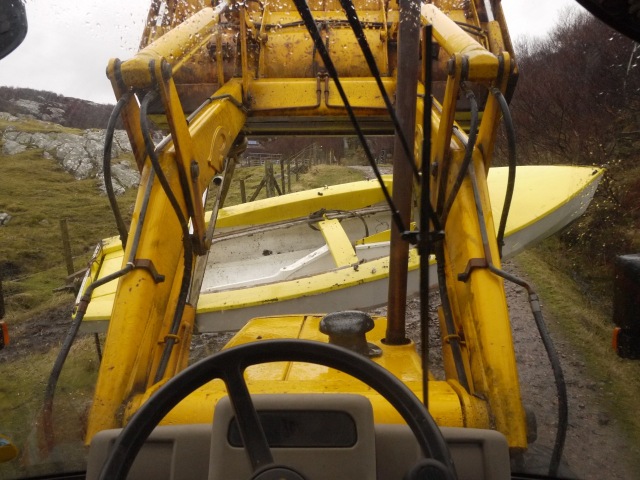 With an eye on the seaweed/rocks around the logs on the shore over at the forest. I had a thought to resurrect the Wayfarer and turn it into a rowing boat so that I could pull the logs out for Kevin! Not the best thing to row but with the 2.3hp Honda on the back I was sure it would work. I had a few tins of nearly finished filler and once I found the hardener I got most of the holes (I could see) filled, rowlock holders fitted and a new board for the outboard

Leaving it to dry out I then took a walk around the fenced in area of Big Harbour. I was looking for the sheep that had taken up residence on the cliffs. Only one contender was found but there are so many hollows and holes I’m sure the other 4 are thereabouts. This wee lamb looked pretty small and despite walking it back to the road it turned round and ran past me I guess back to the cliff where I found it, they learn fast.

I got the boat finished and the filler had set fine, first thing in the morning last Tuesday prior to Kevin arriving I headed out to try to pull the 5 logs out clear of the seaweed and rocks.

Bag to The Logging

Much pulling and sweat later I managed just one log,  the rest had sunk!!

Back to the drawing board on that one as the tide was falling fast.

Stuck on the Bottom

The log I did pull was sort of floating but with so much weed it caught so I left it for the tide to leave high and dry.

I put the dinghy over to the pontoon and despite taking in a bit of water I was sure it would be fine there until Kevin had been and gone.

We had a visit from the Factor last Tuesday and I took his colleague David first north and then south to see the extent of Rona (quickly).

Kevin, meanwhile was on the mooring due to the very low spring tide. There is not enough draft on the pontoon for MV Aspire during these tides and normally we avoid them but as they were waiting the only way to deal with it was to go on the mooring and take our visitors out on the tender. As Kevin was there for a while I asked him to check out the mooring, the report: Well worn and the top chain overdue for replacement. 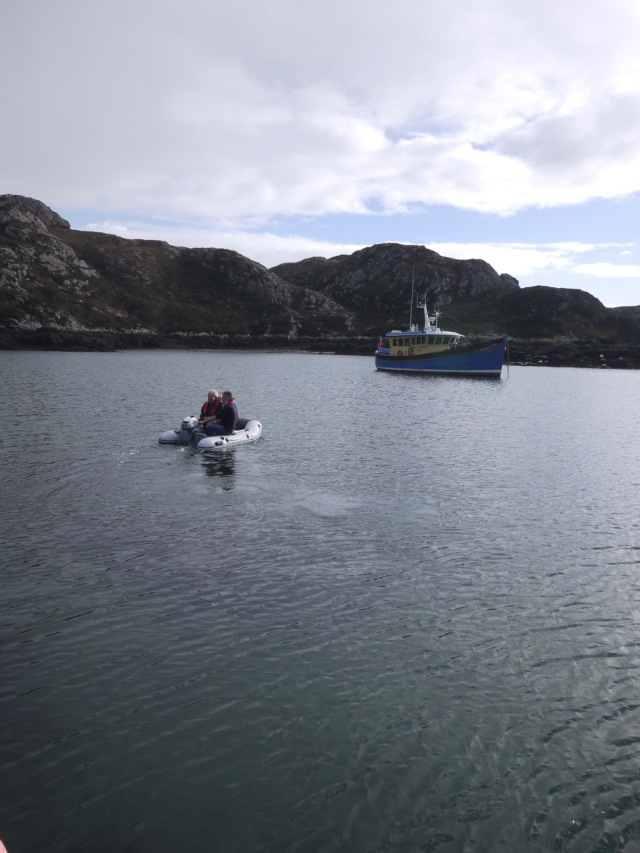 Our guests left mid afternoon and I went back to the forest to try again at setting up the logs for pulling. I had proved that the wee dinghy could pull the logs, so floats were fitted to the sunken logsand a plan was hatched to pull the logs over the next morning’s high tide.

One of the problems we have on Rona is that we are like a net for plastic rubbish from the sea. The bays are full of it, in fact there are years of it buried under the grass with odd plastic colours sticking up out of years of growth. Miles of rope and many fishing buoys, I sorted out the logs and took a boat load of this rubbish back to the shore. We will bag it and send it back with MV Aspire next visit.

As Far As They Can Go

Next morning was much easier, the weather was perfect, the sea calm. Lots of birds about and I did see the Great Northern Divers that MV Aspire had reported when they were on the mooring. Much more important the logs were now floating, free of weed and after an hour I had the three last logs by the shore ready for blocking. 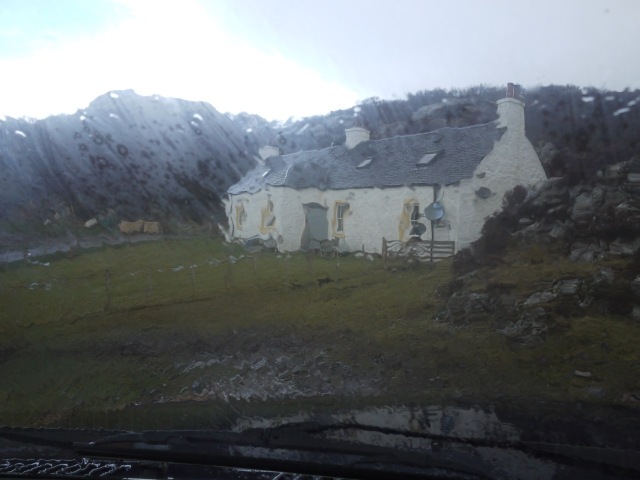 Caught in The Only Shower of The Day

The next day was paperwork day, the only job outside was to measure up for our new solar panels. The frame is going beside the genny shed and Hugh wanted measurements. It was another glorious sunny day although very cold. It was going against the grain working inside but needs must. So it was with a certain amount of relief I headed out to take levels and measurements. Just as I arrived at the job, the heavens opened and for 5 to 10 minutes it absolutely poured down. Typical! I thought it was on for the day but it quickly passed and we got our site sorted out. 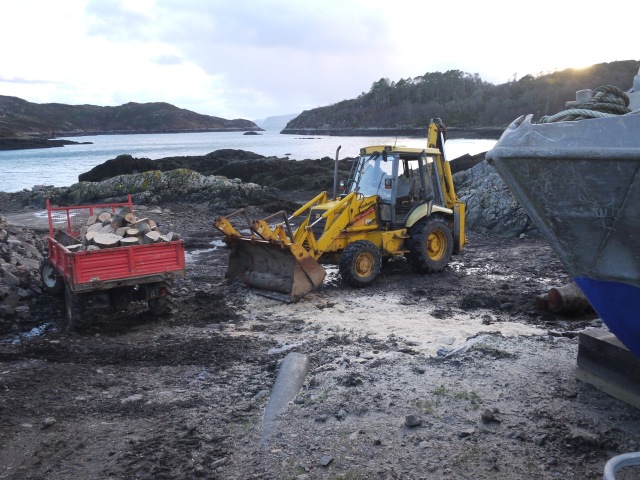 By Thursday last we were ahead with other jobs and decided to have a day at the blocking.

Only one trunk to do and we will get that next week. 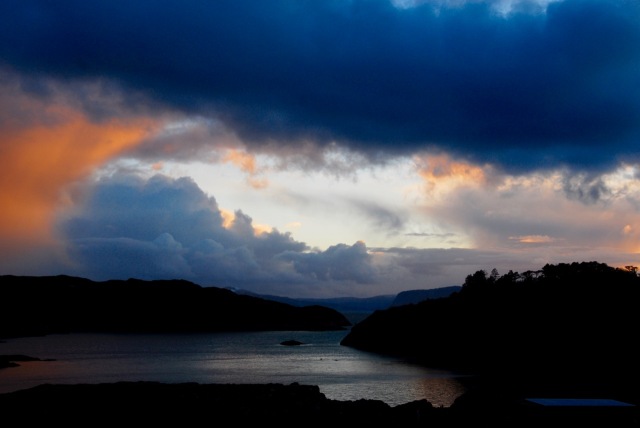 There Ended a Lovely Day

It had been a really good day and at the end of it the sky was stunning. It started to get red late so we were hopeful of another good day tomorrow.

Sure enough Friday it dawned clear, I was thinking I should go out on the boat to take a few photos but other priorities were top of the list and we decided to do them then go South in the afternoon.

Beautiful Days Looking Down to the Skye Bridge

The end of a good week and the colours on this outing were fabulous. The blues at this time are so deep.

The Time For Counting Deer

I was going to Garbh Eilean where the stags hang out in the winter. I was not disappointed, I saw three on the horizon but they soon took off.

I found them on the steep North East side and they did not hang about.

They headed down to the shore and took to the water, I nearly missed the shot as the light was so dark in between the islands.

The Visitor Was Last Off

The big stag hung back, maybe he was a Raasay stag and wanted to head South, who knows. But he eventually swam too and joined up with his mates, last seen heading North. 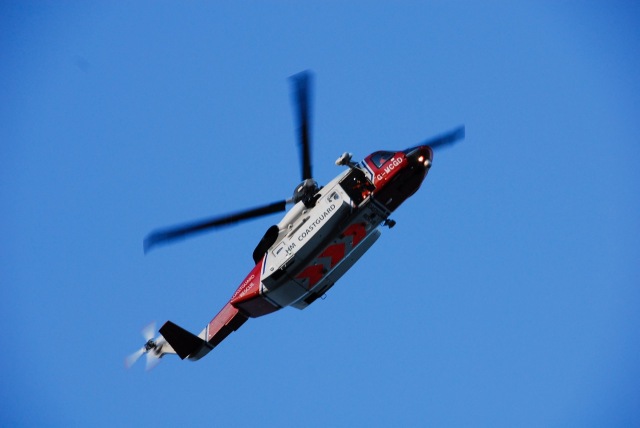 Last thing in the late afternoon I headed over to Dry Harbour to check the generator/houses. As I arrived at the schoolhouse I heard a noise and right behind me the SAR helo’ arrived, they had a couple of passes and a wave out of the door then they were off. The small herd of deer on the grass in front of the schoolhouse were more concerned with me, the noise of the helo’ did not seem to bother them.

Lovely Night For a Flight

Yesterday was a quieter day, the weather was not so good but in the afternoon I headed out for a walk through the forest to see if any treasure had been washed up on the beaches, sadly no just more plastic. 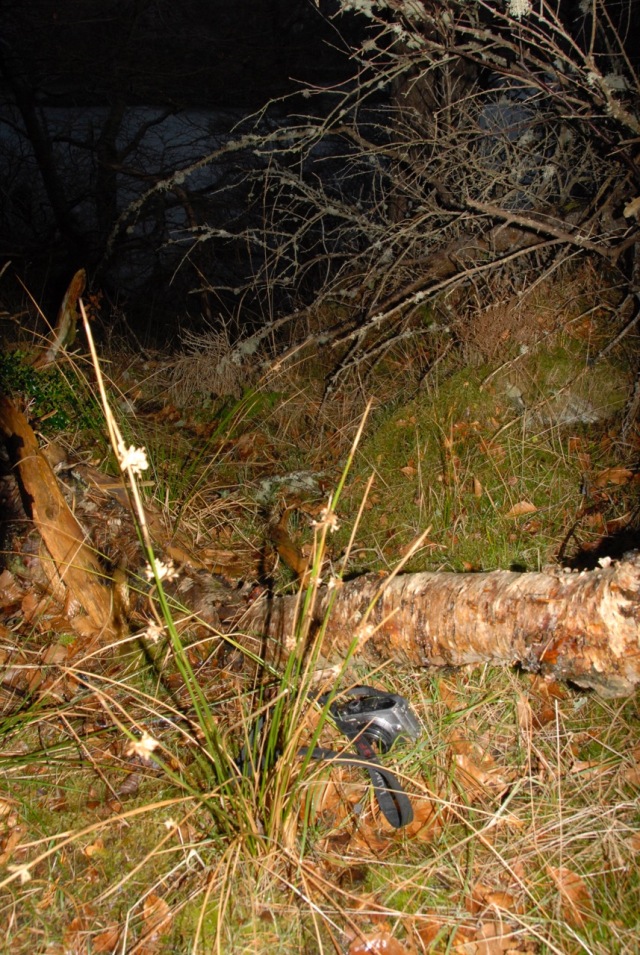 But on my back I came through the middle of the forest and there under a branch was the camera I lost in December, the mystery of the camera had bothered us since it went missing then. I remember taking photos of our guests arriving on that day but never saw the camera again, it was damp for sure but after a night on the radiator and a new battery surprise surprise the camera still works this morning, for how long we will see.

This morning I did go out for a sail but not too early, again I was looking to get a photo of the Northern Divers, I had seen them from the shore the day before. Not much doing to be honest but the view of the Storr is always worth a look. The bay was full of seals as usual and they were unconcerned when I sailed past.

They seem to have an easier life than most!!!!

1 Response to Springtime Planning and Preparations