I came home from Dry Harbour a week last Tuesday to find our garden had been invaded, but no problem, it wasn’t the window peepers it was George and Dive Earle off their motor launch, M V Comet. I have known them since I have been here and now in their 80’s they continue to motor round the Western Isles enjoying their days. 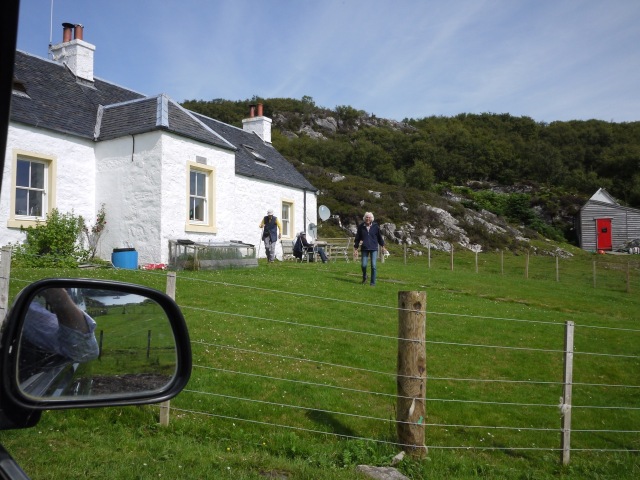 They had stopped off to get all the ‘Estates’ gossip and of course to buy some venison. 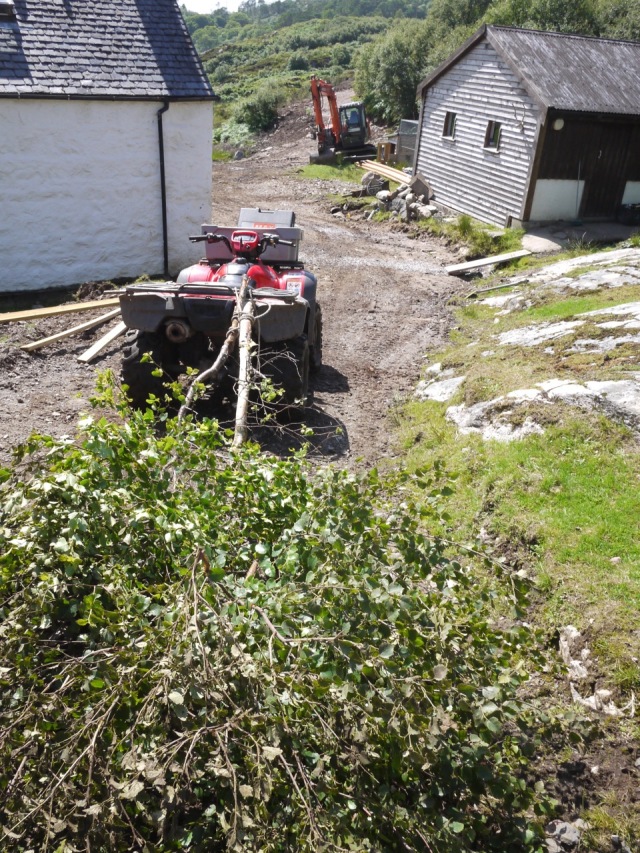 The drain work was still a bit of a mess and after I had said cheerio to my garden guests I had an hour or so sweeping the road with my makeshift brush, very effective it was too.

First thing in the morning we had made a batch of sausages, thankfully I remembered them as I was sweeping up. I had put them in the freezer to stiffen them up prior to bagging and caught them just in time. As when they are solid stuck together it is impossible to separate them. I got that out of the way and it was off to the bothy to cut out the walk way grids as some on the pontoon ones were getting dangerously rusty.

Next day yet more repairs, the new thermo coupler had arrived and it was time to put the cooker back together. I sorted that out and got it back into the cottage working fine.

It had been a busy mixed week and we were very happy to accept an invitation to Yacht Escapade for dinner, Nick the skipper and chef produced the yachts signature dish which was cooked to perfection. Head chef Anne was absent on family duties but the spread was very impressive and welcome after the week we had just had. 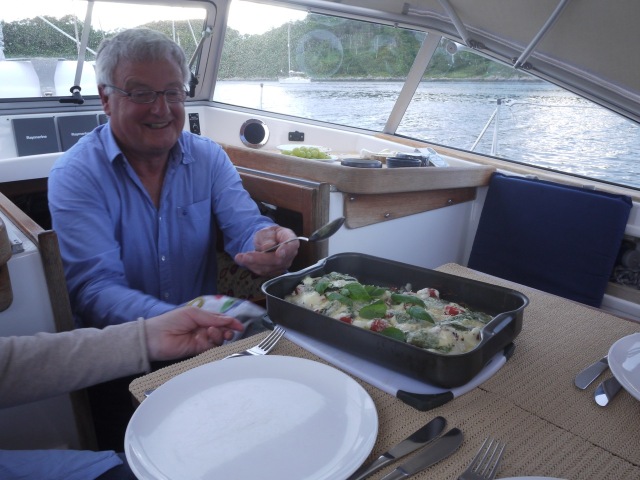 Saturday, MV Aspire was early and the next visitors were ready for their week on Rona, Kevin had been re-painting ‘Aspire’ but rain had been holding him up although having half the hull painted looked interesting. 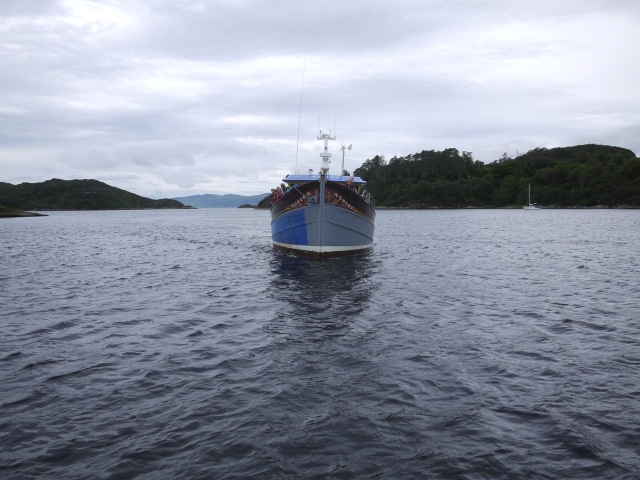 We had run out off drain pipe and had to get another 450mm which was a bit of a handful, just as well Aspire is as big as it is. 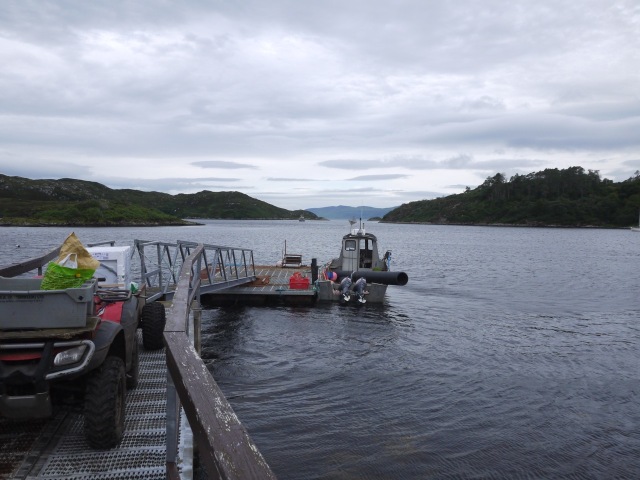 The weather had been trying ever since we started the drains, we were hoping for a better week, the clouds were certainly interesting. 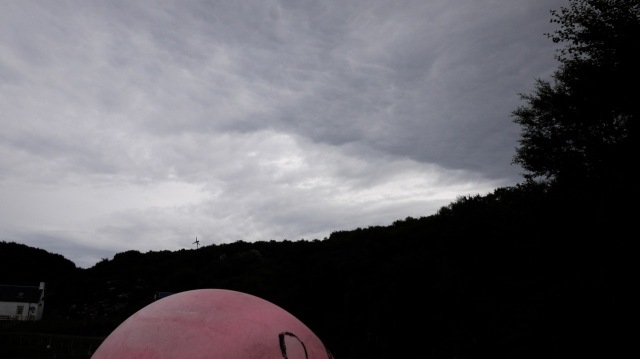 Not as impressive as other Mammatus clouds and the picture doesn’t do them justice but all the same, seeing this type of cloud is always a surprise.

Jim and Helen, Here for a Week!!

Jim and Helen had come on the Saturday boat, it had been ten years since they had been to Rona on honeymoon, now with a family of two they had a little bit extra luggage. I’ve seen all sorts of things coming over for a weeks holiday, one time I spotted an electric drill, I’m still trying to work out what that was for ? 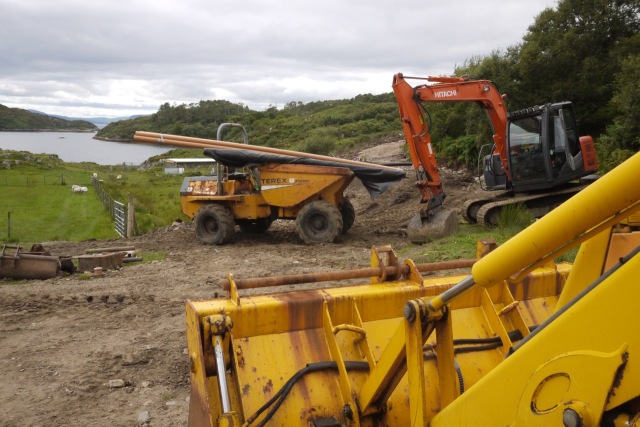 Back to the Lodge and the road had hardened up so I got the dumper going and did a bit of tidying. 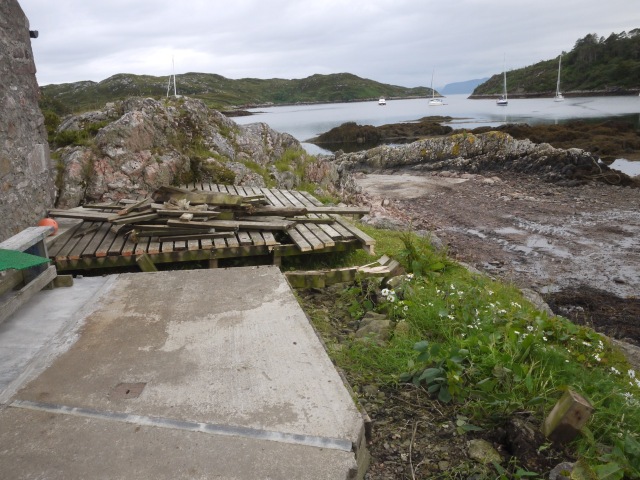 Ian the joiner was coming the following Saturday so there was a bit of work to do before he came, we are putting a lean to onto the bothy so that the workers coming to the house will have a bit better facilities, no time like a Sunday afternoon to do it. I had a bit of time as Dan’s Stardust was taking the Sunday guests out on one of his trips, but he had no takers as there had been a bit of engine trouble, so only our guests this time. 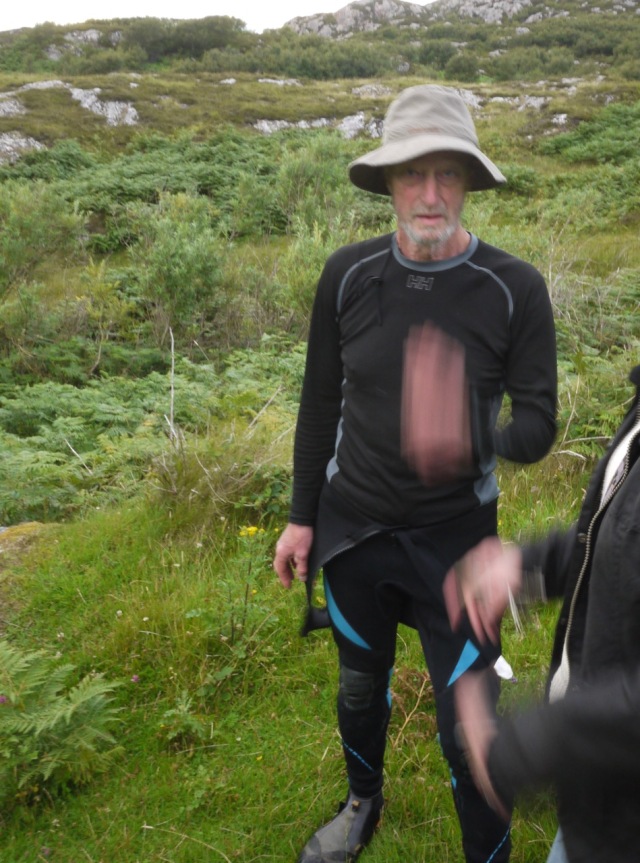 Was this Jeremy Corbyn on holiday?

We got out guests, then headed over to the cottages. Our honeymoon couple Jo and Alice were looking forward to a quiet , remote Island experience. We were disappointed when we arrived at the cottages to find three kayakers having their dinner and getting ready to camp in the field right in front of their cottage. As usual we went though the motions of asking them to leave, find a less obtrusive place etc etc. Right to roam was quoted, a few other excuses but for us there is no excuse. If you are going out looking for an adventure in the remoter parts. WHY on earth would you want to camp in front of three holiday cottages, not to mention the toilets that don’t exist but have to be used.

When it was pointed out to them by our first holiday cottage visitors that there were signs up saying not to camp there, they were told by the kayakers that they were tired and that they were going to camp anyway. I’m not going to quote the land access legislation again, but, maybe there is a bit missing under the heading ‘Common Sense, respect and Courtesy’. Hey Ho, maybe one day.

Last week I have been catching up, getting the drains ready for Hugh’s next visit and ready for Ian coming to work on the Bothy.

Thursday I headed over to Portree early, The views of the Old Man were pretty good, I will one morning go over there to take some pictures with the ‘big’ camera, the light in the early morning shining on Skye can be pretty spectacular.

The Old Man of Storr Through the Clouds

I had a good sail until just outside Portree when the Starboard engine started to cough but thankfully despite losing revs’ I made it and got back to Rona with a pile of building material safe and sound. 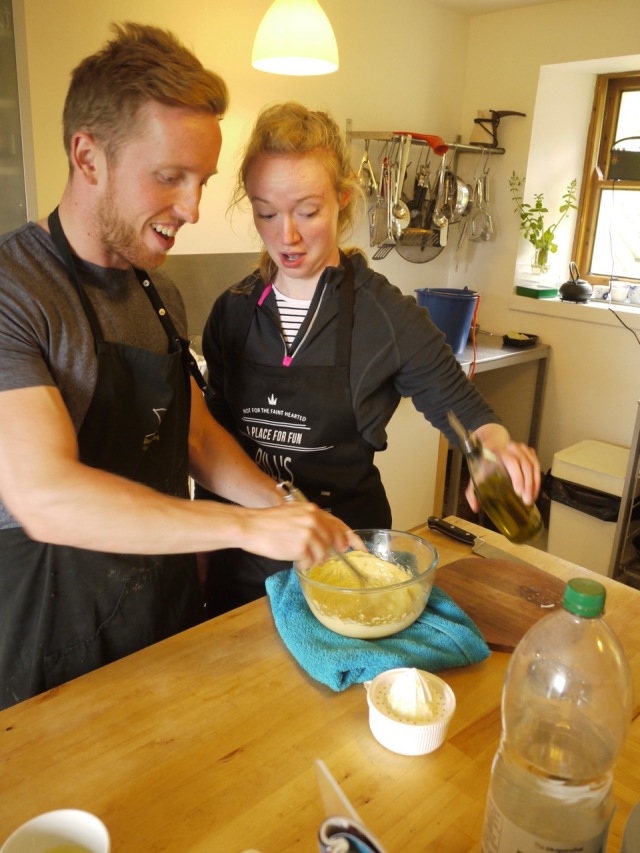 Cook What You Catch

Friday I fancied an easier day (and that was a very wise move!!!). I offered Alice, Jo and Jim a boat trip then a ‘Cook what you Catch’ lunch. We were getting ready to head out when I got the call the power was off at Dry Harbour. I gave it a quick fix and we were off. We had a good couple of hours catching a variety of shellfish which we took back and then spent the mid-day cooking it all up for lunch. 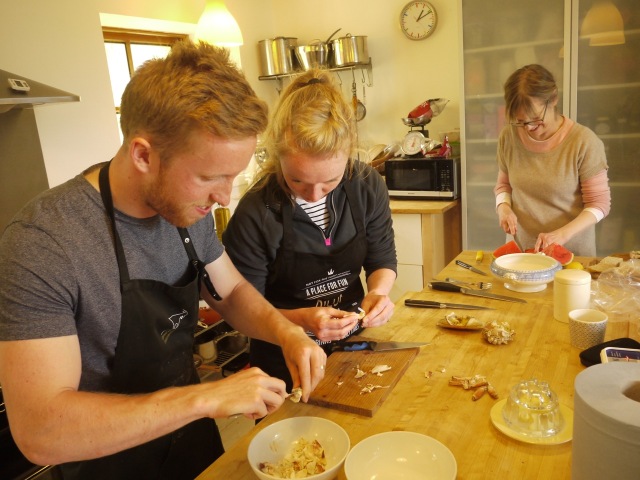 Alice and Jo got right into it and were willing helpers.

After a very full lunch, it was back to the grind. Jo had shot a stag during the week and they were keen to see how we butcher the carcase.  We were just heading up to the larder when Paul phoned from Raasay, he was having trouble with mink killing his hens so could I lend him some traps. 6 new hens arrived and we put them into the old hen run. Better here than food for the mink although……. 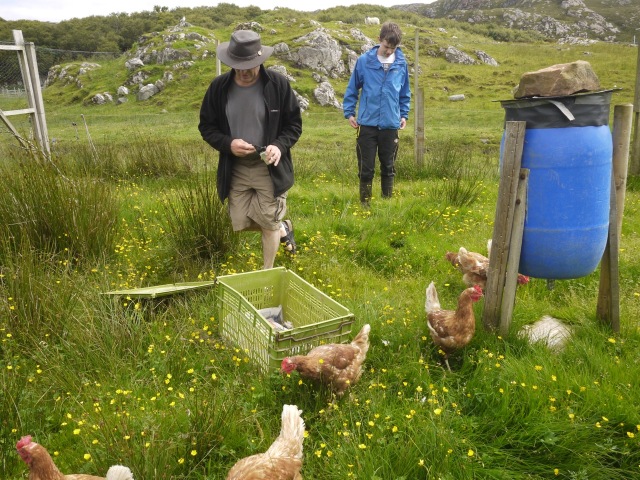 Lorraine was worried that Paul’s dog Molly would have a go at our hens so Molly was put into the herb garden for her own safety, much to her disgust. 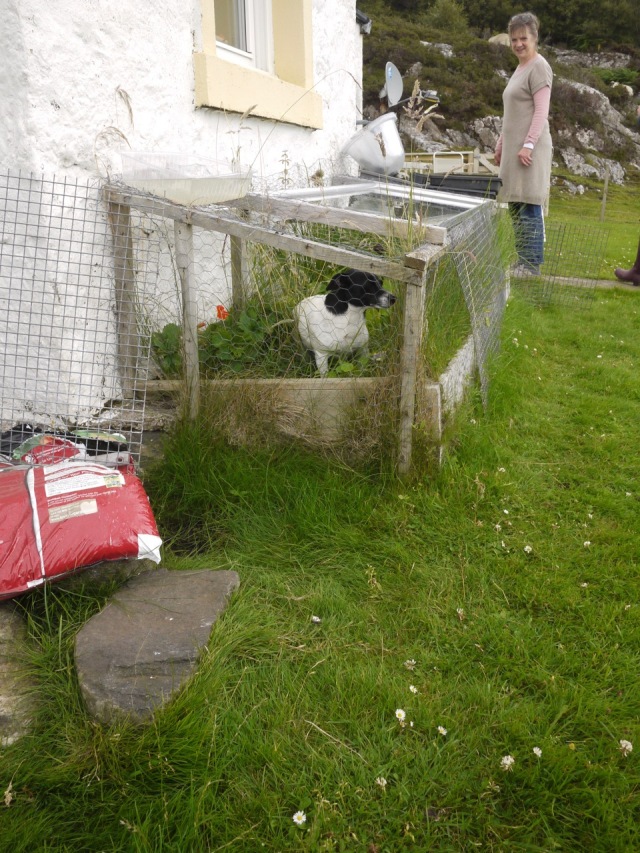 We had a cup of coffee with Paul and Ross, got all the news from ‘Life at the End of The Road’ and they were off.

And They Are Off/Traps on board.

Up to the larder and a venison saddle plus one haunch later the job was done, Jo and Alice were ‘again’ attentive students and willing helpers. Just as we were finishing John and Jane MacInnes, ex Yacht Strolla not Shivinish? arrived. Good to see them, John always likes a wee job on Rona and I have plenty. So a wee dram was taken in the larder and we were invited out to tea, excellent. 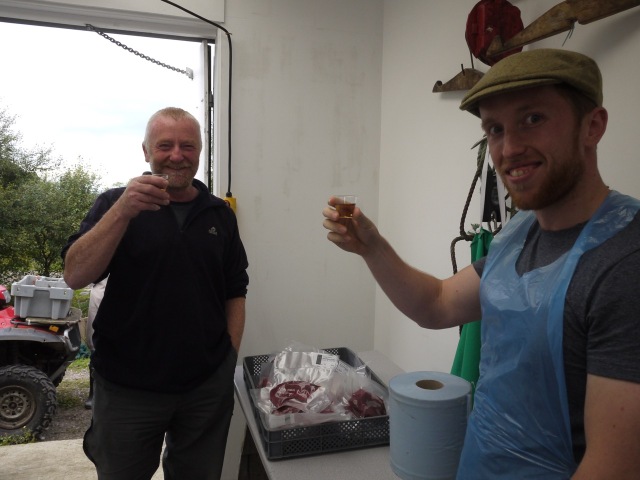 We ran the honeymoon couple over to Dry Harbour then back to the Lodge for a quick change. We were looking forward to our dinner and to catching up on all the news from Ardfern. 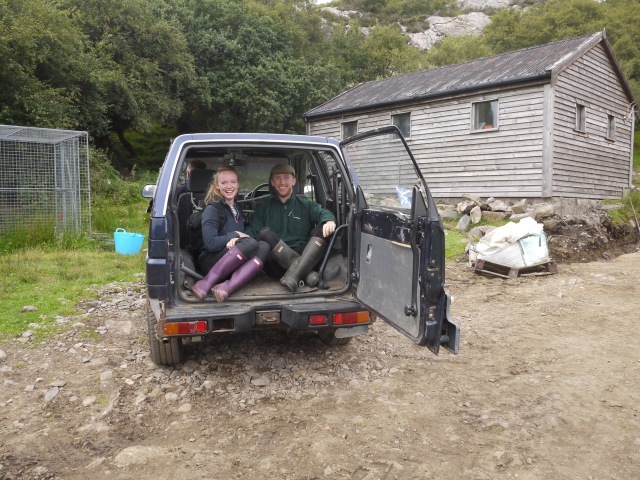 Packed in the Back

Saturday (yesterday) started off grey and damp, not good. There was so much stuff that MV Aspire got held up, although there were other reasons!!!!!!! 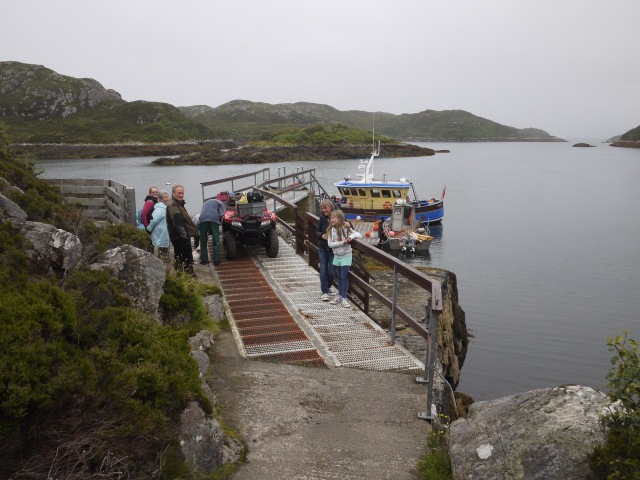 The new guys arrived, three runs to the cottages, then it started to get wet, very wet but there was a promise of better weather ahead. John and Katherine were back, just like Jim and Helen after about ten years with one daughter in tow. 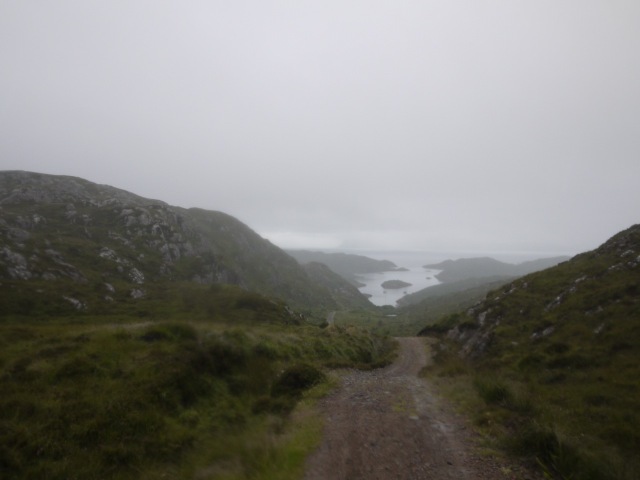 In the middle of it all the rain came and for a couple of hours it was really miserable. But by 1pm it was clearing and we could get going with the new lean to onto the bothy. 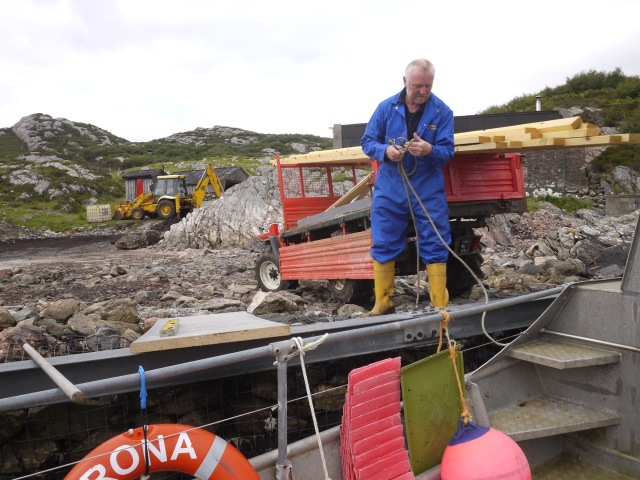 Late afternoon and the tide enabled us to unload the boat which had been the point of delivery for MV Aspires load. 4×2, doors and windows were unloaded and serious cementing started. We usually have two cement mixers and it was only when I started to mix that I thought, what if this one breaks. Well, after about 15 mixes in the belt started to get noisy, it was breaking up. I trimmed it but what I did not see was that the pulley on the motor had come loose and of course the belt then came loose too and snapped. Disaster!!

With 3 to 5 batches left to do (and it was 6pm on Saturday night) Ian never hesitated, we got going and hand batched the last 5, the last one was the worst but we got it done and I don’t think a tin of lager ever tasted so good. 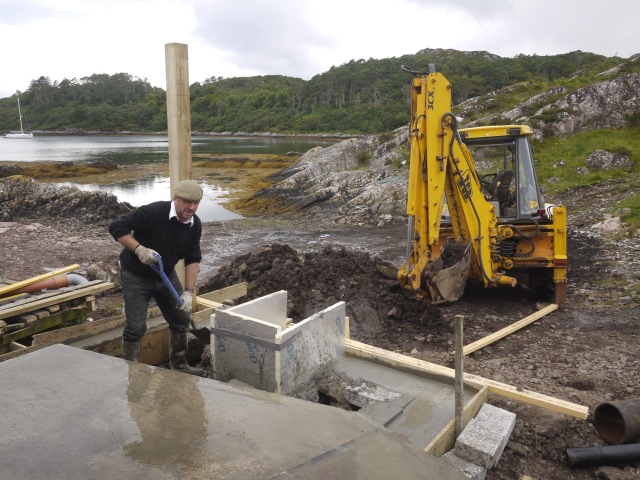 I Did my Bit

It had been all go, thankfully it was pretty quiet with only three yachts in and John had been roped in on his holidays for a full Rona shift, his help was much appreciated and we had minimum disturbance. 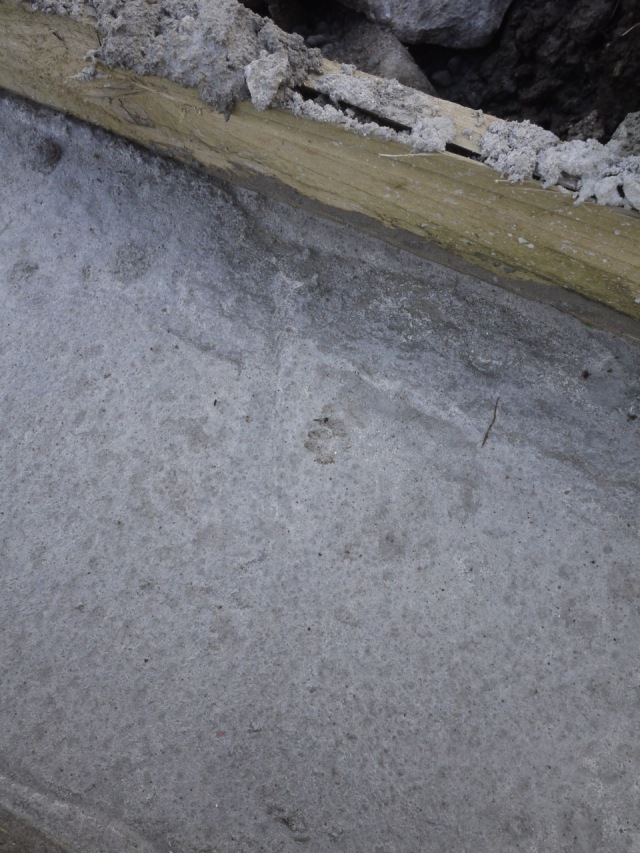 This morning, Ian pointed out the tracks in the concrete, seems we had a visitor last night, I am sure it is a mink and as I did not give Paul all my traps I set one and we will see. With 11 hens now we really don’t need a mink attack.