We have been busy, it is almost a month since the last post, so much has happened since then but as usual it is all about the weather. So the update briefly is that winter finished Friday afternoon last week, a wee blip on Saturday then sunshine, very warm and heat, lots of heat since.

So long since the last blog that Steve (a blog follower) and Fiona rocked up on Cat’ Orca to see what was happening.

They arrived midday, picked up the mooring and Steve was pressed into work when he stepped ashore.

Got the boat in at the weekend, no point in it being in any earlier as we were away for two weeks.

But as usual there were issues with the engines, just as well Steve rocked up because I had given up after a very hot day yesterday over the two engines. They are going well now, as well as two 10+ year old outboards with 1000 hours each on them can.

It was good to be back on the sea and am looking forward to a few more trips once we get the port engine running just a little bit better. 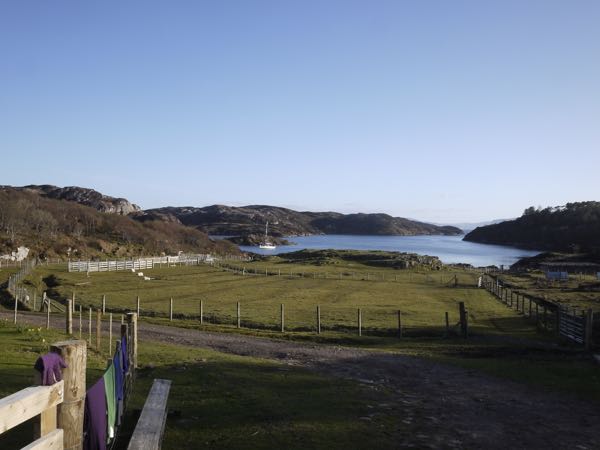 Friday night Shieldaig yacht “Sula” arrived with the 8 crew aboard, they had had a lively week and were out of wine, steak and burgers.

We were happy to oblige and had our first major sale of the year.

To-day, I am reliably told it is 29 degrees down at sea level, I’m not surprised, seldom have we felt the heat as much in May. There are now a few yachts and kayakers appearing, we had a yacht in Sunday, two so far tonight and a few sails out in the two Sounds.

Work on Rona, lambing, getting ready for the season has all gone too fast and there are still things to do but we will get there. We were in Europe on a road trip up to Denmark over a couple of weeks and Ali and Clive held the fort very well in our absence. The list of work was more than completed. Even with the distraction of Leicester winning the cup (Clives a Fan, I think).

1 Response to 29 Degrees – No Kidding