A New Year, Dry at Last.

Our sympathy lies with the folk around the country suffering the floods of the past few weeks. We are well used to it for sure out here and on Skye, however, it is strange to see so much rain falling in parts of the country which do not normally get that amount. Out here and in the West in general, anything that has been flooded already had been so it does not affect us so much, but in conditions like the East has had we can suffer to. (the road behind the house, the sheep, deer) But, it is good to get a wee break from it for sure. 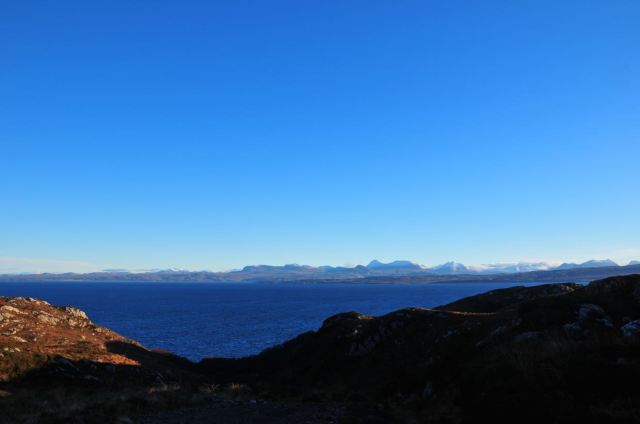 The View To The East Saturday Last.

I cannot remember when the weather went into the East, I think just after the New Year.

Work goes on and with a full admin’ tray to sort it was a bit of a juggle to stay inside and think about what we should be doing outside. We had planned for rain, but it was dry. So I thought I would carry on and finish re-building the track behind the house.

Another Sunset On The Way.

That is when the problems started. I had just finished the clear up of where the rain had washed away the track when I had a rear puncture on the digger. Facing uphill with a flat rear was no fun as I had to use the buckets to get back down and off the road. No spare so nothing for it but to get it off and my first inclination was to send it off via MV Aspire.

Too Tight To Move

I do not know how they put on these wheel nuts but after trying to break the wrench I got the blow torch and gave it some heat, it moved the wheel nuts then. First mountain out of the way. Next I thought I would give it a wee push with the bucket and lo and behold the tyre came off the rim. I called MacRaes and asked for two tubes, last time I did this it was a disaster, I burst the first new tube putting it on (the tyre rim came in too tight and sliced the valve off, £54 a pop!!!) so I wanted to have a spare just in case. 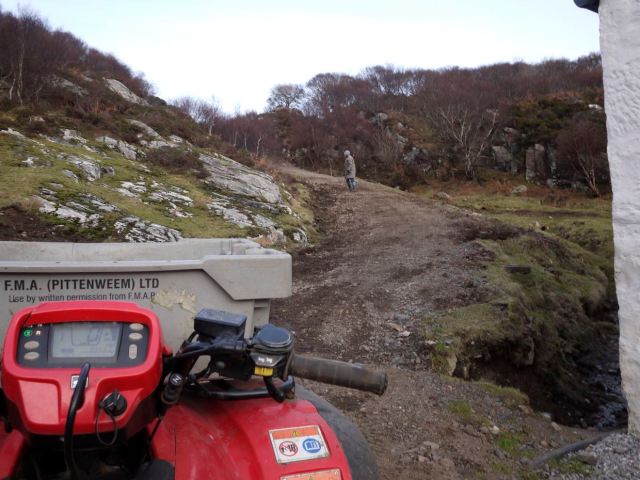 Back to The Rake

With good dry days we decided to do a bit of ‘Calum the Road’ and get the rake, wheelbarrow and shovels out. We made quite a good job, probably better than the digger but every time I work on the road like this I think of Calum the road down at Arinish. Putting in the hours, it is a hard enough day but a job like this has a lot of self satisfaction about it. A lot of people did not get Calum the Road, but I get him every time I pick up the pick, shovel and wheelbarrow on Rona’s road. Let us hope the rain gives it some time to settle.

MV Aspire On Route to London

MV Aspire was out Friday with stores and the new tubes. Some Christmas mail too which was welcome. They were off next day to London and will be back next weekend, sounds like fun.

With a we bit of help from the digger I got the wheel organised and the tube in. A call to Hugh for advice which was followed not too the letter, but I was lucky.  I nearly did exactly the same as last time and sheared the valve. Luckily this tyre is softer than the one on the last JCB. In fact I think it is too soft for Rona work. 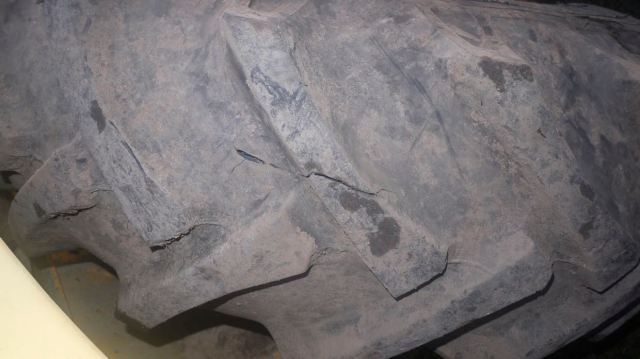 I did not see the cut in the tyre until I blew it up (it is less than three months old, with no work on it, so now I have to take it off again and put a patch inside. That will happen next week after a visit to see Alistair in Dingwall Tyres for some patches. 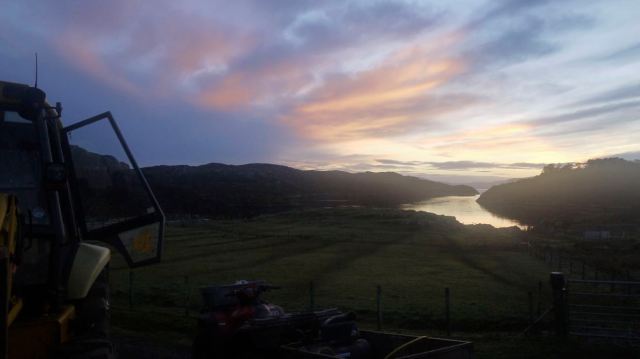 At last light I finally got it all back to normal and moved the digger from the ornament it was in front of the house to the new road.

In the rush to get everything done I had left the garage open, when I arrived up top at the shed the sheep with their sheep nut sensory noses did not take long to find the open bag and trash the shed as a thank you, second time this week.

It Seems to Be Holding

Next day I flattened the pile of ground and boulders on the new road to the house site, then since it was such a sunny (frosty) day I decided to do a bit on the outboards. 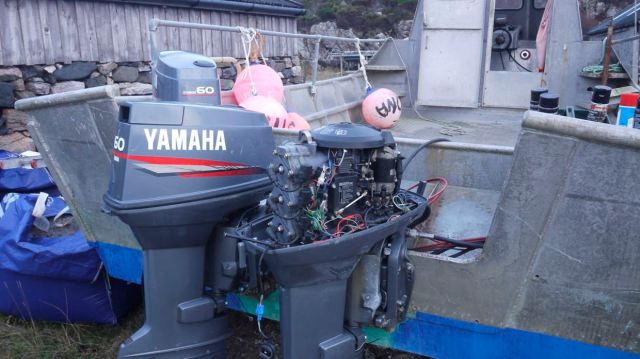 It seemed like a good idea but it was Baltic. I got the new thermostat fitted and ran up the other engine, so not too bad an afternoon. My feet were like lumps of lead though. 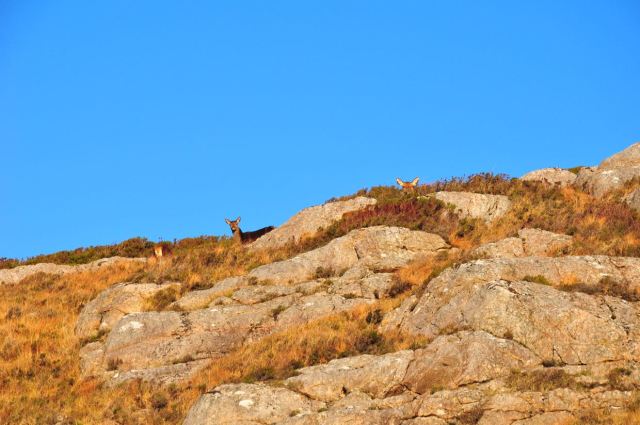 On Route To Dry Harbour

Saturday it was over to Dry Harbour to check the traps, put a washing on in Escape cottage and check the generator. On the way over the sun was up, it was warm and the hinds were certainly enjoying a bit of vitamin D. 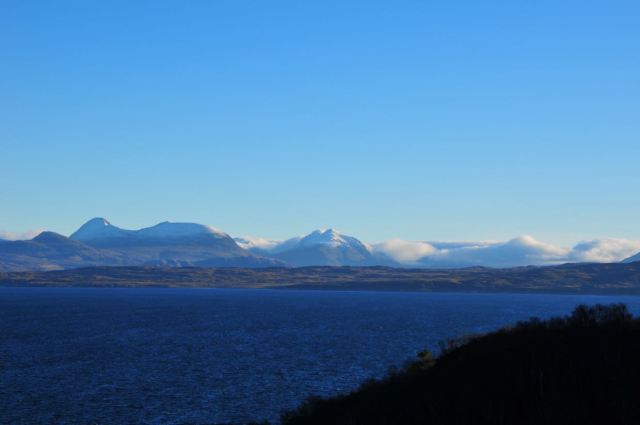 The views at this time with clear air are fantastic on days like this. We could see right up to the North of Scotland. 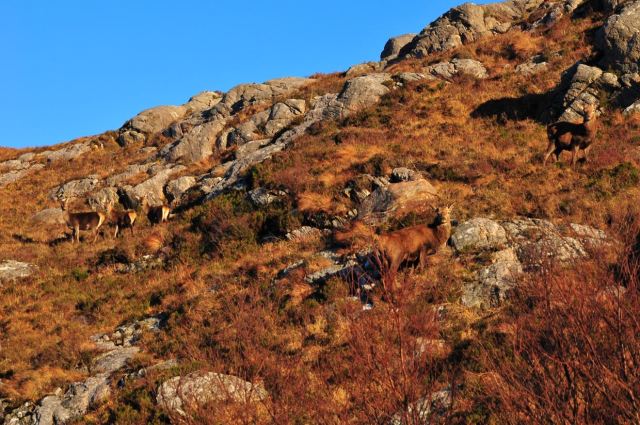 More Deer At The Side of the Track

Even the deer were taking a bath, we passed another family group beside the track and the two young stags had been wallowing, they were dripping peat. 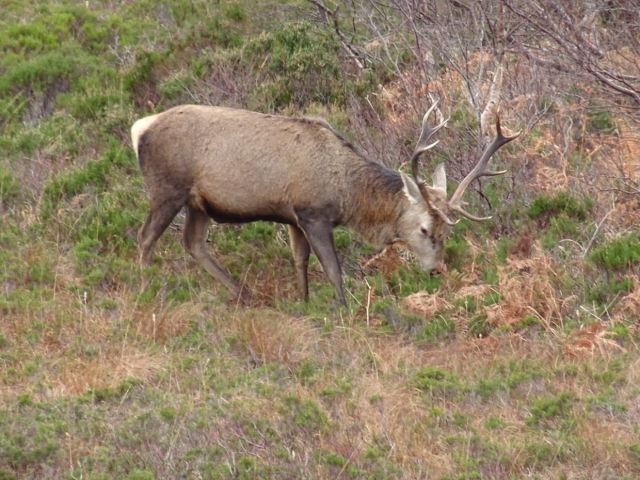 I took a wander down South for a look around, just to check the trap and to get a look at deer numbers. I was disappointed to see few hinds but there were quite a party of stags right at the South end, good to see and we hope they stick around for the season. This young Royal will make a good stag next year for sure.

On the back of the John Muir Trust debacle, I was passing this trunk in the bog and thought “here is a part of the ‘ancient’ forest”, they say it is Scots Pine, a fair guess. There are quite a few in this area and some ‘bogwood’ too which can be lifted out. I always wanted to send a piece of this away for analysis just to see how old it is. Never got round to it. But in the present debate about regeneration of Scotland’s forests I often wonder what the forest zealots want. These tree  stumps are hundreds if not thousands of years old, different climate, different land use and like it or not, the world has moved on from dense forests of Scots pine with wolves and bears roaming about. Oh, the other thing, trees take a long time to grow, so do not expect a quick fix Mr John Muir Trust, think about it!! 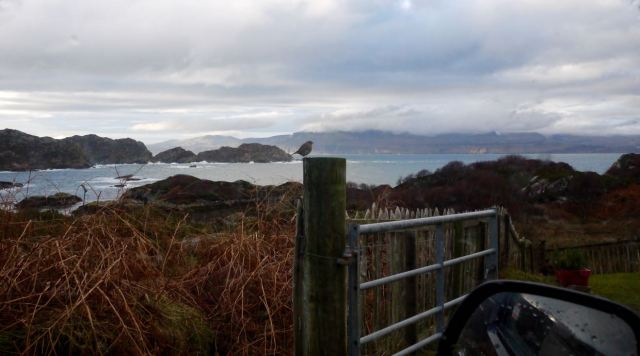 To-day, the highlight was the huge swell coming down from Iceland, the noise at Dry Harbour was quite deafening, the Old Man of Storr was shrouded in mist and I wished I had the ‘big’ camera for this Robin. But it turned out good enough. This fellow is quite cheeky and like the rest of the Robin’s at Dry Harbour, he has no fear.

Fingers crossed for tomorrow, Monday! We are hoping to get off, L’s first time off since the 24th November me the second week in December. So despite thinking we should have Cabin Fever, we are actually quite happy to be missing all the colds and plagues that were  doing the rounds locally!!!!!! I’m sure we will get something next week.

1 Response to A New Year, Dry at Last.