On a grey morning last Sunday I took the final trip out on the MV Rona. My last chance for a spy along the shore to see if any of the stags were hanging about. But, it was dour morning and so I gave the engines a good blast then made for the shore to catch the tide.

Before hitting the beach I took a look up at the gut East of the house (we found a dead Minke whale in there one October years ago, just before we put the boat out. Which was good, otherwise I would have had a pretty smelly Big Harbour over the winter. We towed it away!!!) Pictures to follow at a later date. As it was the Aspens fairly brightened up a bleak morning. 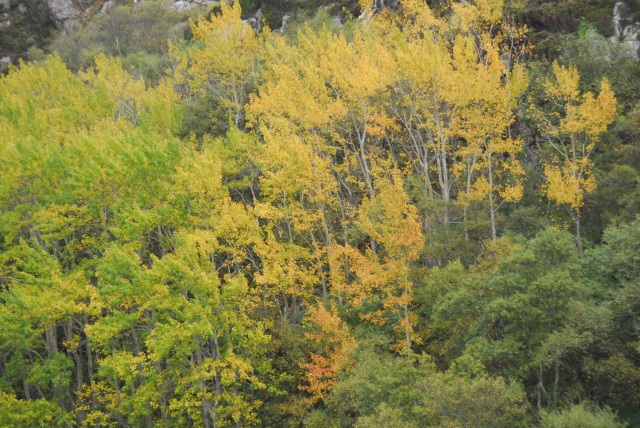 The new (to us) JCB is much kinder than the old one, much smoother, less jerky and less likelihood to smash a window or something. 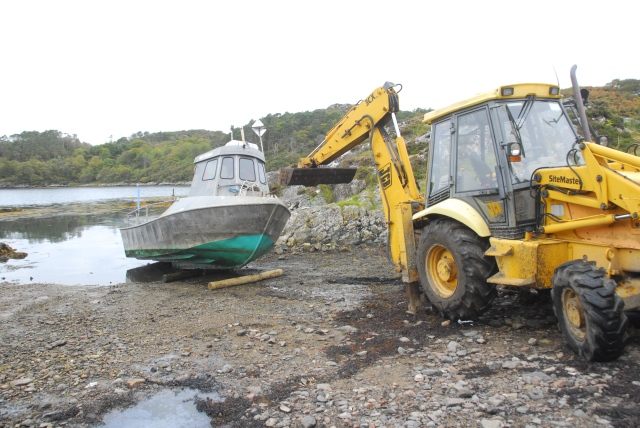 This year I tried to get the boat up on rollers but the weight smashed one of them so I had to resort to the old ‘raft’.

Back to The Old

In the middle of it all MV Spindrift appeared on its final day out of the season, the new owners first time on Rona. They vacated the pontoon just as Kenny arrived with a walking group from the Torridion Walking Festival.

It was good to have a few visitors despite not getting my jobs done for the day, Gill our architect was coming on Monday to see the house site and position it to suit, so there was prep’ to do for that. I abandoned the boat for later in the week. Aware that the forecast was taking a dip.

Gill had a better trip over this time, the wind quite light from the South, but it absolutely poured until she got back on the boat, then it was quite a nice day, typical.

We noticed looking out the window at breakfast that one of the Valtos sheep we got lately had a limp so they were next for an inspection and dose. Their feet were pretty messy compared to the Rona sheep. I guess the rocks do a good pedicure job on their feet out here. The limper was quickly sorted out and her ‘claws’ removed. They are still quite skittish but are coming round, they are soon to go to the Tup.

‘Trying’ To Sort out The Septic Tank.

Next on the list, back to the septic tank. There is an  ‘odour’ which is quite annoying after ‘fixing’ it. But a quick call to Hugh and with his advice I tried something else, it seems to help but L was not convinced. I guess we may get a new one further away from the house when we build the new house that will do both houses, we will see. 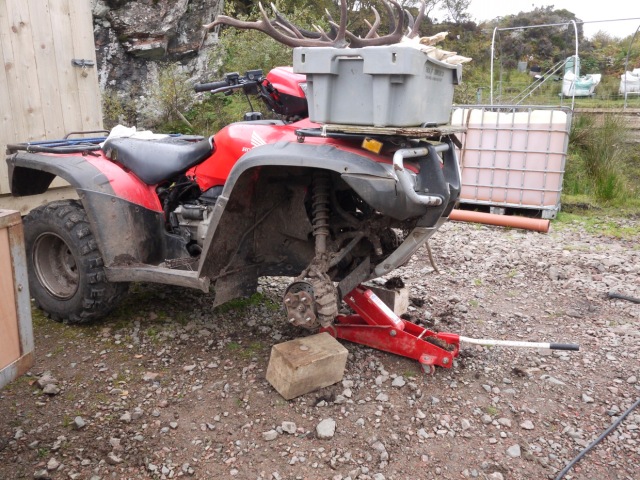 There will be three

The boat was slipping down the list and in among it I got the first puncture for a while, I whipped the wheels off so that Kevin could take them over to MacRaes for replacement. A thought ran through my head, punctures always come in threes around here. Sure enough next day, the jeep rear was flat. The stones are pretty sharp on the road I guess there must be one like a knife out there.

I got the jeep fixed temporarily but will have to change the tyre this week for our caretakers coming to look after Rona whilst we are away. These cord plugs are a Godsend out here. They have got me mobile more times than I care to remember, highly recommended. I guess you can get them on the ‘net but we got them from ‘Dingwall Tyres’.

Once I got these ’emergencies’ out of the way I then got the boat up on legs and level, ready for some pre-winter maintenance. Also, the forecast was not good with the first gales of the winter arriving next day. So off I went and tied as much down as I could.

Next day it was a house day catching up on paperwork, a horrible wet and windy day, not gale force but strong enough. However during the night it really kicked off and there were some serious ‘wumffs’ not a lot of sleep. First thing Thursday a quick look around and the first thing I saw was the JCB had lost its number plate, nothing serious, just nature clawing away at us. Up to check the genny in case of lightening strikes and I saw why the TV had been giving us a problem the previous evening.

Although not serious it did take a while to put back and I lost an afternoon messing about with the new dish which on hindsight was a bit of a mistake getting a solid one. I should have stuck with the mini mesh dish. 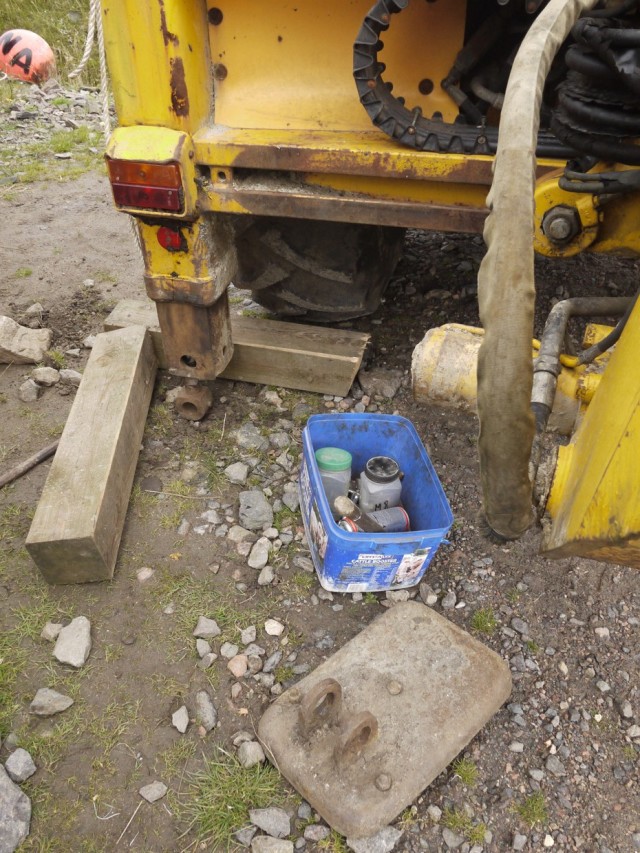 Back down to try and finish setting up the boast and fixing the second leg when puncture no’ 3 happened. Well not quite a puncture but enough to throw the plans out the window. I caught it on time as it could have gone the way of the last one when the pin came out of the pads. Then the ram dragged along the ground and cost quite a bit to ‘unbend’. I fixed this next day and eventually got under the boat for a proper look.

The boat had been quite slow lately and here is the reason. I’ve never seen such growth in such a short time. I had the boat out of the water for a clean around about 6 weeks back, maybe less. So I was quite surprised to be faced with this, although I did not anti foul it last winter or spring. The paint is obviously not working. We should rectify that soon.

Friday was a grey day, more wind and rain but we managed to dodge the showers and get a few things out of the way.

Bluebeard and his pal Mel were heading off after a great fortnight of peace and quiet. Well apart from one week of roaring stags outside their house. Quite a thought to be heading back South but their fortnights get away from it all (internet, phones, cars, people, etc etc) should revive them and set them up for the winter.

Now here’s a story: Saturday afternoon I saw the lifeboat heading straight for our harbour, but then it disappeared. I shouted to L to switch on the VHF to see what was happening. Turned out a walker, staying at the Raasay bothy had gone onto Eilean Tighe first thing and his dog (still on the lead) had taken off after sheep, last seen chasing a sheep to the cliffs. So for the next two hours we were hearing about attempts to find the dog. I was going South looking for deer that afternoon so I headed down to An Tempuil right at the bottom of Rona looking over Eilean Tighe, earlier. All I could see when I got there were 7 sheep staring uphill, they may have been looking at some of the crew of the lifeboat who were ashore looking for the dog, either that or the missing dog. It turned out the dog had been missing for 5/6 hours. The owner had gone back to the bothy for his gear once the dog disappeared and returned, then was cut off by the tide. The dog still on the loose.

We got a windy phonecall from the owner asking if we had ‘spied’ the dog and where? It was quite dark by the time I got the call (although it was dark when the showers came through during the day). He said he was going to spend the night on the Island, looking out the window first thing this morning I think that would have been a grim night out.

Last thing we heard, the lifeboat left the scene with the owner trying to find his dog, goodness knows how the sheep are faring.

Never a dull moment out here.

Update; Dog still missing, owners phone battery dead. Just had a call from family in Manchester asking if I knew anything!!!!! Oh, and absolutely pouring from the heavens.