At long last warm, clear, dry, bright days and it is the middle of October, now we have the summer we never had. Quite surreal and no visitors to boot. In weather like this we would expect yachts coming and going but nothing, it is quite an empty sea out there. We can get on with the work though, looking forward to our holidays and making plans for the winter. Since the last post and the rut (ongoing) it has been a busy place.

Even after the weeks stalking I like to keep an eye on the stags movements , every morning and evening I’ll head out just to see who is about and what they are up to, Sunday  night found me up at the trig point with perfect weather for spying the length of the Island, I was not disappointed. There was plenty activity as the deer took advantage of the late warm sunshine, keeping to the higher ground. Monday morning was not so good when I caught a stone hidden in the rushes and flipped the bike, right into a puddle, here we are righted but wondering how I did that? 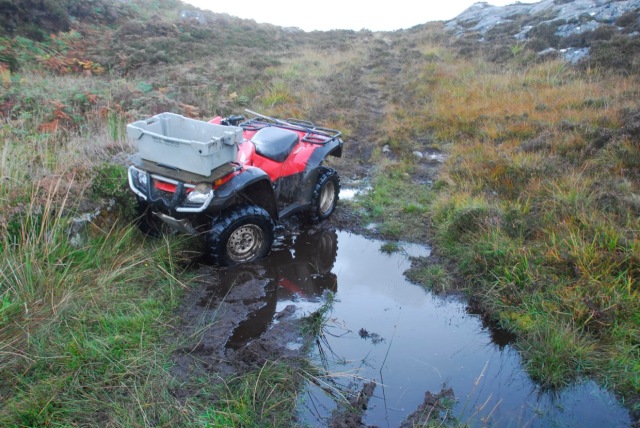 How did that happen.

I would have taken a picture with it on its side but the petrol was pouring out of the tank, I’ll watch out next time. 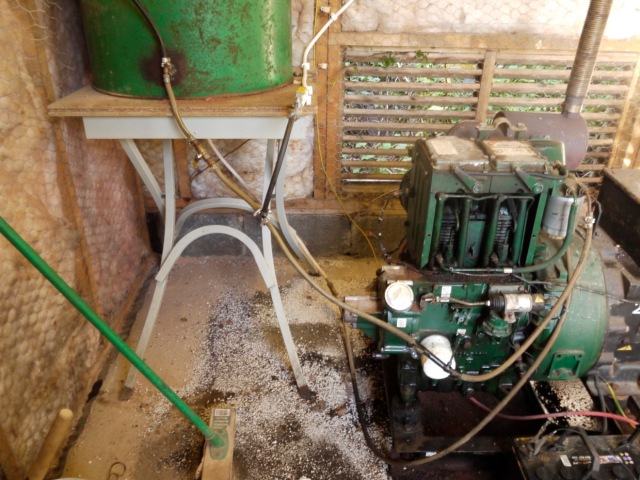 There are a lot of loose ends to finish, the fuel in the Dry Harbour genny shed was one of them, but I had to wait until Mr Ebay sent the jubilee clips, ten minutes and the job was done and that was on the way home after flipping the bike. Another tick off the list.

The ‘In House’ architect.

L got her drawing board out to help Gill at Rural designs put together the plan for the new house. Quite an exciting time and now with a little less disturbance we can put our minds to the new development.

Lots to get on with and get organised, so here we are last Tuesday last heading to Portree to get to the bank, shopping and most important the architect.

It was a beautiful morning and very calm, great weather where you do not have to worry about the sea state.

After a very relaxed day out in Portree I headed back, the sun streaming into the cabin almost too hot, incredible.

Back to the day job next day and my usual hour in the morning, hour in the evening looking out for deer, these guys were unconcerned about the targets.

We had not managed to sell some of our sheep this year, the wedders(or wether). But these are at there best just now so we have decided to put two of them in the freezer. We will just have to use them ourselves,  we cannot sell the meat as the sheep would have to go to the slaughterhouse first, go through the proper channels!! The cost does not justify the end. These are the rules and regulations which makes it not possible for us to butcher them and sell the meat here . This is quite strange because we can cull the deer and butcher them for selling but not the sheep, they live almost side by side. To send them all the way to the local abattoir (Dingwall) then back to Rona is a bit mad, so mid week I was in the larder doing a bit of butchering, needs must as the weather was very good and I’d rather be outside for sure. 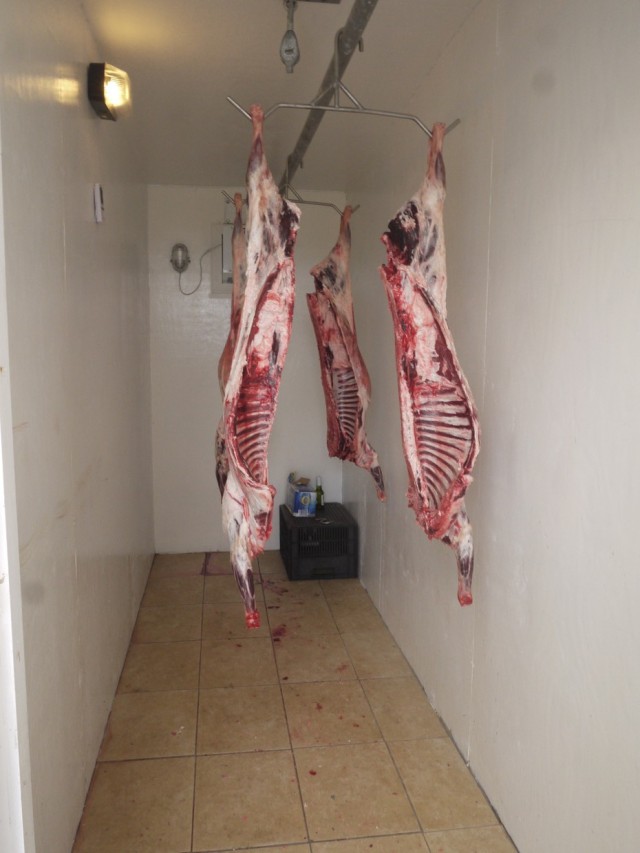 The weather being so good it was not really a surprise to see a yacht sailing into the harbour, Yacht Full Moon arrived Thursday a last outing before going to the boat yard, they probably enjoyed two of the best days of the year.

Friday we had a go at clearing the trees around the house site, just a few to get a better perspective of the area. As it turned out it made such a difference to see the area cleared and we could see how the building would fit perfectly into the hillside. And as a bonus the winter stock of firewood is getting bigger. 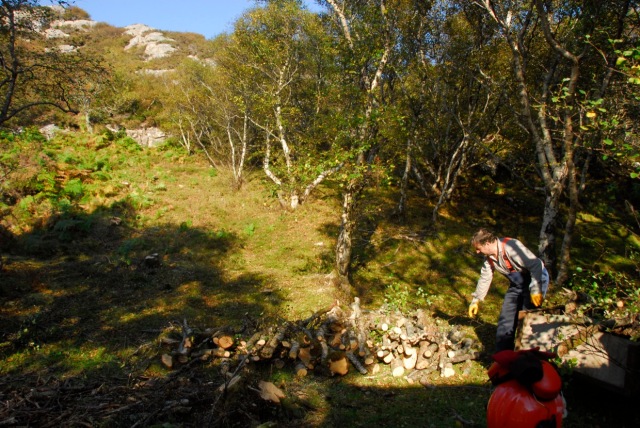 Lee and Mel arrived in the middle of it and were very impressed with the site, it was catching the late sun and very warm in the late afternoon. 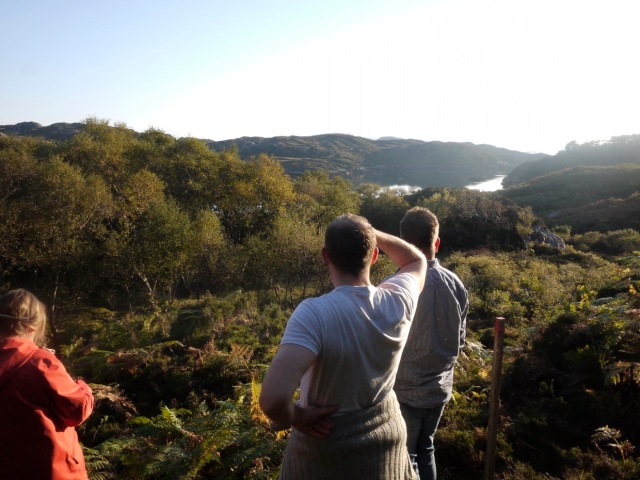 The guys were over to have dinner with us and were very keen to see how to dress a lobster, always keen to eat lobster myself and L were very happy to oblige. 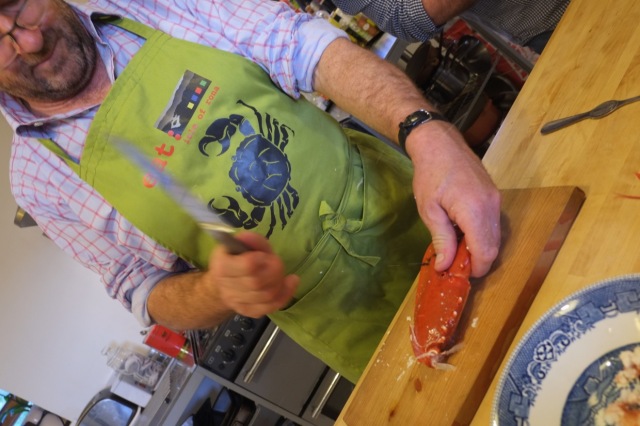 Of course anyone invited to dinner has to muck in and mayonnaise is always the one we like to get our guests to attempt, this time it came together very quickly. Our new Rona aprons had arrived (ideal Xmas presents) they work very well with bits of lobster flying around.

With a Little Help From My Friends

The evenings entertainment went well and we had a relatively early night which was good because first thing it was very cold and slightly foggy, I was keen to get out to check on the deer.

I was hoping to catch a stag in the mist but no one was obliging, however up at the higher hills around Dry Harbour I was pleased to see last years Master Stag back on the beat roaring for Rona. 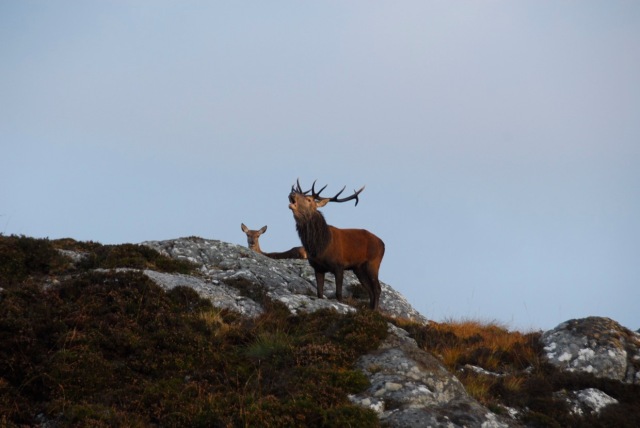 As it is getting near the end of the stag season I’ll not bother too much this week going out early and seeing the stag above will just about be my last early morning outing.

Although if the light is good you never know, there is always a picture to take.

Especially if it is this clear.

Going For a Paddle

The guys in the cottages have their kayak with them, easy to transport these blow up kayaks are very popular, this one looks pretty robust, some of the plastic ones have been prone to bursting with too many sharp edges and even in hot sunshine, they expand too much. 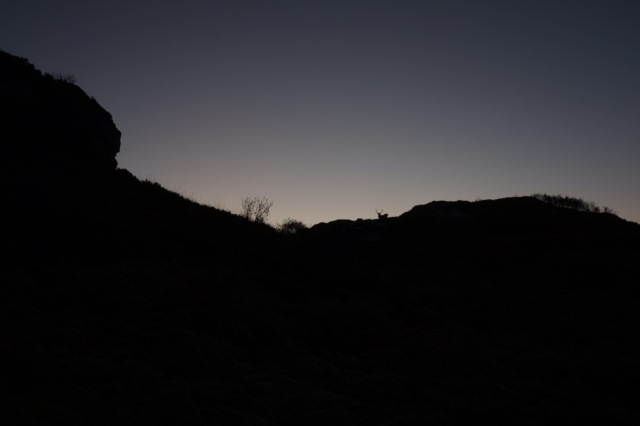 Although I’m not going out now to look for stags the bay around Big Harbour has been resonating to the sound of three stags at different points roaring across the bay at each other. Which makes it easier to see them on the skyline, especially if they tell you where they are.

To end a wonderful week the cold frosty nights with promise of the Northern Lights have been very welcome, a real sense of a proper Autumn after an improper summer. The weekend had started ok this Saturday with no changeover it was a relaxed day. But Sunday it was pretty grey. MV Spindrift was in for a visit and MV Seaflower. So it was busy enough and the Vodafone mast was down (yet again) so no phones.

Monday morning it is all go, MV Aspire is coming with stores and the architect for a look at the site and just on cue the rain has started, great!!