I was lying in bed this morning and listening to ‘Out Of Doors’   Radio Scotland, with Mark Stephen and Euan MacIlwraith. Always worth a listen in on Saturday morning. To-day it was a Land Reform special (from Skye) which is quite a contentious issue at the moment in Scotland. As an employee of a foreign owned Island/Estate, I thought I’ll just lie there and listen (until 8am, first long lie for a week!). I did not feel too guilty as I kind of thought it was going to be a very long day. Very interesting it was and still available on BBC iPlayer.

The thing is, living here in the real world of private ownership of a part of Scotland’s land, I just wonder how many people actually appreciate just how much it costs to live and look after one of  the remoter parts of Scotland and on cue here we have to-day’s exercise on the viability of sustaining a community (albeit 2)on  Rona.

It started with the cottage changeover. We have, as many know, three holiday cottages, renovated at quite an expense to then go towards making the Island financially sustainable.

MV Aspire arrived on time as usual after a calm sail up from Portree. Two on, two off (plus dog Poppy). It would be best if we could have three lots of visitors to the cottages every week but unlike Skye’s bonanza year we are having a poor year of cottage guests. We got our return visitors David and Sharon into Escape, went through the mail, had lunch then got prepared for the next shift.

Thinking about the radio programme, I commented to L that we had not heard from folk who work on, or are involved with, privately owned Estates apart from Moray Estates’ Manager. I had worked on that Estate many years ago as a contractor. I always found it to be very pro-active with lots of projects but a far different area to Rona with much more of a productive asset. 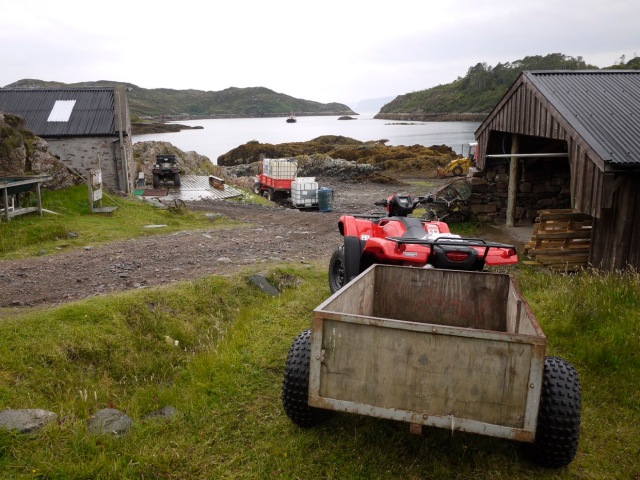 Landing Craft ‘Spanish John II’ had been booked to take the annual fuel, new JCB, building and fencing materials, quite an add on expense to the Island (or any Island’s economy). We had found a cracking JCB to replace the ‘bargain’ buy we got from Hugh MacKay Plant Hire over 8 years ago. So that prompted the landing craft in the first place. 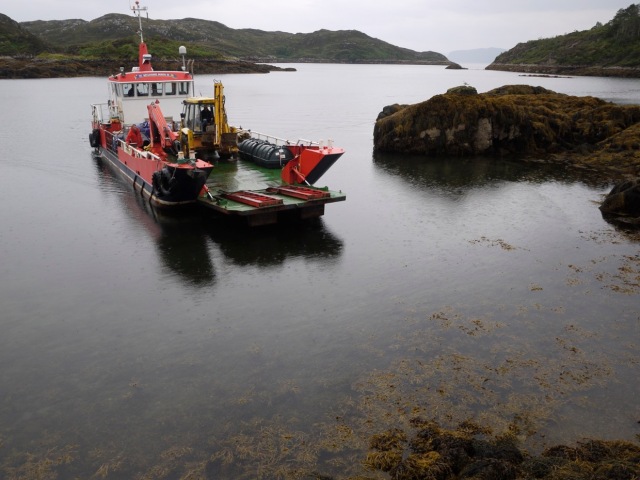 To maximise the space we always stock up on things for Rona so there was quite a load, more than the usual fuel which was almost half the price of the last delivery by the landing craft. 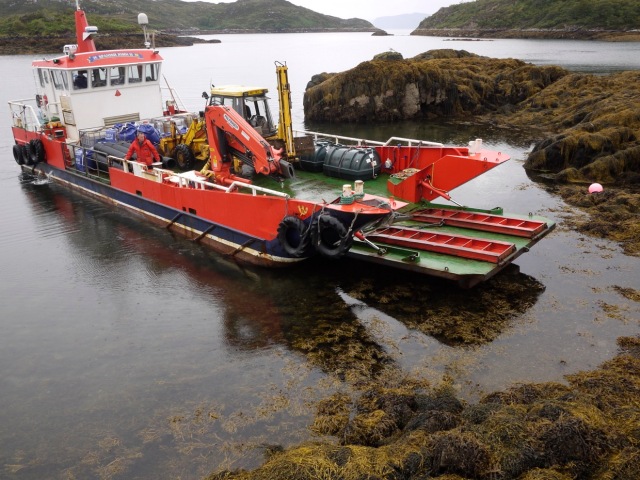 Feeling The Way In

Of course it was raining, but you cannot pick the weather, just the tide. Greg the Skipper had been a bit later than he expected but the tide was perfect, Hugh had come over for the day to give a welcome bit of support. His old (and our) JCB was waiting for the off but we soon had to resume its service to save a bit of time. 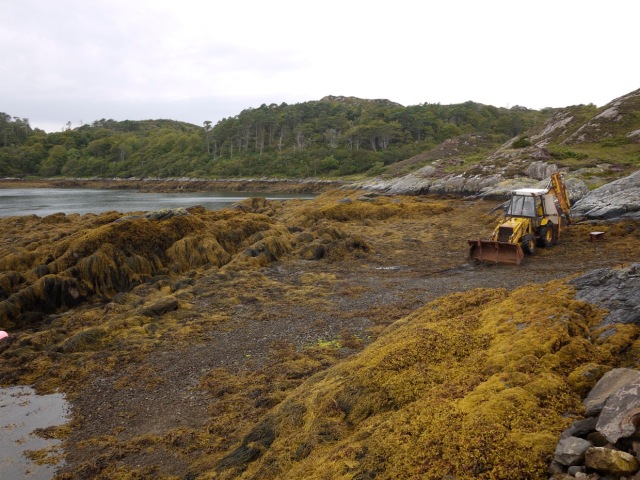 Waiting For The Ferry

I did not have enough containers for the fuel so there was a bit of frantic activity finding homes for it all.

Once the boat arrives we never stop and Hugh took off the load whilst I transferred fuel. 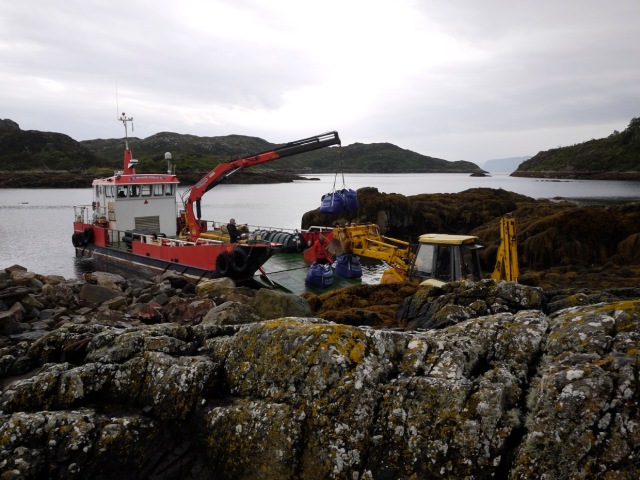 All too soon the shore started to fill up and we were running out of space.

Then It Really Rained

It was grey but dry but in the middle of it all the rain came on proper. But we hardly noticed as we were chasing the incoming tide. 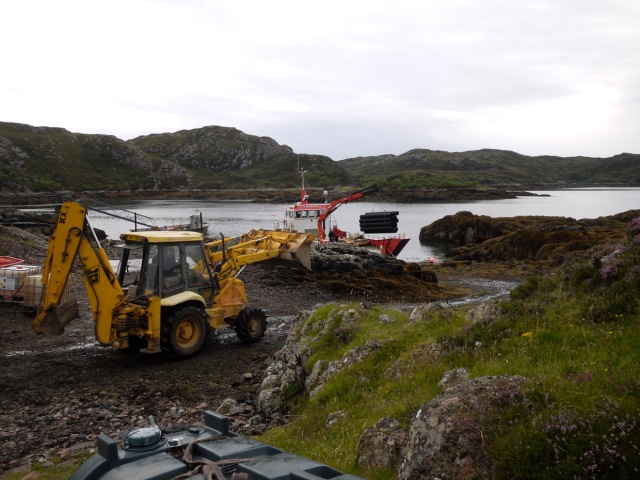 With two JCBs we were winning, and all of a sudden the landing craft was empty and I put the old JCB onboard. We had put it on Gum tree for sale the previous week and the phone never stopped, I could have sold twenty old diggers, there must be a business out there for very old diggers (if you can find them). As it was it was heading now to Inverness. 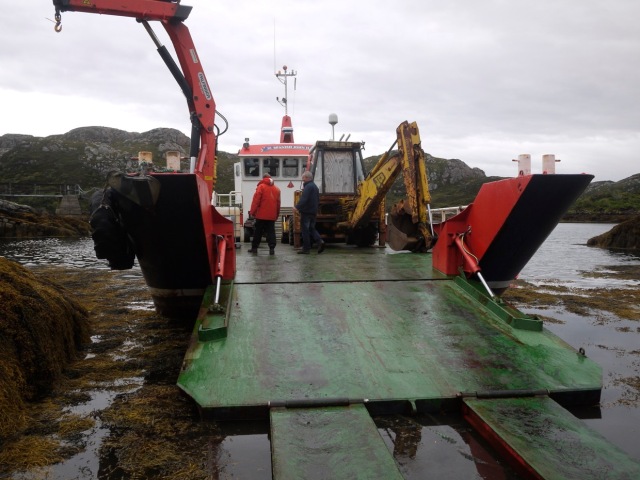 Almost ready for the off.

All that was left to do was empty a couple of IBCs of fuel. With the help of the electric and petrol pump that took half the normal time and Greg was loaded and away. Despite dire weather forecasts the wind stayed away and it was late in the evening before the forecast gales came.

Heading back to Mallaig

The landing craft had a bumpier ride home, stopping in Kyle to unload the digger and an old ATV motorbike.

The ‘Spanish John II’ left at 4pm, I had a quick cup of tea but I still had to go some as the tide was coming in fast and the fuel was still on the shore. Three hours later I got home to the Lodge for a very welcome beer.

Once the first beer had gone down the second can was much more relaxed and we had a chat about the cost of to-day’s exercise. Probably £20,000, ouch. But very welcome to support the community of two on Rona!! Which brings me back to the costs involved in owning ‘the land’. Even if you do nothing with it, it will still cost. However we also reflected on the 200 people who lived here pre-1920/30s who left because of very little outside support and a desire to have a better life, how things have changed

Next week we have a couple coming to give us a hand, we look forward to hearing how they see the future of Rona.