Well it has been a weird sort of day. I had intended settling down at 3pm this afternoon, L was wanting to watch the Harry Potter film on TV so I saw a chance to make my Rona Stamp Blog and get it going. BUT things are never that simple on Rona.

After lunch we went to Dry Harbour to sort out the new painted wall in Escape cottage, hang pictures, check traps, gennys etc. etc! As we went over the hill I looked in my mirror (of the jeep) and surveyed as you do, the Bay. There was one boat in, a Cat’ in the best position. When we came back it had disappeared. Now that in itself is not a problem but we had seen the crew going for a walk 3 hours ago!! So we assumed no one on board!! where was it.

It was snuck in by the shore and we could not see it from where we had seen it before, clearly dragging its anchor. I headed back quickly to Dry Harbour in the hope of finding the crew, no sign. I then called the Base up North and went South. When I got back L was at the door they the crew were at the lighthouse and ‘running ‘ back to Big Harbour. In the melee MV Fynne Affair arrived and with his help we had had a look at the Cat’ and decided best to leave it until the owners arrived, the tide was dropping but if I went a got some of the crew then……….by the time I arrived back with Ash there were another 3 yachts in on the area he had been anchored, having arrived one after the other.

I headed back to Dry Harbour for a second time and picked up the owners son Ash North of Dry Harbour and made a dash for home, we boarded the Cat’ and lifted the anchor and re-anchored it in the West pool of the harbour, that was too close for comfort but I suspect not enough chain out for the force 5/6 forecast!!! 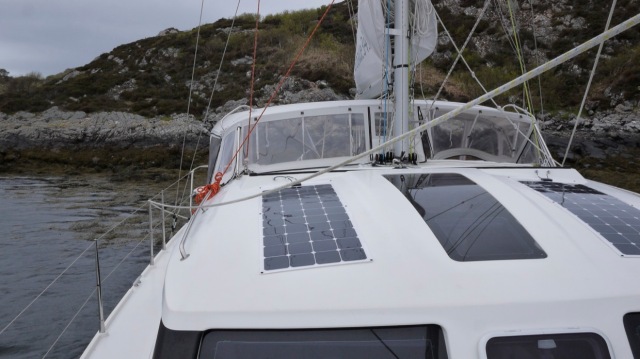 Getting Too Close, nearly on the shore.

I got him sorted then went round all the yachts lecturing them on having 30 m of chain out (what do I know I have never anchored a Yacht, but I know what I have seen over the last 13 years!!!!!!! 30 metres of anchor chain in any strong wind is a given) and the last I saw was all crews letting out more chain!!

Safely Anchored, But Problems Ahead.

In the meantime a kayaker had arrived at the bunkhouse, now they never cease to amaze me but to-day it was 4 to 5!!! As it happens he was from Germany, not by kayak, but put in at Sconser and had travelled up yesterday to Brochel. To-day his mission was Rona, and a mission it was. He was Frank from Cologne, keen paddler. Looking to book the bothy for one if not two nights. As I was chatting with him another yacht came in(you can see it left of the cat’) and promptly went onto the second (last) reef coming into the harbour. Despite our radio call he ploughed on (I must mark this reef). With a big bump he launched his yacht onto the reef. I grabbed Frank and we took off out to try to tow him off. 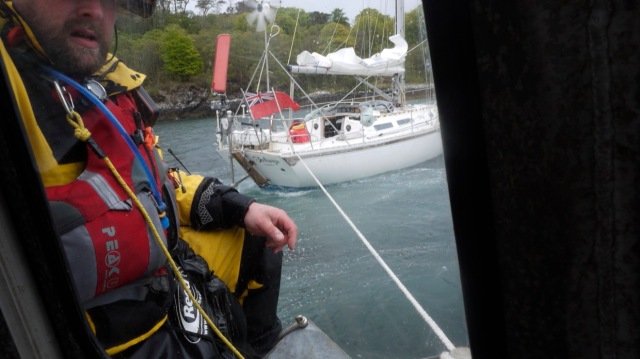 Poor Frank the Kayaker must have wondered what the hell was going on. However after a second tug from a different direction we got him off. Always a predicament as we have been told not to help!!! As we may be sued for damage which is incredibly sad. Well this yacht is now safely anchored and the only thing that is damaged is the skippers pride.

Now the Skipper of this yacht has been in here countless times but just goes to show, a moments distraction and it all goes to pot.

Just another Saturday on Rona.