I don’t have a photo to prove it but last time I looked the hills were white with snow around here and it is almost June!!! To-day Thursday it is back to the South Westerly air flow and rain, but still cold. So maybe tomorrow when we can see the hills again they will still be white, I will not be surprised.

It has been a few days since the last blog. We were away and the week before we left was pretty mad, with long days, bad weather and jobs mounting before our departure. 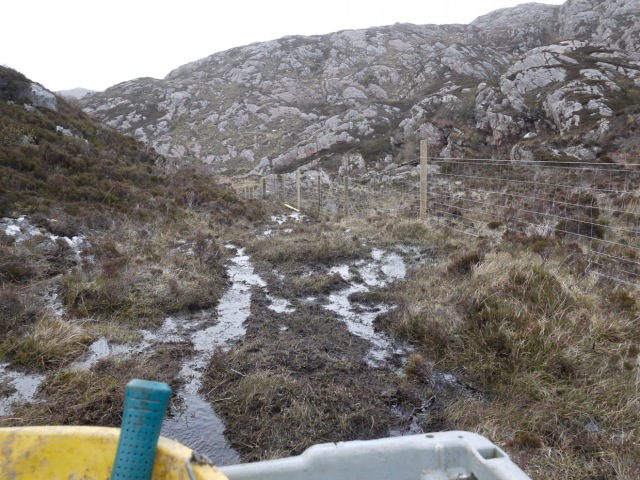 The grass is not growing, the sheep park is bare and we needed to let the sheep out, but the fence cutting across the Island was not finished, nothing for it but to head out in dreadful weather to try and complete it. The more I went up and down the fence line the more it resembled the Somme. But by Tuesday 12th it was enough to deter the sheep (fingers crossed) although the two white dots in the middle of the pictures are escapees that were on the other side for a while.

The last stretch is always the worst. But the posts were easier to put in down off the rock. 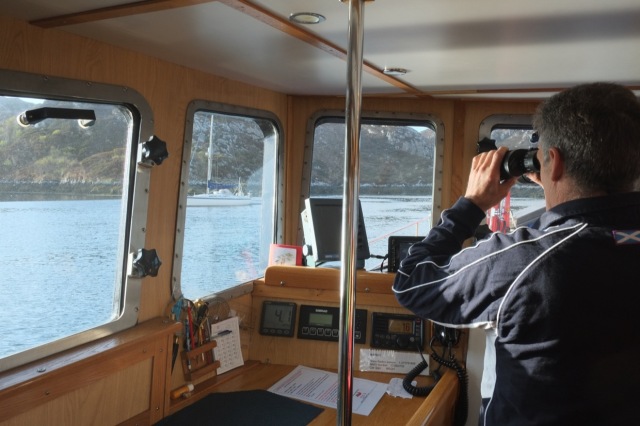 Early Start and we are off.

All too soon it was Wednesday morning and we were heading off early in the sunshine to Portree to catch up on missed Doctors appointments, then a leisurely drive to Edinburgh, the longest I have sat down for weeks. We made it to our friends Laurie and Jennie (Ex Yacht Rona, now retired) for Laurie’s birthday 82nd. We had  a night out in our favourite Italian restaurant Nonna’s, up at the top of Merchiston, excellent. Next day we were tourists and enjoyed both the Kelpies and the Falkirk wheel, well worth a visit.

We were shopped out after the wedding so it was nice for a change just to do nothing really, just drive, socialise and relax. All too soon it was back to Rona and the Yacht Zippe Too was still there in Big Harbour , although they had been over to Portree and back to Rona in the time we had been to Edinburgh. They are live/aboards and were in no hurry to leave Rona.

Back to earth on Rona with a bump and lots still to do. The season is for sure upon us but we are not like the rest of the area which it seems is very busy. Yachts are few and far between, day visitors have been hampered with the weather. But we must get all our signs and notices up and the cottage jobs finished or we will be rushing around when the weather suddenly changes.

We have been struggling to find a colour for the ‘Escape’ holiday cottage living room wall and they are either too dark or too light. But we are a long way from the paint shop so sometimes we have to take ‘pot’ luck. That is Lorraine’s job for now.

New Wheels on my Ladder

There are lots of wee jobs and here was one, new wheels on the roof ladder. I had a transport box that got smashed but salvaged the wheels and they are ideal for the old roof ladder, another job done. When I took Lorraine over to Dry Harbour we found two people on the beach, which is always a surprise when there was no one in the cottages or arrived via Big Harbour. Here was Simon and his partner picking winkles, another live aboard. They spend their time sailing round the West Coast to various haunts picking winkles for a living, enjoying nature (What’s left of it he says) and doing jobs here and there.

A Hard Day on the Beach

Good luck to them!! Better them than me. But that turned my attention to giving the boat a run and we went out to check on some creels to see if we could catch our supper, the only thing we did catch to start with was kayakers, loads of them half staying in the Raasay bothy the others in the bay at Big Harbour. It was not a particularly warm night for camping, good luck to them too.

Next day was more promising and Yogi was in the harbour pretty sharp doing his annual mop up of velvets.

With the weather a wee bit better and having decided that Thursday being forecast wet, I would do the paperwork then and try and get the sea end finished on the fence. So on Wednesday when I stepped out the door it was so warm it took me by surprise. The range of temperatures we are getting just now are a bit bonkers. That morning it was so warm and continued that way up until lunchtime when it went very cold, what is going on I thought. I threw off the waterproofs, then the body warmer, then the jumper but after lunch it was reverse. I got the sea end finished and was quite pleased with it although the ewe and lamb are still on the other side and I hope that does not encourage the rest of them to find a way out.

Hopefully the sheep do not abseil off the cliffs.

When we were out in the boat the other day we were in Dhu Chamas where the cliffs house lots of Cormorants, Fulmers and other birds. Notably a Peregrine. It was quite a surprise to find that there were only two pairs of Cormorants nesting, very strange. Apart from the feeling that the sea is certainly not busy with yachts it is certainly not busy with wildlife, hopefully that will change soon.