All the gear …..no idea!! A favourite saying of Wallace’s our ‘Seasonal Stalker’!!

Or Calum’s take on it: ‘ Gloichd’ Look it up in the Gaelic dictionary (online if you like, but as usual with Gaelic words I don’t think you need too………………

That is what I thought when I got the call from Calum on Tuesday last. We were in Inverness getting some shopping for the big event on the 30th of this month and happy in the knowledge that Rona was in good hands. However the last thing we expected to hear about was that he had a visitor, especially after I had looked at the forecast, 7 to 8 SW rain/snow showers. Perhaps a fishing boat but certainly not a kayaker!! 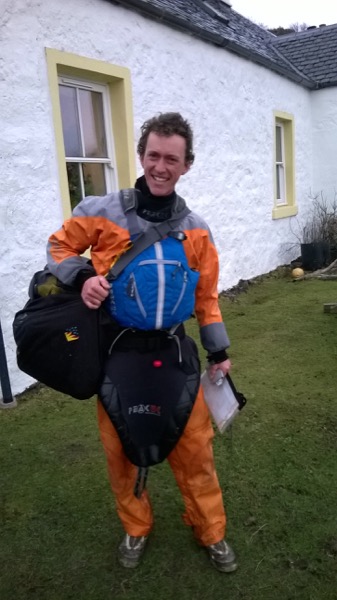 Calum sent me this photo and for sure he looks happy enough, I guess finding a warm bothy in such filthy conditions (not the bothy) was making him happy. After 13 years nothing surprises me about kayaking and kayakers (around these parts). I could fill a book with paddler’s stories. We are well placed to read the forecast for sure but with to-day’s technology those going to sea, especially for the first time in a new area, have that resource too which should be studied before making a decision to go to sea.

As it happens this lad had got as far as the middle of Rona when the weather put him ashore Stormbound (it was on every forecast we were looking at) and it really surprised me he had not seen it but had got so far. To cut a long story short he should not have been there in these conditions. With no VHF, patchy mobile coverage and a phone running out of power. How long would it have been before anyone would have missed him had he had an issue? I’ve certainly done some daft things in my life but the regularity that we see the sea going kayakers getting into scrapes makes me think that somethings not right and I guess that’s for kayak forums to discuss. BUT:

Don’t go to sea unaccompanied, without a VHF, without studying the forecast and without keeping in contact. By the way, don’t light fires either!!!!!!

Our kayaker ‘forgot’ to contact Calum to report his safe arrival at his destination which prompted Calum to then spend time tracking him down, his next call was Stornoway Coastguard who don’t need this type of business. It seems the kayakers phone had run out of power………………………………. the minute the kayaker arrived at the door he became Calum’s responsibility, whether you like it or not. He did make it home. So NO Problem Then!!!!!!!!

OK that is the grumpy man of Rona’s rant to-day, but hey, no one wants more signs up ‘advising’, which is what may be a suggestion at Sconser where most of them depart from.

I’m full of this cold that has been on my back since November and the weather out there is grim to-day, it has been a particularly difficult winter. Thankfully no outside projects of importance, just general duties.

Lorraine has just stuck her head round the door and said’ forecast’ ,  it is going to rain for the next 36 hours, joy!! (Friday night 6th March)

Back to Rona: This week we have been away for most of it, got back Wednesday late afternoon and had a lovely sail, almost spring like day, what a contrast to to-day. 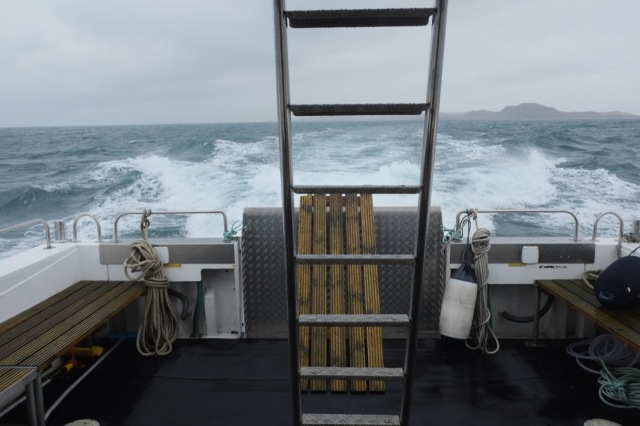 We got away on MV Stardust, Kevin was on his back having put a disc or two out during the week. So Ian took us over, it was ‘lumpy’ but we ran down the West Coast of Raasay and cut across. 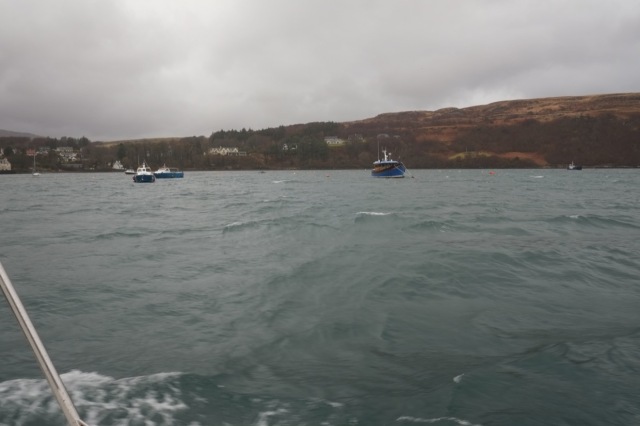 MV Aspire was languishing at anchor, just like Kevin. 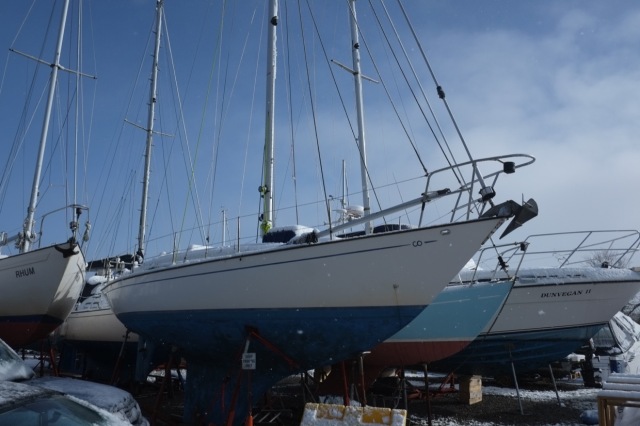 Cannot Get Away From The Islands

First stop Caley Marina, it was a beautiful day in between the snow which was just starting when I took this, hence the white bits. Can’t get away from boats/Islands. End of winter shopping and wedding prep’ was the order of the day. 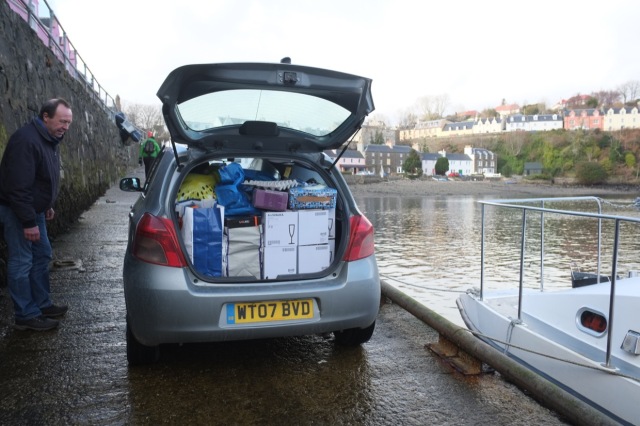 Three days shopping requires a tardis, not a Yaris, spot the champagne glasses. Ian should not have been surprised, he has seen it all before. 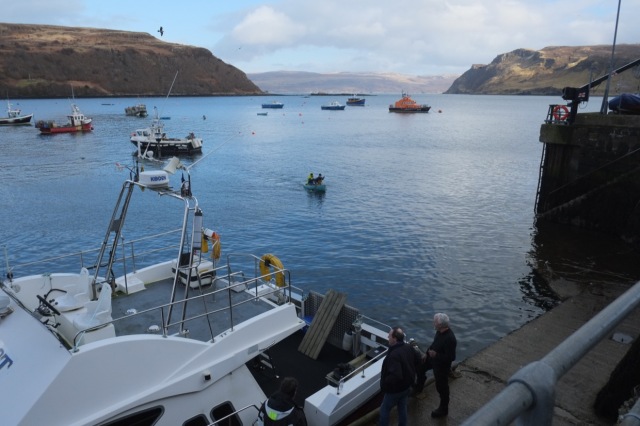 Two Men in a Boat.

It was, as I said a beautiful day, Yogi was paddling ashore just as we were leaving so we hung around to see him. Like most West Coast fishermen he is struggling to get out, I would think looking at this weeks weather he probably has done a day and half. I suppose the plus is that the ground will get a rest but the bills still come, despite the weather.

Rhoda MacLeod called to-day to ask about local carriage stamps for the Island of Gometra, she told me much the same story about fishermen there. Weather and no days at sea for weeks if not months and mortgages still to be paid!!! She also mentioned kayakers……………. 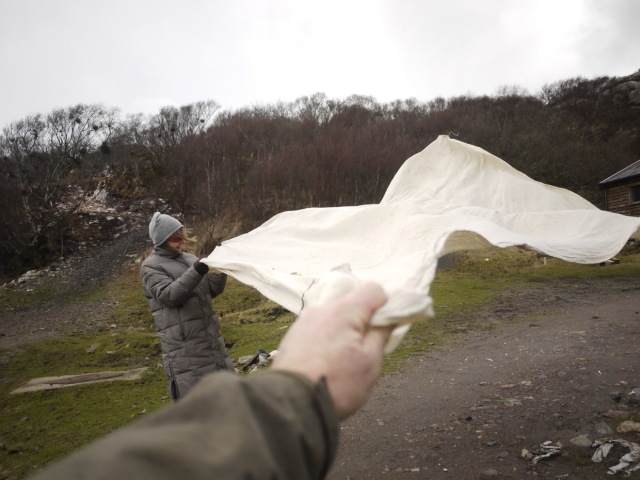 We got back and tidied up after Calum, although there was not a lot of tidying to do. But given the wind it was easy to shake down the dust sheets. 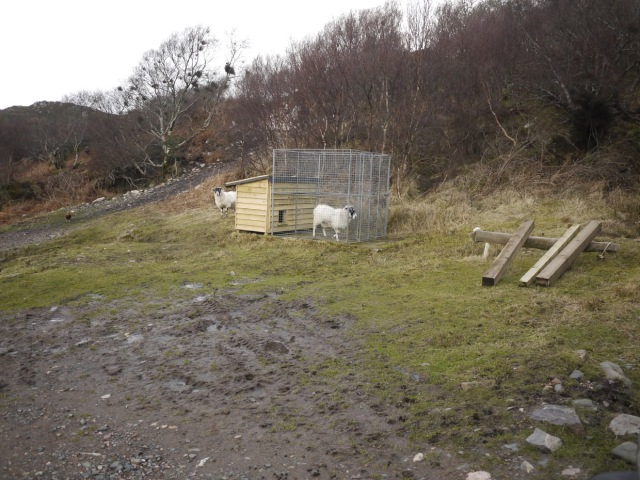 Even the sheep are taking every available shelter, old Spotty has taken to going into the dogs kennel. 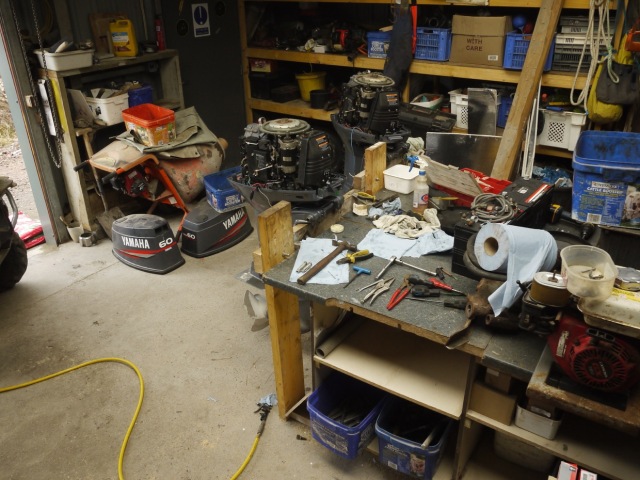 A Dry Job Inside, Thankfully!!

I got the bits I needed at Caley Marina and at least there is somewhere to go on a day such as this with the radio on and the door shut it certainly helps to be getting something done.

We had left Rona on Saturday, aware our visitors were struggling with the weather, Derrick and his partner are here for three weeks, loving the solitude but not so much the three weeks of storms, especially when the DVD player has had its day. So we went to Tescos as you do and got him another, he was very pleased to see it although they are enjoying the ‘experience’ of continual storms, it is a bit different from his home in Colchester.

So here we are Friday night, looking for a break in the weather. Nothing for it but to have a dram…………..