Another sunny day (Tuesday 29th April) trying to break through the fog. It has been an incredible couple of weeks of weather. Very hot and not a lot of wind. But on Rona, as usual, not a lot of time to sit around enjoying it, unfortunately!  It has been too busy with long days and short nights. Lambs, landing craft, diggers, broadband installation and the usual visitors.

The landing craft duly arrived with young Jamie Milligan at the helm, his Father Greg was away for a few days so his son (25 YO) took charge and did a good job. Hugh came with everything including the kitchen sink (I think). When I left the blog last week it was the calm before the storm and as soon as the lc arrived it got even busier. Dealing with 6000 litres of fuel and various bits and pieces took all of that day and most of the next. The sheep were left a bit to themselves, the Tup was for jumping out because I was tardy with their feed.

I need to shift that stone!

When we got ‘most’ of the delivery moving off the pier we took stock and were admiring the old pier for a while, marveling at the work the past generations had achieved without 7 tonne diggers.

A Work of Art

As usual no L/c would be complete without issues and a puncture was the first, but a quick lift with the digger and away we went.

I got the wheel changed and headed down South with the buckets and pecker for Hugh when I found a soft verge! Another disaster, too much haste I guess.

I got a lift out from Hugh and he headed further South making a great job of the very worn path.

Next day (Thursday) we headed to Portree with Spindrift for the Doctor and shopping, the Danes are coming 13 in total so the shopping list is pretty impressive, 120 beers for a start.

After a lovely day in Portree it was Pier Hotel, pint of lager and off back to Rona with Kevin and Pam, Loaded!!

Friday Kenny and Gemma arrived with guests, we had lunch together, Cullen Skink of course and then went to MV Seaflower to deliver a fish box. The passengers seemed very relaxed.

After lunch I had planned taking the burst exhaust off the jeep, which was straight forward. 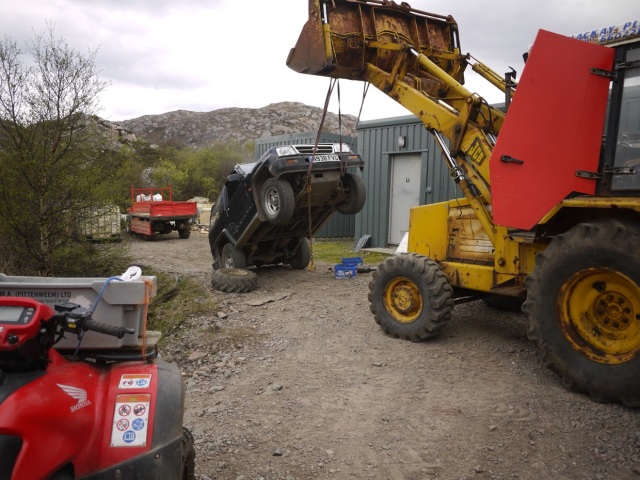 Who needs a jack?

In the middle of it all our first foreign yacht arrived, Harrald and his wife all the way from Friesland, arrived, very interesting couple and very nice people.

Harrald and His wife 80 Years Old and still sailing

they stayed in the bay for a couple of nights then left for South Skye and then the Faroes. Saturday morning the Archaeologists left and they seemed to have more stuff going than coming. 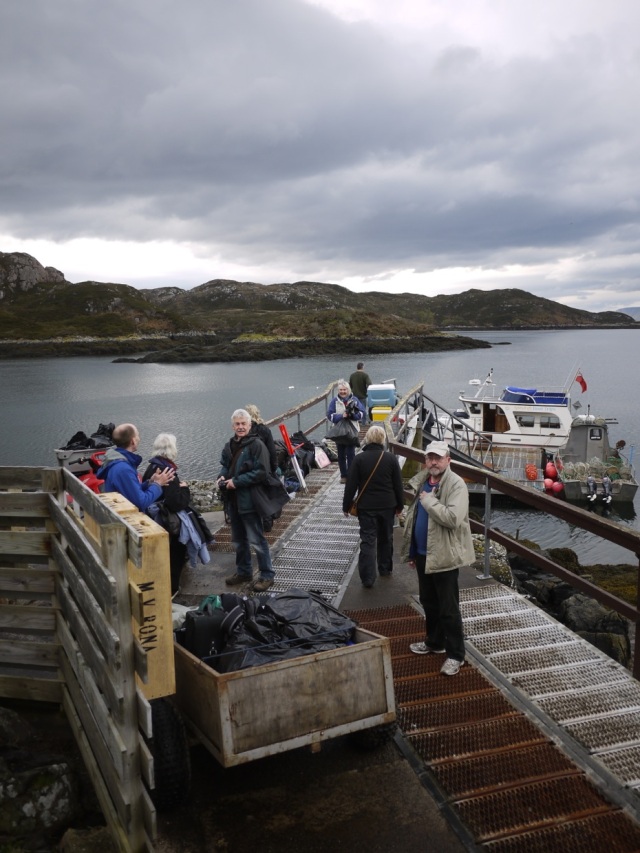 Another busy Saturday but ending with a showing of ‘Django’ up in the Rona Cinema, Hugh was intrigued by the popcorn maker, he had delivered it (unbeknown to him) in November for our Xmas from my son.

The Wonder of popcorn

Next day work as usual, a bit of a break by going out with creels and the catch, the first lobster of the year.

Hugh at The Helm

looking back it was a fantastic day and view of the Cuillins.

The view from the mouth of Big Harbour

It was deemed too hot to sort lambs out Sunday so Monday was the time and with thick fog it could not have been better. Very cool and good for the sheep. 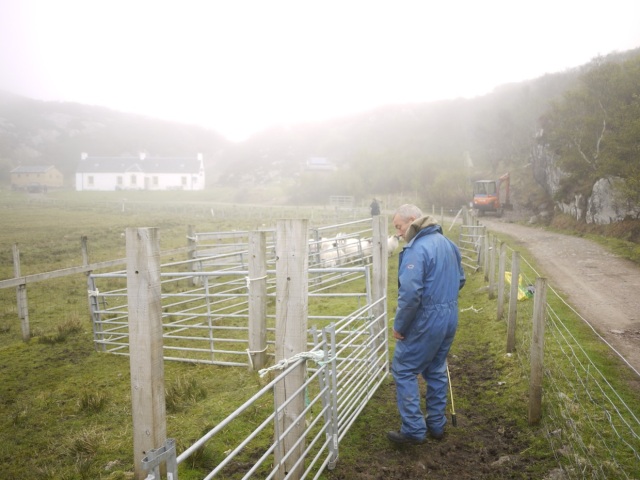 in the middle of it Ali from Applecross arrived with Simon from Eigg, here to fit the new broadband mast for the Applecross community.

I had completely forgotten them so down tools and all hands to getting the mast and equipment up to the chosen spot.

Heading into the fog

Once the fog had cleared we finally saw sight of our targets and the guys got to work. 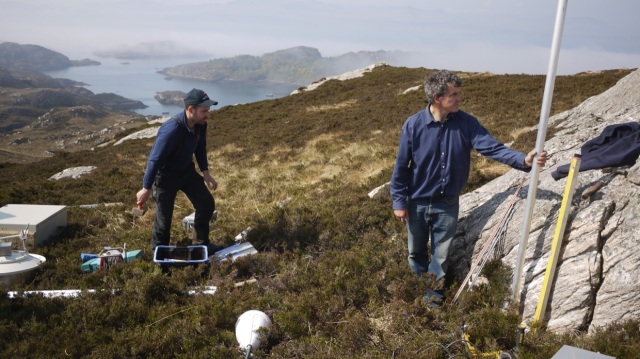 It is now 10pm Tuesday (I think) and lately we have been talking about our working day here and there was a thought that 8 hours was a good day here but 9 to 5 doesn’t really come into it here and it just seems to roll on, one day to another, well it’s not work is it…?