Waiting For A Bus/Silence at Last 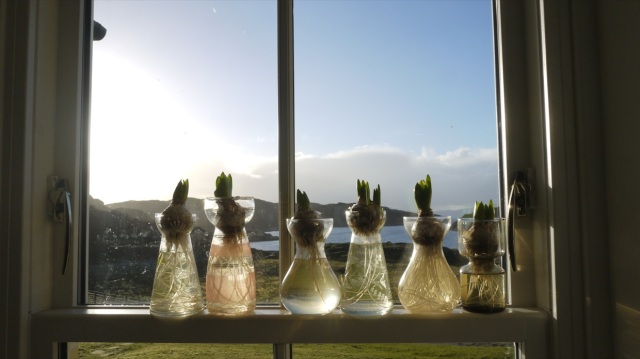 That was Boxing day, L said take a picture, it’s not often we see blue sky at this time of year so I did. But it was good to get some brightness it has been dire.

The View From The Velux

Back to Xmas Eve, this was the scene first thing in the morning, what a day, severe gale all day. 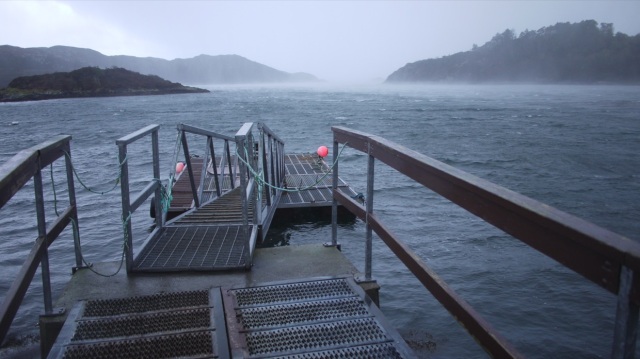 I went down to the pontoon for the daily check, to see what had been ‘weathered’.

And this squall  appeared, a wall of white came across the bay, I had time for one photo before I had to turn round and the calm-ish sea got really rough in the space of a minute.

Julie looking over my Shoulder

Christmas day dawned, no snow just the stock looking for their breakfast. It was Xmas so Julie had an extra feed, but goodness knows what she looks for over my shoulder.

It was a reasonable day, we even managed a walk to the top of the hill. It was lunchtime before we opened presents but we weren’t really up till 11.00am!!!! 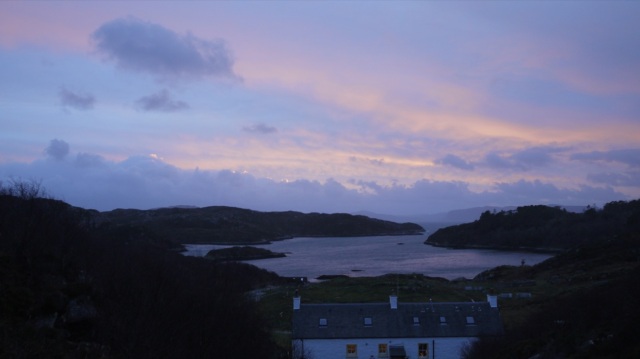 First Decent Sunset for a while

Putting the chooks to bed it was nice to see the first decent sunset of the year, roll on the cold high pressures. 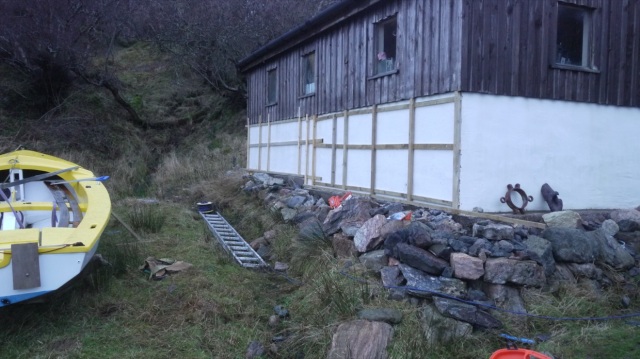 On the back of the good sunset I was inspired to start the cladding of the shed next to the house. We clad it, traditionally. But that is no good on Rona, so we have to double the cladding and give it the Ian Buchanan treatment. Horizontal cladding. It works best here and should stop the rain leaking into the building. Which has been rotting the inside for 3 years. Silence: Working on the shed and no wind was such a pleasure. To hear the boats , the birds and the animal noises was quite refreshing. To have no wind noise was amazing, it had been so long. Even Julie was heard making ‘deer’ noises, roughly translated – feed me!!

That night I got it into my head to develop the films I had taken this year, great fun and a much better feel to it than the digital stuff but of course we would take for ever to blog if we were using film so I’ll work away with digital but this years project is to take a picture every day with a b/w film. That should be interesting!! I have put together year books for Rona since 2008/9 and various other projects. Hopefully we can leave a record of our time here.

Next day this is what met me at the door of the genny shed. The return pipe on the genny had fractured and the floor was swimming in diesel. I only went to the shed looking for something. If I had not it would have been leaking forever.

Turns out the pipes for the return had not been put into place and were floating free!!! I think this led to them being perished quicker than if they had been routed where they should be (not my fault)!

I got that fixed and was stinking of diesel but that was no problem because Kenny was coming Sunday with the delivery of Kerosene. They duly arrived, Magnus Kenny’s son and Budge the crewman. We unloaded but could not persuade them up for Cullen Skink, so a flask was provided and the long overdue Xmas presents. 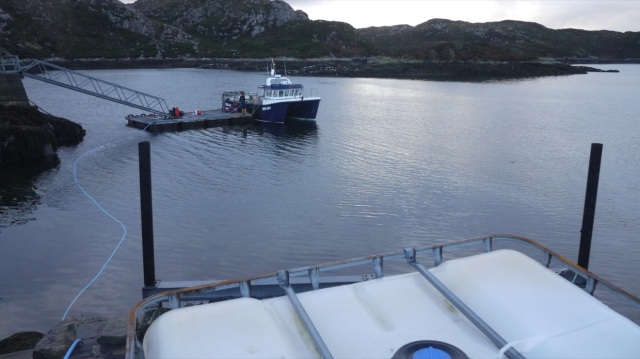 We got most of it unloaded when Kevin and Pam arrived on Spindrift with our first mail boat for two weeks. It was a bit like waiting for a bus, nothing doing then they all came at once. But it was good to see everybody.

None for weeks then two at once.

It was good to catch u, but all too soon they were gone and it was up to the Lodge for Xmas day the sequel. 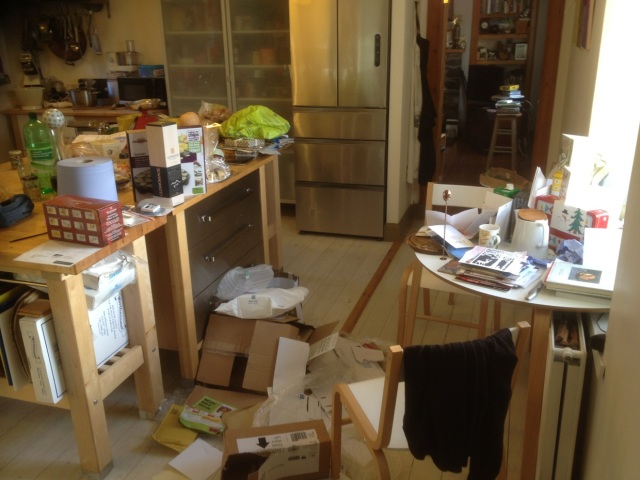 It was fantastic to open all the cards and presents and spread Xmas out. The weather is not all bad.

Then after a brief lunch and a Lemincello from Andrew, many thanks!!! It was off to Dry Harbour with the fuel. It was good to get the tanks filled. It has not been a particularly bad year for fuel but it still goes down. I was going to fit the cowling that arrived from Portree but it disappeared off the tractor. So I cleaned the gutters and loaded the gates for home, I moved the ladders from Escape to the cottages needing the cowling. All in all a very good day, oh and it was dry. 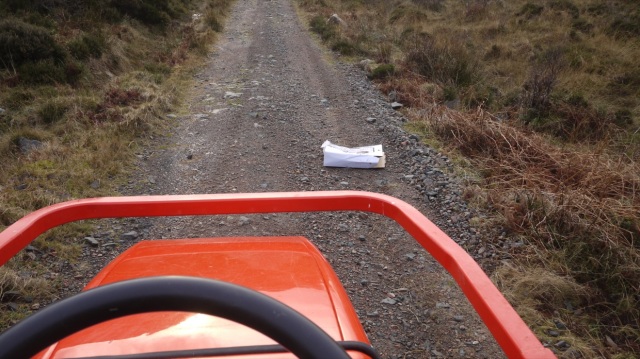 The £64.00 cowling had disappeared but I just knew I had run it over and of course I was not disappointed when I found it on the road, flat. That’s the way it is. That night it blew a hooley, quite unexpected, not forecast but a very strong wind blew all night so in the morning I was quite surprised to see absolute flat calm. I took a trip down to the pontoon for the daily check and counted 75 seals just across from the pontoon. They know where to go for shelter. 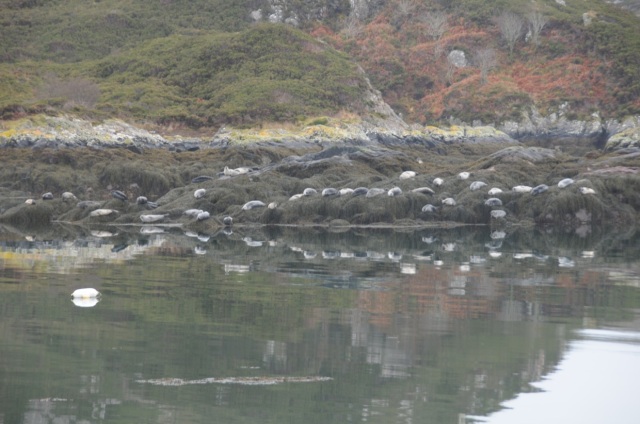 It turned out a good day so I pressed on with the shed and nearly got it finished. But had to dodge the showers to-day  to get it completed. phase 1. The East side is next but it will be a bit more work. 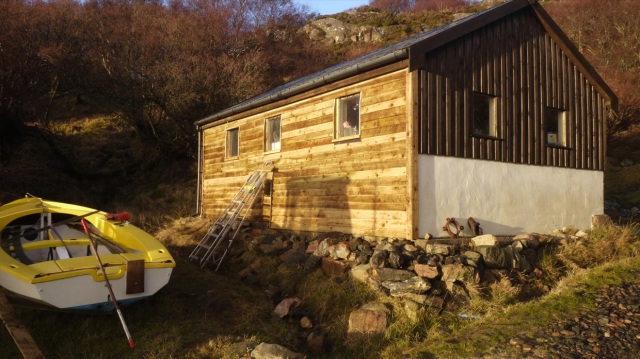 Hopefully this will stop the rain getting in. As the day progressed it as been wind/rain/hail and glorious sunshine. This afternoon for one hour it was glorious, so finishing up I thought I would panel beat the chimney cowling and fit it, pick up L who was at Dry Harbour and do a little at Skyescape. I got the cowling into some sort of shape where it could be used and got on the roof to fit it. Did that but on the way down the ladder came adrift and I shot down, too quick for me but no serious damage incurred. We came back over the road and found the hens were awol from the poly tunnel. So the next hour was spent looking for three hens, we found two but one still remains at large, maybe it will first foot us.

So here we are the last blog of 2013, looking forward to 2014 for sure and before long the first visitor then yachtie will appear and hear we go again.

Wishing you all the best and we look forward to seeing old friends again in the New Year.

2 Responses to Waiting For A Bus/Silence at Last