After three weeks of mixed but good dryish weather we decided to build the utility room at the rear of the Mission House (Skyescape/Seascape). This was the plan (after the stalking, before the Danish invasion of workies who are going to refit the kitchen in Seascape) whatever the weather Iain would come over on Saturday, all the material would be there and we would put up a lean too that will help to create space in the ‘cozy cottages’. That was the plan.

So, Saturday Iain duly arrived, we set too to prepare, Mel and Lee had come over on the same boat for a week away from the ‘noise’ but their cottage ‘Escape’ was far enough away we would not bother them. However not all was good, we were short of corrugated iron for the roof and other bits and pieces, not so easy to nip down to B & Q here.

I had prepared by putting down the found for the build but there was still loads to do and Catherine, Douglas and the dogs had just had a week so nothing could be done until thety left, we were keen to get going though. The first thing was to shift the gas bottle stance (which never worked) but it still weighed a good tonne. It is now a mooring weight!!!

Sunday morning we squared it all of and set it out, it was grey and damp but nothing too serious.

Heading home Sunday the prospects were good, it was a nice view over to Torridon, the stags were still roaring all in all a lovely evening. Monday broke to a beautiful day and with the sunny weather we got lots done.

It was all go and we worked until sunset. Lee was down taking the sunset but it was a bit better over the hill.

Lee with his trusty tripod.

5 minutes later from the top of the hill.

Okay not spectacular but we never get tired of it.

Next day Monsoon!!!! We have never seen rain like it, in 10 minutes it went from dry to this and then it was the Battle of the Somme!! Mud glorious mud. After that for the rest of the week it just topped the water level up and here we were trying to make it better.

We had duck boards, covers, you name it but the weather won every time. There was a wee bit of respite Thursday, I even saw a yacht over at the mouth of Torridon Loch heading to dry dock I guess, but the weather  just kept coming. 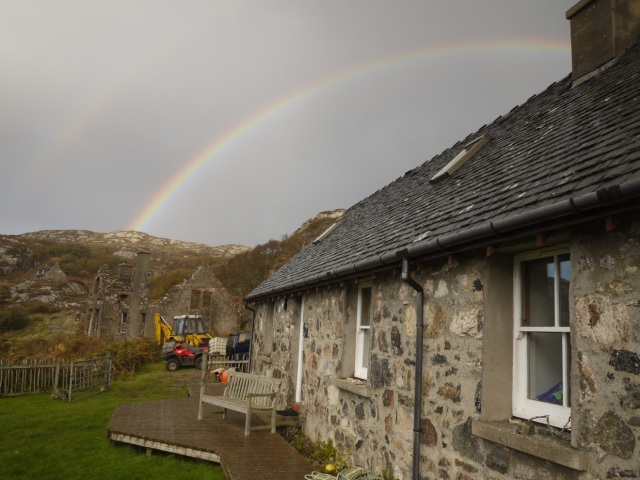 Nothing for it but to  carry on. 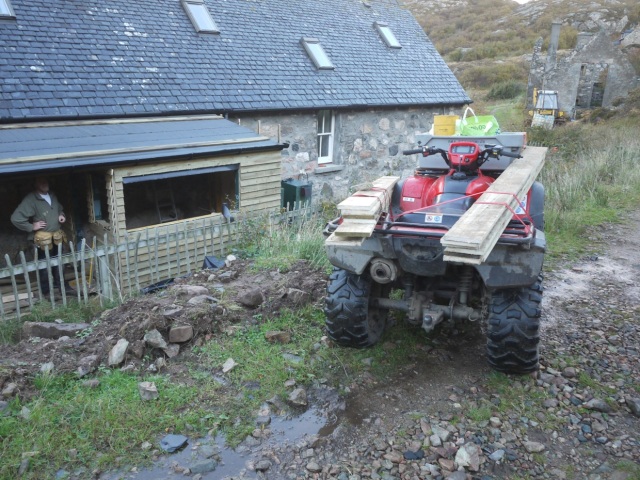 We ran out of boards quickly but I had a few thinner ones so they were pressed into service, needs must.

With the cover up it got easier, we could at least cut timber safely. But mentally it was all getting a bit grey. Running out of time we had to resort to nightshift and Iain made the door in the shed after dark.

Thank Goodness for the Shed.

That was Thursday night, running out of time and still no tin for the roof but then, Friday morning a call from Jewsons to say the tin was in Portree so Pam and Kevin were pressed into service and the roofing arrived. It was a lovely morning but not for long, the rain was not far away.

This was where we got to Friday night, the flashings and bits and pieces still to do but a good working week. But Lee and Mel had a good weeks holiday even on the building site. Unfortunately the fotecast was bad so they had a very early start as Kevin and Pam were over at 8.15am to pick them up.

Spindrift at the Mouth

Looks like more of the same next week but fingers crossed I’ll get it all done before we go off on holiday.

The point of the exercise is to make way for the renovations of the cottages, after twelve years of heavy use it is time for an upgrade and the extension is to house the wash machines to make for more space inside the cottages. It will be all done for Xmas I’m told!!!!