Wednesday morning: It was pretty breezy Saturday and continued into Sunday so nothing for it in the morning but to make some venison burgers, first thing we got to it and produced 50 just for starters then Kevin phoned with the news that 2ish would be around the time the wind would fizzle out. So we headed over to Dry Harbour with news of the ferry time. 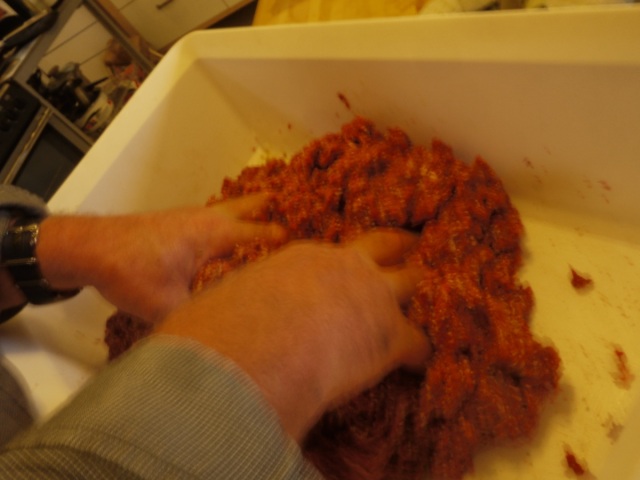 Back to Big Harbour and it was time for the sheep’s dose of Bravoxin  (for Braxi/Fluke etc), so having Paul and Becky (ex Soay) in residence, stormbound at the bunkhouse, I pressed them into shepherd service. Paul having rounded up the Soay sheep many times he was good at being the sheepdog, in no time they were penned. An hour later the lambs were separated from the Ewes and the Tup was cast out. The weather too was improving but at least it was good to have a midge free sheep pen.

2 o’clock came but it was still blowing so Kevin held off a bit then left just as it was calming down to a force 4. Mid afternoon the folks arrived in glorious sunshine to Rona and our stormbound guests were leaving. Mike tried to escape back onto Rona but we managed to bundle him on board and the ferry duly departed.

It turned out a beautiful evening, Paul and Becky decided around tea time to head off for Broadford. Unfortunately they left their water bottles but were too far away to call them back when I found out. Becky found out when she went to make a cup of tea!!

It was a very pleasant evening and hard to believe that we had just had two days of storms. Sunday night the old converted barge ‘Mascot’ arrived with a small group on board, a few years ago there were quite a few of these barges  around but they seem to have disappeared lately, this is the first one in for quite a while.

Monday morning I pressed Andrew from the cottages into service and got him to help me with the new furniture for the Escape cottage. We are having the Alasdair Sawday rep’ to-day so it was timely getting the new stuff into the cottage.

Later Monday the wind completely disappeared and the midgies came out in force so we decided to head out to check the creels. The first one provided a pretty big octopus which was very funny to handle, we threw him back and he left the sea black with ink.

We were trying to prepare for our inspectors most of the day but kept getting stopped by our visitors, we had some good ‘blethers’ which is easy for me but not so good for getting on with the work. Ian Bell off Yacht Dazzler a nice Sigma had called to thank me for posting his trousers that he left ‘hanging about’ last year. 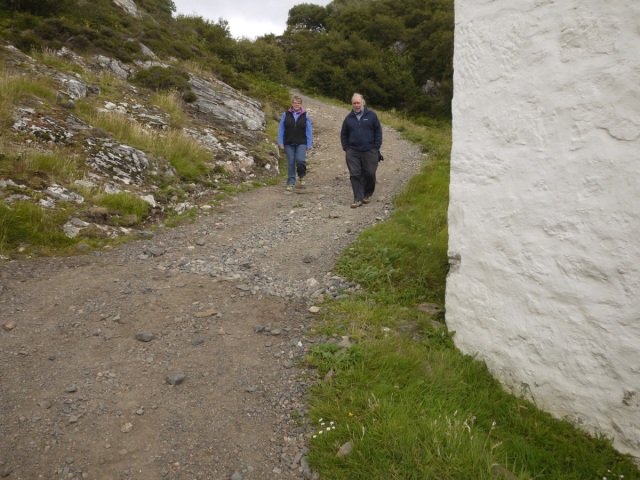 Tuesday we had a booking for the bunkhouse, Marty and Malcolm turned up after I had prepared it for them but decided they had to get back to Inverness so after a quick shower and lunch on the shore off they went, just then Andrew my summer neighbour from Torrin Schoolhouse arrived to look over our water supply, he was up for his annual holiday and was hoping to stop the blockages he has been suffering in the water system.

We had a quick tour and off they went with some venison, promising to return if I could get them a haunch for their next weeks guests.

All afternoon Yachts had been coming and going and with a virtually empty bay the Yacht Sattva chose the mooring and the next yacht in decided to ‘park’ right beside him. He was so close I went out to let them know but it seems they survived the night without touching. It never ceases to amaze me that yachties always moor up so close when there is so much room.

I had been out in the boat just before that to find out why the bay was full of smoke, having worked in Forestry for years I get very nervous when I smell heather smoke or Rona in the summer. As Lorraine headed down to the hens the bay , all of a sudden got blue with dense smoke. We had seen kayakers earlier on and were thinking with the midgies coming they had lit a fire and so it turned out but the were very co-operative and put it out. It is always a bit of an issue because for sure I would probably do the same but unfortunately with such a small Island and very long rank heather it is just waiting to happen and the results would be quite devastating. Fingers crossed that it doesn’t happen on our watch.