Well it had to happen, we have been watching the yachts trying to find this reef all summer and one or two have had a bite but Yacht Maggie May hit it right in the place you do not want to and leapt out of the water landing further forward tight on the reef. I was on the phone at the time giving a running commentary to Val our ‘Favourite Place’ writer. Shortly after the crewman David arrived at the house looking for a tow. Which i obliged but unsuccessfully. So here we are waiting for Portree Lifeboat to arrive. 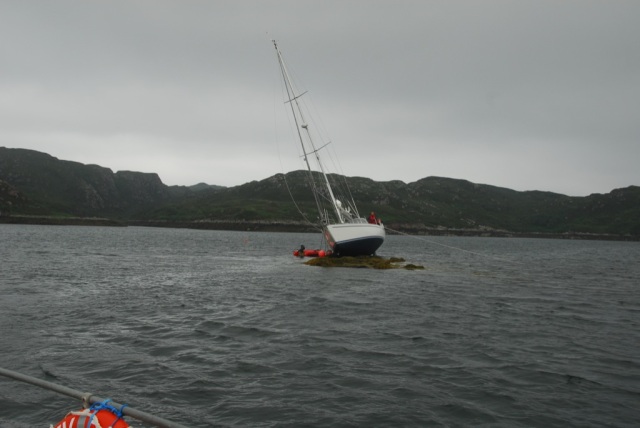 I’ve just been out to see them with John and his son from the cottage, a bit of summer excitement!! Had a chat with the skipper who is a bit annoyed at himself but no harm done. With high tide not until 1am Wednesday and only a neep tide, ropes everywhere, anchors that are stuck and a SE wind blowing them onto the rock. The decision to ask the Portree Lifeboat for assistance was agreed upon and they are on their way.