Should Have Gone To Specsavers

Wednesday 10th: It started off a good day with glorious sunshine. Kenny and Gemma arrived on Seaflower for a visit with a group of visitors from around Shieldaig. 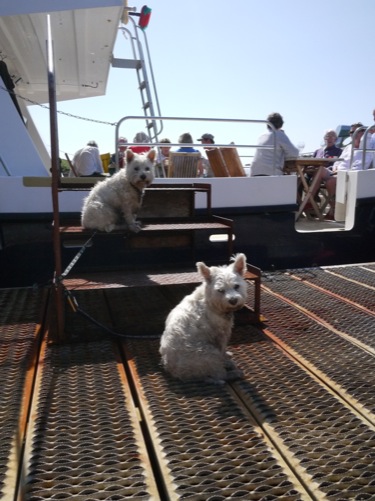 Dogs are topical just now but no danger of this pair worrying anything!! On the boat was a contact I had made years ago, Gillian Zealand. Daughter of Colin Gibson who used to write ‘Nature Notes’ in the Sunday post and illustrate it. Her late Father had been here on Rona with the Dundee University study group in 1933/34. She had copies of some of his drawings and we had a good chat, she was pleased to see the picture of the group on the walls of the cottages. Hopefully we will get some more work to display.

The Seaflower left after the usual superb lunch, Kenny catching a plate of ‘Cullen Skink’ up at the Lodge. Later in the day we caught our dinner on Yacht Runrig, our good friend Laurie (crew) and owner Alasdair,  invited us out, after a busy day we did not need asked twice. 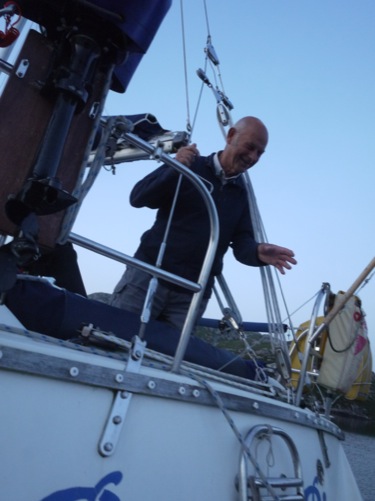 Alasdair served up a lovely meal ‘Chicken Runrig’ and after a few ‘drams’ it was back to base.

Thursday 11th: Off first thing to Raasay with Paul and his sons. They had arrived by foot and I had picked them up a couple of days before. They had enjoyed superb weather and were sorry to be heading back.

I got back around lunchtime and set about more fence work and preparing for the sheep shearing.

The idea of the fence and gate is to shut in the sheep once we increase the flock and to create a new path for visitors so that they have a more direct walk.

Friday 12th: It was a long day, only my second time shearing, hoping for Calum to arrive to assist but his time table was delayed so nothing for it but to get on with it. Only 12 sheep to shear, plus dosing them and 7 lambs it was always going to be a long day. 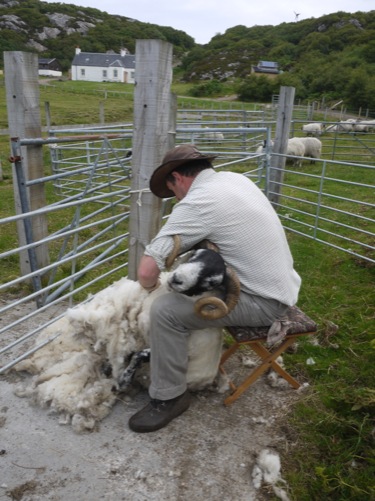 I Got There in The End!!

It went ok, blood was spilled but nothing serious, the only thing that suffered was my back and even to-day I’m still very stiff. There were interruptions but it still took until 6pm to finish, boy was I glad to see the back of the last one. That was the blood, I grabbed one of its horns and it snapped off, much mess. However she is well to-day and no more ingrowing horn. It had been previously damaged. The hens got involved too and nearly got trampled more than once.

When I was shearing, a visitor from a yacht approached and when asked to put the dog on a lead was not impressed, didn’t have one anyway and I was told Rona always felt like an unfriendly place. Then her dog started barking at the pen of sheep. On that she left!!
One hour later a couple arrived with another dog, on a lead. Stopped well short of the pen and asked was it ok to continue. On that we had a nice chat, the dog sat and did as it was told (on the lead) and they went on their way. It never ceases to amaze us that some dog owners think they can walk through our place where sheep, hens, cats and in the past our own dogs are around. Yet others follow the code without question. We look forward to our meeting with the local Police officers to find out our way forward with this.

Just after we finished the sheep Yacht Wender a very old yacht (more than 100years old) arrived, Sue and Sam had let us use their yacht for our stamps of last year, so it was great to see them and this time with their Grandchildren. Just in time for a G&T but we had visitors coming on MV Stardust so we said come back later!!!!

Sam And Sue Relaxing after a days sail.

John Kerrison and his family were coming over on Friday night because the cottages were free and with the forecast being so good MV Stardust had lots of bookings for Saturday, so everyone was happy to go along with it.

John Returns To Rona (Yacht Wender in the background).

John had been over to Rona in the seventies with the Applecross Outward Bound group. So he was keen to see what had happened since then and having grown up in the same village I did he was keen to swap news. Arriving on a sunny night with Dolphins making a show was a good start but since then the weather has taken a dip, but it will return I’m told. Sam and Sue came up just after we returned from the cottages and in the middle of making Tea, nothing for it but a couple of generous gins but it was late before we sat down to fish and chips, 10pm!! Then even later Calum arrived on MV Kestrel for a weekend celebration, with Eileidh Ann and Alasdair (and the dog Seorus). So nothing for it but to have a whisky with them in the bothy. Calum had taken up his accordion after years of sitting in the corner so we were looking forward to getting a tune.

Saturday 13th: Now retired he tried a bit of busking on the pontoon in the morning but the ‘yachties’ didn’t reciprocate and his hat was pretty empty. Later in the morning MV Seaflower arrived back for a second visit, this time with the Lochcarron Music Group. Calum played them ashore. 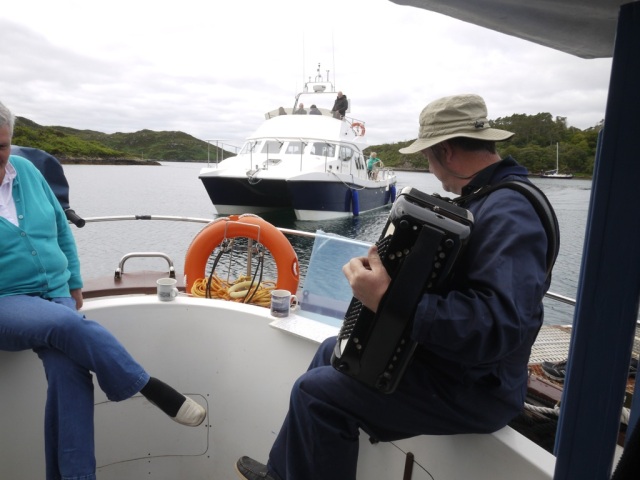 It was a fine enough day and more time to get a yarn with Kenny, who was showing us how to age a lobster. 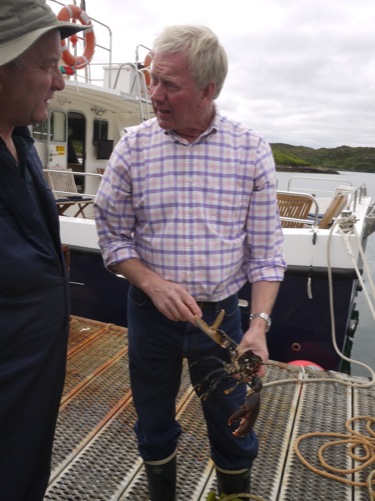 The Music Group had their lunch and a wee session started with, folky for a change and well played. 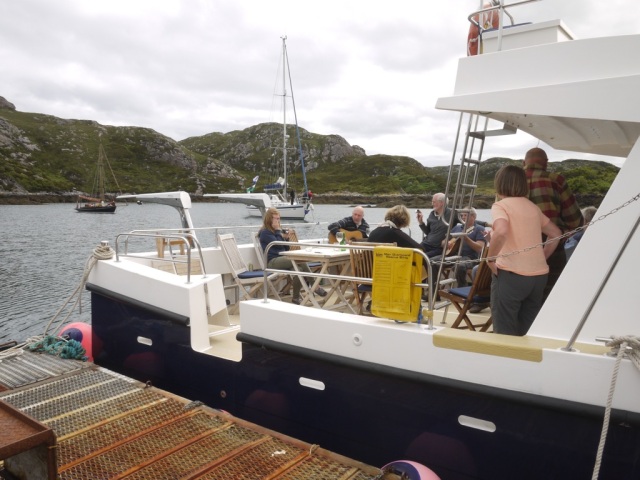 We went out on MV Rona after our guests left for a spot of very successful fishing and picked up Celia and her friend who had walked up to the end of Raasay. So after a full day we got to the party in the bunkhouse at 7pm instead of 6pm which was probably a good thing because we were pretty tired. However the spread before us was superb and of course we ate too much and sank into the armchairs for a session from Calum. 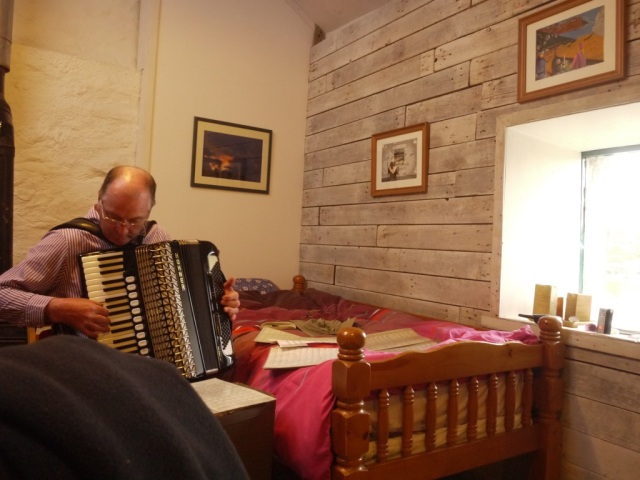 Seorus the dog got involved too. 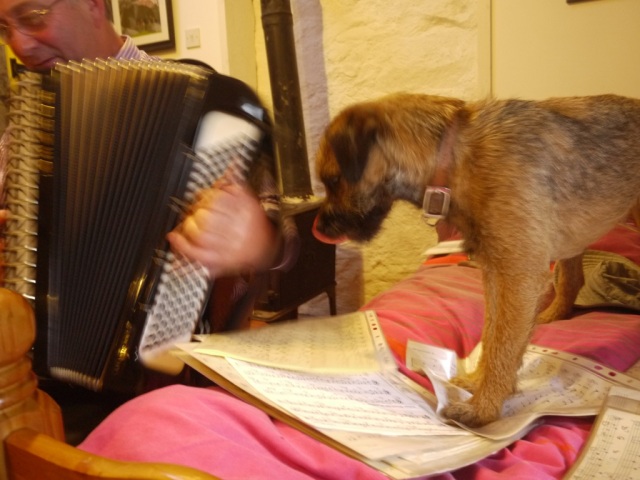 Then outside for a jig. 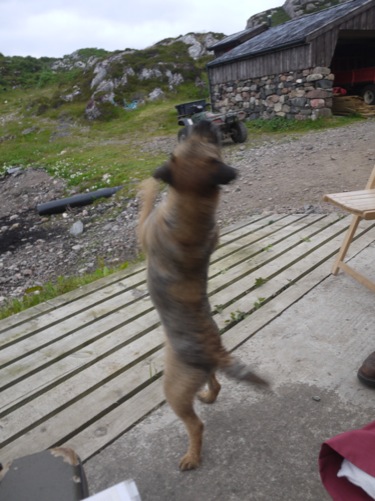 But he soon flaked out.

Calum played until 9pm even suffering the midgies for a spot of al fresco playing, much appreciated by the 14 yachts in the harbour. We had a flotilla on an Islands Whisky tour. 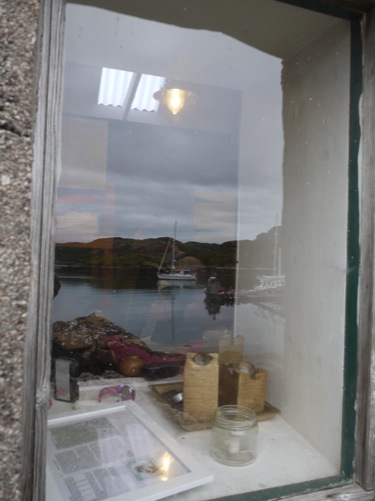 A great night and a couple of hours relaxing listening to Cuillin FM’s, Baliach nam Port with DA at the helm. I recorded Calum, maybe we will hear it on the ‘Balaich’ some Saturday!!

Sunday 14th: A later start but back to the fencing for an hour, the weather had started to bother us and Calum made an early exit as it was gusting quite strong, some of the yachts decided to stay, although reports came in that the sea was not too bad. Later on it certainly felt very strong. So not much more for it but to tidy up and prepare for this week. 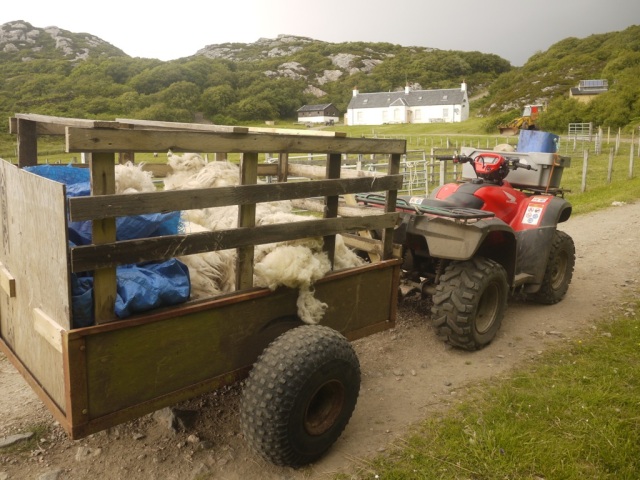 The wool unfortunately was not of good quality and pretty dirty so I packed it away and wondered what to do with it, I guess we will think of something. The final job was to empty the mail box., collect the postcards and any landing fees. Always an interesting moment after 26 yachts in the bay over the weekend (not all came ashore though). All I can say is that it was a bit light!!! However, I did get this note which really is the kind of note and comment we get from the guys who visit and really, really get what Rona is about. I will take a pic of their ‘sculpture’ but not yet as it is pretty grey out there, perhaps when I pass it on the boat on the next trip