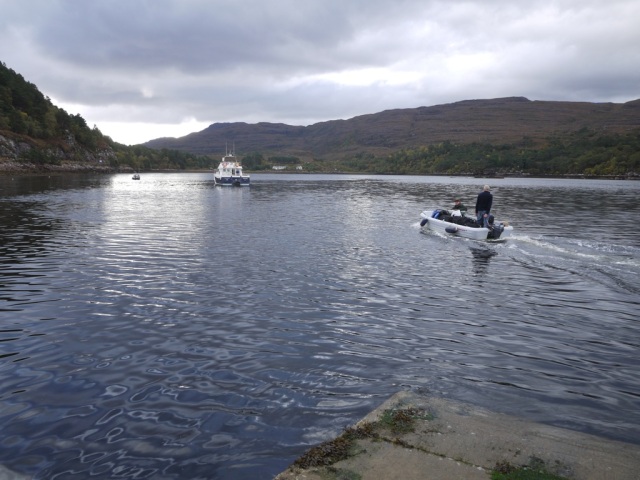 Last time I blogged we were on our way off to Edinburgh to pick up our second party this year (stalking) from Denmark. We had a good trip down to Edinburgh although the mini bus we hired was,  different!! We arrived back three days later to Rona via Shieldaig. Kenny had a few runs out to the MV Seaflower with the baggage but was happy to tell us about the new pontoon they had just got organised. That should make life easier for them over there. 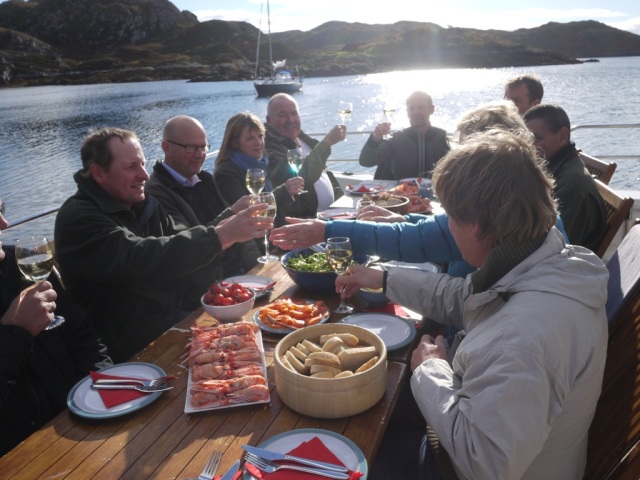 We had a lovely sail in glorious sunshine and enjoyed a superb lunch courtesy of Gemma. It was very pleasant to sit on our pontoon and enjoy some late sun. The yacht behind us never stirred and never came ashore, funnily enough it never paid its mooring fee either and left just before dark, Noted!!!

Once we were fed we delivered the various tenants to their weeks accommodation, always a pleasure in good weather. Not long after it was back to Rona lodge for our first supper. The plan was to utilise Rona’s food resources and a few local extras.

Tonight it was Shieldaig smoked salmon, crab, lobster and some bread. Quite simple and of course white/Rose wine. Finishing off with a dram from the new bottle bought last week ‘The Monkee Shoulder’, a nice blend of three whiskies from Speyside, the best!!!

Next day it was down to business, we left the Lodge in rain which turned to hail and that made the stalking difficult. The deer had more sense to be up on the hill. But it quickly cleared. No luck though, I headed home leaving my ghillie with two guests out on the hill. They returned later to report a clean sheet. Later that day just before dark a stag was spotted and Max accompanied me onto the hill where a successful stalk was completed. Late as it was we finished up with drams at the larder, which is the custom. No pics, too late.

In the morning another stag was spotted and Jens was lucky to stalk into a very good stag to the East of the Lodge. In glorious sunshine we climbed up to the second highest point on Rona and had a good crawl in. Just before we got to the shooting position a Grouse got up alerting the deer. We moved quickly and were lucky to get our stag.

We have a cull figure to achieve for the balance and welfare of the herd and for me that was the last stag of the year, so a big sigh of relief, now the real hard work started, getting it ‘gralloched’ and back to the larder.

As we were cleaning up the Famous Rona Red Grouse arrived on the scene. Our guests could not believe it as he did his usual territorial display. Coming right up to us and sounding off. He had three females with him so he was warning us off. He is quite a character and if I can work the ‘insert video’ to the blog you will see for yourself.

We got back to the larder where there was much speculation about the quality of the mature stags on Rona. Normally Estate in Scotland weed out their poor animals only shooting the good stags when they are getting old but Rona is a relatively new deer forest and the only deer we have are very good quality which is a reflection on the shelter, available food and stress free living they enjoy. The carcasses this year from Rona were clearly far superior to the comparisons in the game dealers chill/van. The weights too were heavy.

After the morning excitement we went fishing and were unsuccessful apart from 2 lobsters from our last ‘soak’ of the pots. It was a fantastic sunny day and we enjoyed good views of the stags rutting on the shore. Back to the kitchen the chefs were finding it tough!

Knud Chilling on the Kitchen Floor

Very quickly the week was passing and it was time for the last supper. Of course it had to be venison. 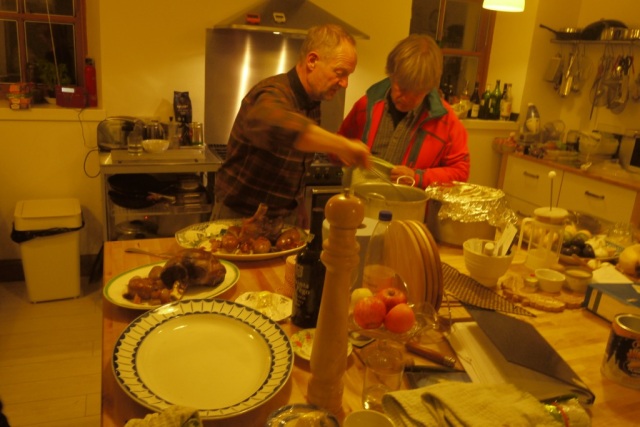 After the meal we left the guests to enjoy their last night on Rona and we sneaked off to a much needed early night. The thought of the drive to Edinburgh and the boat trip were in my mind though. It had started blowing in the afternoon so it was decided to go from Rona with Kenny to Portree instead of back to Shieldaig, Gemma had the pleasure of delivering the Mini bus. Kevin and Pam our regular ferry were still out of action after electronic trouble on the boat. It was Northerly so it would be a better crossing with the sea with us. We loaded the stags onto MV seaflower (a first!) Calum and Irene arrived via Shieldaig to look after the Island and lent a hand to carry the stags onto the boat. we reached Portree with no problems, the forecast was a lot worse than the actual sea, but it was good for our visitors to see Skye. Kevin was there to greet us and give us a hand.

The smelly stags were loaded into Kevin’s van and his son Calum took them to Kyle to meet up with Tarradale Game’s driver. We rounded up our guests after picking up our mail and headed South. A coffee stop in Kyle and a call to the game dealer found that they hadn’t met up. Turned out they were sitting at each end of the layby waiting for each other. Calum’s girlfriend Rachel was slowly feeling sicker with the smell from the ‘run’ stags in the back, not to mention the beasties leaving their host. 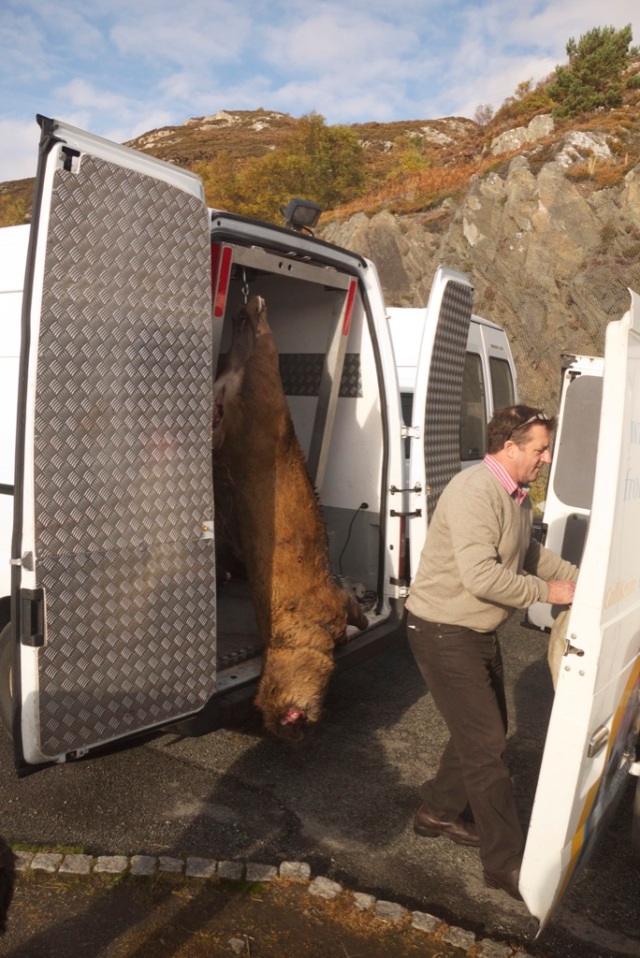 We drove off after a coffee at Hector’s Bothy (Kyle), very nice it was too after the refurb’. It got steadily greyer and after a stop in Edradour it started raining, by the time we got to Edinburgh we had a miserable night driving through the traffic but the lights were all green. As soon as we arrived at our hosts, it was livened up with a dash to ‘Nonnas’ an Italian Restaurant we love to go to with our Edinburgh pals. Later that night L left for Stroud to be with her Mother, who’s not very well. Next day much to Calum and Irene’s disgust I spoiled their weekend by coming back to Rona!!!

Calum came for me to Portree in the Rona boat and the evening sun was worth coming home for, feeling very relaxed after a pint in Harry’s. Next day it was all hands with a full programme of work before we depart next week for Denmark for our holiday.

Getting Ready for Fuel Delivery

We enjoyed a couple of days of lovely weather making the tidy up and fuel prep’ a lot easier. There was a little bit of electrical work and much discussion. Calum and Irene went off with Kenny to Shieldaig after he delivered the fuel on Sunday and I was left with the distribution of the fuel to the various tanks.

Not a bad job on a day like this. Next job after about ten washes in the wash machine and house tidy  was the boat lay up for the winter. It felt odd to do it on a day like this but the gales will be here soon enough.

It went  straightforward this time and I had it in place pretty quickly. It will be one less worry when we are on holiday.

All in all it has been a crazy ten days, the blog is as good as I can remember, the pictures certainly help and now it is too late to contemplate uploading the Grouse video, maybe tomorrow.

The weather has been incredible this week and for three days now we’ve enjoyed the midges, not bad but they are nipping in the shelter, quite strange this late but small price to pay for the sunshine and heat.

The deer have been very visible this last two days in the sun. They are easy to count so I  took a trip down to the South end Monday evening, I’ll finish off with three pics from that last hour and the report that there are some very good stags still on Rona. 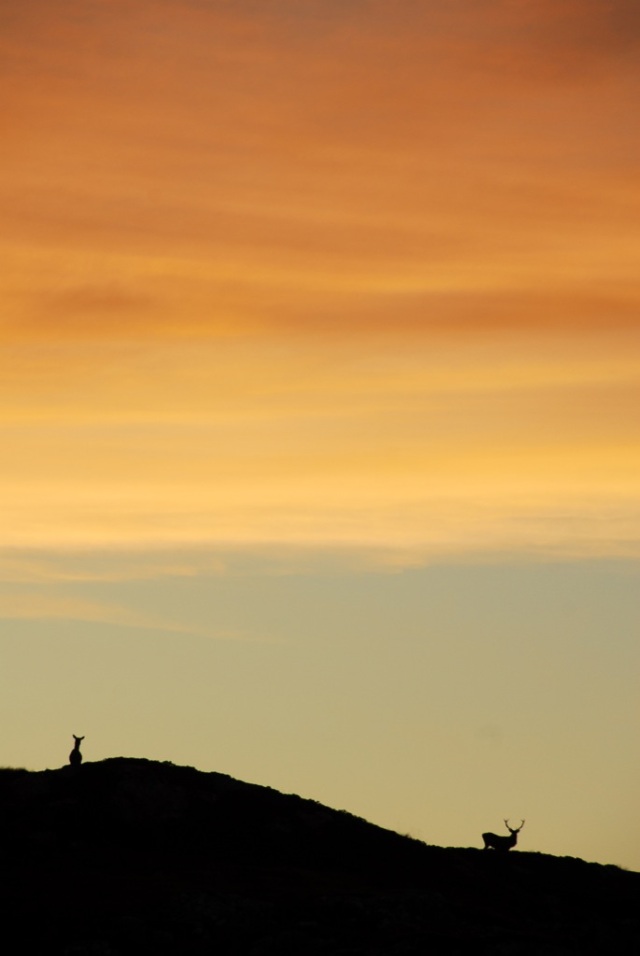 Dhu Chamas looking out to the Sound of Raasay

Ok I know they are squint!