Monday morning and it has just rained, Hurrah!! Never thought we’d look for grey clouds and rain but hey ho, we are happy to see some. The time taken dealing with water woes has been slowing us up but to-day and Saturday morning downpours have helped. Although the well at Dry harbour is still nearly dry, I guess it will take a while to get back up to full pressure.

It has been a while since I made a blog but sunshine, a visit from my son Murray, his partner Stacey and lots of other people dropping in has curtailed laptop time. Murray and Stacey are off to the Far east for a year and a half in September so a week on Rona was a good escape from the planning, although they were pressed into service.

The shed is taking shape and it was good to get a hand to fit the planks. The view from the roof of the ‘shed’ is quite something, I think Myself and L will be escaping there too!!

The View from the Shed Roof

Our Neighbours from Raasay appeared on the Thursday with a boat load of visitors (to them) from the South, they picked a great day to come up although it did blow up later. one of the party was the ex owner of our other neighbouring island the Shiants, he passed the island over to his son on his 21st birthday, quite a present. I was pleased to meet Adam as I corresponded with him when I first came to Rona. He advised about owning an Island and its implications, all good advice I have to say. Can’t remember what day it was but it was a busy sunny day, Simon Raaasay Engineering arrived with his wife and relatives, they told us about a dead whale that they had seen on the shore at Raasay (don’t know where). They had a beautiful day but I heard later the trip back in the breezy conditions was interesting!!

Friday morning started with rain, very heavy rain but quickly it passed not having that much effect. Kevin was coming with windows and planks, so rain then was a welcome pest.

A Wet scene out of the Bedroom Window

The tide was pretty low so a quick transfer to MV Rona made for easy shipping later at the turn of the tide.

Just on the turn we put the boat ashore and reversed the tractor to it, keeping the hubs out of the salt, but I’m sure there will be rust!!

Kevin brought all the Saturday goodies, the shopping, bits and pieces, and of course the mail. We get a delivery once a week so it is quite an event. l was on ebay so parcels were expected and my new stalking gear was coming but ‘Tommy and Mike’ at the sorting office were having a laugh I guess, the mail arrived in a ‘Honk Kong Mail’ bag.

Once Kevin had left,  the clouds cleared it dried up and we got on with the usual stuff. Murray helped start the new water tank fitting for the larder, Kevin had brought fittings from Jewsons. We got as far as we could with that but the tanks were low with the filling of the spare tank for dry Harbour. We abandoned that job and went out fishing as it was late in the day. Just before we left  our electrical engineer pal Calum arrived with Irene on the Kestrel, just after three guys on a very powerful RIB. Mark, Beach and Hamish who were on tour rocked up too they wanted to stay in the bothy. They were travelling around the west in their Redbay RIB with two 250hp petrol engines!! The boat is called ‘Luskentyre’. It looks a beast. We had a good crack with the lads who were feeling the heat.

We got them set up and went out for some Makerel, 20 or 30 fish later we returned to a filleting session on the pontoon, drams supplied by MV Kestrel. 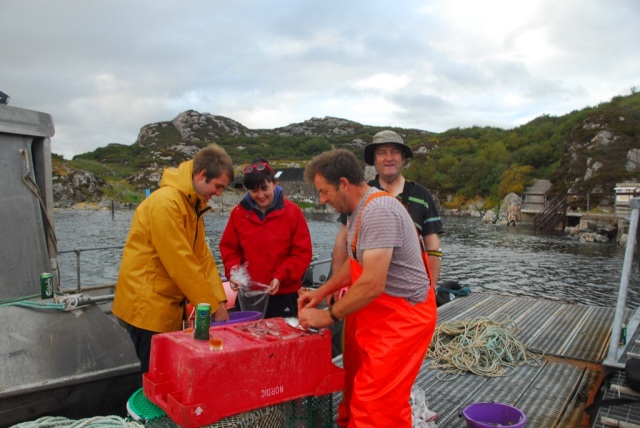 The filleting finished we surveyed the Redbay RIB with its massive engines and fully shock absorbed seating, I can’t remember the top speed but I guess more than 35/40knots?

Sorry we blocked the boat

Saturday morning it was changeover as usual and another full house, last weeks guests had a fantastic week despite the water restrictions and nearly wall to wall sunshine. This Saturday torrential rain, wetting the duvets that L had painstakingly put together on Friday, just another hiccup. Once the downpour passed it became very pleasant, the guests were bored over at Big Harbour waiting for their cottages so they made their way over but were happy to sit taking in the view from their cottage until we finished. 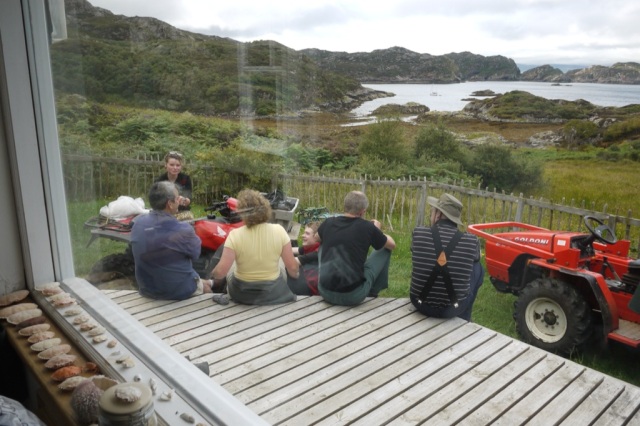 Going back and fore with luggage, water and all the Saturday stuff I was amused to see the Yachties of off Yacht Full Moon and others standing at the top of the hill with their massed iPhones, the saviour of the yachting race. It also amuses me when older yachtsmen and women complain about ‘The Development of Rona’!!! and then almost simultaneously ask ‘where’s the wifi’????? Almost a weekly occurrence.

Calum helped with the changeover after being abandoned by his wife Irene who had to go back with K&P to babysit, we had a pretty full day at the electrical wiring, water supply and even some stalking. Later we were happy to sit in the wheelhouse of MV Kestrel for the debrief. The sun shone and the beers were good not to mention the ‘Whyte and MacKay’. 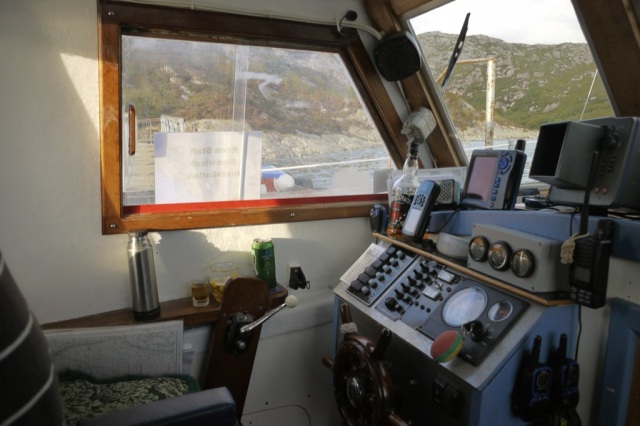 Calum took off early, passing Minke Whales and porpoises en route. I got up and finished off the water to the larder, for once it went well with no leaks but plenty midgies in the forest where the treatment shed is situated. 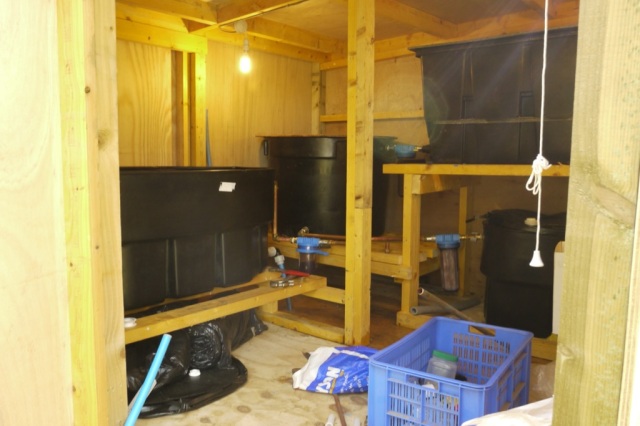 After months of looking at my Wayfarer dinghy I decided to sell it but needed to try it out in case of leaks. The dinghy suffered major damage last Autumn but I repaired it and as I say had decided to sell it. So off I went in the light breeze not before getting frustrated at the time it takes to set it all up. BUT once out there it became very therapeutic sailing around, very peaceful. I returned back to base deciding not to sell it. Hopefully I’ll get more than one day a year on it.

I was toodling round the bay and spotted kayakers up in the gut behind Rona lodge. Last year three numpties had a huge bonfire going there with trees cut down and rubbish everywhere. The day before Glenshiel/Torridon went up in flames. I couldn’t believe it and the fire was on the grass. So I asked them to tidy up and leave politely but since then I get very anxious when I see campers in this midgie area. So I got on the bike and paid them a visit. I got the usual look from them ‘oh ho here we go’ but I was very pleasant and explained my concerns. It was a Father and Daughter all the way from Gloucester, he being originally from Glasgow. They were happy to be in the West and when he told me he was RAF I asked him kindly to ask the pilot in the Tornado to stop buzzing our house!! He even showed me his plastic bag for removing their waste, a proper kayaker unlike the bin bag fairy that visits Raasay but has been known to mysteriously drop in here!!

I got back to the Lodge to find the crew off Yacht Acarius’ at the door paying their mooring fee and looking for milk, it turned out they were from Gloucester too.

That’s all for this morning, I’m off to check the water, we need a new reservoir so I’d better find out about that before we make one, I seem to remember my neighbour Paul life at the end of the Road getting grief for having stolen his own water to give him some power, don’t want to upset the jobsworths do we!!