Back to blogging with the new lap top

It has been a busy week here on Rona, we have had Dave our computer fixer and lots of visitors. Finding time to blog with all the upheaval has been impossible. Anyway here is an update of what is going on.

Wednesday 4th July, after a full on day yesterday same again to-day. PC work at last and getting to know the new Mac was followed by a trip out on the MV Rona. The weather turned a wee bit grey then very cold as we fished down at the gap between Raasay and Rona, in fact our breath hung in the air. We caught a couple of buckets of mackerel then headed into the Sound to lift a few creels. The sun came out and the temperature hit 25 degrees almost immediately, very strange. In fact when we got back everyone was commenting on how hot it had become. Seems I did not keep my photos of the fishing, ah well plenty more days out to report!! Found them!!

Fay and the boys fishing

Thursday 5th, what a difference a day makes. Woke up this morning to thick fog which persisted all day. we had an odd light period but all in all it was a wall to wall fog.

It did not stop some departures or arrivals, the MV Seaflower arrived with day trippers and it was a pity it was so foggy because Minke Whales and Dolphins had been spotted all around. Later in the day Ian Maclaren Yacht Trillion arrived having sailed in thick fog/100 metres visibility from Lochbay on the West side of Skye. Almost immediately Yacht Wapiti with Menno, Janie and Lottie arrived again travelling through the fog. Since it hads been several years since we had seen them both we invited them to tea, a good nights entertainment was enjoyed catching up on old times and having potted crab, herrings on oatcakes, beetroot brownies and home made ice cream. It was only decided on a snack but it turned into a meal.

Friday 6th, again what a difference a day makes. We woke to glorious sunshine with the odd wisp of fog. Very warm again and a bay full of yachts, 7 in all, lots of coming and going as stranded yachts made off. With the week running away from us it was head down and deciding what to do with our images web site, our blog and the Rona web site. I’ve decided to close the images one as the technology was ancient (Windows Frontpage bought for over £240.00,  6 or 7 years ago, now obsolete!!). We’ll have more of my images on the photo page once I get the blog up to date and Dave advises changing the name of the blog, we’ll see!! It was a hectic morning with visitors again then we decided to escape up to the summer cabin we are putting in the woods. It is a day cabin where we can get away from the house for a while and has been a few years in the planning. It is quite simple and basically a garden shed, but the view is stunning. 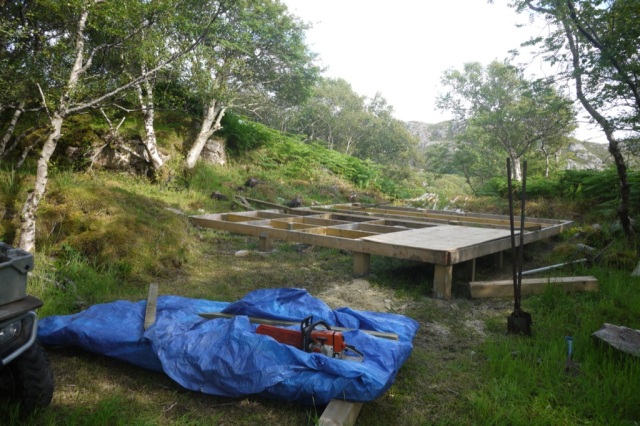 Hopefully next week I’ll get a start proper and move it forward a bit. As with all Rona projects we are at the mercy of supplies and other interruptions and this is no different. But once it is finished it will be a very quiet spot to sit and enjoy the view. After 5 o’clock I got a text asking for some crab for Saturday from Yacht Escapade, Nick Webster. So we shot out in the boat, lifted a few creels got a crab or two and were pretty much tossed about in the huge swell building from the North. We got back and told the Yacht on the mooring to move on Saturday as Escapade had booked it. On returning to the house I got another text from Nick reminding me it was a week Saturday so our mad dash to get shellfish was not necessary BUT we would not have enjoyed the lovely (after the fog) view of the Trotternish ridge.

The forecast for Saturday was not promising so we headed off to bed in anticipation of a long day Saturday.

Saturday 7th, We got up sharp, Dave was heading off with Fay and her two boys on MV Spindrift. They were having their third visit to Rona and promising to come back. It was good to see them but we thought they would have another day here (or two) because there was a very strong wind and huge swell. Emma and James, who were coming to Rona on honeymoon called as they could see huge waves crashing on the Head. At that moment the MV Spindrift came alongside the Portree pier and I said that Kevin must have decided to go. I suggested they look at the next hour like a trip to Alton Towers!! They got here at the usual time a little white but James was very excited and was hoping for the same again next Saturday, I hope he’s disappointed, green water everywhere is not good. However it was the right decision because it is still stormy as I write this and a miserable Sunday. As that was happening we were busy watching the ‘dodgems’, anchors put down on a very calm night were tested the next night as the wind strengthened. Several re-anchored and at one stage it was pretty dodgy!!!!

They all got sorted but one yacht lost its outboard, it flipped on the dinghy in the wind and dropped off. I know where it is!!!! Later in the day yachts started to arrive and even in bad seas we had 9 yachts in. Once we got things sorted out it was good to chill out with a bottle of wine and catch up with a night at the box.

Sunday 9th July, just for a change we invited Peter, Menno and Janie up for lunch so a morning preparing was followed by a lovely traditional Sunday lunch and the odd visit to the tv to see how Andy was doing, tough luck I guess. We’re looking forward to a catch up next week and visitors resume next Thursday, Nicky and Ian are coming to learn the changeover.