You Must Try This

Mix the dry ingredients then add one egg, a half pint of buttermilk (we’ve used a mix of beer!! milk or even yoghurt).

The mix is wet that’s no problem, butter the loaf tin to make it easier to extract, good luck.

This recipe was requested by my good friend Julia in Inverness, previously a resident of Eilean Tighe, Raasay and our best supporter.

To-day Lorraine made one of these loaves to go with the Cullen Skink, that was the easy dinner because we had a Monday ferry. Kevin and Pam were over with a load of timber and to pick up Alan who was doing his Woodland Survey Work.

It was handy to get the timber over and good of P&K to deliver. We’ll use it to shore up the ruin that Mike stabilised and the new summer house. We’re looking forward to making a start hopefully next week. In the meantime we had a bit of larder work to do before we got ready for a trip to Inverness. we were going tonight but it was a bit too breezy. I pulled a muscle weeks ago and it will not repair. So 4 hours of cutting up a carcase was quite pleasant as the sun came out and brightened up the day. We were interrupted by two French Yachties looking for venison and fish, later 3 more came ashore, their first time on Rona and they were very cheery, I think the sun helped. Later we tidied up and froze down our half days work. First thing tomorrow early start fingers crossed for a calm day. 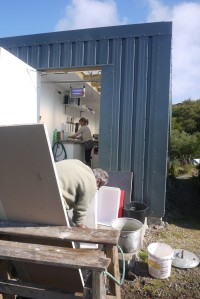 I've been living on the island since April 2002, alone for the first 5 years, my partner L joined me in 2007. We manage the Island for a Danish family who bought the Island in the early 90's. Their hopes for the Island are to make it self sufficient supporting its inhabitants and that is where we come in. We look after the stock, 3 holiday cottages, machinery, boat and of course the visitors. It is pretty challenging but it is a beautiful place to live and work, we love it and strangely enough we love it even more in the depths of winter when all is quiet apart from the gales and rain. We do a bit of fishing, stock work, stalking deer and loads of other stuff. We have good support from lots of people whom we have met over the years and have become involved in the Island. Too many to mention here but keep an eye on the blog, they'll be there for sure in the future.
View all posts by Bill Cowie →
This entry was posted in Daily Doings, Yachties. Bookmark the permalink.