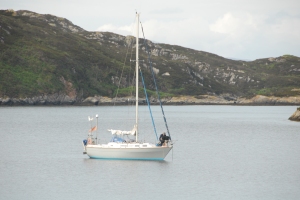 Yacht Gannet left this morning, three days they were here. Everyone they met they told them how the did not like what was happening here funny how they stayed, walked everywhere on the path used the pontoon, very strange, all I can say is see you around!!!!

On to better things, changeover to-day but no changeover. George is coming, not the cat his namesake and Calum and Irene from Portree. Geo’ arrived at 10am, C n I arrived shortly after. The guests on MV Spindrift heading home were accompanied by 50 dolphins, no pictures so far. Just them leaving. 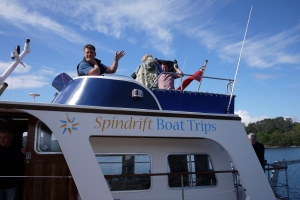 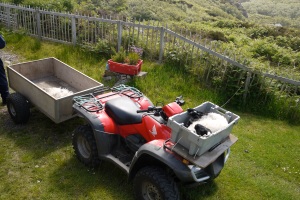 The first job was removing the escapee sheep from Dry harbour, they had made it there during the night. We caught them quite easily then tied them in and returned them to base. We’ll have to work out a strategy for keeping them in, because they are becoming a pest. 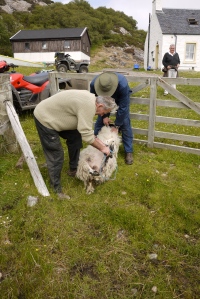 In the middle of it all Bob Bradfield who is studying and mapping harbours in Scotland, Antares Charts. He had a framed map of Acarseid Mhor to hang in the utility room as suggested by Moira and Malcolm of off ‘Yacht Feshie’. Many thanks Bob. We had a very interesting time talking about his involvement in Gypsy Moth and the odd disaster which they had to deal with. 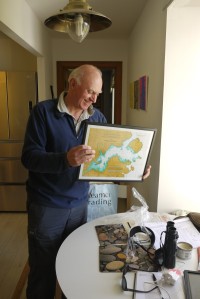 After that we headed out with Calum and Irene to look for stags in the South end of Rona. Quite a muggy, foggy day it was down there and of course the Black Backs gave us away but we did see some. We returned to Big Harbour to find the lochCarron yachts rafted up and starting their birthday celebrations. Looks like a busy night, at the last count we had 9 yachts/motor sailors in. A normal June night.

I've been living on the island since April 2002, alone for the first 5 years, my partner L joined me in 2007. We manage the Island for a Danish family who bought the Island in the early 90's. Their hopes for the Island are to make it self sufficient supporting its inhabitants and that is where we come in. We look after the stock, 3 holiday cottages, machinery, boat and of course the visitors. It is pretty challenging but it is a beautiful place to live and work, we love it and strangely enough we love it even more in the depths of winter when all is quiet apart from the gales and rain. We do a bit of fishing, stock work, stalking deer and loads of other stuff. We have good support from lots of people whom we have met over the years and have become involved in the Island. Too many to mention here but keep an eye on the blog, they'll be there for sure in the future.
View all posts by Bill Cowie →
This entry was posted in Daily Doings, Wildlife, Yachties. Bookmark the permalink.