Well it is the first big one of this year, all the more scary because we did not have one last year in the New House. Yes, certainly very strong winds and gales but nothing like this. So it was a new experience all day Tuesday and night.  Sitting ‘trying’ to watch Tv the entertainment really was watching the windows bending in and out with each gust that hit us. The house was relatively quiet, the wind was howling. Around 8.30pm I heard ‘something’. In the past that would say to me, you will need to go and look around tomorrow because ‘something’ has happened. That ‘something’ was the wood store and sheep shed down at the shore. A low lying almost flat roofed ruin we had renovated over years and roofed in 2016. So it had already stood up to some serious wind so it was a surprise on Wednesday morning to see the roof gone, at first I could not see the debris but then it appeared about 60 to 80 yards away in line with the new house in the hollows. Thankfully it did not get here but it is a sobering thought to think that it could have hit the house. 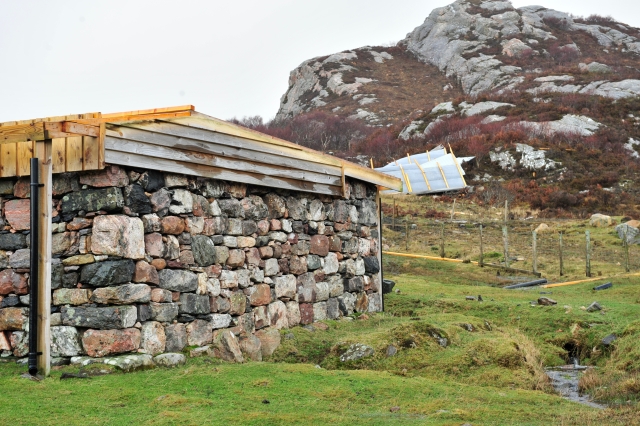 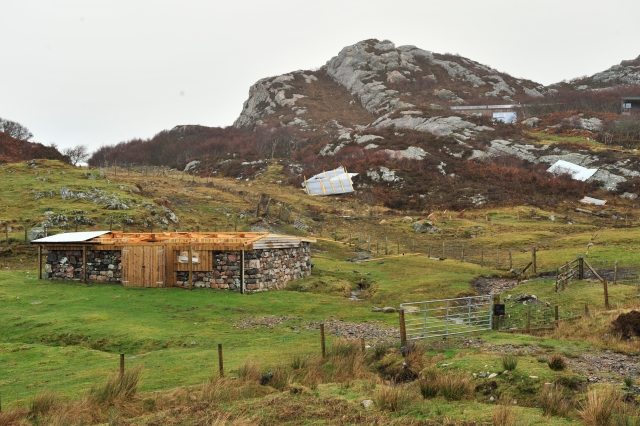 As I write the wind is hammering the house yet again and the forecast is not too bright but it will pass for sure and we can then get to the job of repairing it.

The Last Day Of The Year

Back to the day job though and this was Hogmany, a perfect day to be out on the hill looking for hinds to reach our cull target but the hinds won that day, it was just good to be out though. No need to shoot anything and a pleasant way to spend the last few hours of 2019.

We had a few real colourful sunrises up until the weather broke and we were just thinking how good a winter we are having, when………………..

We started to see the signs that we were in for some rough days ahead. 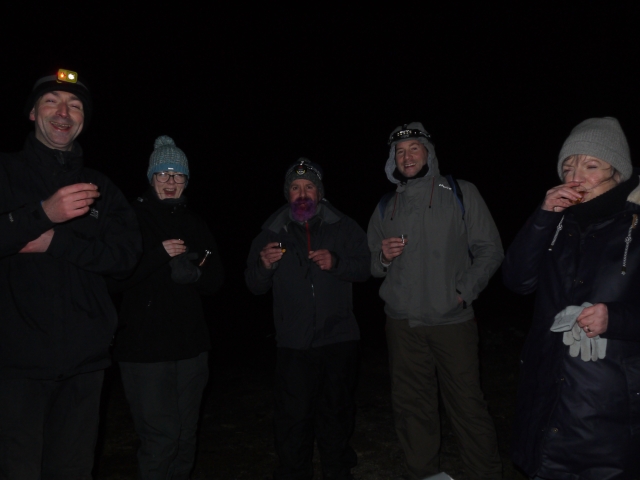 Our New Year visitors got off thankfully the Saturday, they had had an interesting trip over with a pretty stormy crossing the previous Saturday but Hogmany up at the top of the hill was as usual a windy cool one, well lubricated though. So when Saturday 4th arrived it was a bit of a relief to see that they would get off and on a relatively calm crossing, always sad to see our regulars leaving but back to work it is. 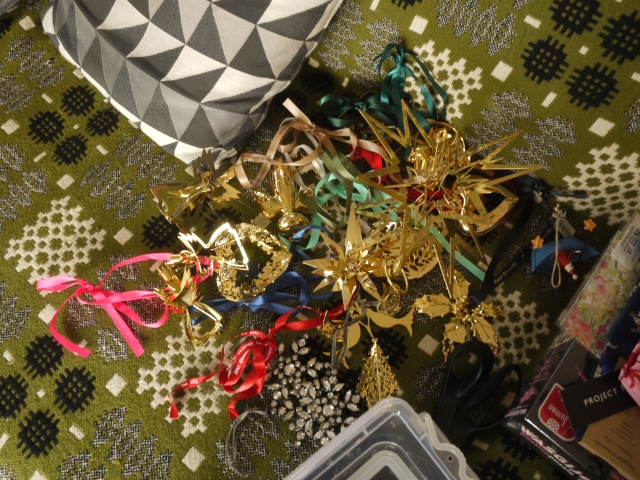 Christmas decorations down, a new year ahead, I’m sure many challenges and the weather just one of them.

We get the full picture up here in the new house and in the last year we have had some pretty strong gales, the windows flex at an alarming rate when the gusts hit them but we are assured that they will withstand a ‘serious’ wind speed. BUT it is the gusts that worry me!! 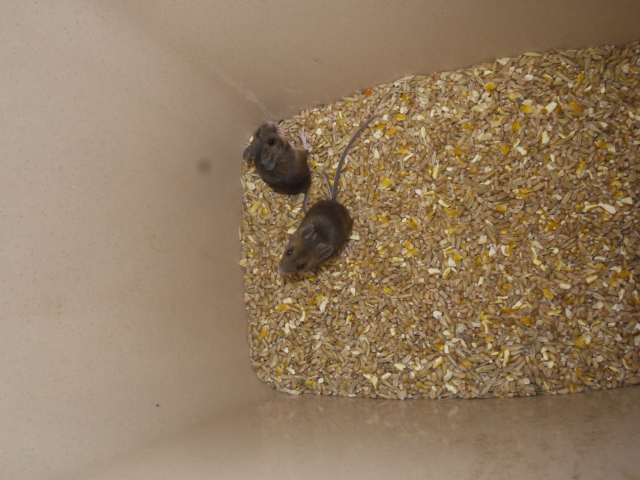 The regular jobs keep us busy, feeding the sheep and hens but we often at this time have other visitors to attend to, Mink for sure are a serious issue and the traps have been busy with them. But it seems they are not so busy that the mice are suffering, there have been quite a few helping themselves to the chicken feed. These two were given a reprieve!!!

A wee break in the weather allows some badly needed house maintenance. With the new house build our eye was off the ball with cottage maintenance . But, the weather was not helpful these past two years with no real good weeks of weather when the cottages were empty to catch up on the ongoing schedule, jobs like this were hard to get done. 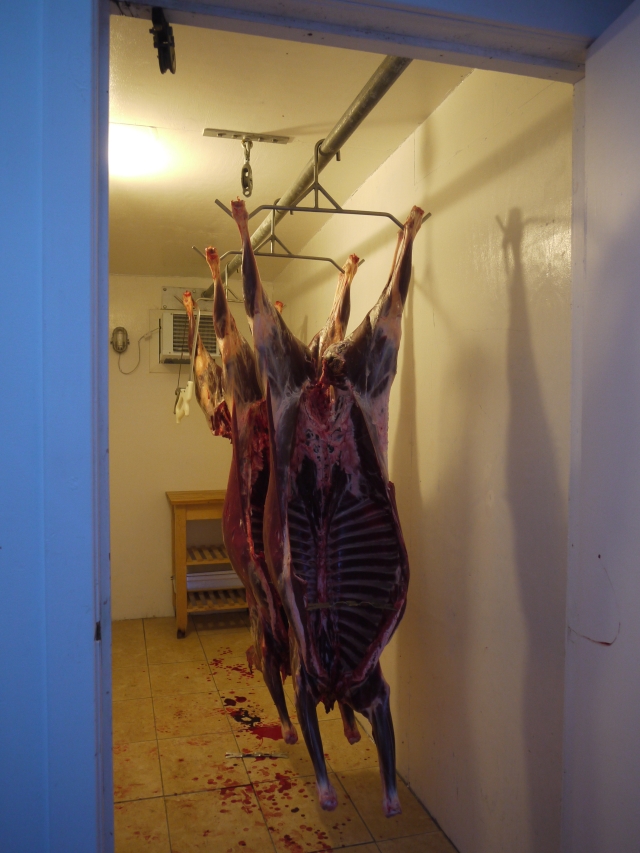 We have a certain amount of Hinds to cull and it is easy to get complacent after a long summer when the season opens so it is good to get ahead of the game. But three hinds means days of butchering, a good job listening to the radio, working away with  the wind and rain outside.

I see that I have a half finished blog in the file, it was just before Hogmany when I noticed the power ‘flickering’ in the house. A quick check in the morning told me that the windmill had an issue. 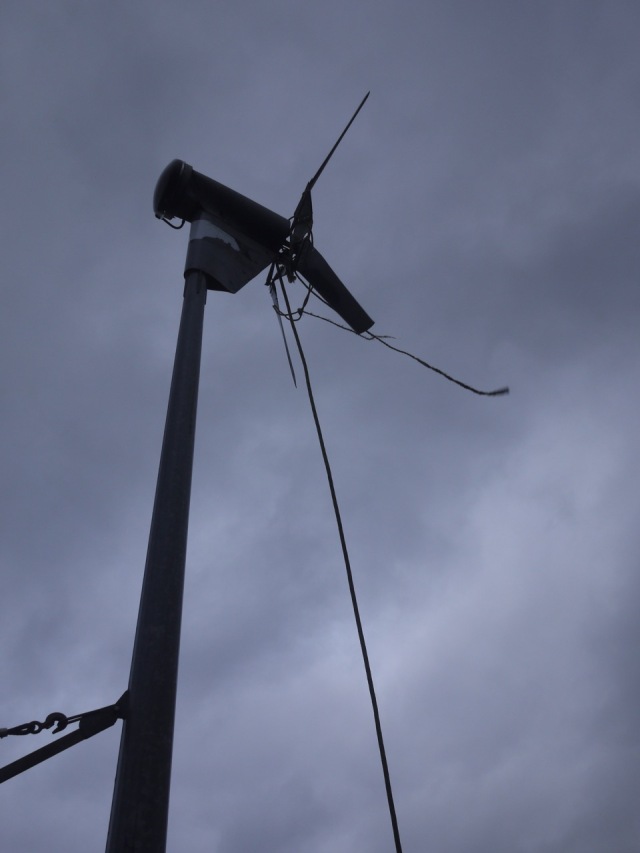 With no brake to stop it in high wind (since new) I had to resort to the dodgy tactic of throwing a rope into the blades, thankfully no damage with that but it was apparent that the windmill was out of balance and if left to its own devices it would shake itself apart.

A spring bracket had broken throwing the balance off, I had spares but could not put the windmill up until it was calm. Thankfully next day in between the gusts I got it fixed and up to speed again. 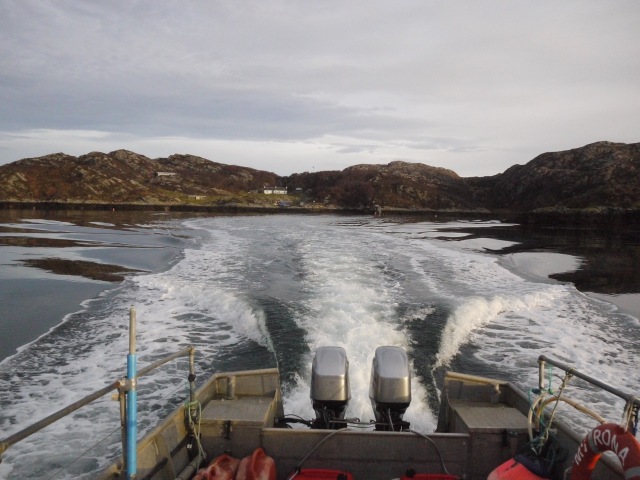 I see too that I went to Portree Boxing Day so the weather then was pretty settled. In fact we had a landing craft in December with fuel which is the latest we have ever had a fuel run. But a good chance to get the scrap off, interesting loading. 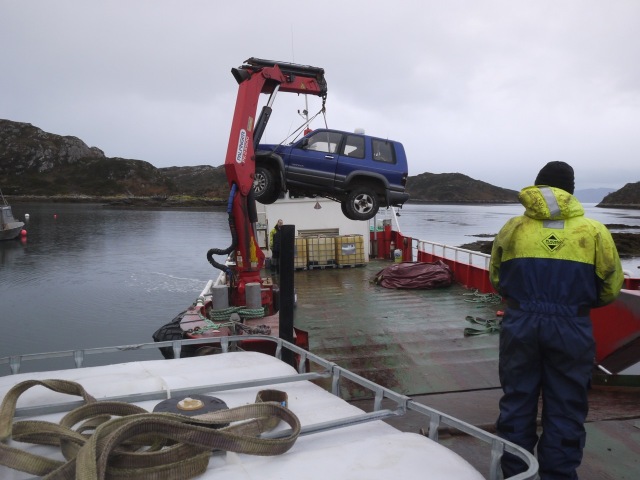 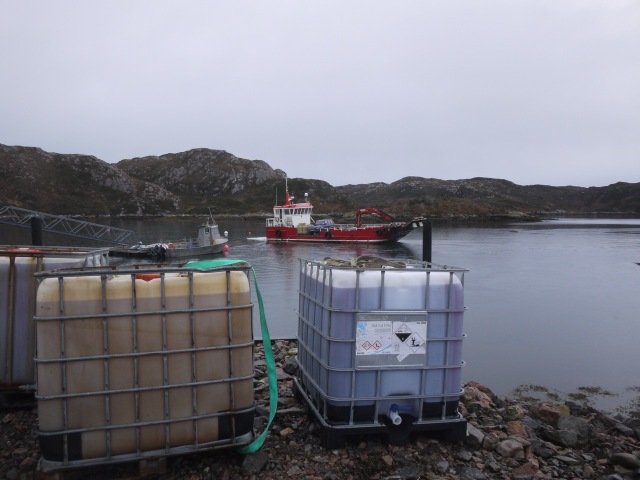 I also see that we ‘found’ a couple of bottles of Whisky in the boxes up in the loft, a good Christmas present.

Finally matching luggage takes on a new meaning from Lee our good friend and regular visitor!!!!! 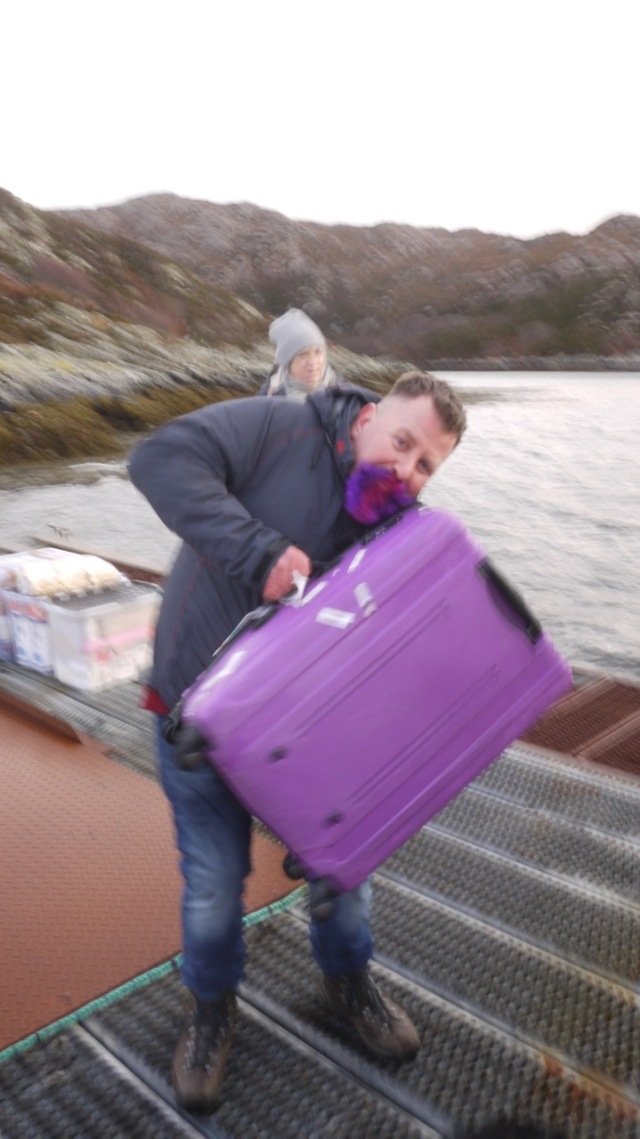