OOPS!!!! I’ve just discovered that this blog post from a month ago has not been posted, maybe something to do with our internet being down. Both Applnet and satelitte gave up the ghost at the same time. Applnet with reconfiguration taking forever and I hear it may go off again to-day, hope not. AB Internet our satelitte provider has gone out of business so we still have a slower link direct with Avanti but for how long……….. That is my excuse, but here goes, the news from a month ago.

Well it has been a while, that’s because we’ve been flat out with the new house. However, life goes on around us and we have to deal with it. First moan!!!! Drones have their place I guess but for us here not on Rona. Why you would want to come to a peaceful, remote harbour and have this irritating machine buzzing about is quite beyond my comprehension. Especially with the best year yet for nesting birds, in fact 10 feet from this Drone Pilot there was a gull sitting on eggs. It was bombing this guy and he was still going to fly his drone.

But on the next tide Angus and John our yachting friends arrived and as usual mucked in with whatever we were doing, in this case trying to keep the timber dry.

Moan no 2: We have signs up, “construction Site Keep Out” etc etc, but these guys ignored them, walked onto our building site and told us that they don’t read signs, they ignore them and they were  “just having a Look’!! ‘We’re doing no harm’. Okay so now we have completely closed down because we cannot deal with people wandering all over the site ‘just to have a look’. Well done Yacht ‘State O’chassis?’ Clyde Cruising Club. 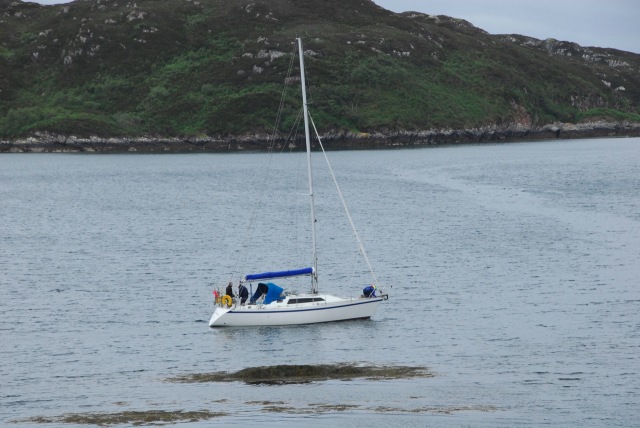 Back to the real world, water woes. I was having problems with the water supply, using loads of filters and could not work it out.

Temporary in line filters were quickly blackened with the rain messing up the peat in the water.

Then I noticed the sheep trough overflowing, one of the sheep had pushed the ballcock in and the trough had been ‘leaking’ for days.

Here’s The Problem and Not the First Time

But it was a while before it settled. 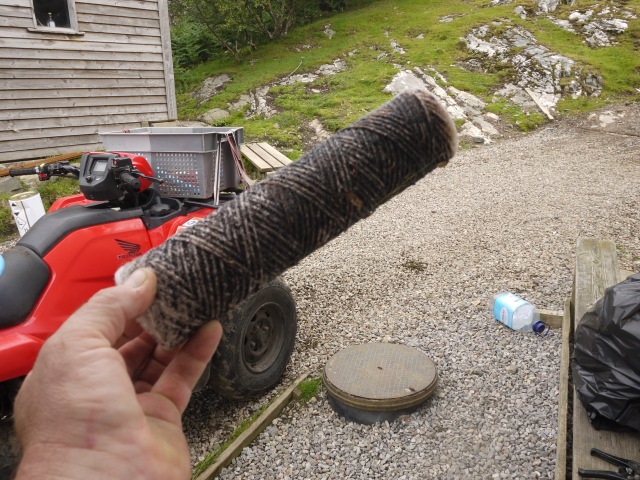 Yachts had been scarce but that was more to do with the weather rather  than the fact we are now closed.

Although it has been unsettled there have been good days.

Nature At its Best

It is normally me that suffers breakdowns (Central heating pump to-day) so it was quite an event when the Spanish John delivering his third load suffered a burst hydraulic hose, quite an event to see someone else in trouble.

Hugh had been over but after the work got up to date he had to go off to deal with other jobs. A quick run to Arinish and he was on his way.

Next day I thought I’d take an hour out and check the creels, nothing in them except a very fat octopus. Been a while since I lifted them.

A quick run down to the end of Rona and to see if any stags were about, I was not disappointed.

Back to Rona and a check up the gut to the East of the house and here was a couple of yachties? camping. They had come in in the teeth of the gale the previous night and spent the next calm day on Rona. Would have been nice if they had come to the Lodge to say hello, maybe told us they were ‘Wild Camping’ just over the back of Rona Lodge!!!!!! 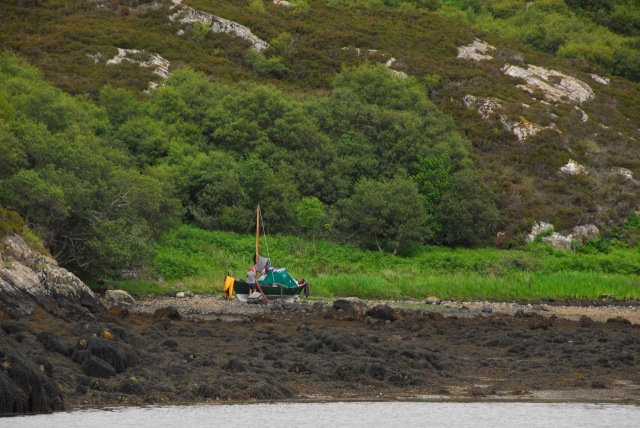 Anyway, back to the Drone. Here’s our hopeful gull sitting on eggs. 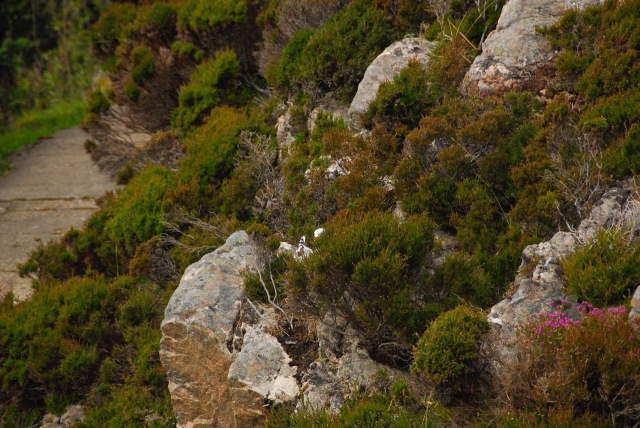 10 feet from where the drone pilot was playing with his toy.

Our Nesting Gull, Droned out.

Sadly after four weeks of sitting and bombing people here eggs were rotten.

Just as I suspected, too much disturbance but top be honest not the most ideal place for a nest.

Twice in One Day

On a brighter note on a beautiful day I had the pleasure of two trips to Portree. Quiet until 10am, but when I went back around lunch time it was like Blackpool on a Saturday afternoon, busy, that’s not the word to describe it. Mobbed maybe. 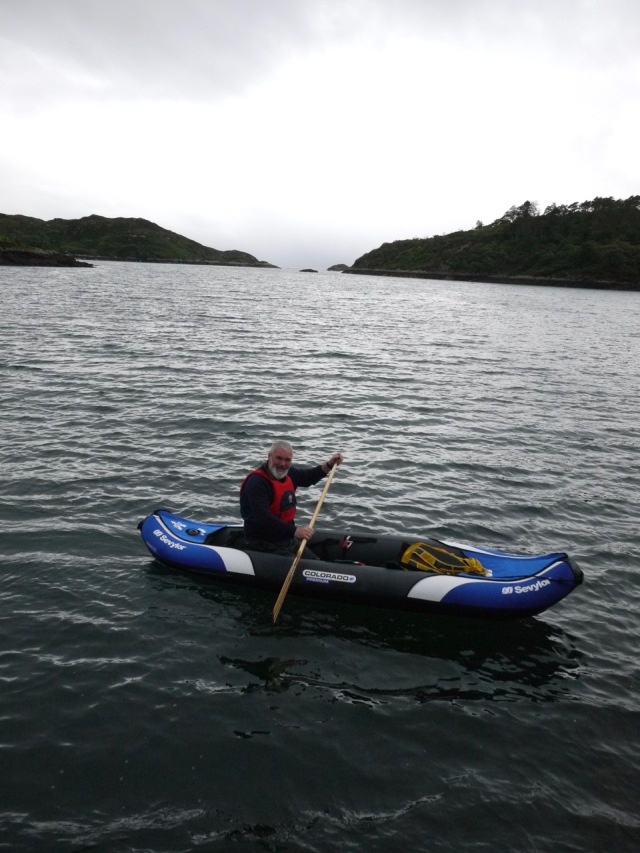 Back to Rona, next day Kevin and Pam arrived back from MacDuff, freshly painted after being on the slip there for a week or so. They had a lively trip back especially round the top of Scotland!! 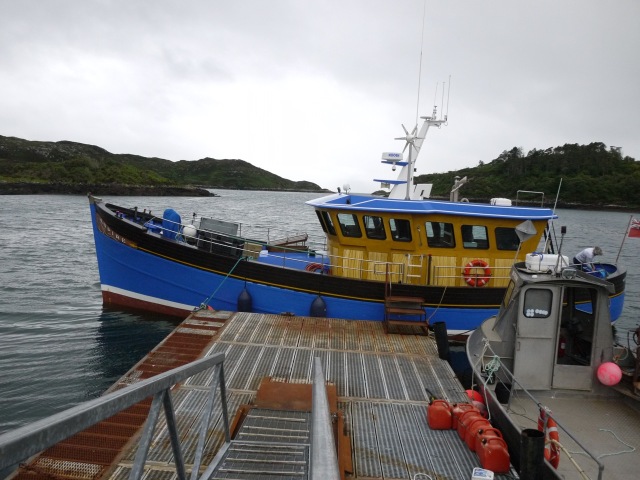 The boat is looking well and we were very happy to see her back.

This is the bit of the blog where I discovered that I had not posted it DOH! So I’m now having to look back and see what happened. The polytunnel is now like a jungle but not with weeds, more cabbage and kale, great though.

The water I have to report is working well which should stand us in good stead for the new house and extra usage.

This is where I finished the blog a month ago, with Yacht ‘Glance’ on the mooring. Good to see Isobel back with her 100+ year old yacht a real classic.