Long Sunny Days and Too Much To Do.

It has been a good month overall, glorious sunshine day after day and lots achieved. So busy that I find it difficult to put aside some time for a blog post. So, I’ve decided on a different tack. I think I’ll upload photos daily possibly without much writing, the photos are easy it is the story that backs up. 53 photos uploaded to-day but it has been a while since the last blog. We’ll see how it goes.

The deer are about feeding during the day just now, they are looking pretty scruffy as they shed their winter coats.

Although in a week or so with the good flush of grass they will certainly look a lot better, they have wintered well. 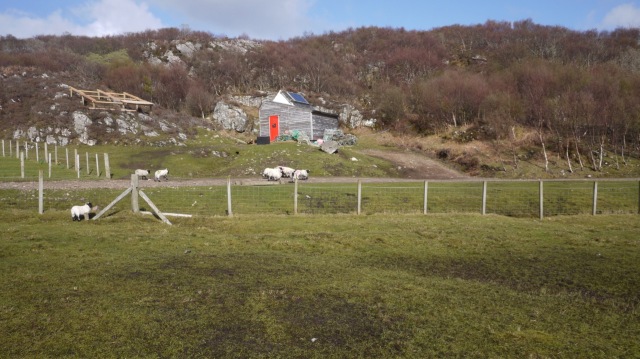 Lots of jobs piling up pre’ the first landing craft this year. New power for the new house is the first consideration.

OKAY, It is a little squint!

We decided on timber for the solar array as the steel was getting pricey, although when I was doing this I sometimes wished I had gone with the steel. 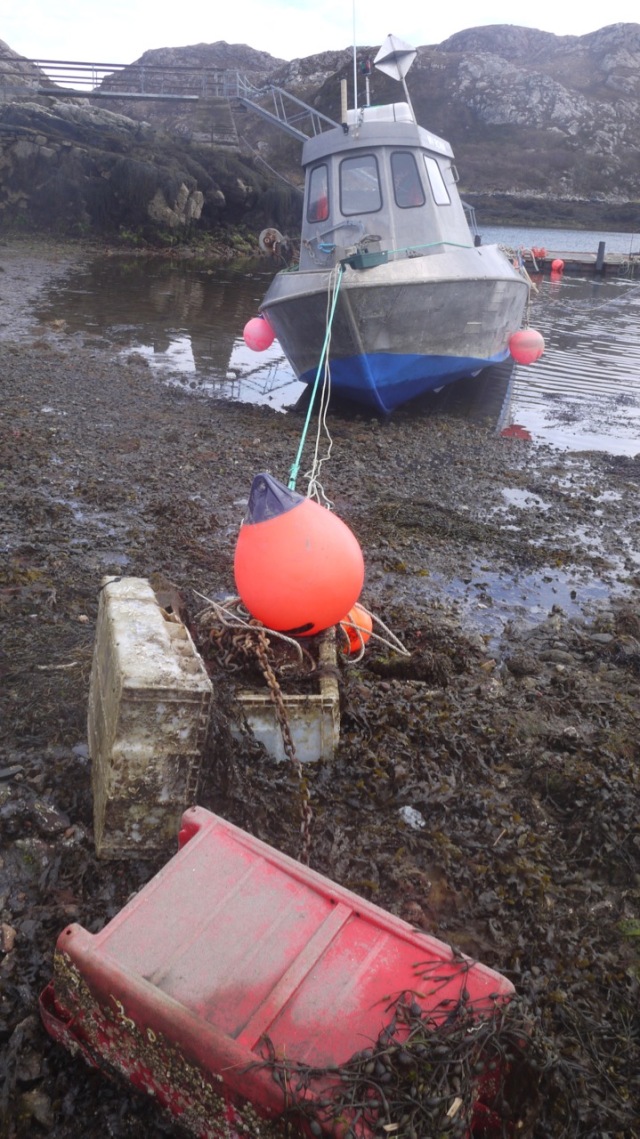 Another tick off the list, old concrete used up for a mooring. Over at the forest this mooring will be handy for running a line ashore for the firewood retrieval in the future. A bit of a mission but it is now there, just hope a yachtie does not pick it up!!

Getting ready for the landing craft, just about there and a hydraulic pipe burst. No problems with the tractor since we bought it years ago but now three rotten pipes!!! Just when I need it most.

A wee bit of Ingenuity

After struggling with the JCB pump last month, I called the Goldoni dealers for suggestions on removing the steering wheel and he suggested manufacturing a tool. Works too.

The start of the month saw a Sunday ferry bringing Craig and Laina (plus dogs) to give us a hand for week or so and in the future. 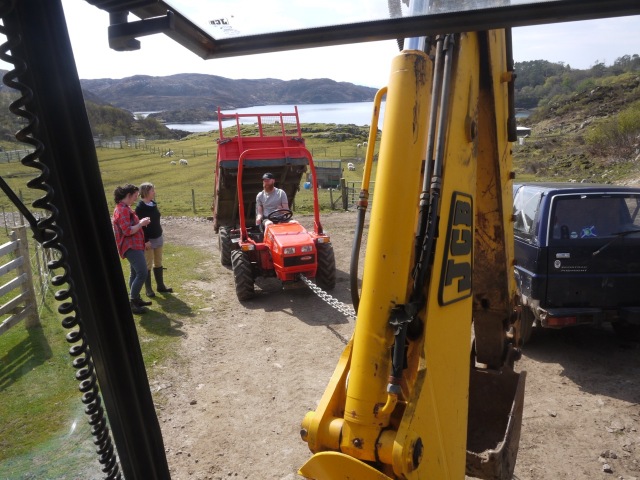 First job for Craig a scary tow up the hill.

First things first, get the tractor off the shore.

The Polytunnel Is Getting resurrected

Next job fixing the bits and pieces with a view at the end of the week to getting the plastic onto the polytunnel. The roll of plastic has only been here for over a year!! But with sunshine forecast the pressure was on to get it fitted. 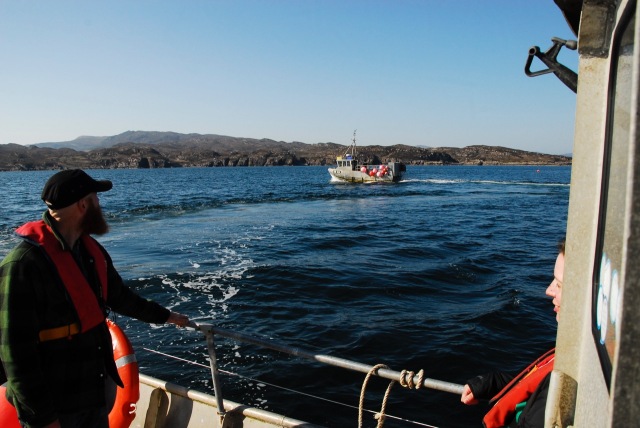 Stopped For a Blether

The landingcraft was on its way and we had arranged to pick up Hugh at Arinish, on the way down we spotted Jaqui B and stopped for a blether and maybe a chance of some squatties.

Hugh was off the boat and onto the JCB in double quick time to level off a rocky bit we had had issues with in the past when unloading. 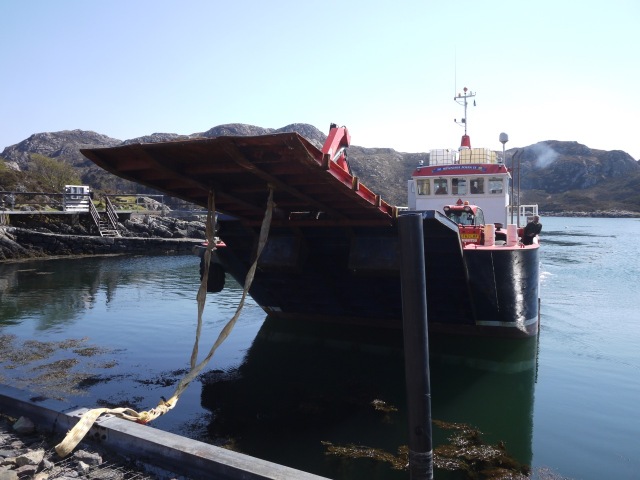 First Load Of the Spanish John

With the tractor out of action we had asked Greg to take his Manitou/forklift to help unload, a great tool. 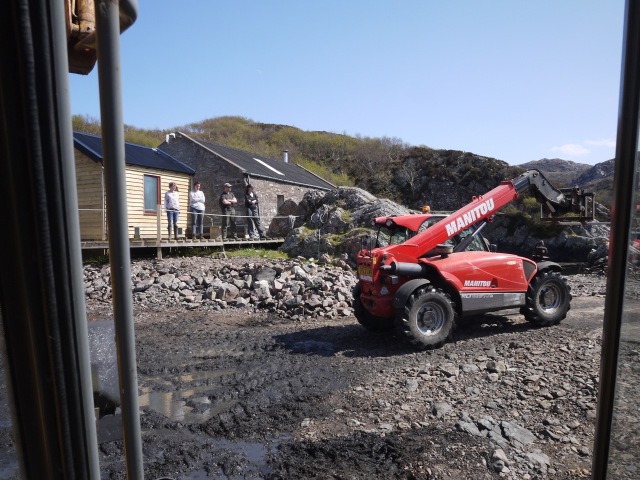 It was a bit warm and the lens of the camera got misted up, must have been the speed we unloaded the boat!!

Got a bit warm here.

Very quickly with the boat unloaded, empties were aboard and they were on their way.

A quick lunch on the decking of the bunkhouse then it was back to Raasay with Hugh.

Passing ‘Eda Frantzen’ on the way out of the harbour. 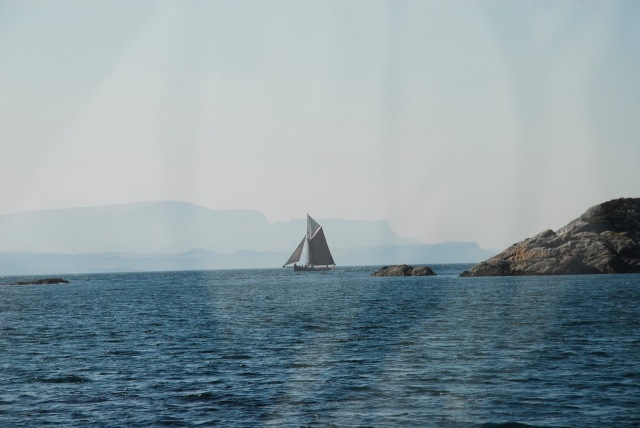 No Surprise The Yachts Were Here.

4 In The day of the landing craft

First thing next morning we had a yachtsman at the door, his engine would not start and he had been having problems. With no wind there was nothing for it but to call Hamish and the crew (through Stornoway Coastgaurd) to see if they could help.

No Joy With The Engine 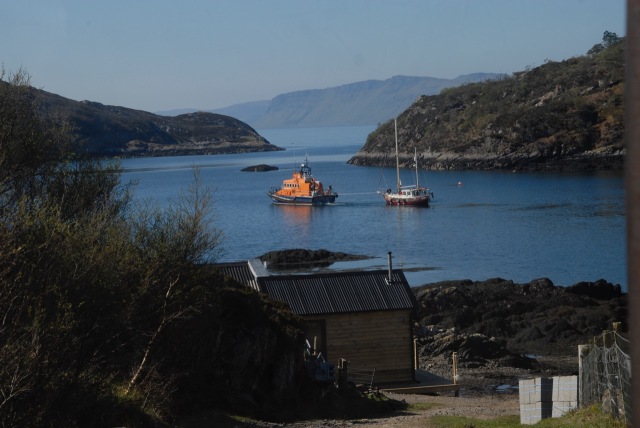 They got Hooked Up

And they were on their way.

Back to the day job.

We had to put all the material from the landing craft away.

The pallets the blocks come on will not travel. Usually they go on the tractor, not this time.

Then Fuel To Dry Harbour

With the sun still shining it was time to fit the solar array, pity it was not up in this weather. 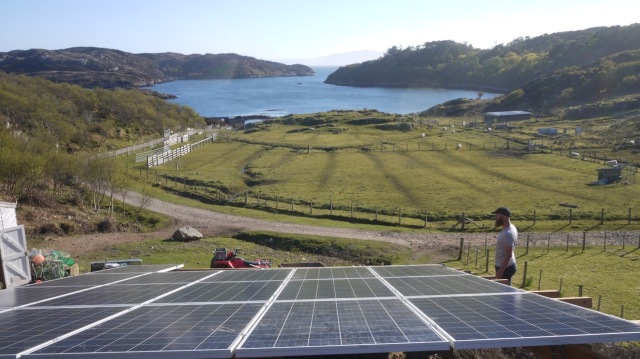 At the end of the day an invite to Dry Harbour for tea was gratefully accepted.

Friday we finally got the plastic fitted, in a very blustery wind which made for an interesting install.

Almost ready for the Gardeners coming. 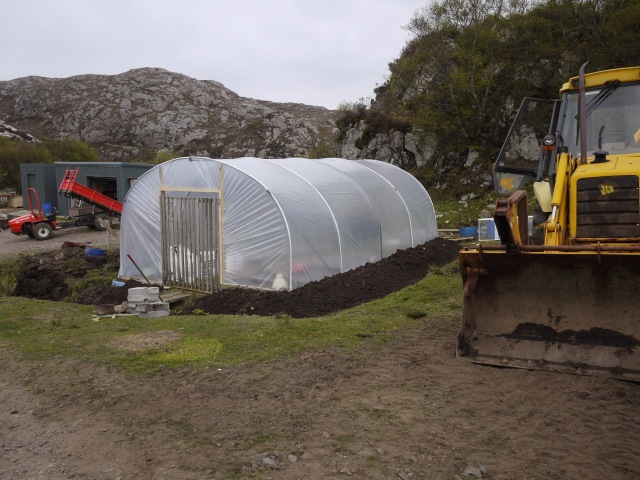 Hugh (Scoraig Wind), was coming, he has been promoting solar for years and we had finally gone for it in preference to a new generator. Saturday our cottage guests arrived and departed with some of the cable and fittings.

And was quickly getting down to the job. 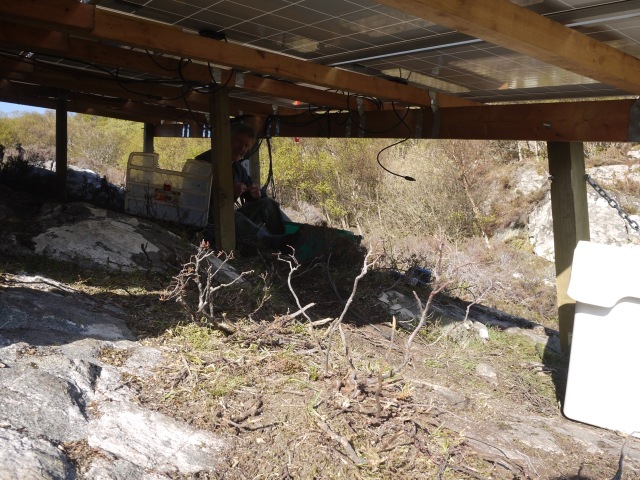 Fitting The Panels Together

Of course the old system had to be stripped out first.

In the middle of it Paul from Arinish arrived with the mink traps we had lent him.

Up From The End Of The Road

He was interested in our installation and we had a good chat about each others systems. Good to see him and Ross.

The Last Day Of Sun For A While

Hugh duly finished the install and the sun shone but the forecast was of course for grey overcast and rain.

Next Morning and it was up early over to Dry Harbour and we installed the Big Harbour system there to boost the power. With the ferry coming there was a bit of pressure on but Hugh managed admirably and the system was running fine when I checked next day.

Some of our hens are not laying, some have died and much to Lorraine’s apprehension I ordered 4 new ones from Donald at Struan, they looked good after their journey over the sea. 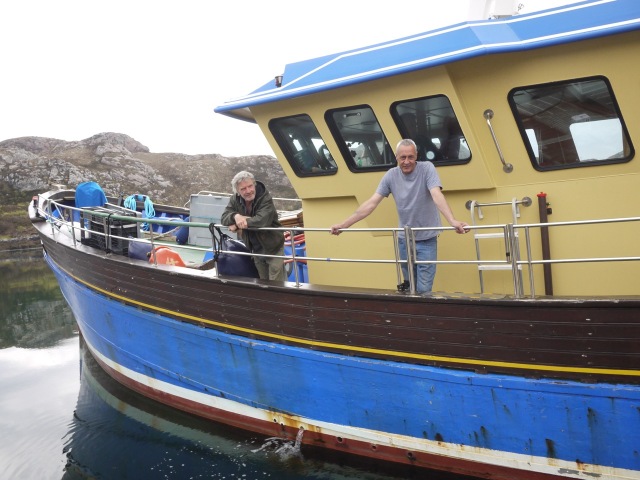 I’m sure Hugh was glad to be on the boat and heading home, it was a pretty full on day and a hint of days to come. 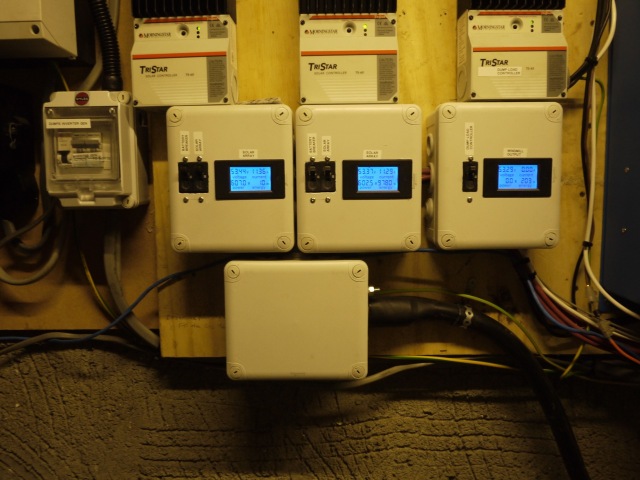 Performing Well Despite the Cloud

So now we have a new system, the weather: flat calm and grey. BUT the generator has not run, the washing has been done, the hair dryer used!! This is all very good and to-day the volts are up big time, sitting at 60v just now, excellent.

Nothing left for it now but to enjoy the visitors for a few months plus build a house. Here we have a few trying to figure out our signs!!!

And just like the mainland one of the first questions ” where’s the WiFi”?

The Tidy Up Continues.

What is left in the short term before we start our house build is to clean up the winter damage/rubbish and get the stores and stocks ready for the summer invasion. It is all go, ditching, firewood and a hundred other things.

Now to The House Build:

With the first load of material arriving we are up two gears now and the bits and pieces are coming together. Now all that is left is to get it here together. First thing is the steel work for the ring beam. Fabricated by MacKays Engineering Invergordon, this piece is key:

I've been living on the island since April 2002, alone for the first 5 years, my partner L joined me in 2007. We manage the Island for a Danish family who bought the Island in the early 90's. Their hopes for the Island are to make it self sufficient supporting its inhabitants and that is where we come in. We look after the stock, 3 holiday cottages, machinery, boat and of course the visitors. It is pretty challenging but it is a beautiful place to live and work, we love it and strangely enough we love it even more in the depths of winter when all is quiet apart from the gales and rain. We do a bit of fishing, stock work, stalking deer and loads of other stuff. We have good support from lots of people whom we have met over the years and have become involved in the Island. Too many to mention here but keep an eye on the blog, they'll be there for sure in the future.
View all posts by Bill Cowie →
This entry was posted in Books, Daily Doings, The Views and of course the weather, Yachties. Bookmark the permalink.