To-day, after a week of 20+ degrees heat and sun it is another day at the coalface of Rona. 7am this morning it started: This is the way it was, more about last week later but here is a day in the life of us………At last the the landing craft, The Spanish John, was coming from Mallaig. The digger and building material was on board ready to make a start on the new road/house.

Saturday night only one yacht in, it was nice and quiet before the busy day ahead. A nice couple on the yacht,they came up to the house paid their mooring fee bought venison and headed off, Yacht Suzalah? Now on their way to Harris.

Getting Ready For the Landing Craft 1

Busy morning getting organised, first thing gathering together the bits and pieces for the landing craft. 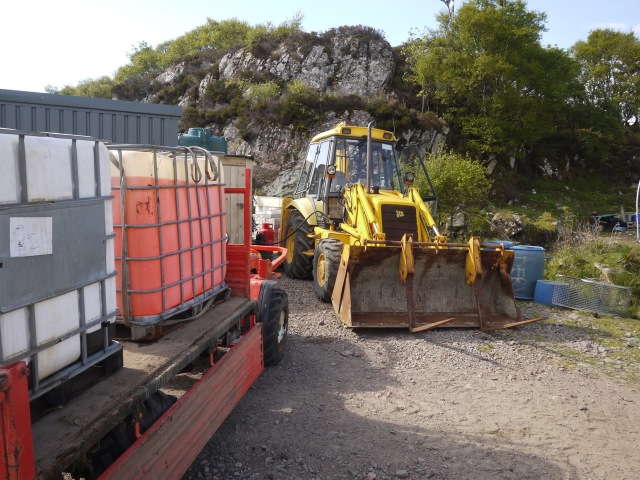 Had to empty the spare kerosene as we needed the  IBCs for more fuel coming. 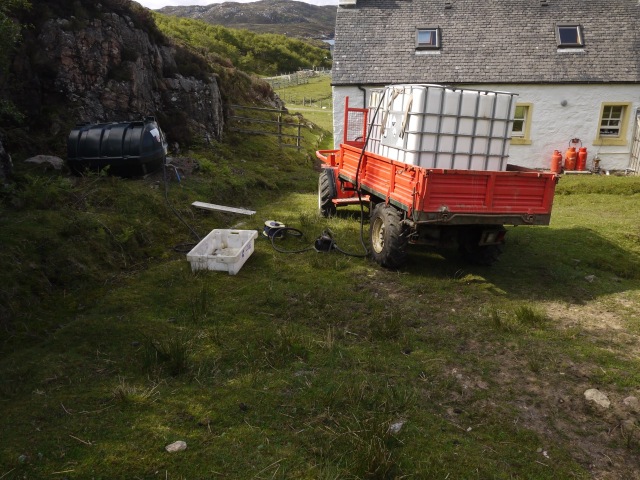 Just as well, the Lodge tank was almost empty when I had a quick check. I was aware that it needed a top up but we must have been burning a bit more than usual. 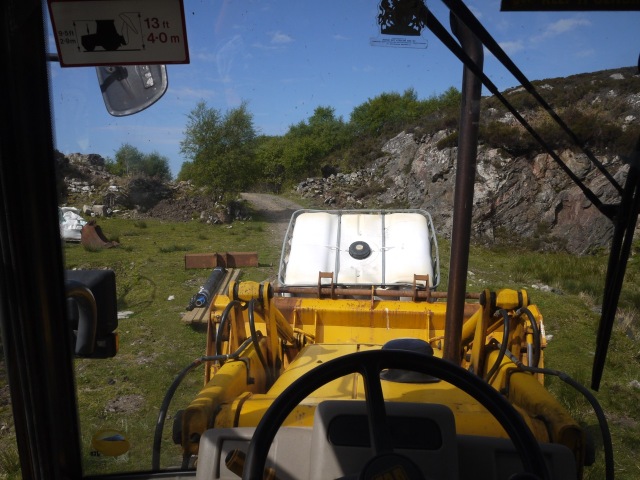 Down the pier with the third IBC

Two on the tractor and one by JCB down to the shore. 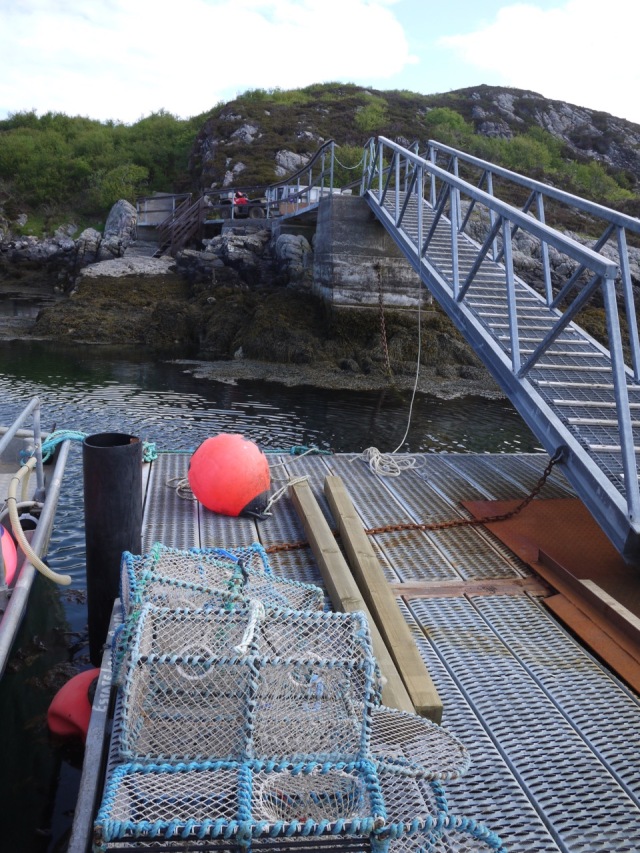 Kenny MV Seaflower was coming so I got some creels to the pontoon hoping he would put them together in between IBCs and tractors. 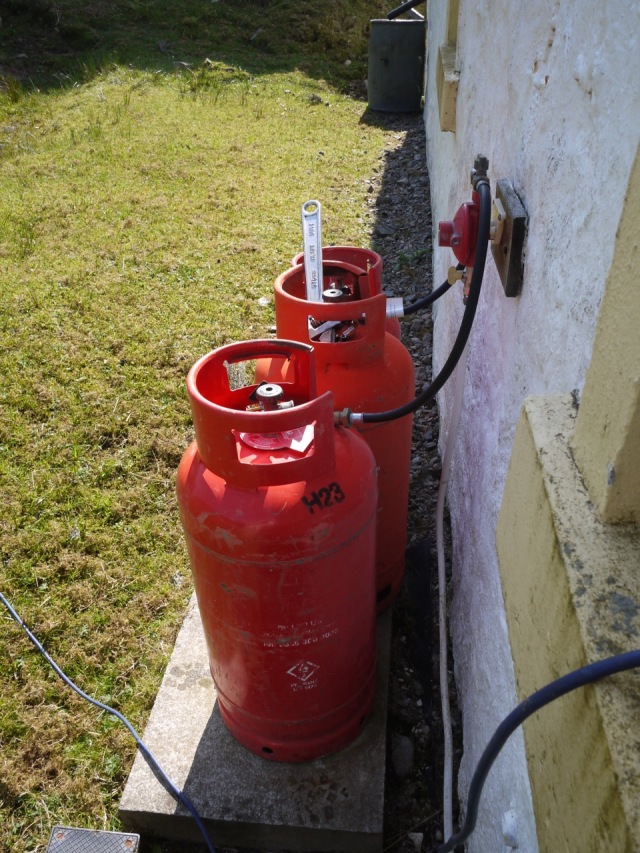 When I was loading the fuel in to the tank behind the Lodge I had a check of the gas and one of the bottles was empty too, another job out of the way.

Sorting the Bothy For Hugh, the Digger Driver.

Sorted out the Bothy for Hugh coming, we had it set up for the ‘Crew Pot’ meals we are doing so it had to go back to accommodation. I had an idea the road pipes would be loose so I put posts up just in case they were. 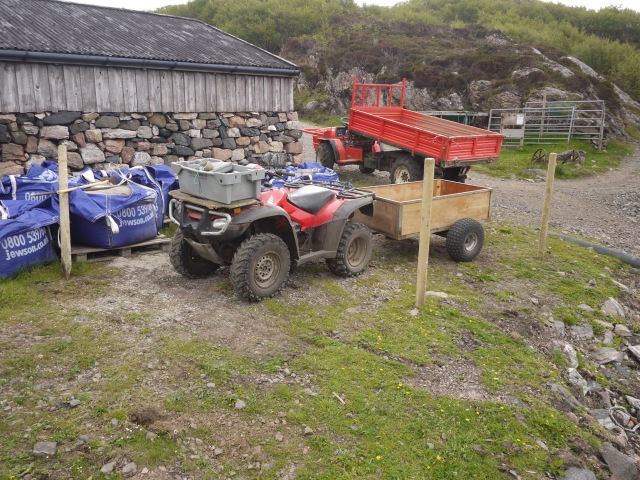 12.30pm the Spanish John arrived, all of a sudden the harbour became very busy. 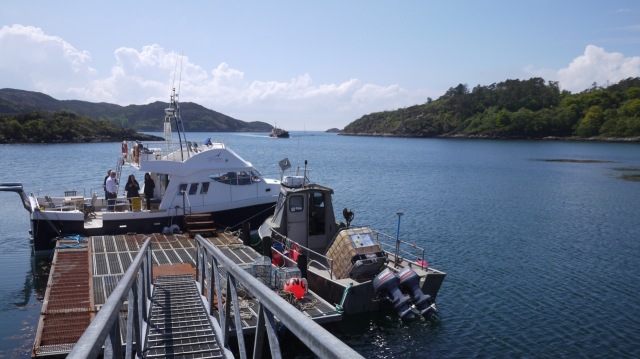 Kenny and Gemma’s passengers had had their lunch and headed off, we got on unloading the landing craft.

It is always a rush to beat the tide but it all went quite smoothly and we got the cargo off in good time.

Despite Hugh’s plastercast (he had done a bit of damage to his tendons) we quickly got the material up the shore, the landing craft was empty and heading off. 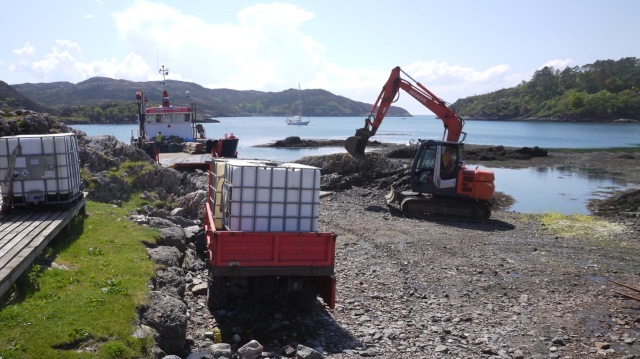 No worries, we have a good team. 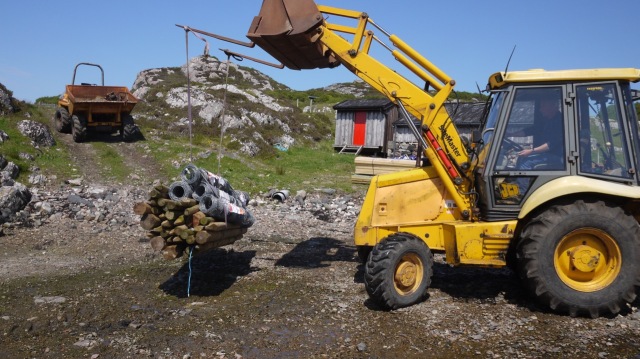 We always try to load up the Spanish John. All the projects start coming together following a delivery. 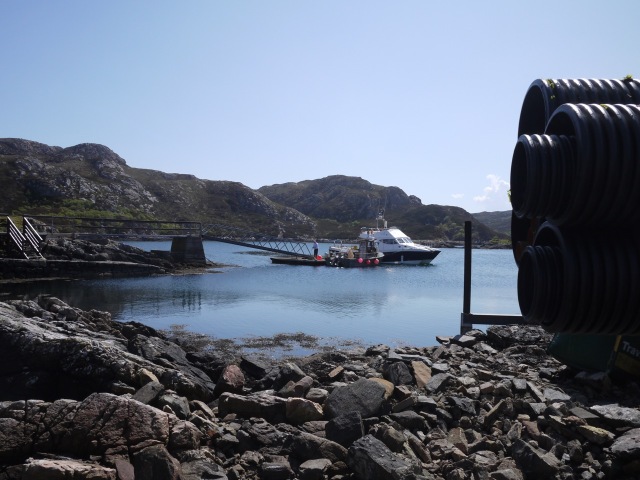 Kenny was setting up my creel line all the while we were unloading which was a great help.

The Drainage for the new Road

The road pipes were well tied up so the posts I put in were redundant. 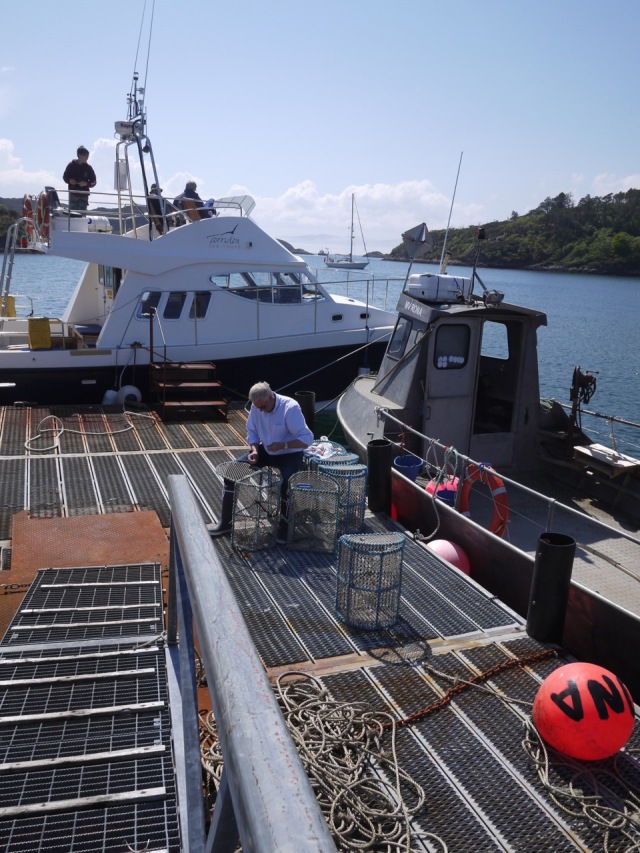 Kenny Gets Press ganged into Creeling, but happy at his work.

I had asked Kenny to have a look at repairing the creels but he very quickly put them together for a wee string of 6 for around the bay. Years of doing it makes for an easy task, whereas I would take forever and it would not be as tidy, for sure.

All the excitement was over quickly and Jamie headed off with the landing craft for a calm sail back to Mallaig.

Visitors Heading to the Rona Shop.

In between distributing the load the visitors had asked about the shop, so a quick break from the JCB and I put on my shop assistant hat.

Finally the digger got up to the front of the Lodge and was parked up ready for Monday morning.

The New Jeep, At Last.

I had gone to Portree a fortnight ago, on the way there I called Micky from M2 Motors and he pointed me in the direction of the Isuzu jeep. It was ideal for Rona and was very pleased to get such a good car. We were getting a wee bit tired of getting soaking in the winter and got the Diahatsu a few years ago but it has done very well and a replacement was really needed. Hopefully this one will be as good.

Late on in the afternoon/early evening there was a few jobs left to do and a welcome beer at the end of it. The fencing had been loaded and it will go up top to fence off the Scots Pine that the deer like to eat.

Creels on the boat.

I finally got round at the end of the day to loading the creels and hope to get them out Monday afternoon.

And finally let the sheep in to mow the lawn (saves fuel and energy) , just another day on the Island, PHEW.