The Days Are Not Long Enough!!

Here we are and it is Friday already, much achieved but much to do. The sun is shining again so this blog will be a quick one too, we have a full house coming tomorrow so it is a bit of a rush. Much better with some sun though

Way back at the start of last week the weather continued to be calm and blue skies, what a week, the PDG helo’ had a fly past checking us out. I don’t know who the pilot is at the moment but probably John MacKenzie from Dingwall who also owns a distillery. A good guy to know. Glen Wyvis Distillery, great Gin.

We had left the guests to settle in after Saturday’s pouring rain, it was a very wet arrival for these ‘Lesser Spotted Photographers’ and the honeymoon couple in Escape, but after the rain they had a week of calm sunshine, bliss.

We took advantage of Brian and Gill (yet again) and took off for a day trip to Portree to see Doctors, Architects, Garages and shops for the day. It was an early start but a lovely sail over, calm and cold. Our 200 or so seals were enjoying the early morning sunshine as the tide dropped. 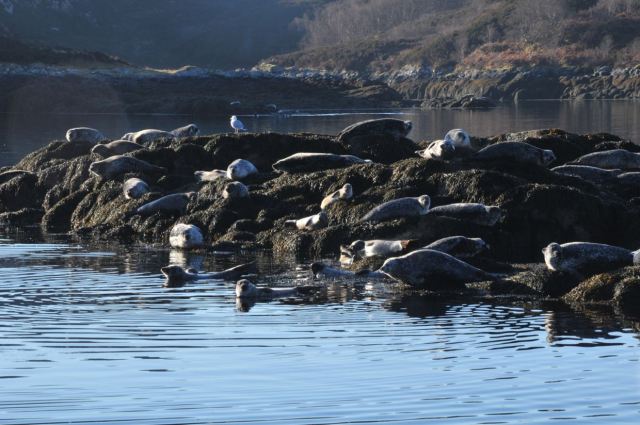 There was not a lot of sea life as we crossed to Portree, just the odd Porpoise although we did see one lying on the surface which was unusual. Just outside Portree we caught the shepherds gathering in their sheep pre-lambing I guess. Always good to see the lines of white strung along the steep faces and the dogs working them home. Not for the faint hearted. Often we see the sheep very high up and some we know get blown off in gales. They are fond of the cliffs here too and sadly we do loose some of ours on the cliffs.

Looking down to Raasay,  the Cuillins were quite hazy, the fishing boats were well North this morning so it was a quiet ‘Sound’.

It was good to get a day in Portree on MV aspire with no rush, usually if I go in our boat it is a mad dash before the weather gets up. It can change oh so quickly that after a few frights I’m always keen to get the shopping done and get back top Rona, prompt. 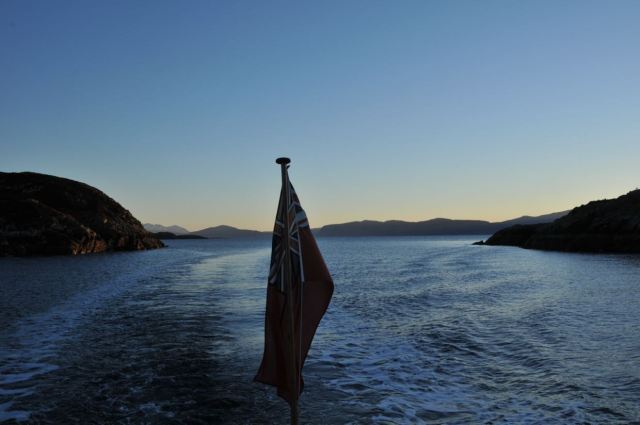 We had been in touch with Donald for some new hens and five had arrived in a carboard box as usual, they had come on the morning boat. The redundant dogs kennel was pressed into use and is now the new hen run. The hens are very comfortable and with a little adjustment it will become a permanent hen shed, no eggs yet for Easter.

As the week progressed the weather got steadily more settled and at one point temperatures were in the mid teens. JP was over for a weeks holiday and despite a horrible cold had come over from Dry Harbour to help L with IT problems, later on the rest of the guests arrived and we had a convivial evening at Rona Lodge, as we do.

Back to work and with Spring in the air Gill suggested emptying the Bothy of bedding to let it air as we tried to re-arrange the interior for our guests this year. The decking required a wee bit of work where I went through it taking the tractor onto it earlier this month, not a good idea.

All too soon it was Saturday our honeymooners, JP, Wendy, Brian and Gill our visitors and  assistants were away, they all had a better sail with calm dry weather which is always good. 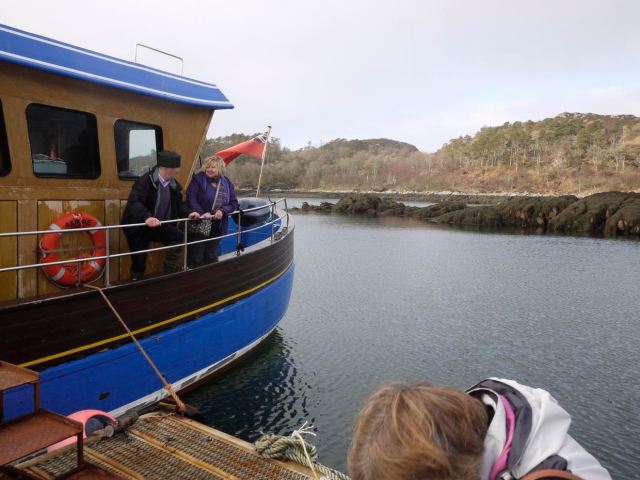 Once the weekend dust settled we were back to work, the seals were still hanging around, the Sea Eagle was upsetting the Herons and the Oystercatcher doing their usual noisy rounds of the Bay, we now have half a dozen. The wildlife had all come to life with the good weather. 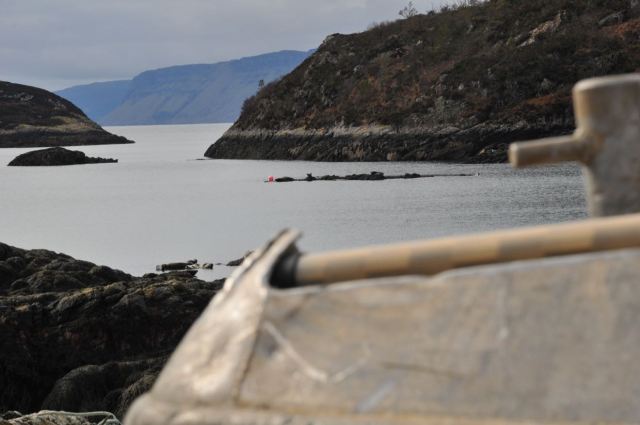 Sunday I took a trip over to shut down the cottages, check the services and a quick look into the genny shed, here we go again. Another diesel leak, what was supposed to be a quiet day turned into a days work. The diesel return was siphoning back down the pipe through the protective sleeve, we were lucky (or unlucky enough) to see it happening. I could not believe it but it forced me into sorting it out properly. 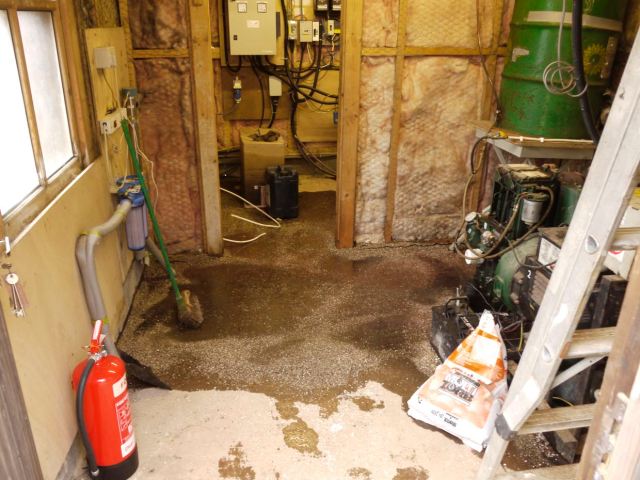 Oh No Not Again

I put the return pipe back to where it originally ran. The reason I had shifted it many years ago was that the Highland Cattle used to catch the two pipes in their horns as they went round the shed and that could have been a disaster. Fingers crossed the thing will work now.

We are not far away from lambing, the grass is in very short supply. We have lost a few sheep lately and sadly down to nothing else but the horrible winter weather they have had, certainly the survival of the fittest here.

Julie has taken to sitting down on the job waiting for her fight with the sheep for the feed. It is not good to feed the wild animals as they become too dependent, but when she first arrived she showed no fear and has always come to the feed, the other deer that arrived with her remain wild and only occasionally come about the house.

With lambing approaching I turned my attention to roofing the ruin in front of the house as a lambing shelter, store and to give the walls which we had rebuilt some protection.

I had been waiting for a hand to square it off and our friendly joiner Brian did just that. Makes life easier having someone else making the decisions. As it happened I got on quite well and have phase one finished although it will not be used this year. 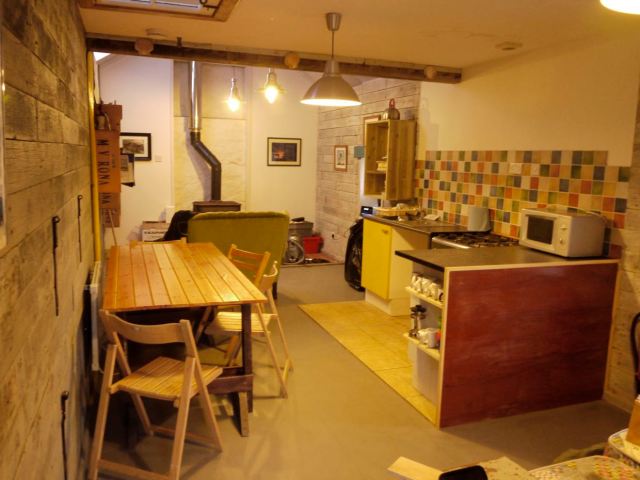 Back to the Bothy and we had nearly completed out renovation. A few things to do here and it will be good to go.

It was sunny this morning but as I write this the clouds have come in and it is pretty grey now, just like the other day when Yogi was rock hopping around Dry Harbour. He certainly knows all the corners around here.

Tomorrow will be a big day, heavy rain forecast so it will be fun, must go lots of prep’ to do.