All Quiet on the Western Front

No wonder, cold, grey, wind, gales and yesterday torrential rain. Our summer continues. Yacht numbers are way down. As of Sunday we have had 293 yacht visits, this time last year it was 403!!!!

This week is usually one of the busiest so even in the rain it was no surprise to see 8 soggy boats turn up on a Monday (yesterday). I have just had a chat with a couple here and they are like many that they have their fortnight planned and have just gone out, but if they were sailing local they say might have flown to a hotel in the Med’.

I’ve been up at the larder since Wallace left, our stalker had 3 stags this week and left me to butcher the last two. Yesterday the rain was stotting off the roof for half the day and the other half the midgies were trying to get through the door. But with the door closed and the radio on it was the best place to be.

Despite the weather our guests last week had a great time, yes it was not sunny but it was mostly dry and therefore midgie free (most of the time) which is a bonus. Paul and his family in the ‘Escape’ House had a bit of luck and caught two lobsters, almost as many as me this year. 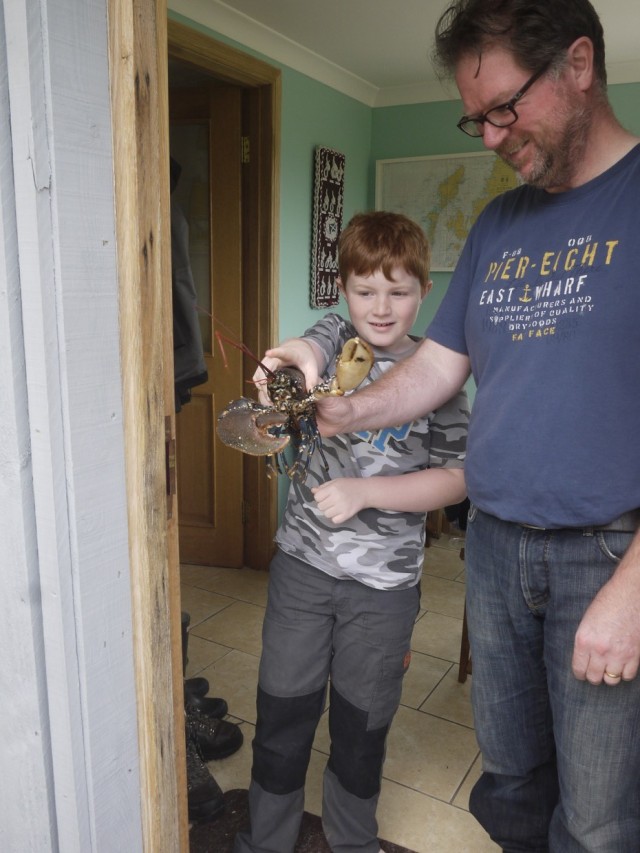 It was shaping up for a busy ‘long’ weekend, what with Claire going off, Yacht Strolla coming and a triple changeover. First up was Jane and John MacInnes arriving on ‘Strolla’ from Fladda, then a burst of yachts arrived, much to their amusement (and mine) they all anchored like sardines close to ‘Strolla’. With a whole bay to choose from it never ceases to amaze me why yachts feel the need to get so close to their neighbour especially when gales are forecast.

Yes, there are four Yachts there. Shortly after that Ali arrived from hauling a few fleets, we loaded Claire’s stuff onto the fishing boat and that was her on her way back after the month long challenge. We do not know what the total is she raised and I think the donation page on Facebook is still open for two months but I guess it will be well over £2000, hopefully more. She will have been glad to be home during this weekends weather.

I got Claire to take down her sign as a souvenir and then she was off.

Loaded up and Heading Home.

I had put the tractor over to Dry Harbour for the mountain of bags and Saturday morning we kicked off early as we (for once) were organised.

It was 2pm before L finished getting the cottages ready for the guests and we got home for dinner. John was up at the shed making legs for the boat and I had to continue butchering one of the stags. So it was straight up top after lunch and a few hours in the larder. 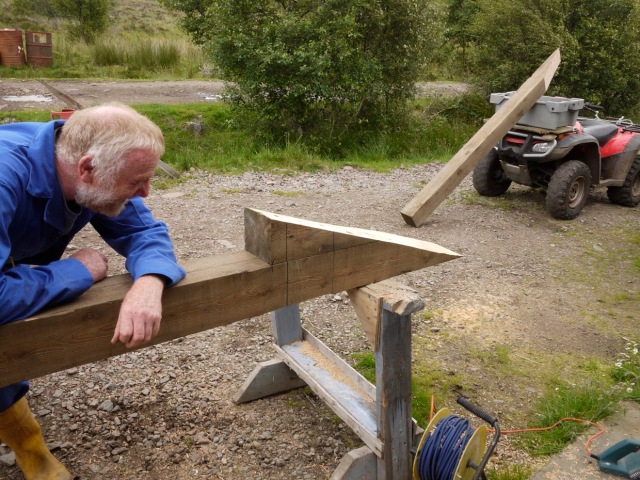 A Nice Of Pair Of Legs

On Friday L had remarked that one of the wild geese had been slow to get away when she went to the hens, as the weekend approached the goose got closer and closer to the house. It was plain to see that it was unwell or injured. It came and lay against the house during the Sat’/Sunday gale. We tried to feed it as it was very thin but it ate nothing.

It’s family kept coming to it and after three days it seems it is getting a wee bit better, it is now down in the field and it flew over the fence yesterday, hopefully it will survive although I’m not sure about the mess they leave around us.

All The Way From Finland

This year we have had quite a lot of foreign crews on boats, their anchoring skills are always a source of interest, these Finnish guys anchored then rowed out to the mooring and tied up to that as well. Seems a normal thing to do where they come from. It was a bit blowy when they arrived so maybe they were just making sure. I was amused to see that the umbrella was still in one piece despite the gale of wind. If it was not for the foreign boats and crews  we would be very quiet this year.

Last nights yachts are almost all away, heading out on a cool but dry morning. There is a bit of blue sky, thank goodness. After finishing the deer yesterday all that remains is the burgers and sausages. That is to-day’s challenge then catch up with the chores we have been neglecting these last couple of weeks.

2 Responses to All Quiet on the Western Front